Since we spent Christmas in St. Louis last year, this year we were able to stay home.

We spent Christmas Eve with my mom's side of the family at my aunt and uncle's house.  It was a really enjoyable night and Camden had a blast entertaining his aunts and uncles. 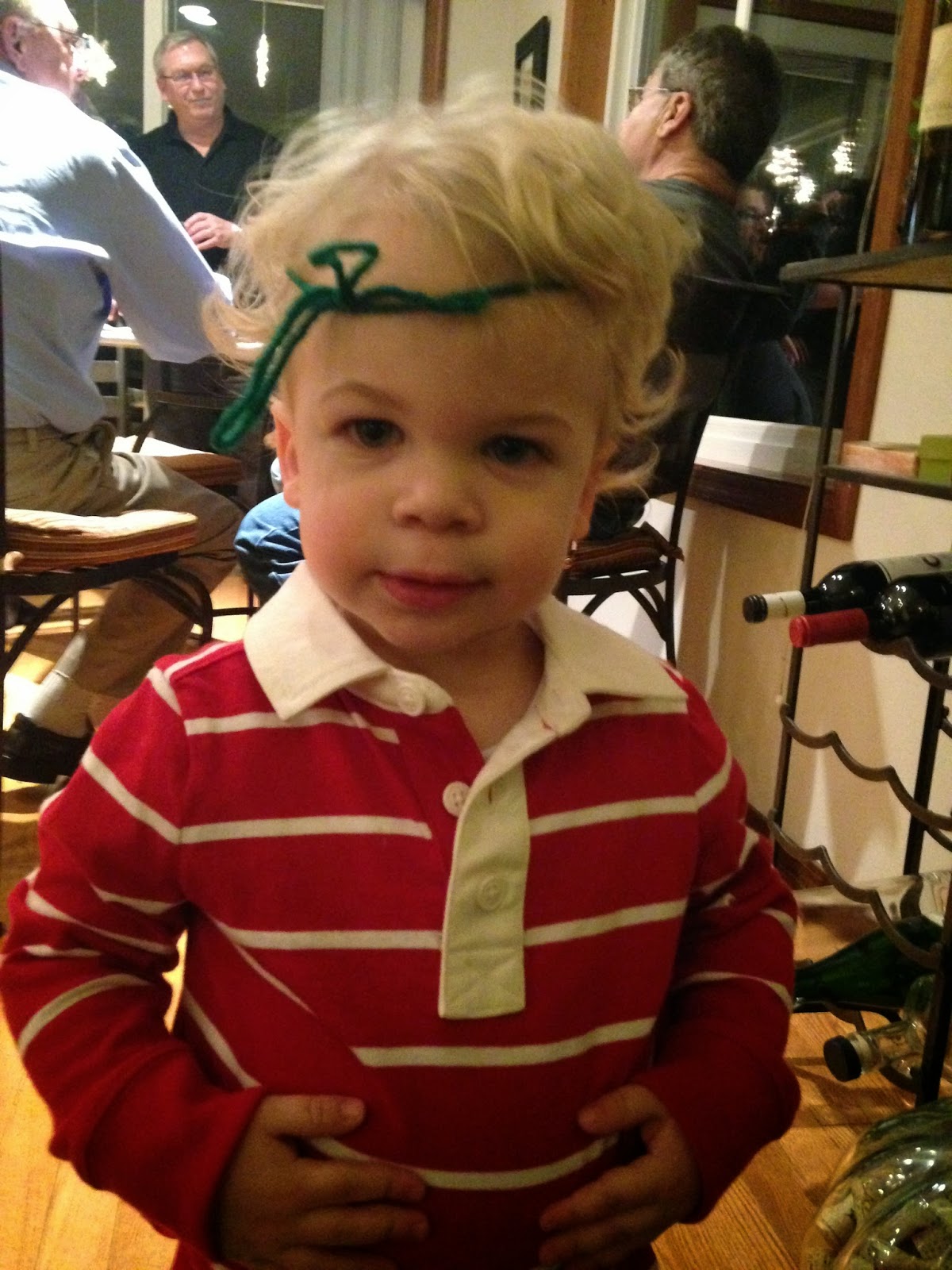 He was also wearing his new Minnetonka booties from his Aunt Tiff for the special occasion.  All the women in the room were swooning over how cute they were. 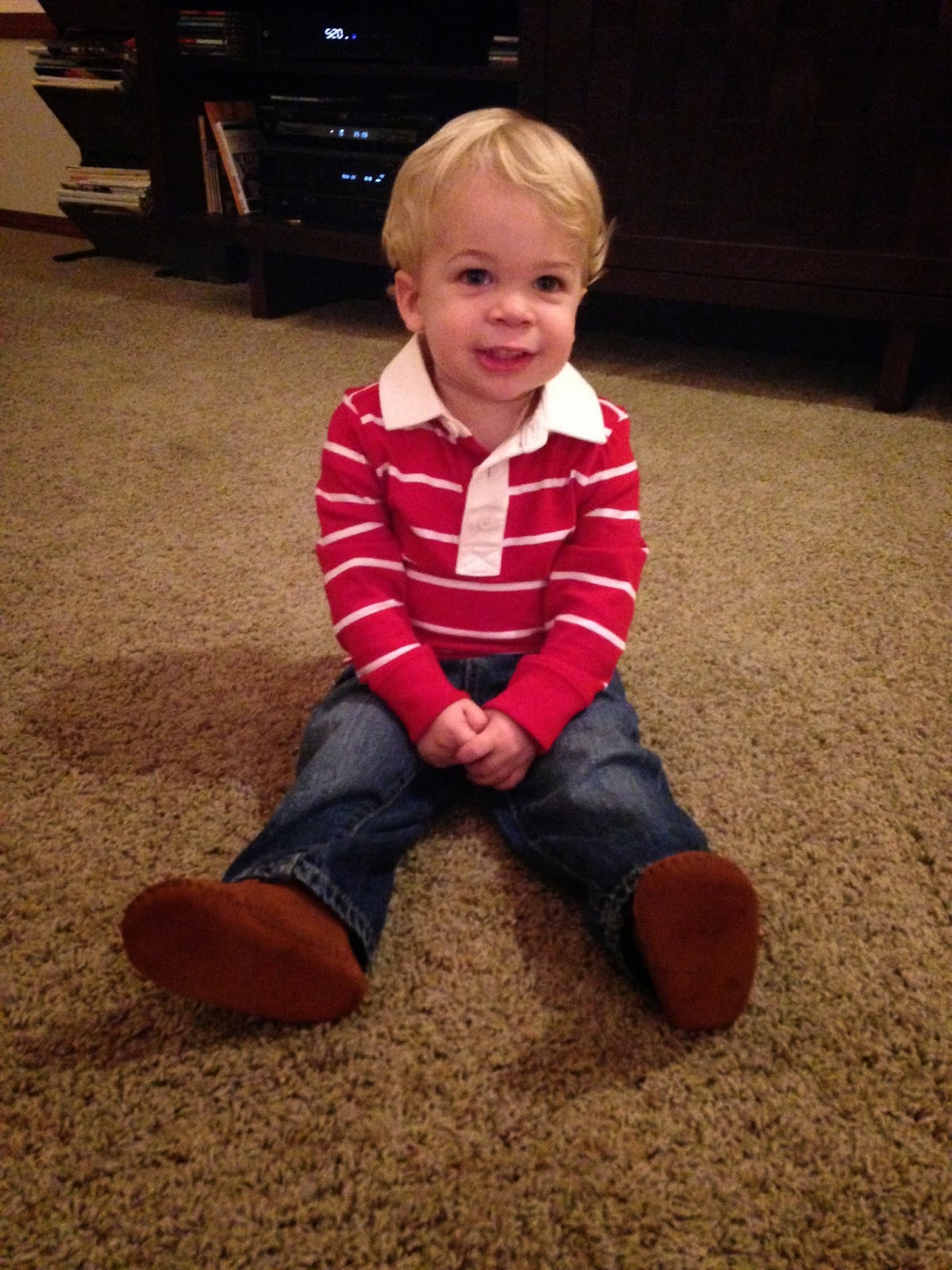 He spent the evening chasing Buster the cat, eating crackers with sour cream, playing with Buster's cat toys, and stealing my dinner roll. 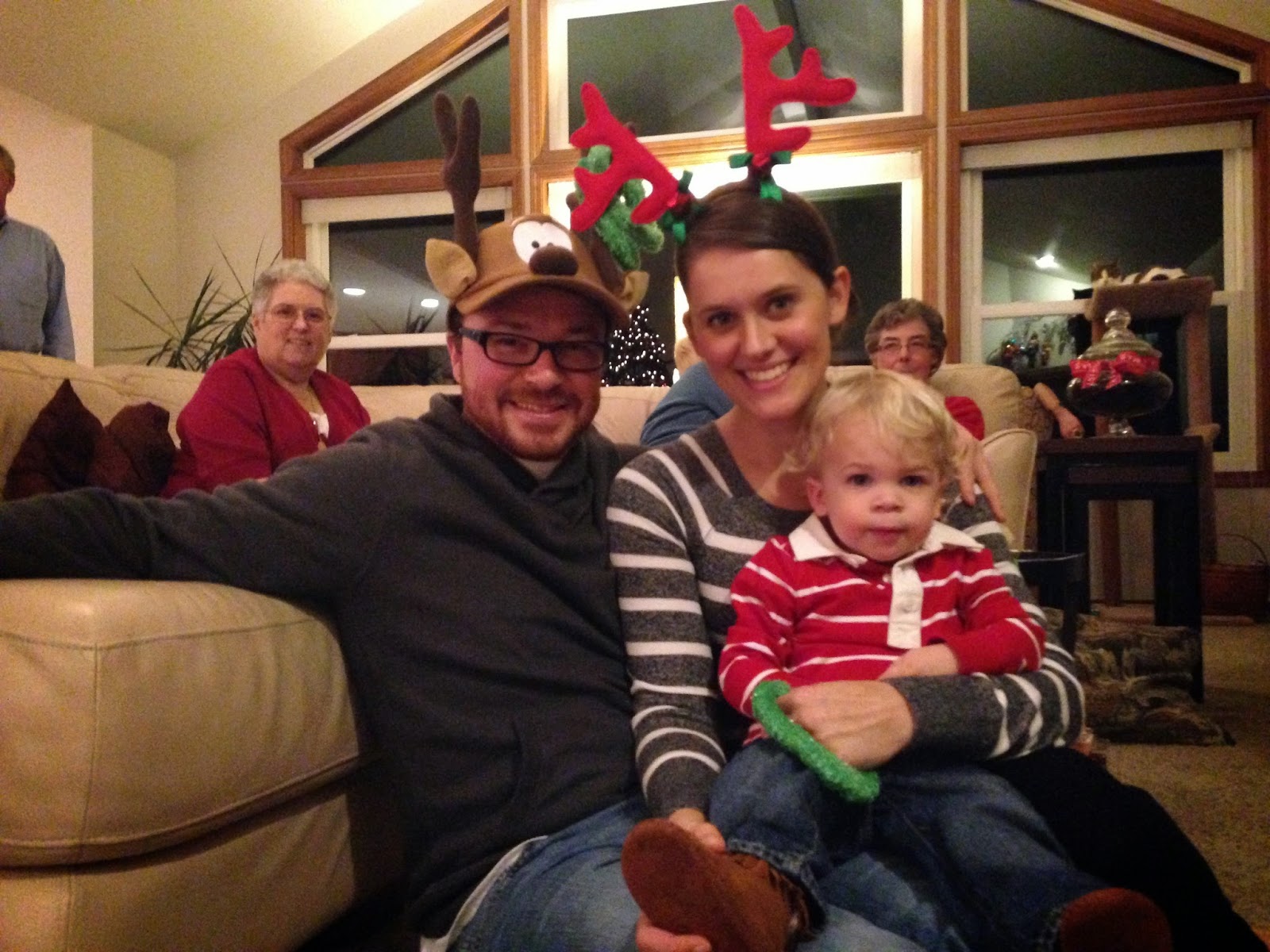 We put him down after getting home from the Christmas Eve party, while the adults stayed up playing dominoes.  After heading to bed around 10:30 and getting cozy, we heard Camden start rustling around, and soon - he was standing up and crying.  I didn't think much of it and brought him into bed with us - thinking that he'd snuggle up and fall asleep.

From 10:30 to 3:00 in the morning, I rocked and bounced him, laid with him on my chest, tried to let him get himself comfortable, and tried putting him back in the pack-n-play.  All big fat failures.  He wasn't even totally awake during all this craziness - just this zombie child that could not and would not fall asleep or lay still.

I have no idea what the problem was, but at 3:00am he finally fell into a deep sleep, laying horizontally (of course).  It's too bad we didn't have a video camera recording because someone, somewhere would have gotten a real chuckle out of seeing the position I was able to finally sleep in - curled up into a little ball, next to Sonny, at the bottom of the frigging bed.

The sleep didn't last because at 5:20am, the wild beast was awake and asking for Papa and Grammy.  Many a swear word went through my head, but I got up with the little booger.  I'm sure you're shocked to hear that we were the first ones up, so we waited for the rest of the house to rise (Grammy wasn't far behind us) and open stockings and presents.

This train loving child got tons of new Thomas trains, cars, clothes, books, and other fun toys.  Mommy wished there was a drive thru Starbucks in her stocking, but alas, there was not. 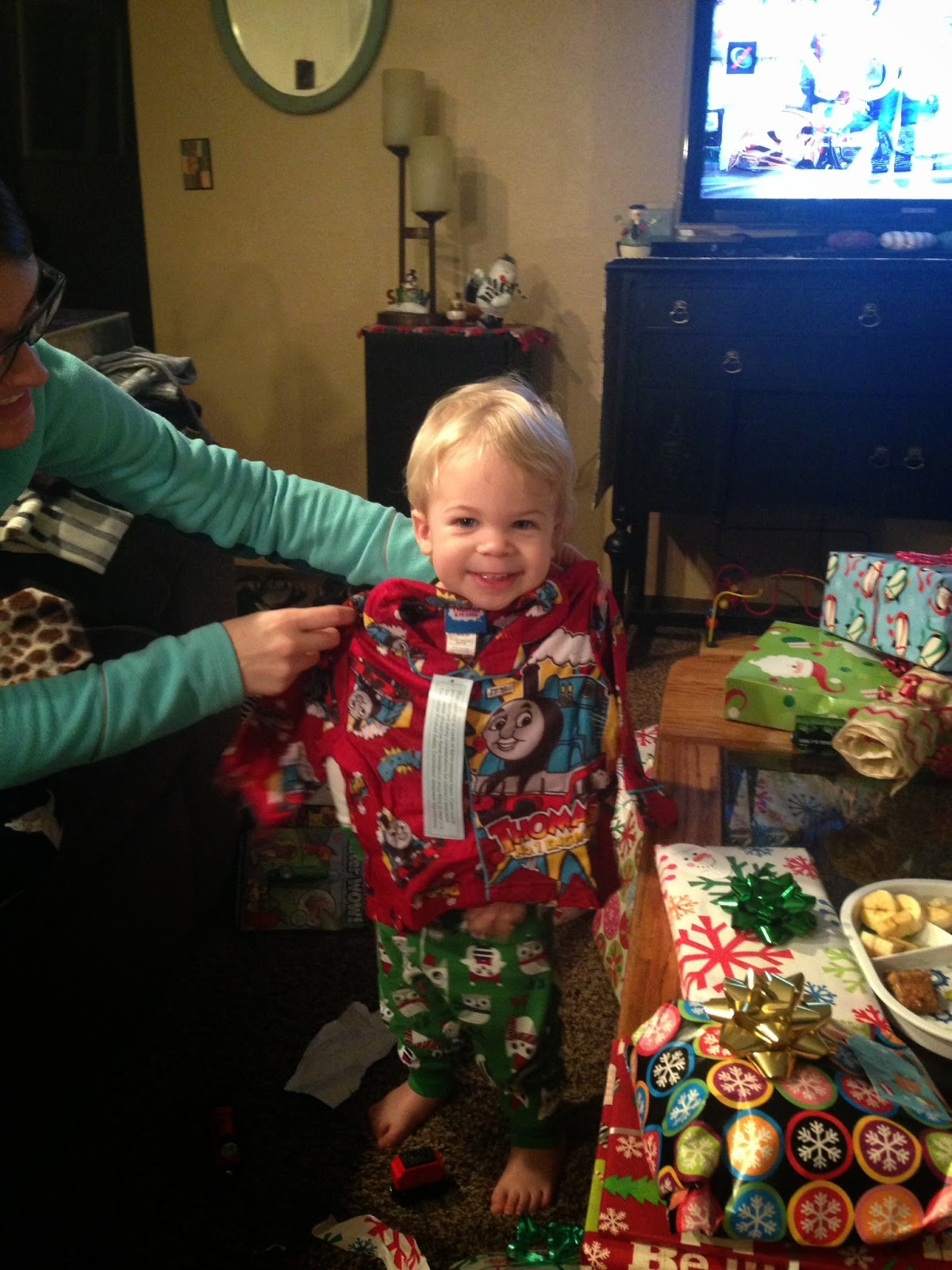 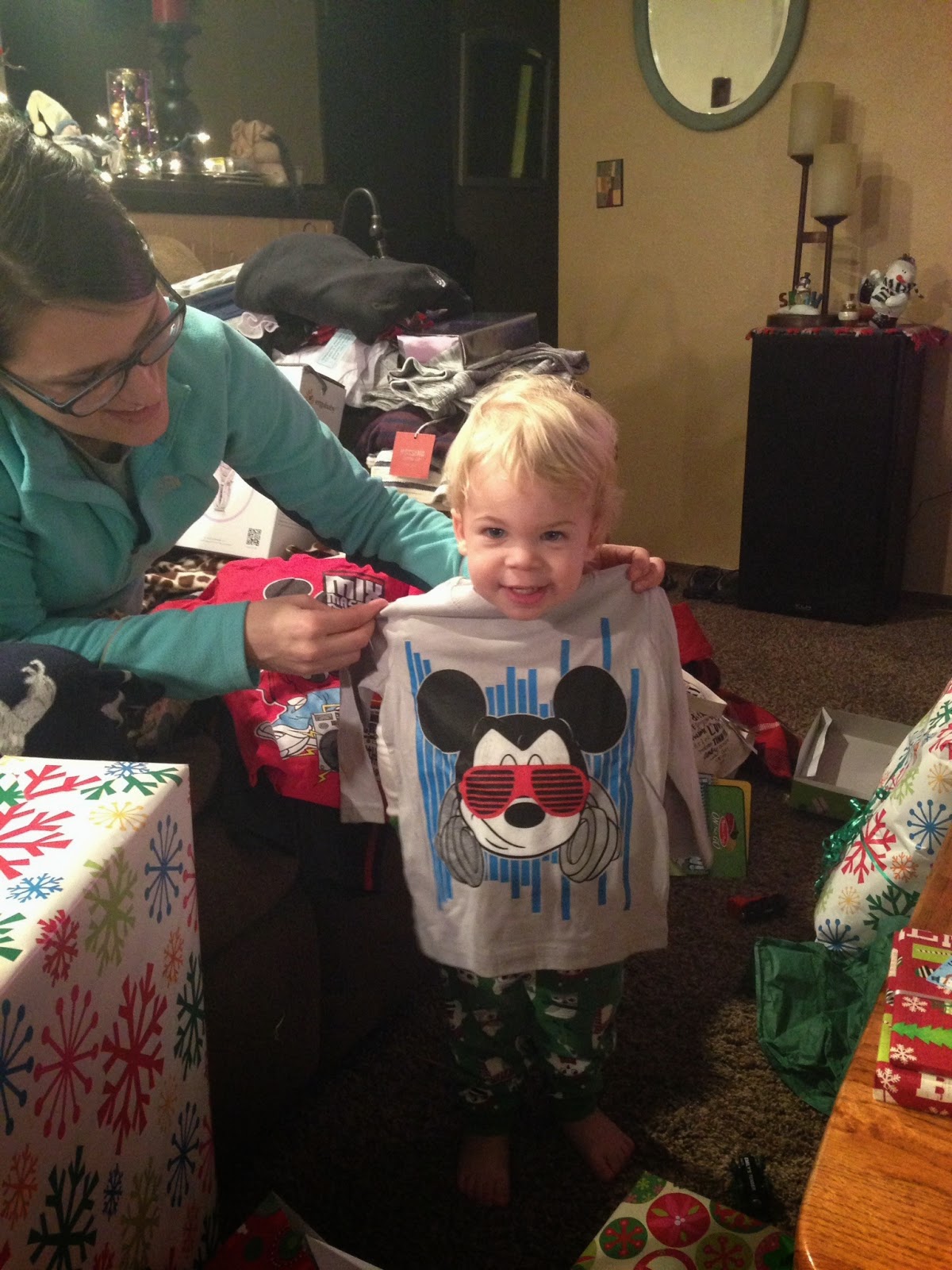 In my Taking Stock post I said I wanted Christmas Day to pass by slowly.  And holy shit did it ever.  It was completely wonderful and completely exhausting all at the same time.  Definitely a Christmas we'll remember.

Even though we couldn't physically be with Ryan's family, we communicated all day through texting and were able to FaceTime in the afternoon.  It was really nice to be at home and not travel for the holiday, but we missed being with them.

I guess we can start counting down until next Christmas, when we'll be traveling to St. Louis with a 3-year old and a 6-month old.  I'm pretty sure that Mommy will be wishing Santa brings her a beer helmet or something else that allows me to consume large amounts of alcohol.

Merry Christmas to all!