Warning: This post is allllll about potty training.  Stop reading if you don't want to hear about my kid's bodily functions.  I'm writing this mainly so I can document progress and have something to look back on when we go down the potty training road with Zoey.
I decided to take advantage of a long weekend and dive head first into potty training Camden. I've been reading a lot about it and asking moms that have walked this road before me. Almost all said that with boys, it's best to let them lead and to not push it before they are ready.
I felt like for the past several weeks, Cam has been showing signs of being ready, other than outwardly saying "I don't want to wear a diaper anymore."   He's been saying "don't change my diaper" after pooping, and immediately peeing in the drain of the bathtub on bath nights. Just this past Monday, he went pee on the potty for the first time.
To me, he seemed ready. As ready as he is going to be, anyway.
I bought and read the 3-Day Potty Training e-book and set off for Graceland, I mean, Target, for my supplies.
I bought Thomas, Minion, and Superhero undies, stickers, m&m's, matchbox cars, light-up bouncy balls, and little Minion surprise bags. I may or may not have also bought some extra carpet cleaner.  Ya know, just in case.
I was excited. Like, so excited I was dreaming about potty training.
I woke up early to make sure everything was ready to start the morning off right and re-read Lora's method.  Basically, other than encouraging patience, consistency, praise/reward and love - she stresses not asking the child if they have to go potty, but that the parent tells the child "Tell Mommy when you have to go potty!" so they learn the cues/signals from their body and can then rush off to the bathroom.  She suggests asking the child if they're dry as a way to praise and acknowledge their success before they even get on the potty.  (So far, at the end of Day One, I really feel like both those approaches/techniques are really helping.)
As soon as he woke up this morning I was making a big deal about him being a big boy, not needing to wear diapers anymore, and getting to wear awesome undies.   He took my bait and chose the Superman undies first. I was shocked because I thought for suuuure he would chose Thomas. 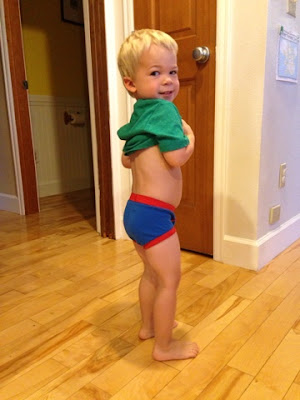 We started off strong with one successful pee on the potty. Soon after I could tell he needed to poop but was uncomfortable and anxious about doing it on the potty. I took him off and watched him very closely - and before long I could see that he was in his typical poop stance and ready. I scooped him up and rushed into the bathroom and was able to get it in the toilet. I hoped this would make him think he did it all himself and ease some of his anxiety. He peed in the potty again right after. 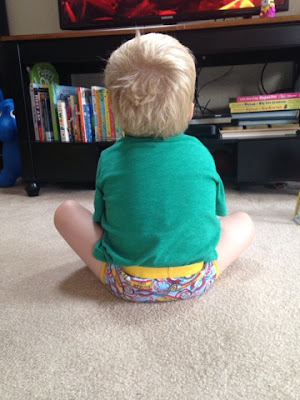 It was time for nap and after many attempts of getting him to pee before laying down, he was resisting. The method I read said to put him down for naps and bed in his undies and to not use diapers or pull ups or anything! Ha. Well, I gave it a go and after many trips up and down the stairs - I couldn't get back up fast enough and he peed while waiting for me at his door. I waved my white flag and put him in a pull up because I was exhausted and knew he was too.

He slept for two hours and I had to wake him up (because I never let him sleep past 4:00). It's always a double-edged sword. I wake him so he'll go to sleep but he's a complete grump. Anyway, Mister Grumpy was not happy with me and didn't want anything to do with the potty. This was evidenced by the four accidents he had over the course of the next hour.

Ryan came home from work and I was overjoyed to have some backup.  I wasn't frustrated in the least bit - just exhausted, and poor Zoey was not getting very much of my attention because I was so focused on Cam.

The kid came back around and had two more successful pees in the potty in the evening.  Even though I washed off his legs after his accidents - the kid needed a good bath. 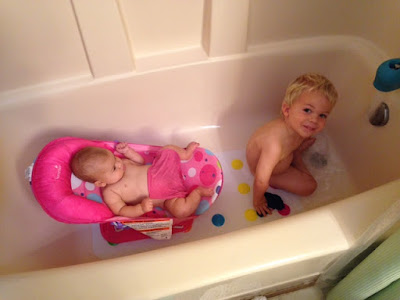 I didn't hesitate one second to put a pull up on him at bedtime.  The pull ups have Buzz Lightyear on them and he said "That's my Buzz Lightyear to the rescue?!"
As I was typing this I heard him upset and crying from his room.  I went in to see what the problem was and he had grabbed a pair of clean (but worn) undies out of his laundry basket and was sobbing "I need to wear dees!"  I'm not convinced he would keep those babies dry so I compromised and put them on over his pull up.
End of Day One tally:
#1 Successes: 4
#1 Accidents: 4
#2 Successes: 0
#2 Accidents: 1

Hoping for his typical good night's sleep and I'll be interested to see how wet his pull up is in the morning.
I bet you can't wait for tomorrow's update on Day Two.