Four months old and it's going by lightning fast... blah, blah, blah.  I know.  Why is it that each kid seems to grow up faster than the one before? 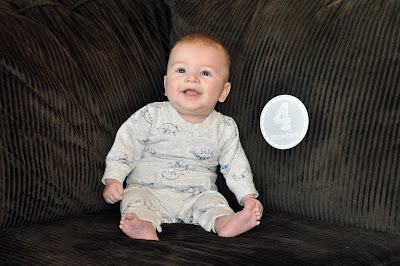 - We started supplementing formula and it has made a huge difference for his growth and his little bod.  I mean - look at those cheeks!  The first thing his pediatrician said at his four month well check was "where is his neck?!"

- Is so engaging.  This kid just smiles and laughs and babbles non-stop

- Thought he was starting to favor me looks wise? But now I just see Ryan (and Zoey)

- Drools more than the previous two kids combined, I swear

- Is the most ticklish baby I have ever seen or met

- Getting super close to rolling over from back to belly but get stuck on his side because his head is so big.  And it's not really "that" big but compared to the rest of his body proportions -- it is.

- Is a really good sleeper (knocking on all the wood) and will sleep anywhere from 10-12 hours overnight.  Naps have much improved too and they are anywhere from 1-3 hours

- Eyes are still a dark gray/blue.  Ryan thinks they'll go blue but I think they'll go brown
- Started daycare at Ms. Debbie's and has done so well with the transition.  He gets so much love and attention there from the teachers and the kids - it is no wonder he doesn't miss me

- Could be a serious competitor if there was a competition for the most wonderful baby in the universe.  I'm biased (I KNOW!) but he is just the best, best, best 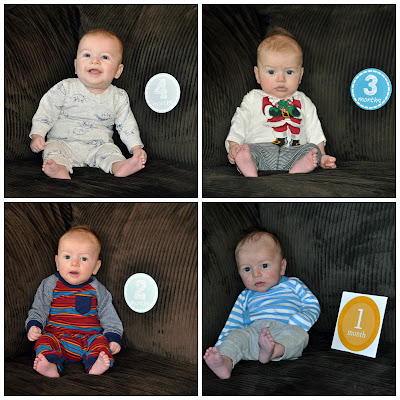 Posted by Lauren Peters Blog at 10:00 AM No comments: