Traveling with an Infant

Traveling with an infant is no joke.

Did I mention we were flying to St. Louis for a wedding?  Mmhmmm.  With our very active and wiggly six-month old lap child in tow.

I must have started my lists of things to pack for Camden two weeks before we headed to St. Louis, and continued to pour over these lists until the morning we left for the airport.

It wasn't so much our checked bag that I worried about, but what we were going to arm ourselves with on the nearly four hour flight over.

After talking to other mamas and reading several websites with tips for traveling with children - I felt prepared and also a little frightened.  Camden is a very happy and easy going little guy, but has become very active and wiggly in recent weeks, so I worried about how he would deal with having to be held and corralled for all that time.  In a small enclosed space.

Of course I wanted to be prepared, but I also didn't want to be schlepping a ridiculous amount of baby equipment through the airport.  So, we packed a few toys and books - some new and some old.  Even though I really wanted to bring a particular noisy toy that I know he loves - I decided against it.  You are welcome, fellow passengers. 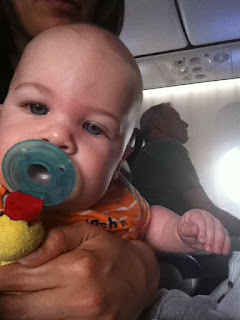 A particularly wise mama-friend of mine told me not to underestimate how entertaining certain airplane features may be to an infant or small child.

She was absolutely correct.  The tray table, plastic drink cup, window shade, seat belt, and arm rest all provided entertainment.  For about two minutes.  And he mostly just wanted to gnaw on those particularly gross airplane features.

Thankfully, he slept for about an hour and a half of the flight to St. Louis, and about two hours on the way home.  It was completely exhausting on my arms and body to hold him for that long, and in an upright and locked position - but really, I didn't mind the extra snuggle time.

Our flight home had a little hiccup - a two hour delay due to the fantastic Midwest weather gracing us with a good storm right before we were due to take off.  Of course, Camden would have fallen asleep on the plane had we taken off on time.  Instead, he slept while we waited and was then wide awake while we were taking off. 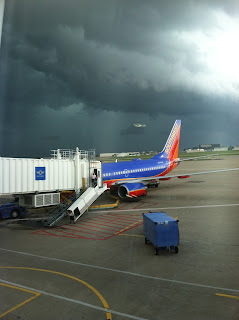 He had a few "moments" on the flight home (thanks, stupid weather!), but we were able to quickly settle him.

On both flights, we didn't hesitate to break out in his favorite songs, "Happy and You Know It," and "ABC's," and sing them to Camden as quietly as possible.  Although, I'm pretty sure that about halfway through the flight home - I heard the gentleman across the aisle from me humming the tune to "ABC's."  Sorry, sir.

I lost count of how many fellow passengers gave us the "oh, no - not a baby on my flight," look.  But, I can confidently say that I think he proved them all wrong.

Hopefully I'll have another great report to share when I fly with him solo back to St. Louis for Becky's wedding in November.

The photog-wannabe in me decided that we needed to have a little six month/Father's Day impromptu photo shoot in the front yard yesterday.

Outfit changes were quick.  Props were minimal.  My subject kept putting his chubby fingers in his mouth.  And said subject kept falling over from his sitting position. 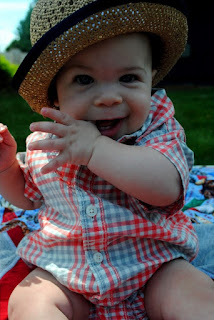 It was when Camden spit up out his nose AND mouth that I knew our front yard photo sesh was toast.

He proceeded to cry for a good 15 minutes.

Six months.  Half a year.

Time is cruel, people.  But, as a good friend pointed out to me today - it's all wonderful, and each age/stage gets better and better.  Well, mostly better.

He did see the doctor recently so I can report that he weighs 15 lbs 12 oz.  I think a majority of that is in his cheeks, tummy, and thunderous thunder thighs. 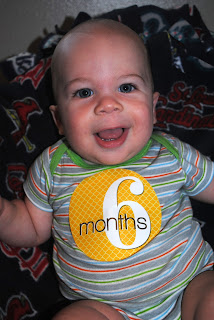 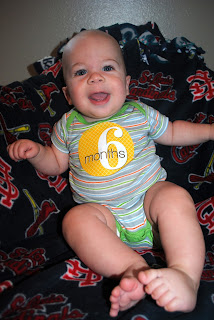 I can't say enough about my little love.  He certainly has his moments with teething, but overall he's just happy as can be and so fun to be around.  No wonder I have such a hard time leaving him every day.

He's still rocking two teeth on the bottom - but I think a third is not far behind.  He's over turning circles and scooting on his tummy and in full on mobile-mode.  He scoot-crawls and follows me into the kitchen and down the hallway like it's no big deal.  The little daredevil also tries his hand at yoga (downward dog), and gets up on his tip toes when in the crawling position.  The little rascal is still unsure about baby food, but sure loves his lovey and his special "Hammy Cammy" song.

On Monday afternoon I left him playing with a flip-flop on the edge of the living room and kitchen.  I quickly went to use the bathroom and came back just in the nick of time to see he had moved into the kitchen and pulled the (full) doggy water bowl all over himself (and all over the floor).  His arms were stretched out far enough so the water missed his face, but this poor baby was soaked.  Soaked, I tell ya.  And he was NOT happy.  But I thought it was hysterical and was laughing quite hard as I scooped him up.  I know - mean mama.

I am lucky to be your mama. 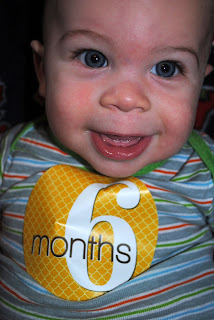 10 on 10: 10 pictures on the 10th day of the month!
Document a snapshot of your life & find beauty among the ordinary things in your day!
I worked from home today so Hammy Cammy and I had lots of photo opportunities. 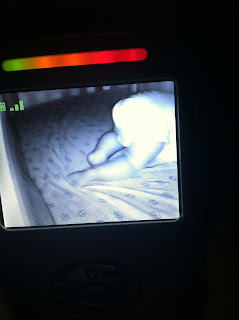 [2] He stared at the TV for a good minute.  The screen was black. 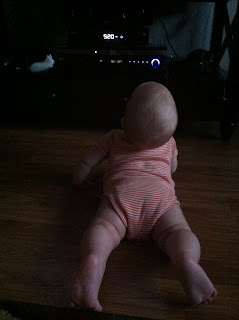 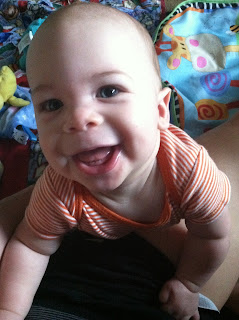 [4] His chubby toes finally touch the bottom of his exersaucer. 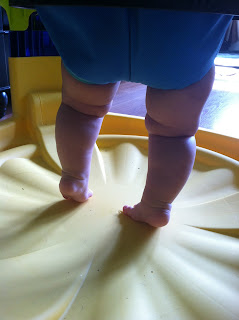 [5] Can't believe it's time for these two things to happen. 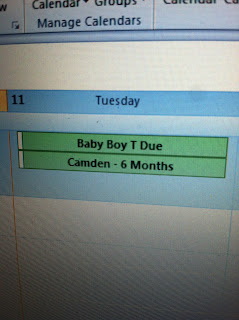 [6] It's more fun to play the piano with your head. 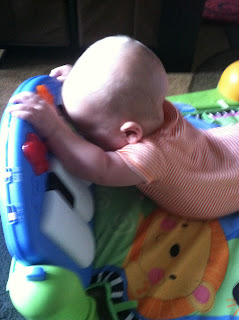 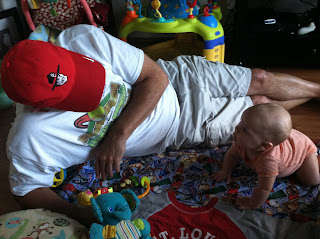 [8] Batman likes to look at hisself in the mirror. 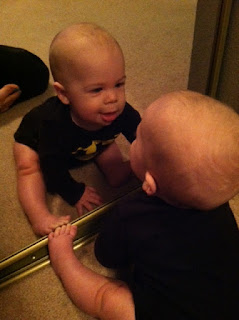 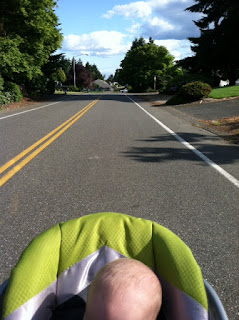 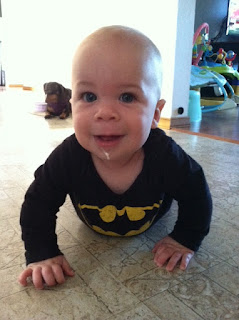 Email ThisBlogThis!Share to TwitterShare to FacebookShare to Pinterest
Labels: 10 on 10, Photography

My mama heart is full.

It's full of about 90% happiness and 10%... well, you know - big-ugly-crying-face-where-the-hell-did-the-last-(almost!)-six-months-go-and-why-is-my-baby-growing-up-so-fast sadness?!!!

These last two weeks especially have been full of milestones for our little man child.  And while all of these milestones are exciting and make me happy to know that he's growing and thriving... I can't help but feel a giant heap of sadness too.

I know I am not the first mama to feel this way - and certainly not the last.  But I would just like to say touché to everyone that told me how fast this all goes.

In the past two weeks, Camden has decided that just laying and playing on the floor is boring.  Army crawling and scooting all about the living room is much more fun. 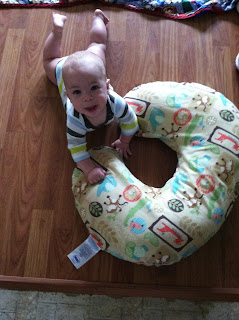 (That wasn't where I left him)

Around this same time, we thought we'd try giving him some rice cereal - just to see what he'd do. 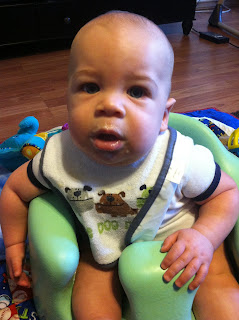 Poor guy knew how to get it off the spoon but was pretty clueless how to 1) keep it in his mouth and 2) get it into the back of his mouth.

(I'm actually very OK with him not being ready for solids).  Shocking, right?

And finally, after a couple weeks of teething and watching his poor little baby gums get puffier and puffier... 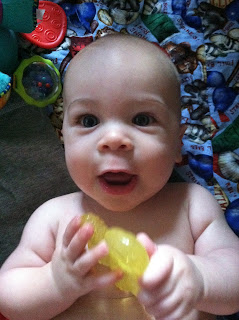 His two bottom teeth poked on through on Tuesday while I was at work. 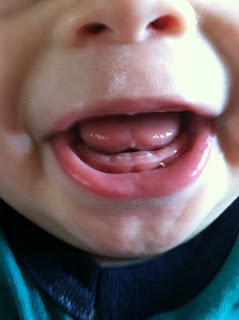 And, by the grace of God or other deity - Tuesday night he slept entirely through the night for the first time.  No matter that it hasn't happened again since.

So, you see what I mean?!  Change and progress is rampant in this household.

Just yesterday I messaged a friend about taking some 6-month pictures of Camden.  She is pretty busy this month and it won't work out (due to poor planning on my part) - so I suggested planning to take some around his 1st birthday... And I'm pretty sure I threw up in my mouth after I realized what I had just typed.

I'll be interested (OK, afraid) to see just how divided my mama heart is between happiness and big-ugly-crying-face-sadness when his 1st birthday comes.

I never used to think I was perfect.  And for the record - I still don't.  I give my best (maybe to a fault sometimes), but am happy to have my flaws.  Some more than others, of course.

So it's funny that upon experiencing my biggest life change that I decided I was going to become Mary-friggin-Poppins.  Practically perfect in every way.

I'm pretty sure you can guess how well that worked out.

Thankfully, I got over this newfound sense of perfection shortly after Camden was born.  I got really good at surviving and just getting by, knowing that this would all get easier over time.  But then this idea of perfection reared its ugly head when I headed back to work.  I would be so relieved to be heading home to pick Cam up, but the second I walked in the door - I would get hit with this invisible cloud of stress and panic and the feeling that I had so much to do just to get ready to do it all again tomorrow.

I had to do it all.  Myself!  And fast.  Because it was only a few hours before baby (and I) needed to go to bed.

My breaking point?  Sitting on the floor in our living room, pumping, sobbing, and while talking to Ryan -  hearing him tell me, "You aren't the girl I married.  You're her, but you're not her."

It wasn't mean.  It was true.  And I knew it was true - which I think made it even harder to hear.  It was then that I realized I am not Mary-friggin-Poppins.  Not even close (unless you count the seemingly bottomless diaper bag that holds oodles of baby toys).  I can't do everything perfectly.  At least not without going batshit crazy.

One of my favorite things about myself was that I used to be a very relaxed and carefree person.  But I had turned into this very un-relaxed and stress-ridden person.  Obviously, I was putting a ton of unnecessary pressure on myself.  I think it all stemmed from a good place - wanting to get things done so I could spend quality time with my boys. Regardless, the person I was becoming was not good. Not good for me, Ryan/our marriage, or for Camden.

Since that night, I've been working really hard to not sweat the small things and just be the girl that Ryan married.  He obviously liked her.  And I liked her too.

Now, I'm determined to be my own Mary-friggin-Poppins.  Practically imperfect in every way.