Happy (belated) Mother's Day weekend!
As I mentioned in my post yesterday, Ryan and I spent the weekend in St. Louis with his family and our friends.  When we bought the tickets to come into town for Clare's wedding, we knew we wanted to try to surprise and grace his parents with our presence.  What we didn't realize (until about a week before we left), was that Sunday was Mother's Day and we would get to spend it with Ryan's Mom.
So began our scheming for pulling off a great surprise.  With the help and sneaky planning of Ryan's sister Cara, we decided that Cara would pick us up from the airport and bring us along to a dinner outing that Cara and Webb (Ryan's brother-in-law, Ryan - he is called Webb to avoid confusion) would be attending with the parentals.  Ryan told Cara he really wanted to eat at Bully's, a local barbeque place in Columbia  As it worked out, Webb was sworn into the Missouri State BAR Association on Friday morning and Cara had planned a "congratulatory celebration dinner" with their extended family at Bully's.
Our initial plan had been to keep this a surprise from Ryan's entire family (Cara and Webb excluded), but Cara felt (and I think she made the right call) that she needed to give their Dad a little warning, so their house could be ready for company.  She spilled the news on Thursday night, and from what we hear, it was a torturous 24-hours for Danny (Ry's Dad) to keep this secret from Chris (Ry's Mom).
Friday comes and we land in St. Louis.  Cara picks us up as planned and we make our way to Columbia.  Dinner was at 6:00, and we were running about 20 minutes late.  Cara had told Chris that she was stuck late at work and that she would be there as soon as possible.  When we were about 10 minutes away from the restaurant, Cara got a text from Webb saying "Where are you?  The suspense is insufferable!"  Classic, Webb.  Classic.  That text was followed up with directions to "Park on the east side of the restaurant..." to make sure nobody saw us through the windows. Thanks, Webb.
We parked the car and Ryan called Chris's cell phone.  So they chit-chatted while we walked into Bully's.  Everyone else at the table saw us, had big dopey grins on their faces and Chris just kept chattering away on the cell phone, until Ryan told her to turn around.  The look on her face was priceless and wonderful.  I think she hugged us each three times before we sat down.  Danny was crying, but its debatable if he was crying tears of joy for seeing us, or tears of joy for not having to keep a secret anymore.
Fast forward to Sunday, and Mama's Day!!  We started the morning with breakfast at a local restaurant.  Apparently I do not know how to read menu descriptions clearly and was unaware that the Southwestern Breakfast Burrito had scrambled eggs inside.  After a few attempts to choke it down in hopes of not disgracing my in-laws at my picky eating, I just had to give up.  I gave it a valiant effort, though.  I think when my eyes started watering they got the picture that eggs and I are not friends.  After breakfast we headed to Ryan's parent's house to play some Washers and Dangle Ball, and just spend time as a family.
I am so happy that this weekend happened to be Mother's Day.  I felt bad that we couldn't be with my dearest Mama, but she gets to see us whenever she wants to and I know she understood.  We left her the best Mother's Day gift though - an entire weekend with Brock and Sonny.  Who wouldn't want that? 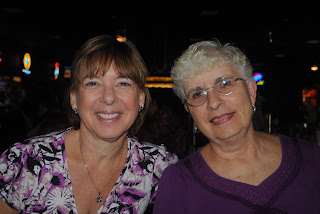 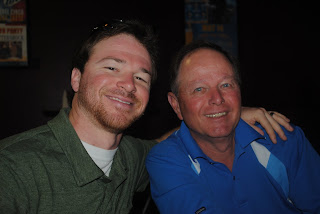 Ryan with his Dad, Danny 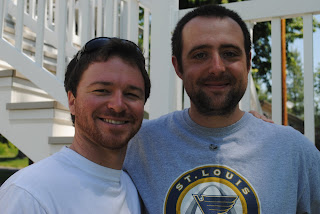 Ry with his cousin, Jeremy 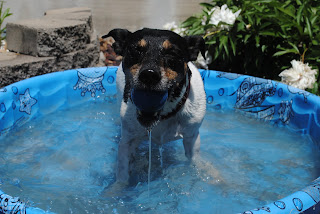 Ranger in the pool 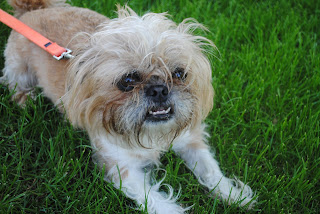 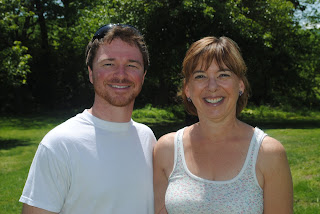 Ryan with his Mom 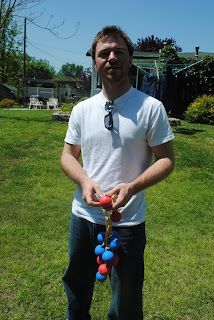 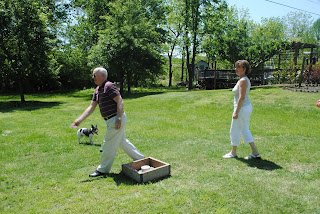 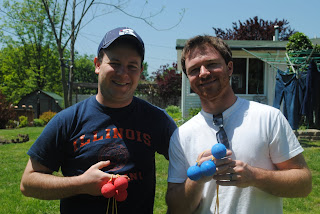 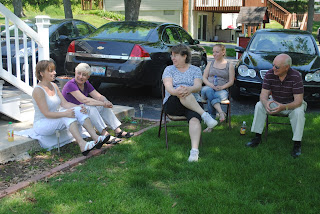 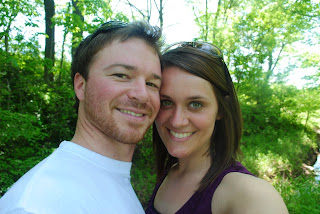 The lovebirds by the creek 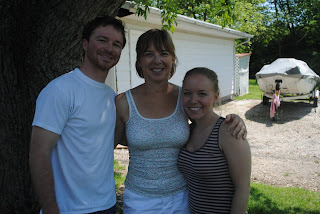 Chris with her kids on Mama's Day
We had such a great weekend.  I wish we lived closer to each other so we could have these visits more often, but maybe someday!  Only 16 days until Cara and Webb head up here for their Memorial Day Weekend visit, and 44 days until Danny and Chris come for a week!  Like I said yesterday, we have a lot to look forward to this Spring and Summer.  Woohoo!
Take Luck,
LP
Posted by Lauren Peters Blog at 6:00 PM