I probably should have made this my first official "Flashback Friday" post, instead of first dictating Ryan's proposal.  I am a fairly (ok, really) organized person, so I am a little surprised that I didn't think of sharing our story in chronological order.


Moving on.
I think I've mentioned before that Ryan and I met while working for Wells Fargo Financial in Fairview Heights, Illinois.  Somehow we were both duped into accepting positions as Credit Managers.  I think it all sounded good during the interview process, but the actual job was a completely different story.  Let's just say I cried during the first week.
Yep.
Of course since it was my first day on the job I was excited about the new endeavor and eager to learn.  I met all my co-workers and they were probably thinking, "Why in the world is this girl so excited and... Happy??"
I knew Ryan was special from the very beginning. And if you ask him, he would probably tell you the same thing (at least I hope so).  He has told me that when we met and said hello for the first time that day, it went something like this:
Me: Hi, I'm Lauren
Ryan: Hi, I'm Ryan... I love you.
(He said the "I love you" part to himself)
I say I knew Ryan was special from the very beginning because it was so easy to see that he was a good guy.  He was beyond nice and courteous to Wells Fargo customers when they called or came for an appointment, and his laugh and smile made my head turn and heart leap.  Our friendship remained a friendship for awhile, since we were both in relationships with other people, but our respective relationships ran their course and didn't work out.
I distinctly remember a particular morning when Ryan had just parked his car in the parking lot as I pulled up.  Looking back, its hard to believe that he actually showed up before me for once, but that's beside the point.  When I saw him, I got a little (ok, a lot) nervous and while trying to "play it cool," put my car into park before coming to a complete stop.
This caused my car (and me) to lurch forward in front of my future husband.
Awesome.
Until recently, I was totally and 100% sure that he didn't see the lurching incident.  He didn't laugh when it happened, and didn't say anything to me about it... So I assumed I was free and clear.
I was wrong.  Very wrong.
I also like to remember one day when I happened to get up from my desk and turn around (Ryan's desk was behind mine) to see Mr. Peters looking at me.  We made eye contact and I'm pretty sure my heart skipped a beat... Maybe two.
Once we hung out outside of work a few times, it became crystal clear that this was what we had been waiting for.  There was no pressure, no games, no history, no nothing.  It was just us being us and loving each other for exactly who we are.
I think you know how it turned out. 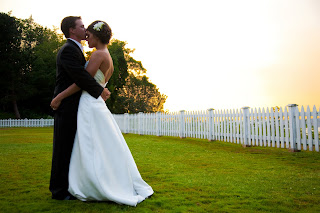 Something I often think about, is all the "things" that had to happen in order for us to even meet, let alone be where we are today.  The opportunities, the choices, the "yes's" and the "no's," all lead us to Wells Fargo Financial, for goodness sake.
It is amazing how things work out.
You meet hundreds and thousands of people in your life - and it only takes one to change it.
I cannot wait to see what else is in store for us.
Take Luck,
LP
Posted by Lauren Peters Blog at 11:54 PM

Email ThisBlogThis!Share to TwitterShare to FacebookShare to Pinterest
Labels: About Me, Flashback Friday, Ryan