If You Give a Kid a Cupcake...

I'm only sort of kidding and I'll tell you why.

This past weekend was kinda nutty.  Ryan had to work 8am-8pm on both Saturday and Sunday.  Odd shifts are far from ideal, but they are what they are and I try really hard not to complain.  At least not too much anyway.  As luck would have it, with Ryan at work and me 33 weeks pregnant, Camden decided to give me a real run for my money.

Saturday morning we had soccer and it was all fine and dandy.  Until class started.  Because I am compulsively early, we were there before the mob of 20 wild beasts (and their parents) gathered on the soccer field.  Cam was happy to run freely (wildly), pass the ball back and forth with me, and score goals.  My dad had come to watch and was standing out on the field with me when my Hammy decided he didn't so much want to participate.  Like at all. 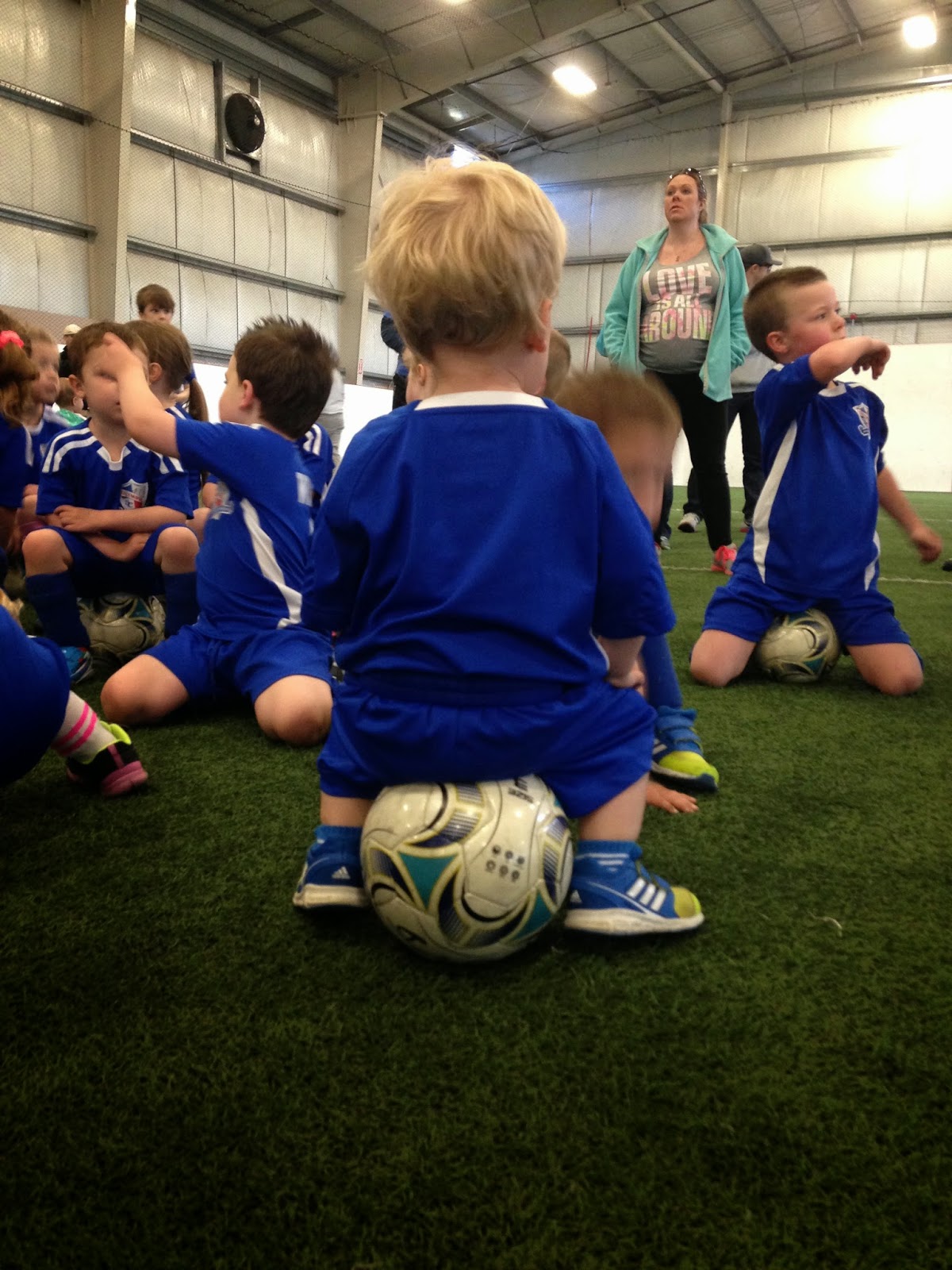 For the next 45 minutes, he alternated between debating on participating, throwing himself on the turf, drinking his water, running away from us, picking up some of the obstacle course equipment and using them as (flying) weapons, and just generally doing the exact opposite of anything and everything I said.  I promise I'm not one of those parents that thinks their child is a perfect little angel (hello, I refer to him as a wild beast), but this behavior was really out of character for him.  We tried ignoring him, two-year old appropriate reverse psychology, and timeouts and none of it was helping or working.  He kept saying, "Go home?" and while part of me really, really wanted to get out of there and put us all out of our misery, the other part thought, "No, we're not going home, you little jerk face.  We are staying here."  More flailing, more defiance and I finally waved my little white flag, threw him over my shoulder (a sight, I am sure of it), and carried him off the field.  A screaming, kicking child, and a 33 week pregnant woman don't really mix, so my dear old daddy had the honor of taking over as chariot.

Thank goodness he napped well and wasn't a complete shit the rest of the day and evening, but he was close - totally sassy and testing my already low patience like it was going out of style.  We capped off the day with a trip to the park to "frow wocks." 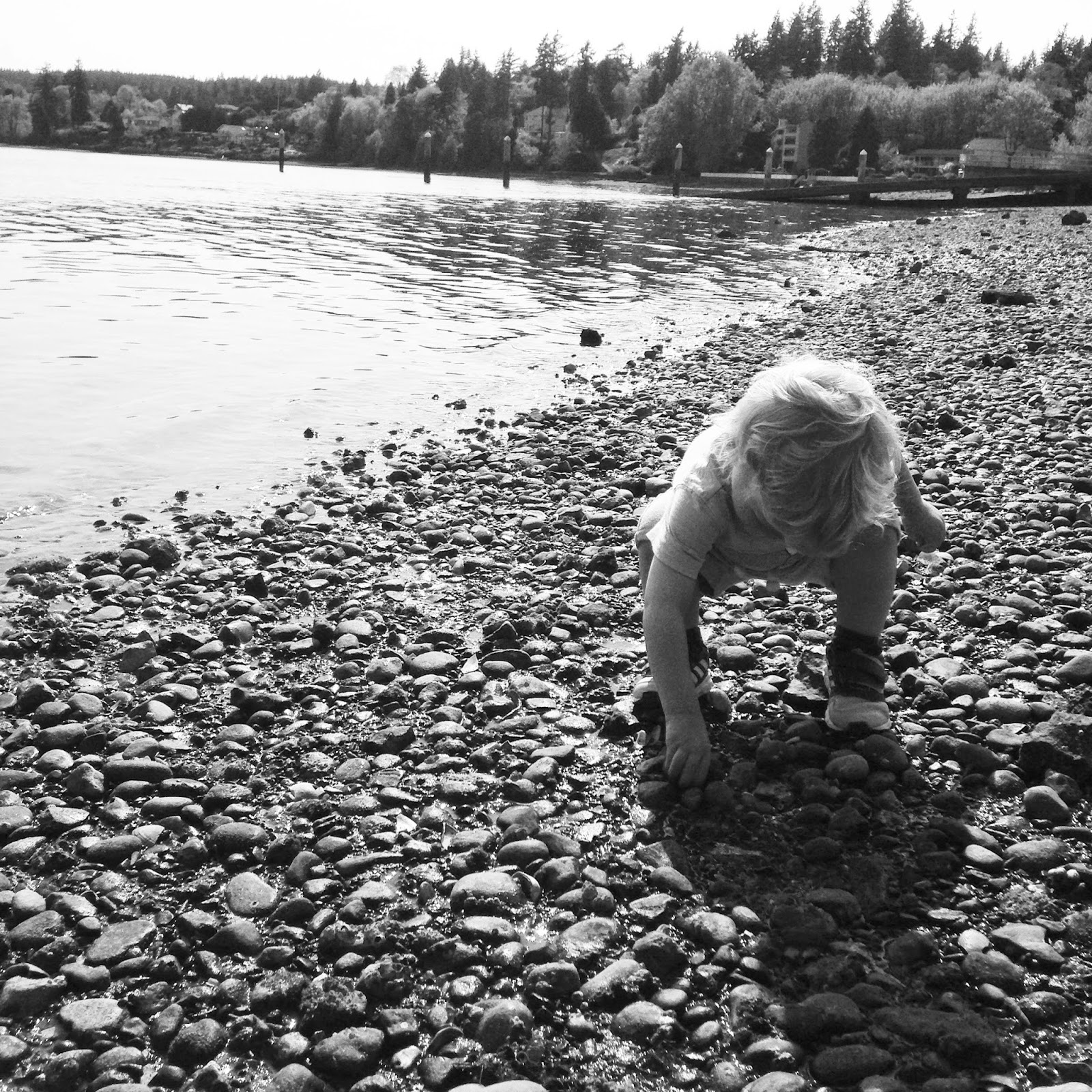 Sunday morning he was in a super great mood.  We went to the grocery store nice and early (because that's what parents whose kids wake up at 6:15am on Sunday do), and he was my little helper.  He loves counting and putting produce into the plastic bags and then gently placing (ahem, throwing) them in the cart.

We spent the rest of the morning playing trains, reading books, blowing bubbles, and FaceTiming with Ryan's parents.  Our friend's little boy, Alex, was having his third birthday party at a local park in the afternoon and it was going to work out "perfectly" with Camden's nap time.  I can hear God laughing at me as I type this, because I'll give you two guesses as to who decided it was a great day to spend an hour protesting his nap.

Did you guess Camden?  Congratulations and don't mind my middle finger.  He finally fell asleep after he had some quality scream-crying time in his crib (don't judge) and then being rocked to sleep.

I woke him up (I know!) and we ventured to the park.  He was very excited to go to the birthday party but not so excited to forfeit the present (four little Chuggington trains).  Thanks to the weather, the park was crazy crowded, but we found our people and I immediately helped myself to food while Camden was entertained by a bubble machine.  We spent some time playing on the playground, and then it was time for cupcakes and gifts.

Here's where it got really interesting.  We don't give Cam a whole lot of sugar.  Don't get me wrong - he eats his fair share of processed foods, but very, very rarely does he get sugary treats.  And I was reminded as to why.

I took about 90% of the frosting off of his cupcake and helped him eat it so not to make a total mess.  I should have videotaped his consumption because, dear lord - he inhaled it.  I should have known that a shit storm was looming. 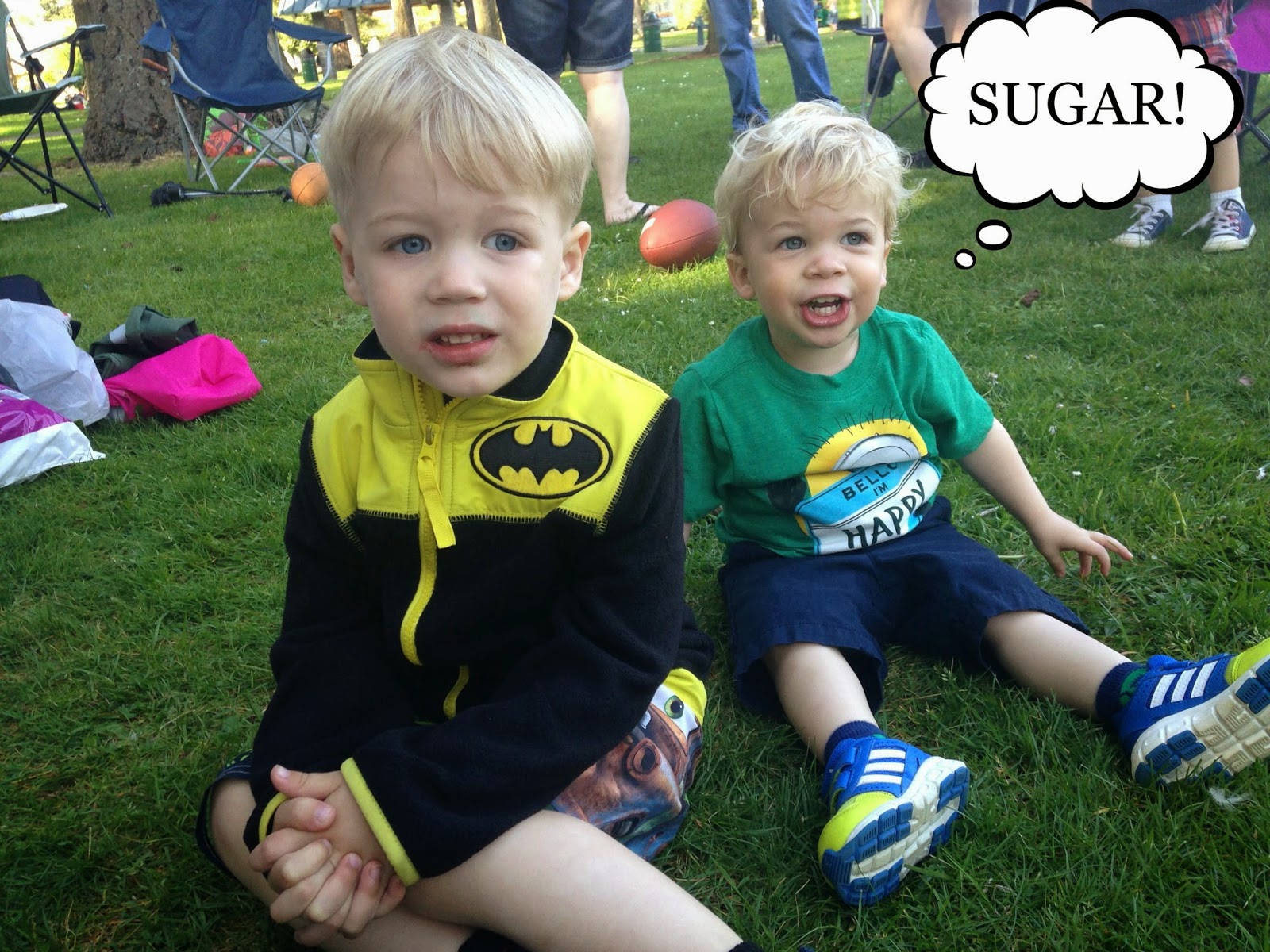 We watched Alex open all his gifts and resumed playing on the playground until it was time to go.  My parents were at the Mariner game for my dad's birthday and they had asked if we would check on and feed their puppies for them so we needed to scoot.  Cam surprisingly left without a fuss and we drove to Grammy and Papa's.  We let the dogs out, he stepped in dog poo, and somehow the dog poo managed to find its way onto his shorts.  Fantastic.

Cara called me on FaceTime so Cam and I sat down in the living room to chat.  It was then that I started to wonder if the cupcake he consumed at the party was laced with crack.  Why?  Because during this FaceTime session, my child thought he was auditioning for toddler WWF/WWE and was repeatedly standing on a little red rocking chair and jumping onto me like a spider monkey.  Or Hulk Hogan.  I don't even know.  It was sort of funny at first and then he got this crazy look in his eye and (wait for it) picked up his toddler sized rocking chair and threw it at me.

It's beyond embarrassing but I mean seriously, people.

Cara and I attempted to continue a conversation and failed miserably - both of us seriously distracted by our boys.  For the record, her boys were not throwing toddler-sized rocking chairs at her.  We finally gave in and ended the call, and I drove a pant and shoe-less Hammy home in relative silence, promising myself to never ever let him eat a cupcake again.

We got home, powered through the rest of the night, and I didn't even have to go in his room once to get him to lay back down in bed.  I think part of his little man self just knew that mommy was done.  Ryan got home just after 8pm and asked how my day was.  The tears immediately started flowing and somehow I managed to say, "It was OK."

With a new baby less than six weeks away, I should probably get used to our lives being a little more chaotic than we're used to.  But seriously - no more cupcakes.