Yes, I'm alive.  I've just been busy knocking out a crazy September.  Hammy and I went to Michigan, I went to Thailand, and we all just returned from a getaway to Southern California with Ryan's family. You'd think I turned into a travel blogger or something.
Moving on.

We flew down to La La Land on Saturday morning to meet up with Ryan's parents (who had just gotten back to the states from a 24-day cruise to Australia) and his sister.  After meeting up and enduring a very irritating rental car experience at Hertz (think video chatting with two different customer service representatives who couldn't hear me, and a third who's computer crashed after going through the whole process), we made the hour drive to Newport Beach.

We arrived around dinner time, so didn't have the time (or the energy) to do much else other than stick our toes in the sand and venture out for something to eat.  Cara found us the most amazing accommodations at a rental beach house and they did not disappoint.  No kidding - you took a step out the front door, turned left, walked 10 yards, and boom.  Beach.

I was a little worried about how Camden would do with such a beach-intensive vacation.  My parents tried taking him to a sandy beach in our area earlier this summer and it sounds like it did not go well. He didn't like the feeling/texture of the sand and was generally miserable the entire time.

We took one step onto the (gorgeous) beach, he immediately stopped walking, and looked up at me as if to say, "You are crazy if you think I'm going any farther."  Liam and Grandma were already long gone, so I tried to be nice/calm and coax him out further, tried holding his hand and walking with him.  Nothing.  This child wasn't going anywhere.  Finally I gave up and started to slowly walk away and said, "OK, I'll go play with Liam in the sand.  You stay here."  His response?  "Meeum (Liam)!" and his previously cemented feet were on the move.

I did happen to get this gem of a photo after Liam took a fully-clothed dip in the Pacific. 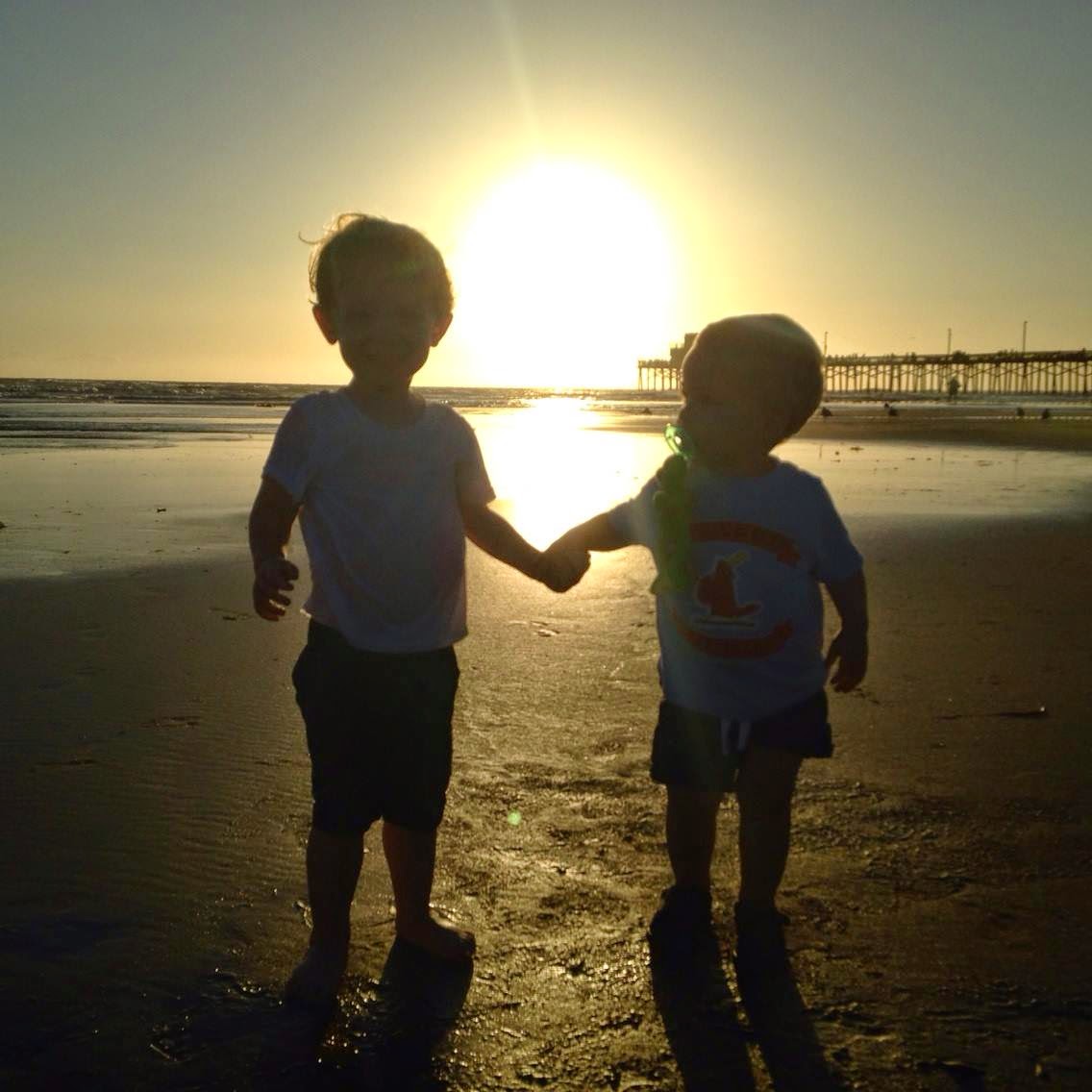 Sunday was a much needed, lazy, beach day. 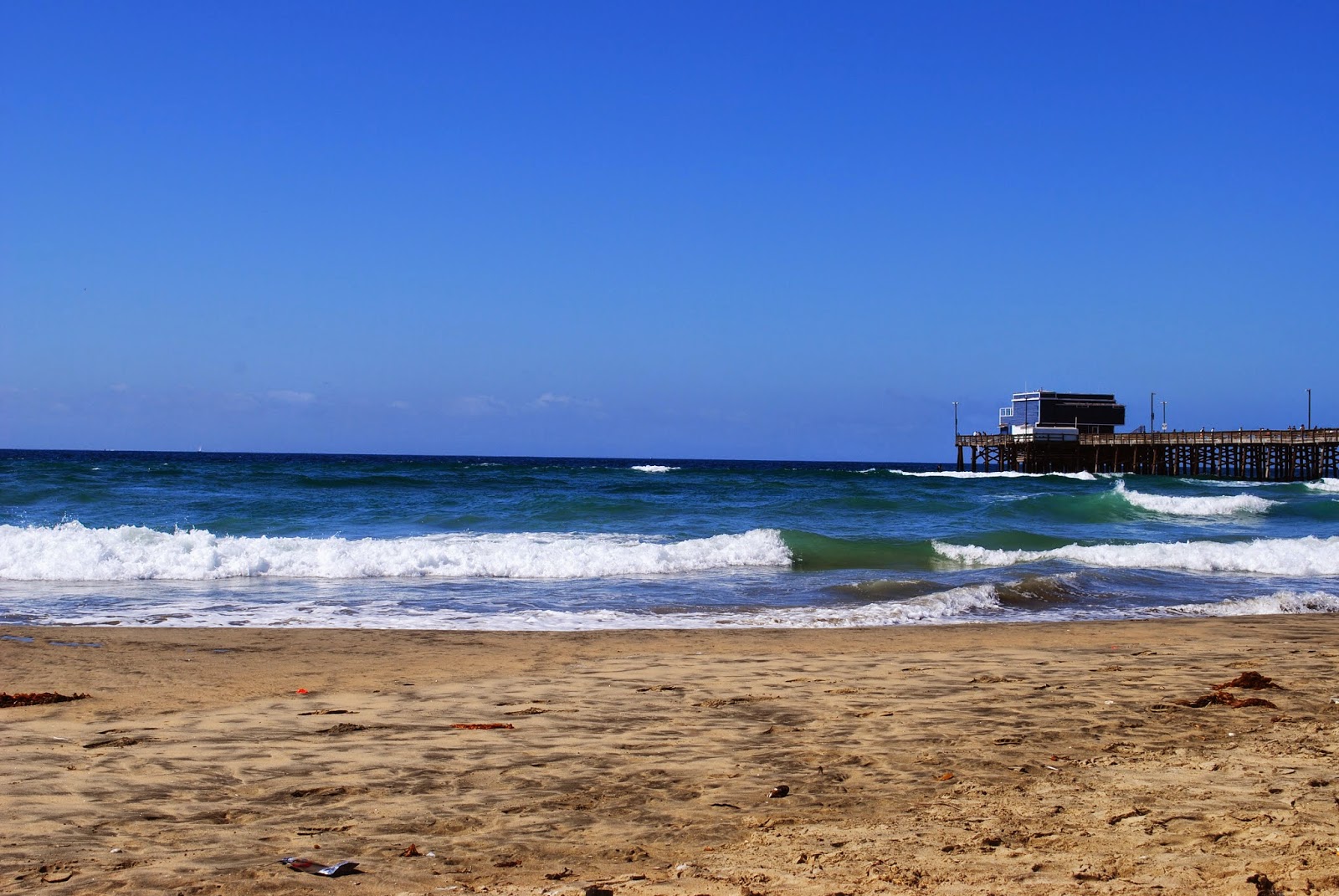 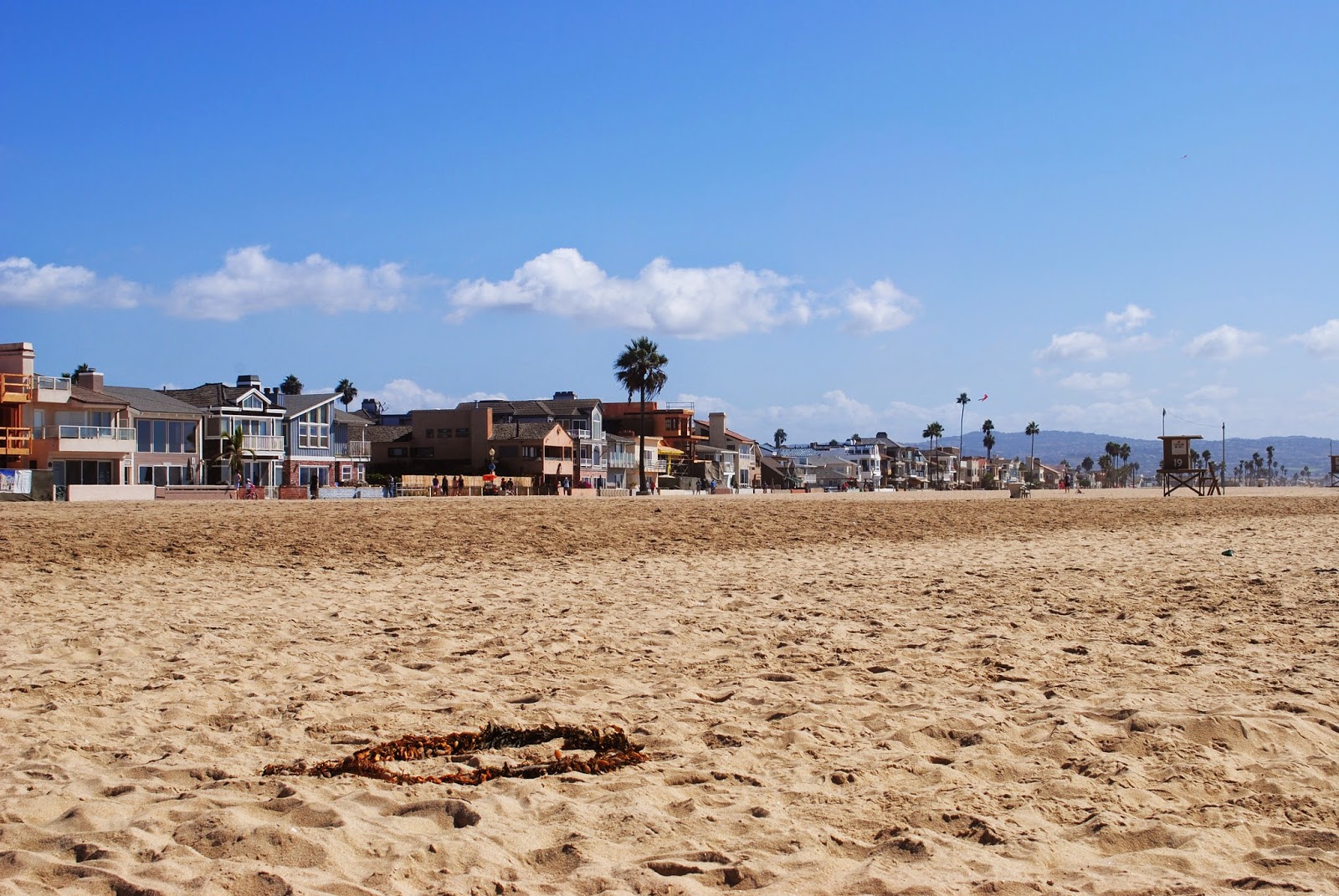 Liam was (again) so excited to be at the beach, so by the time Cautious Camden and I made it to where the family had set up camp, he was knee deep in sand and playing with beach toys.  Hammy was unsure at first, but he eventually joined in the fun with only minimal boo-hooing.  Liam would have dove headfirst into the ocean and stayed there all day.  Cam was much more content to sit on a sand-free beach towel and just point to the lifeguard trucks, birds, and water. 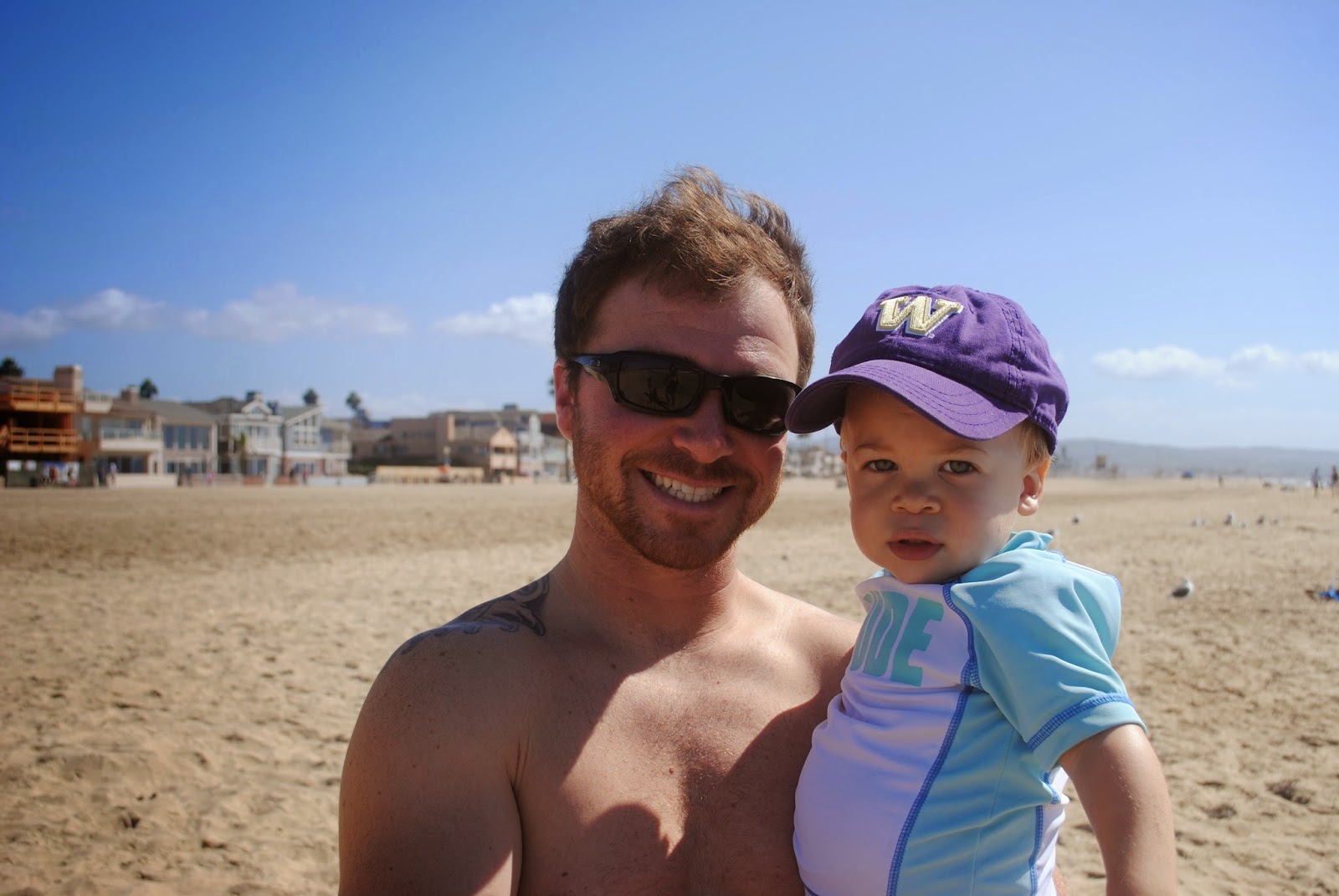 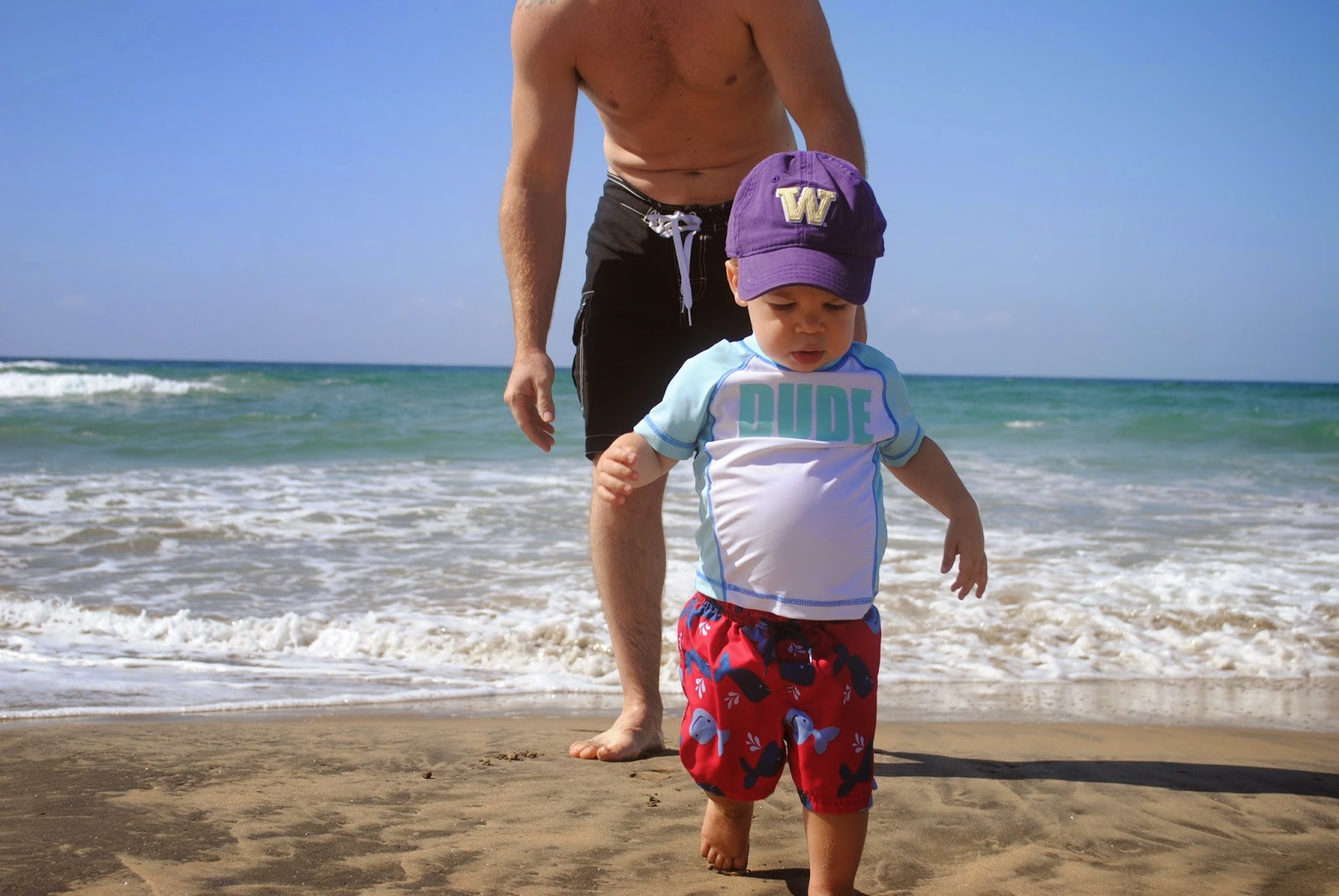 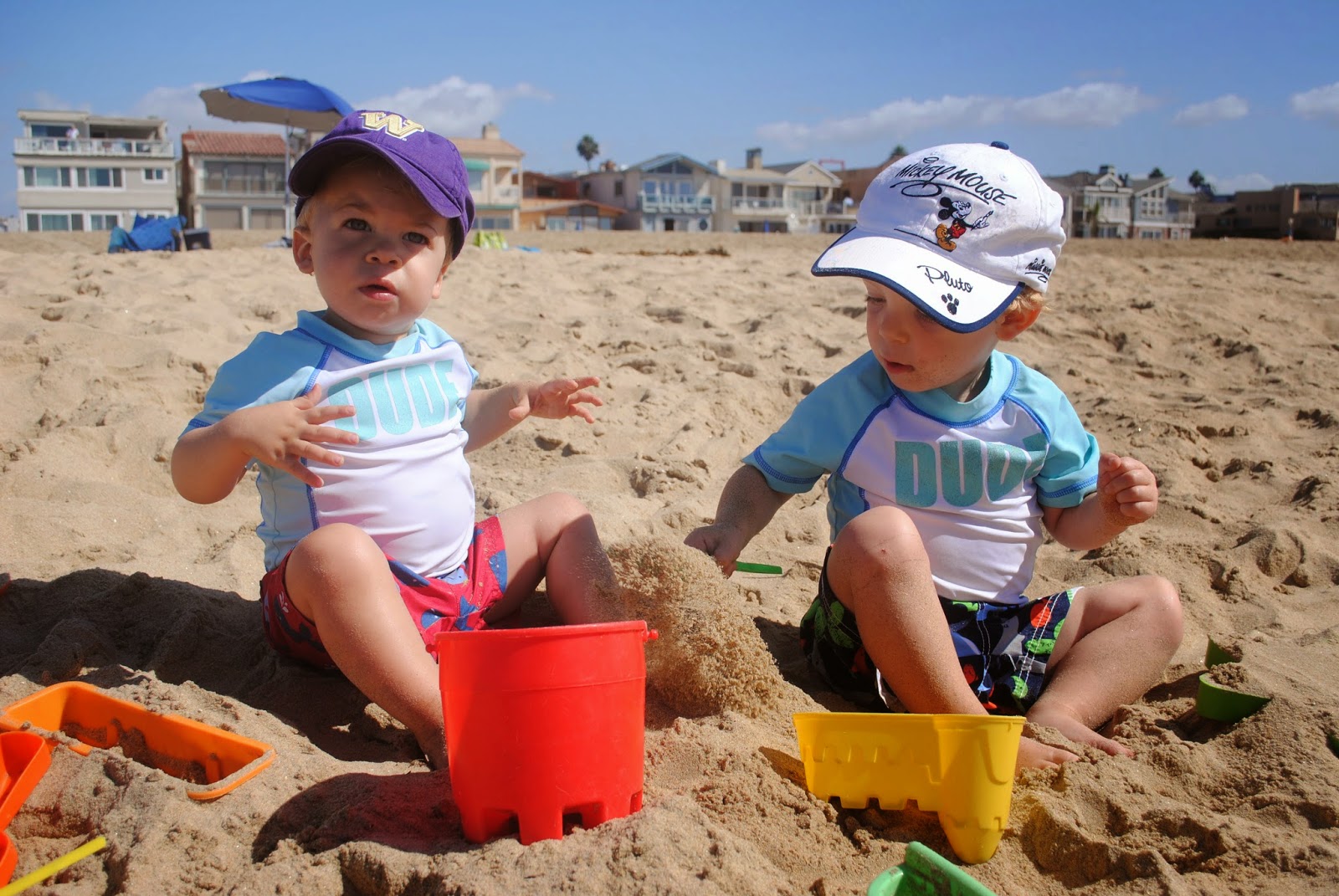 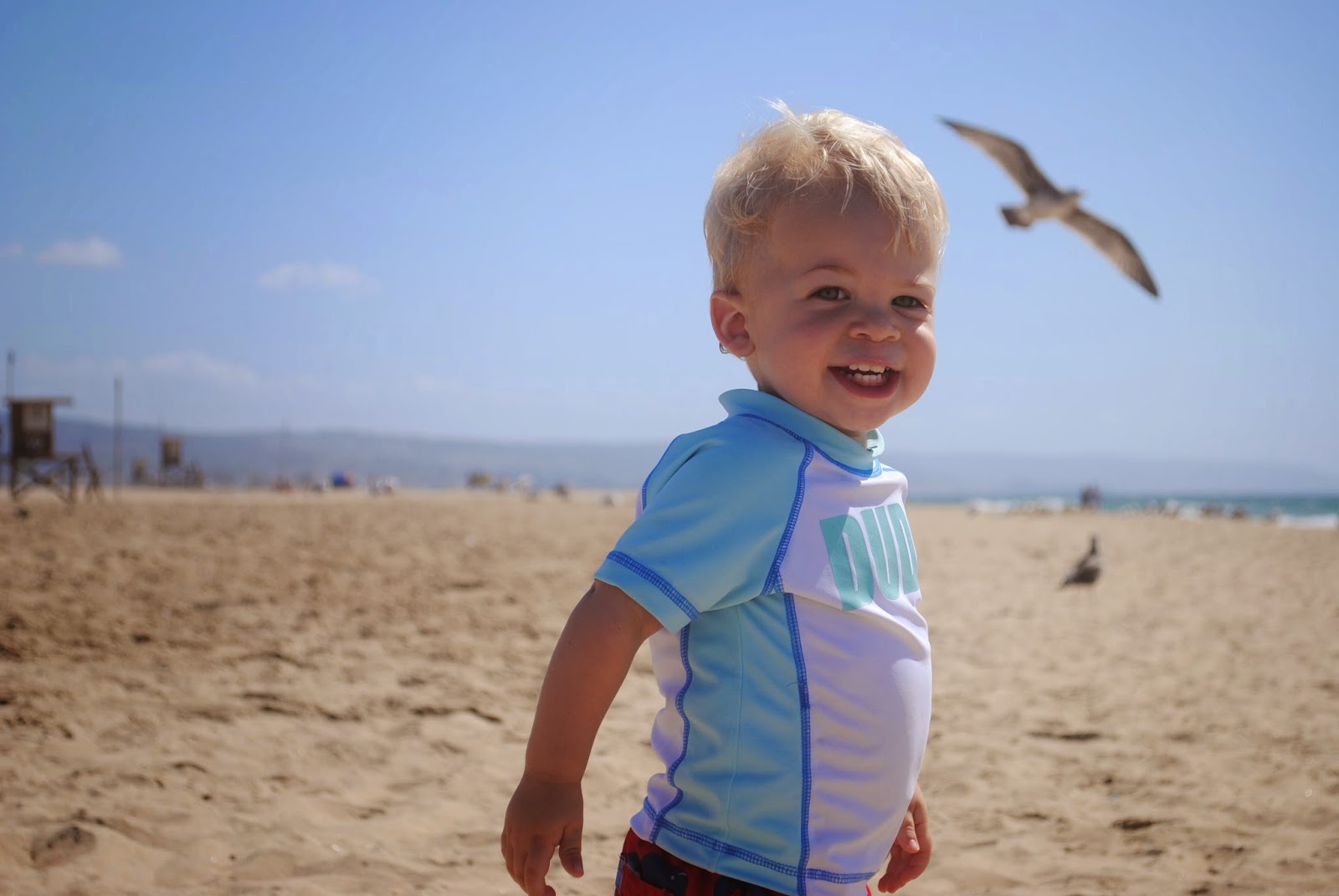 The theme of this trip with these two could have totally been "monkey see, monkey do," because whatever one did - the other followed.  There was lots of precious hand-holding and hugs that lasted too long for Camden's liking. 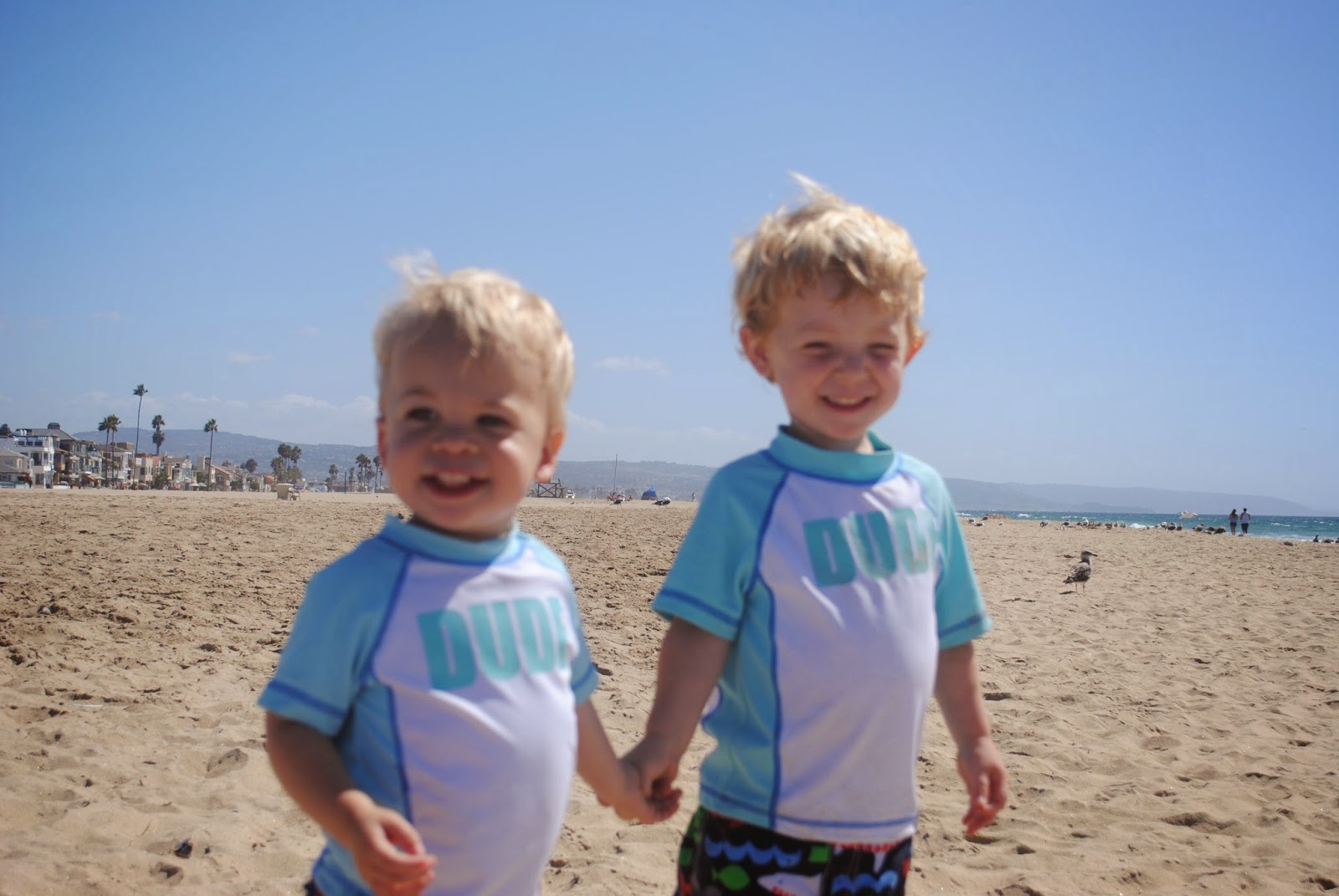 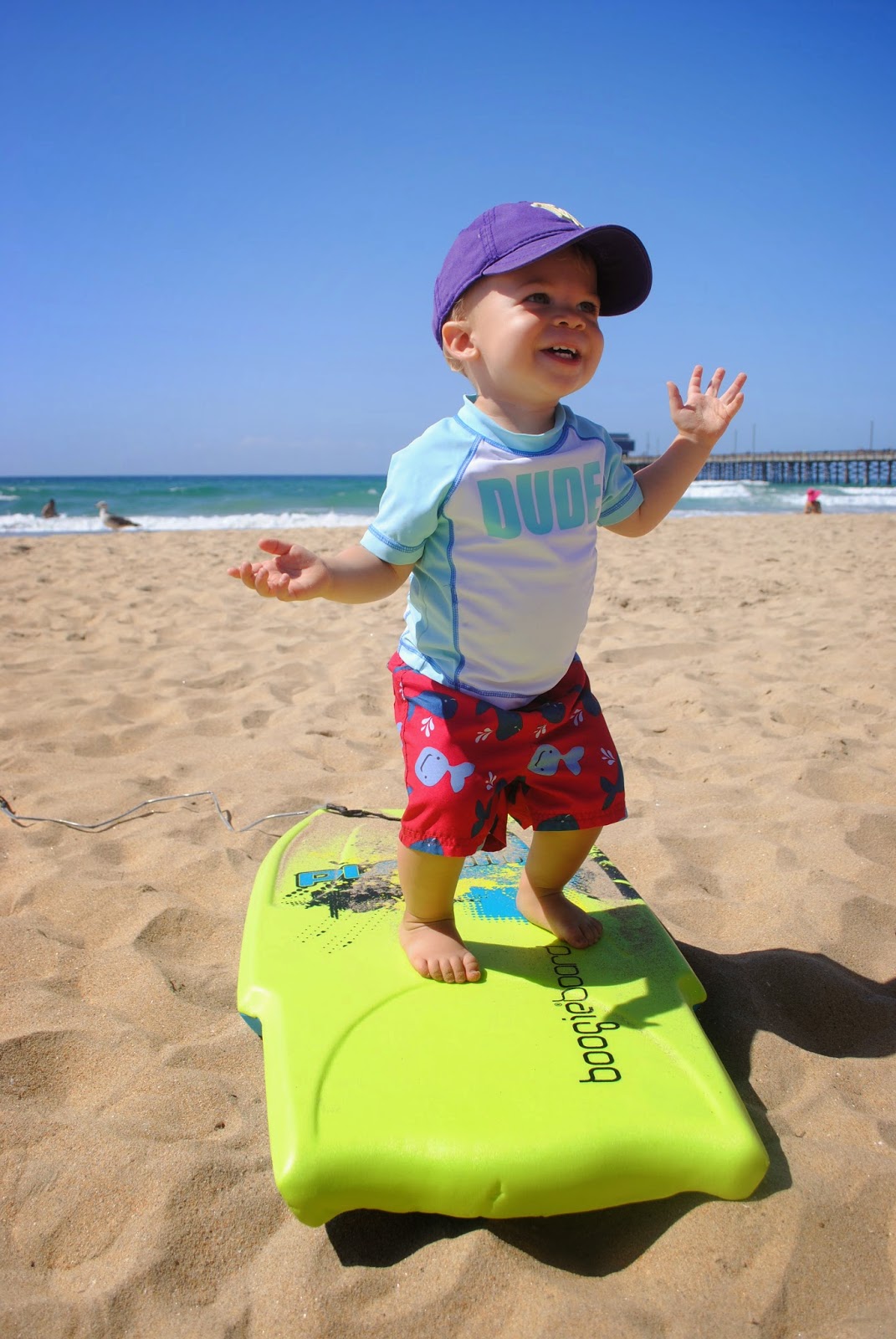 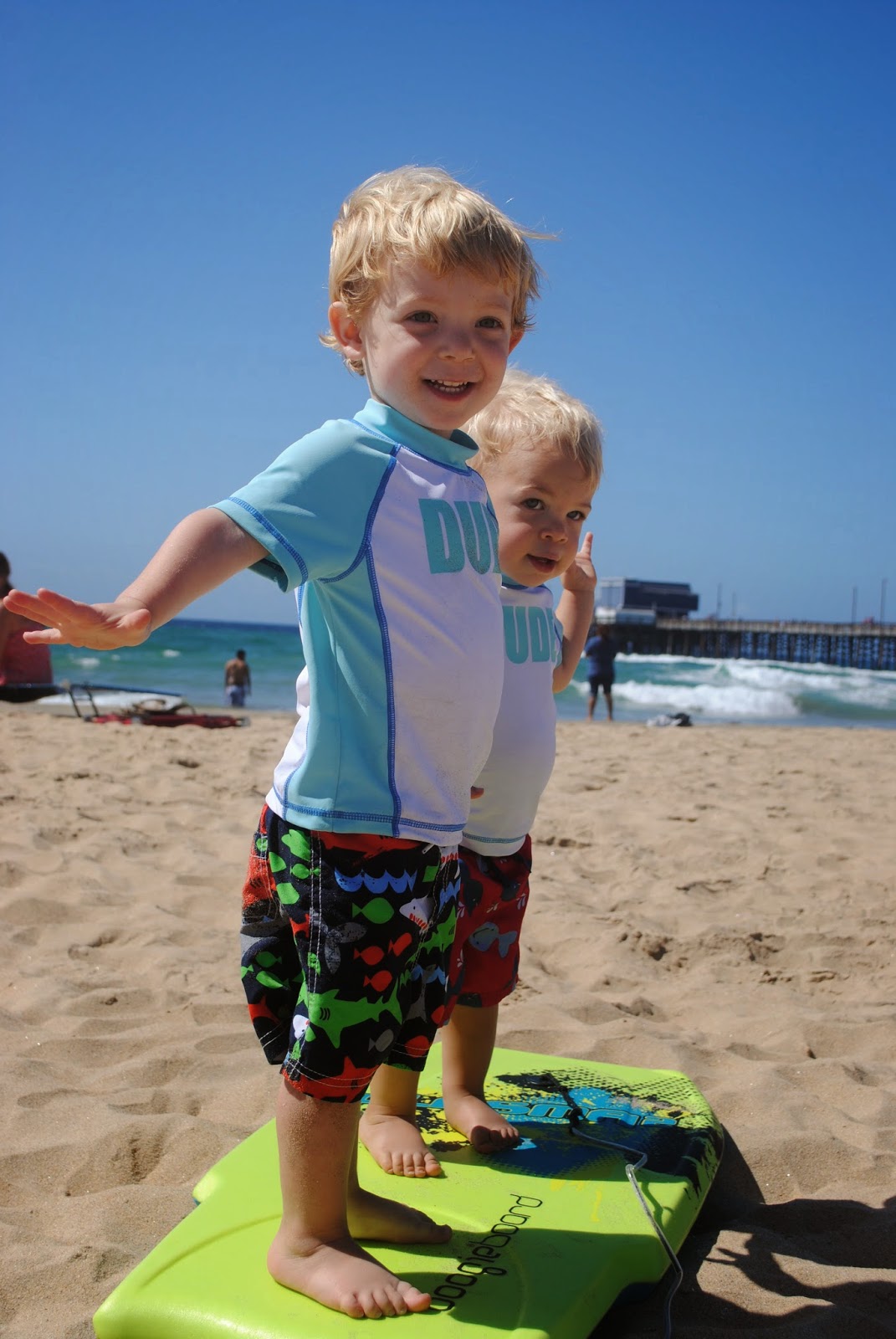 After getting a good dose of California sunshine, we headed for a pre-dinner walk on Newport Pier.  Both boys had no fear and were more concerned with running ahead and trying to fit their big heads in between the pier railings than sticking with the group. 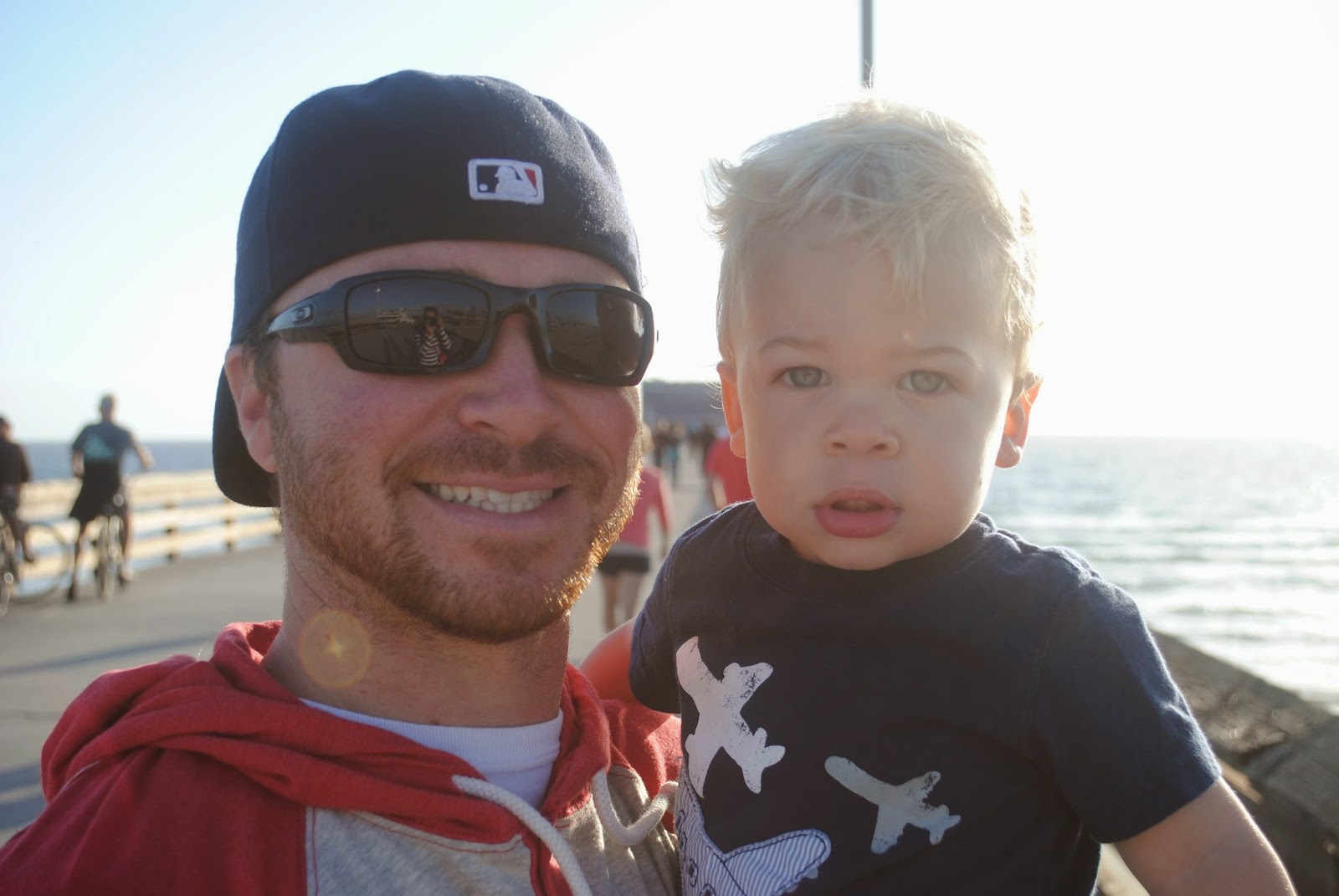 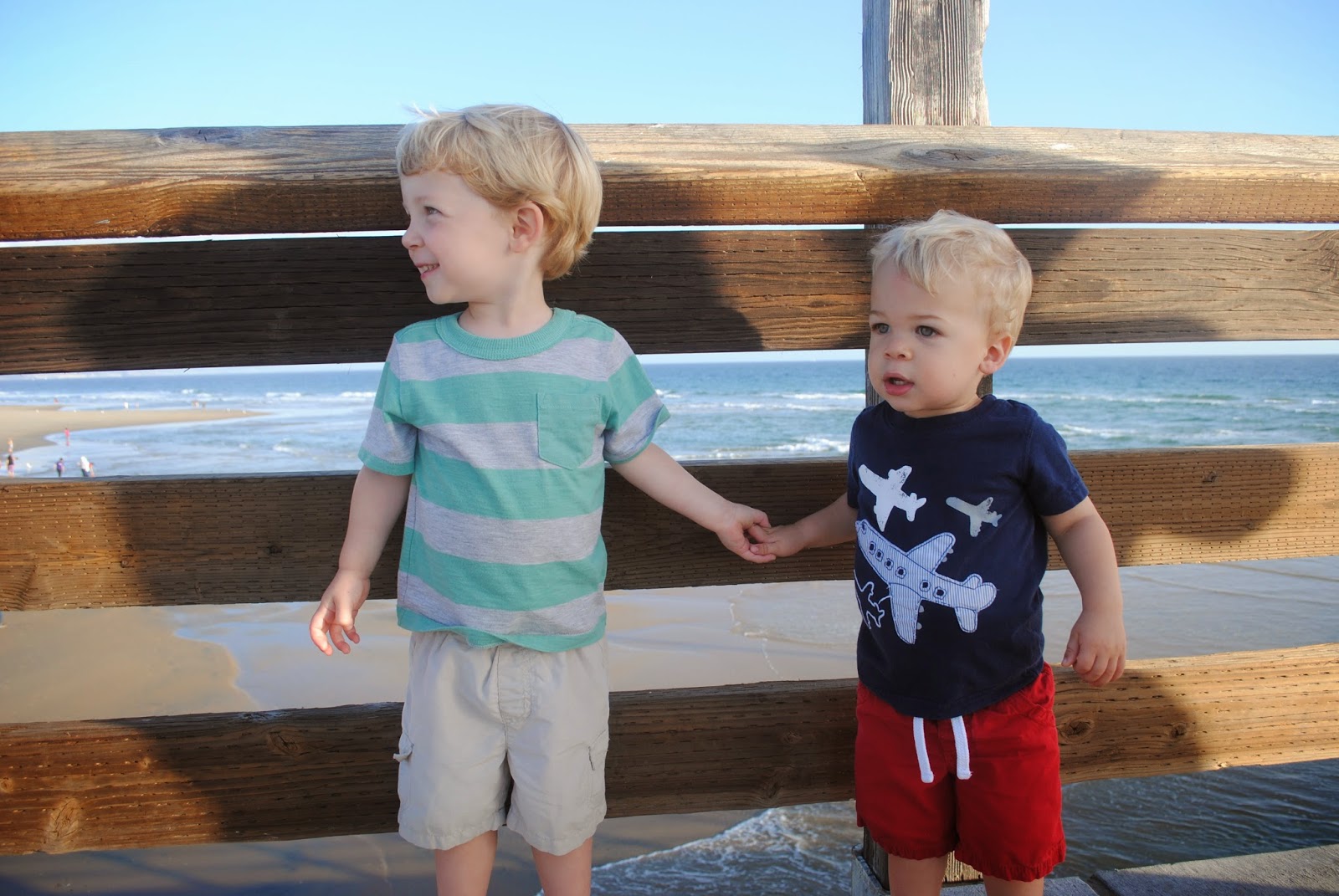 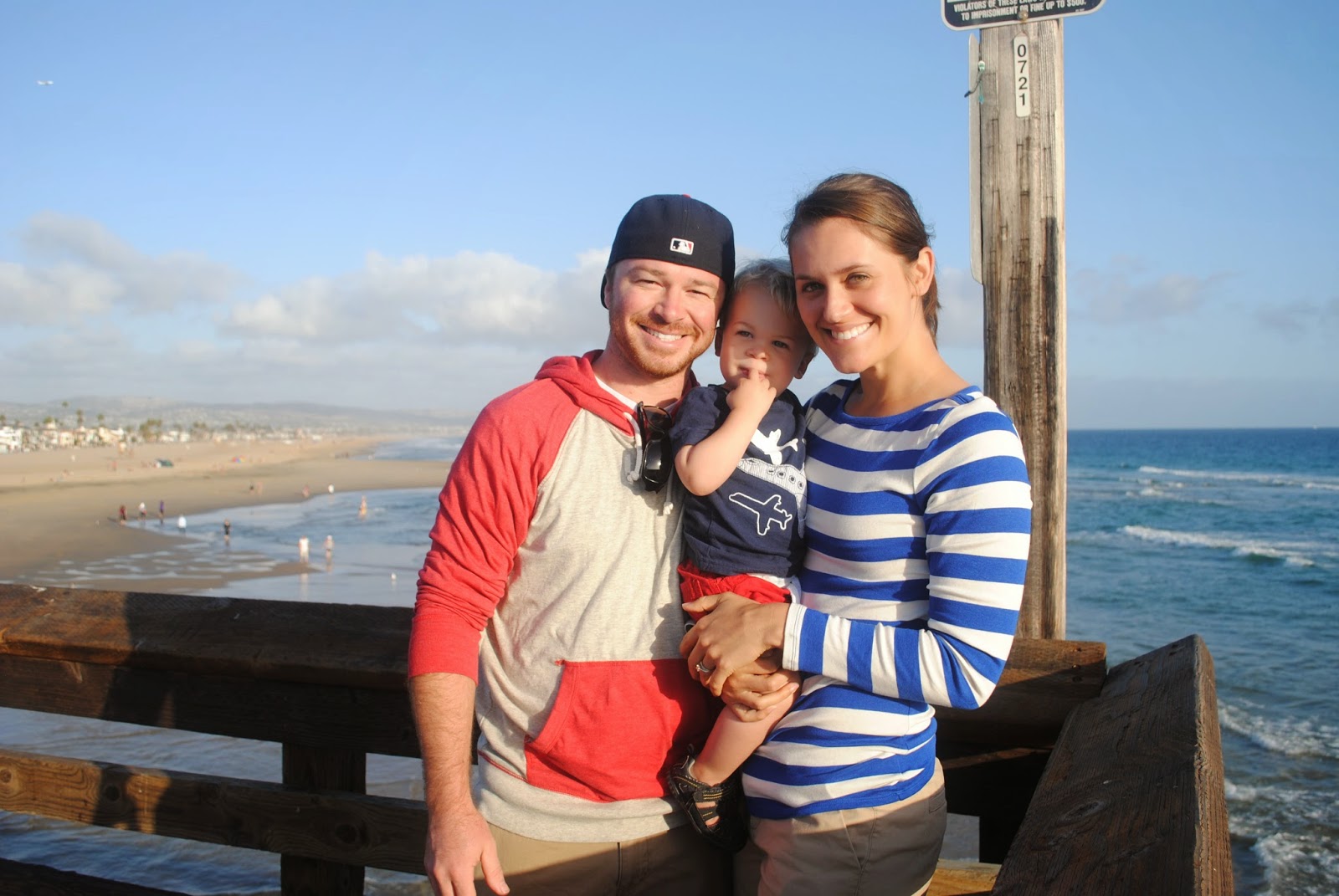 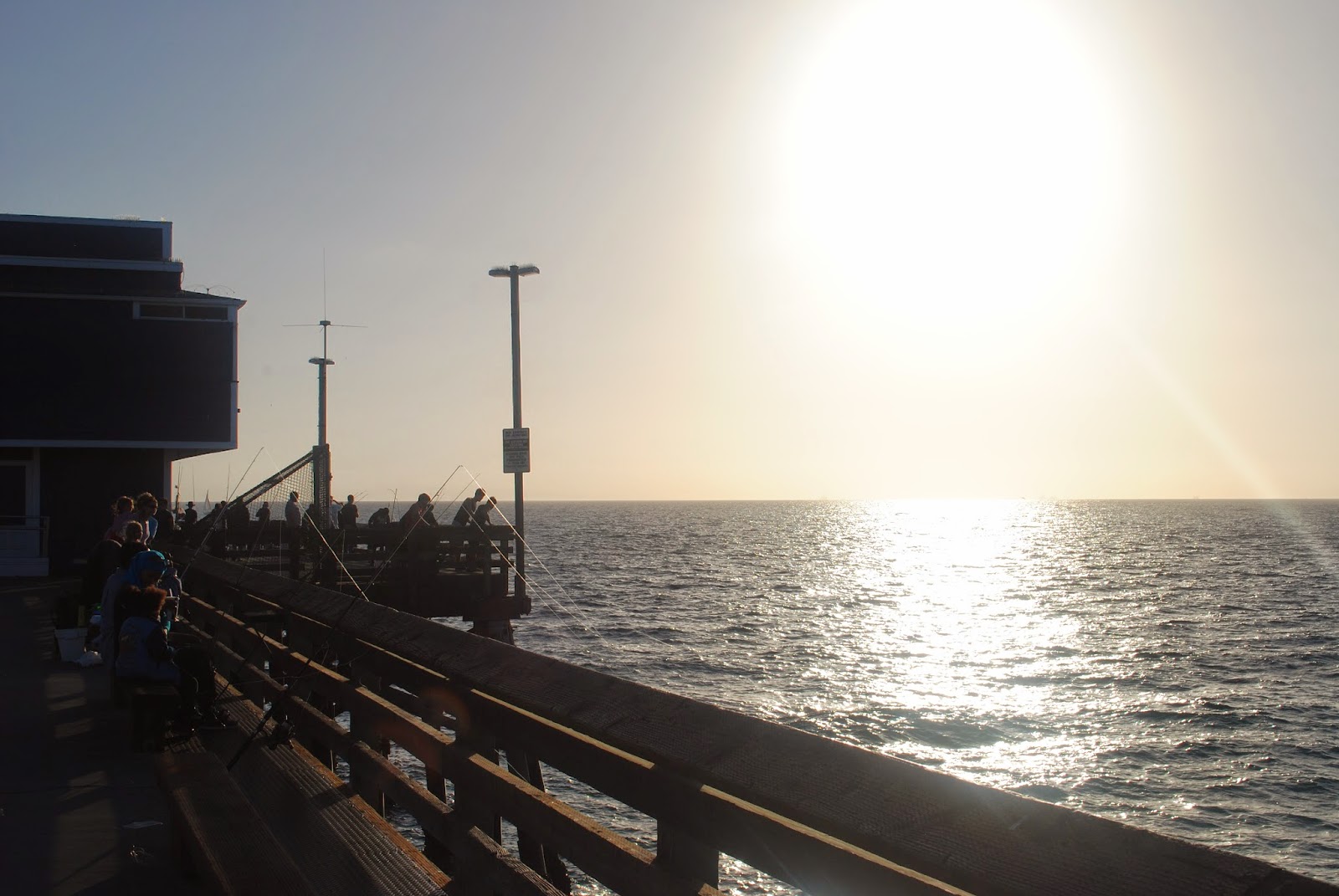 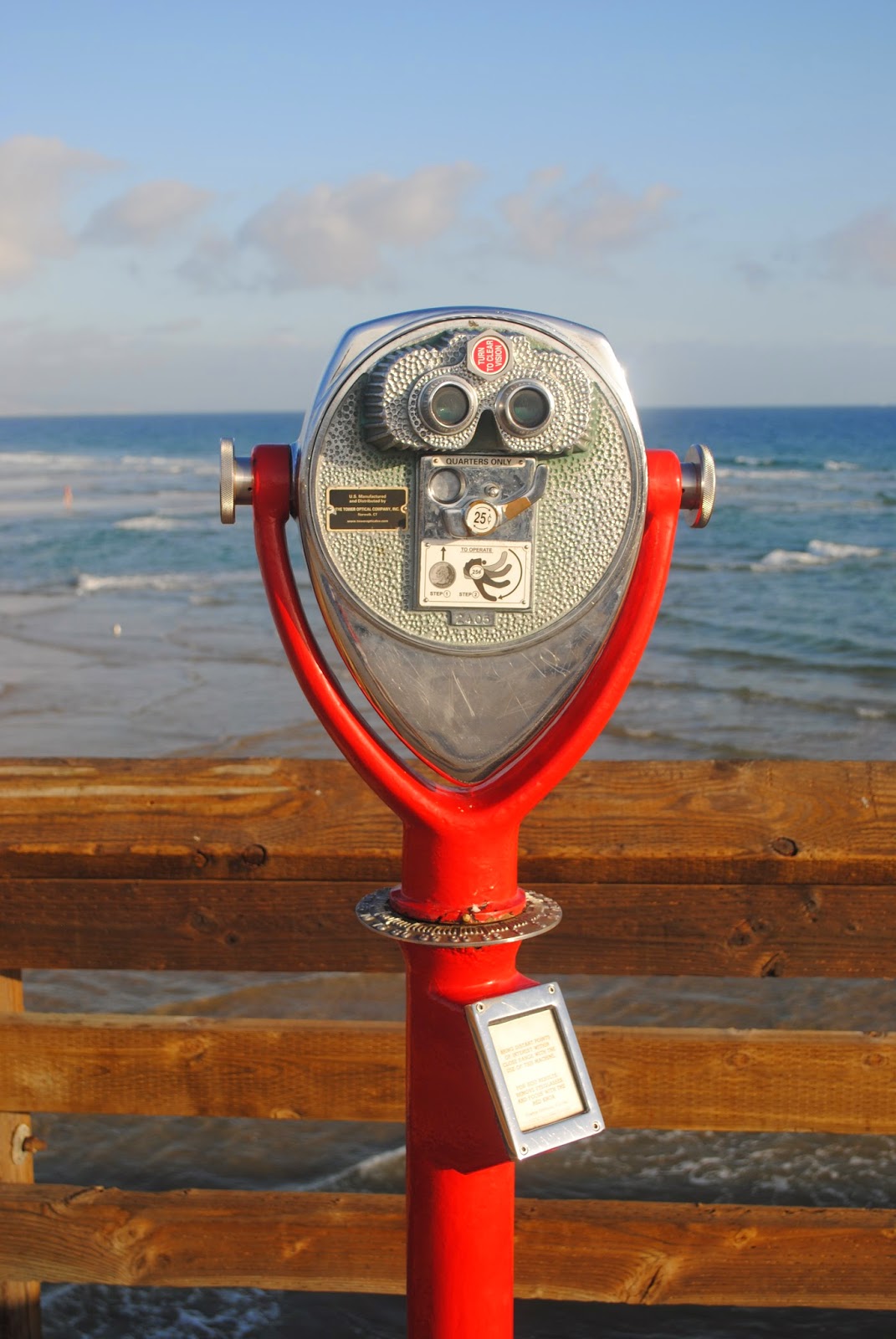 I know - the suspense is killer.