Spoiler Alert: Do not let the title mislead you.  This may be the most boring post related to traveling to Thailand in the history of posts about travel to Thailand.  There are also a lot of random pictures.  So, don't say I didn't warn you.

My job requires a lot of travel, and a majority of it is international travel.  When I took this position back in 2012, I was excited at the possibility to travel internationally, but my then-supervisor had made it clear that I would only have to travel (both foreign and domestic) if I wanted to.  I've been lucky so far because most of my foreign customers don't require travel, and only have had a few trips this year.

It's funny (or not) that the four trips I've gone on this year have coincided with Ryan working an alternate work schedule.  He's been on day-shift 12's, swing shift, and night-shift 12's.  This trip was no different (night-shift 12's), so we had to rely heavily on my parents to help with the little man.  They have been wonderful and happy to help, but I feel terrible because I know they didn't sign up to have a baby.

I probably sounded (and still sound) like the most ungrateful asshole in the weeks before this trip, because I was not looking forward to it at all.  I was dreading traveling there, I was dreading the small amount of time we would actually be spending in country (compared to the time it took to get there and back), I was dreading the time change, and I was dreading being so far away from my family.  Wah wah, right?  I was going to Thailand.  I know, I know.

Funny story.  I was exhausted and starving for something that didn't come from an airplane. I had packed a small box of wheat thins and my beloved Lara Bars to keep my tummy company.  After showering, I cuddled up to eat my snacks before going to bed.  I ate some Wheat Thins and then couldn't find the Lara Bar that I swore I just set on the bed.  I was looking under the covers, in the bathroom, practically turning my bedroom upside down in the search.  So, imagine my surprise when I gave up, re-opened my box of Wheat Thins, and behold inside - my Lara Bar.  Jet lag problems.

After a wonderful four hours of sleep (sarcasm), we had two hours to look around Bangkok before heading south to Pattaya.

The view from the JW Marriott: 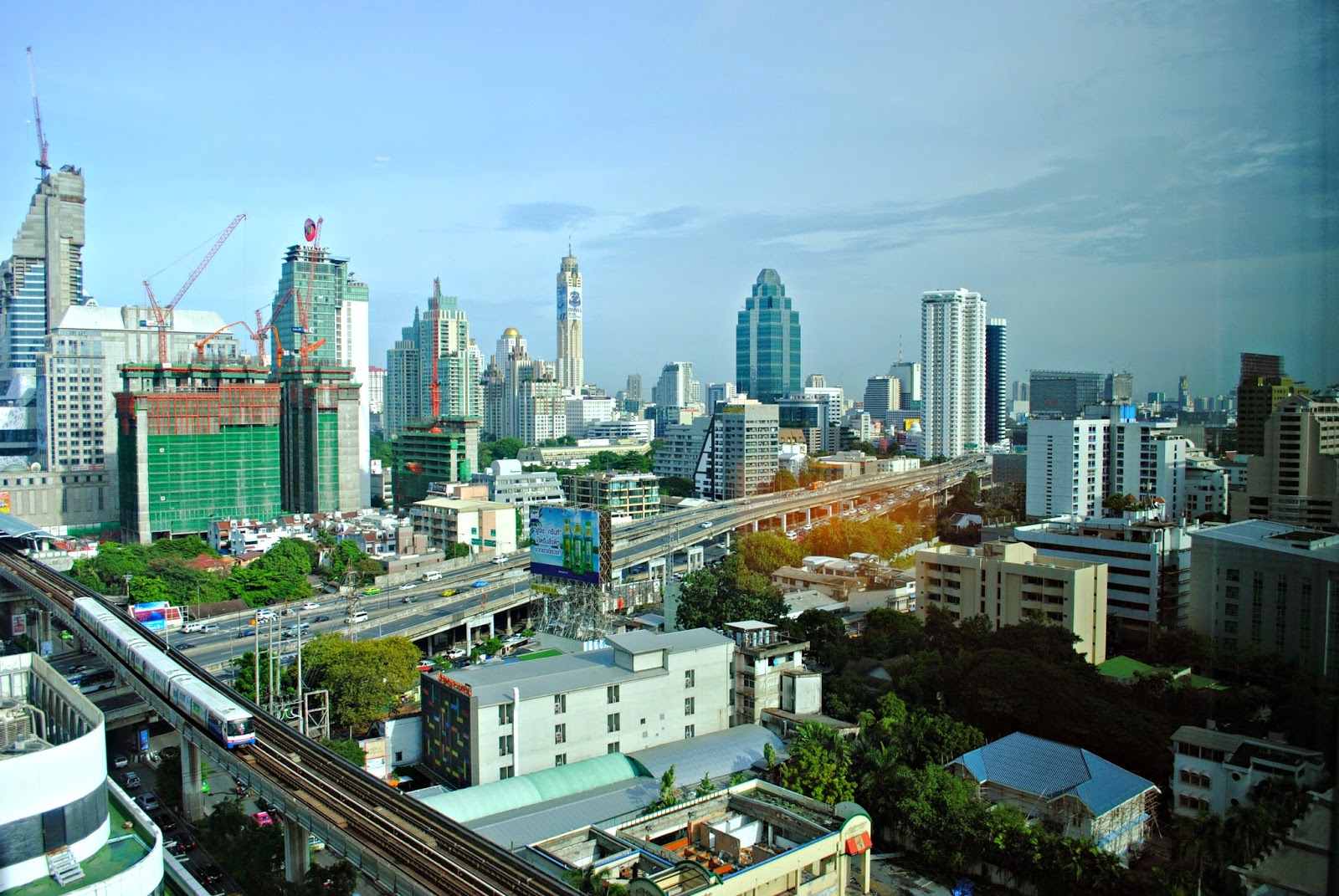 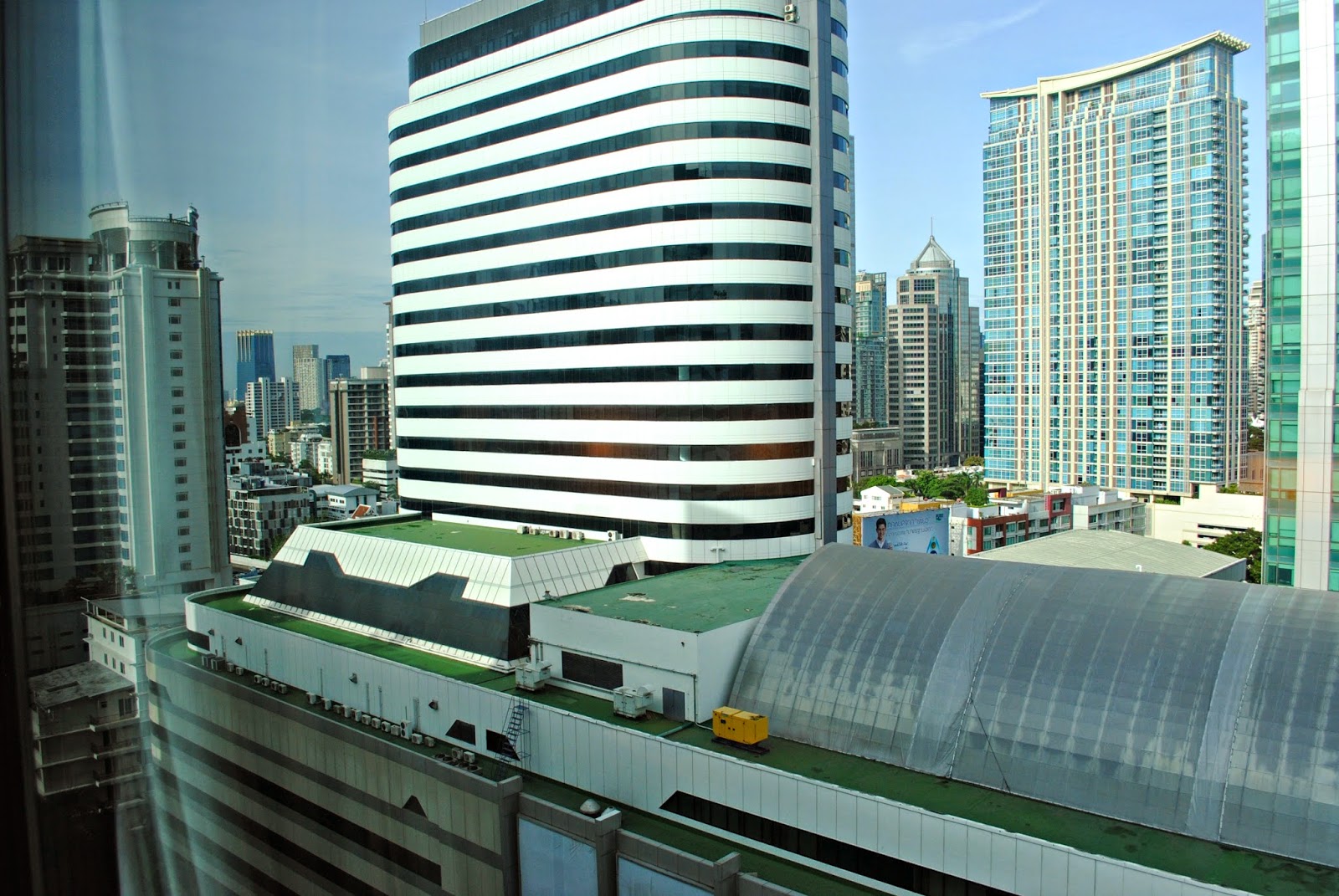 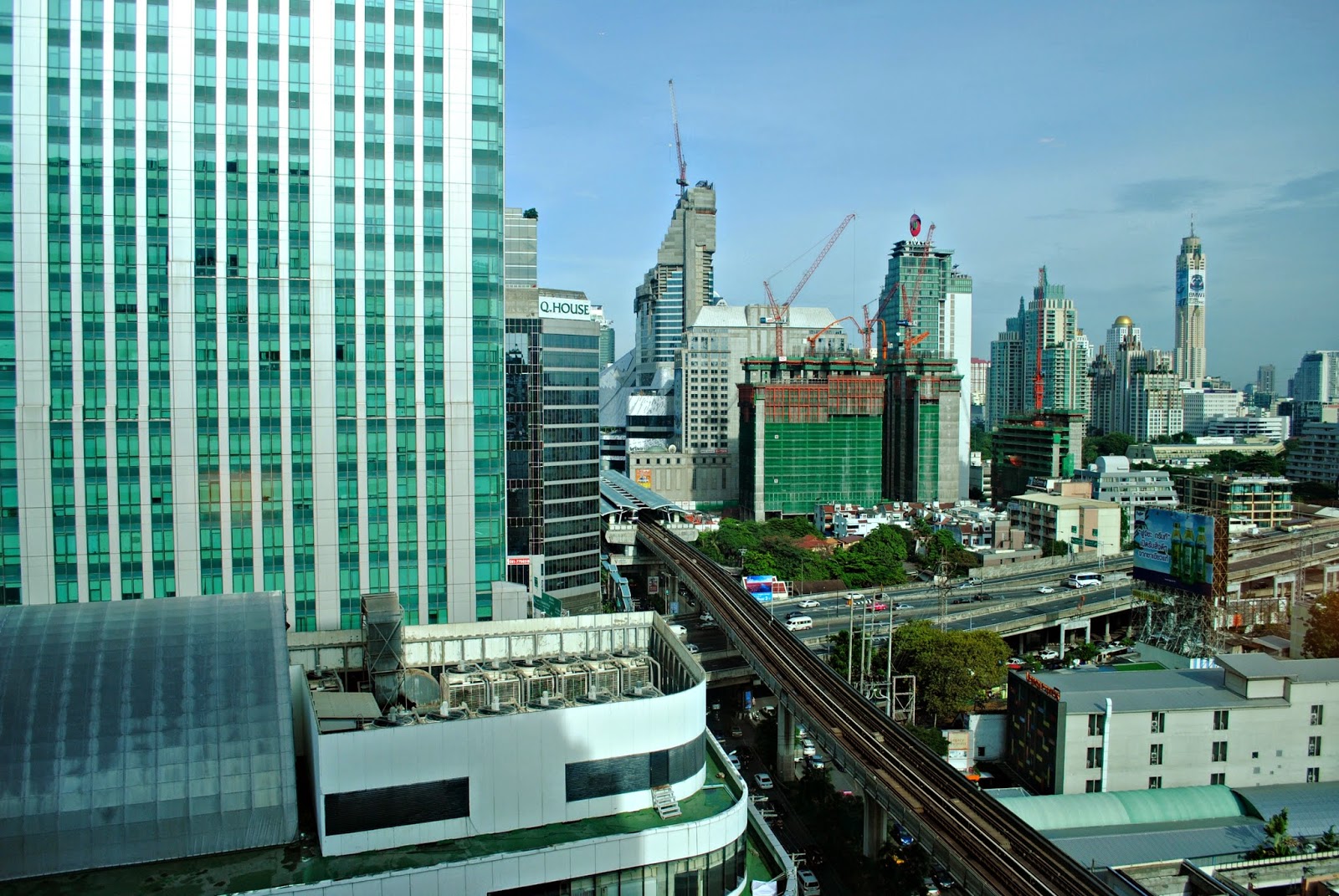 The blessed Starbucks that was directly across the street from the JW: 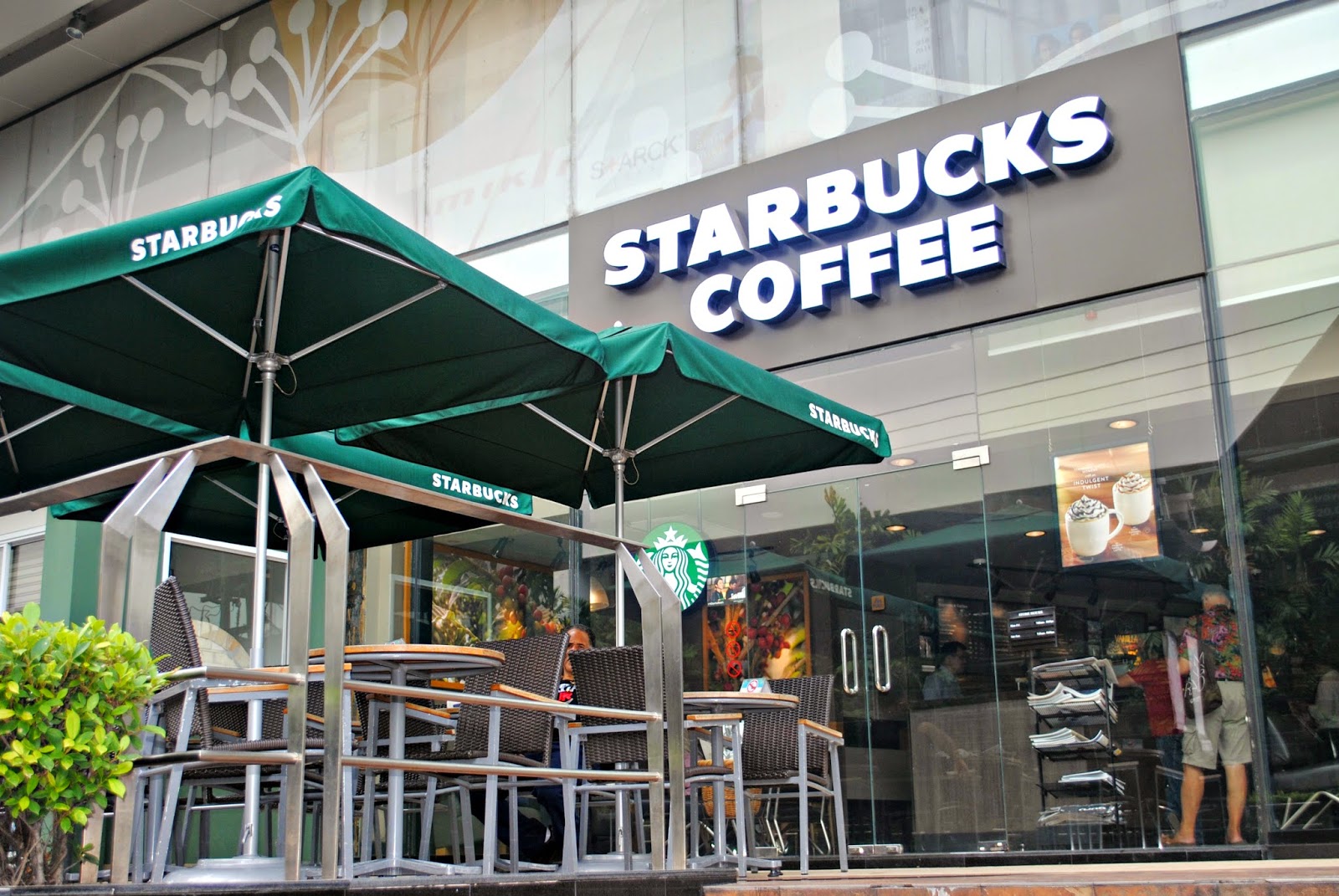 A popular mode of transportation in Thailand: 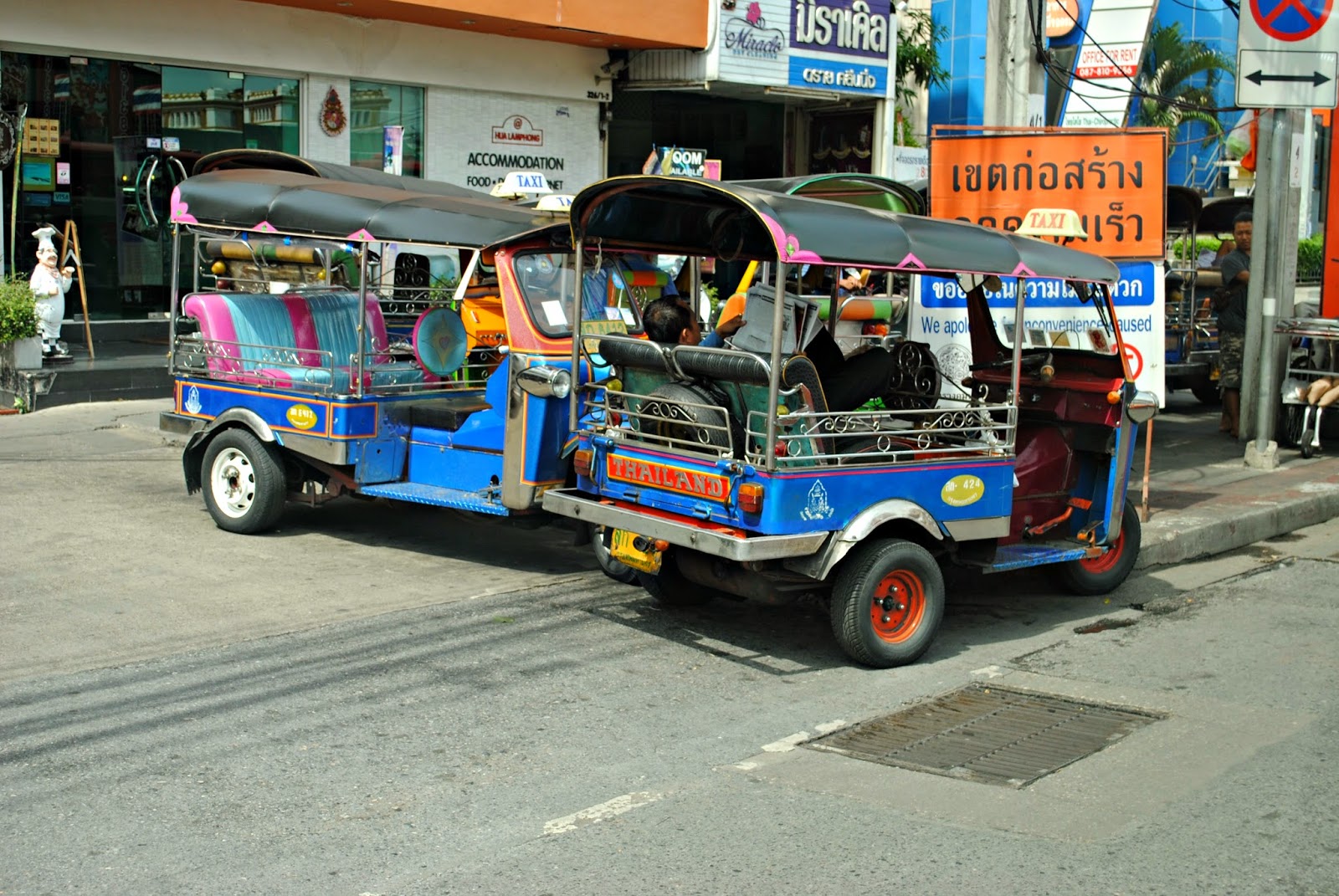 We ventured to the Buddhist Temple, Phra Maha Mondop (just on the edge of Bangkok's Chinatown) to see a giant, golden, Buddha. 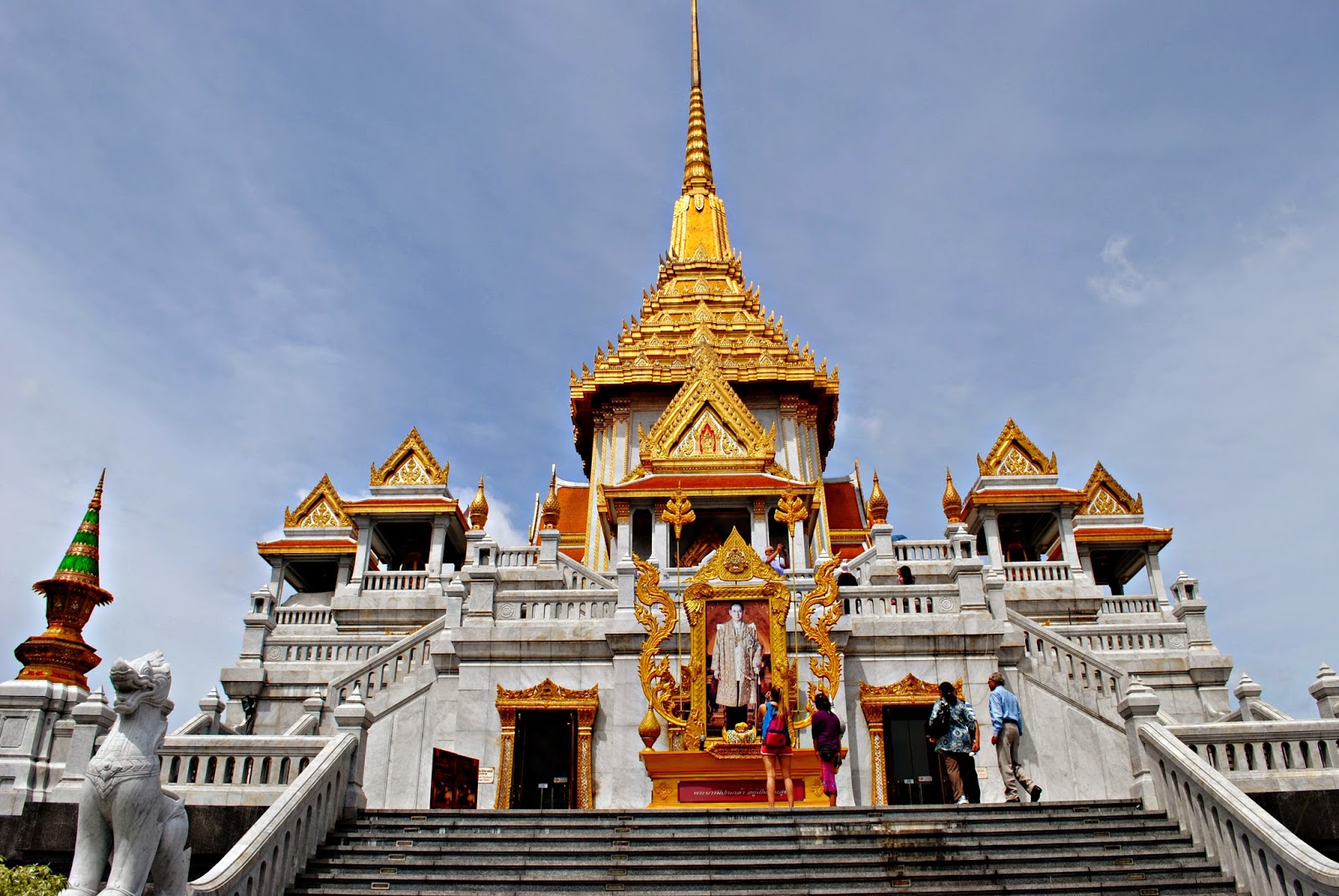 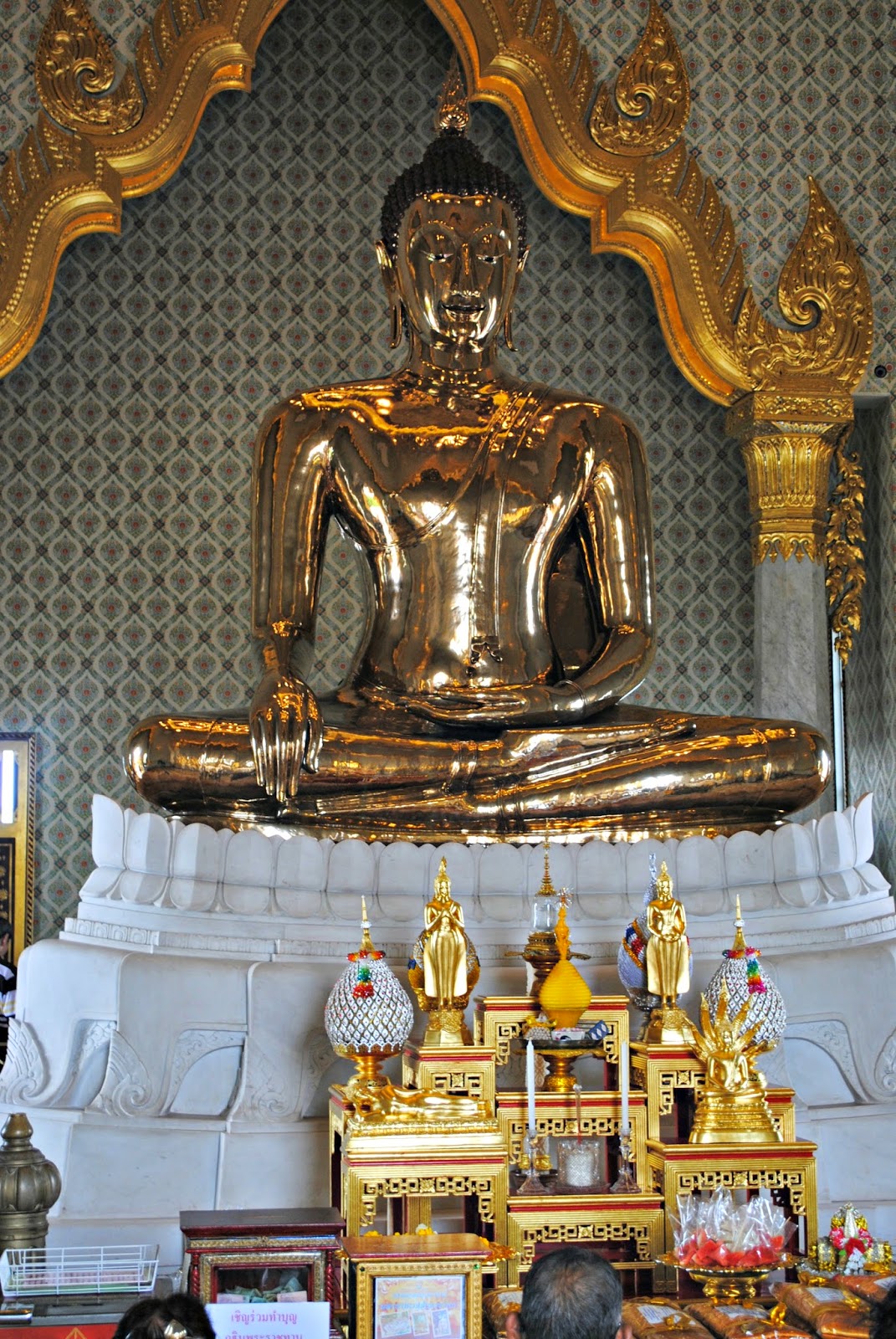 After removing my shoes, I had to rent a skirt for 20 baht (the Thai currency) because I had on shorts and my "bare legs" would be offensive to Buddha.  This lady was trying to tell me that I couldn't go into the shrine with my "bare legs" by speaking broken English and pointing at me.  Clearly clueless, and my co-workers already ahead of me, it wasn't until she was slapping my leg that I looked around and realized what she was trying to tell me. 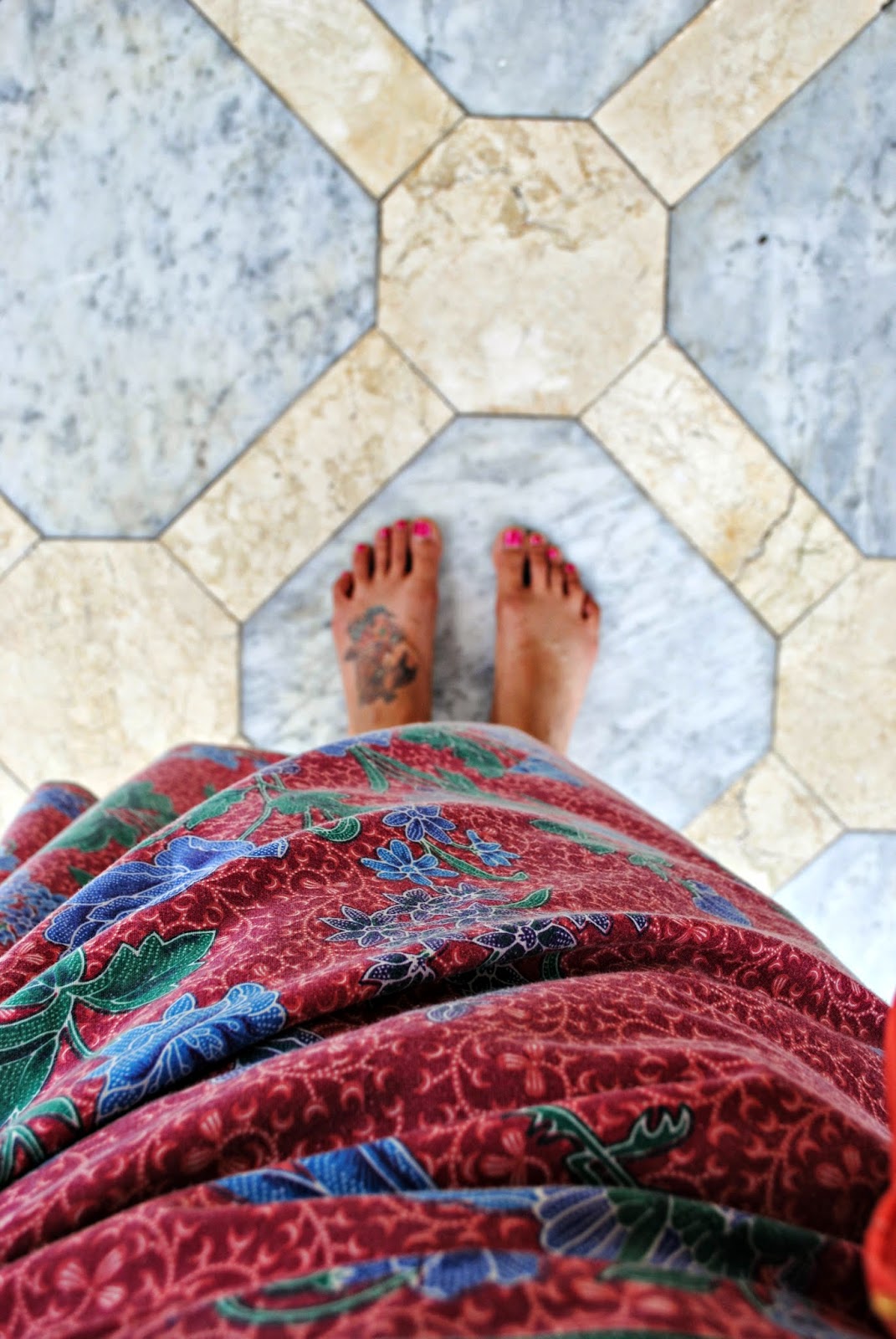 Next up, was Wat Po, another Buddhist Temple.  It was home to a crazy number of Buddha statues, but we were really there to see the giant, Reclining Buddha. 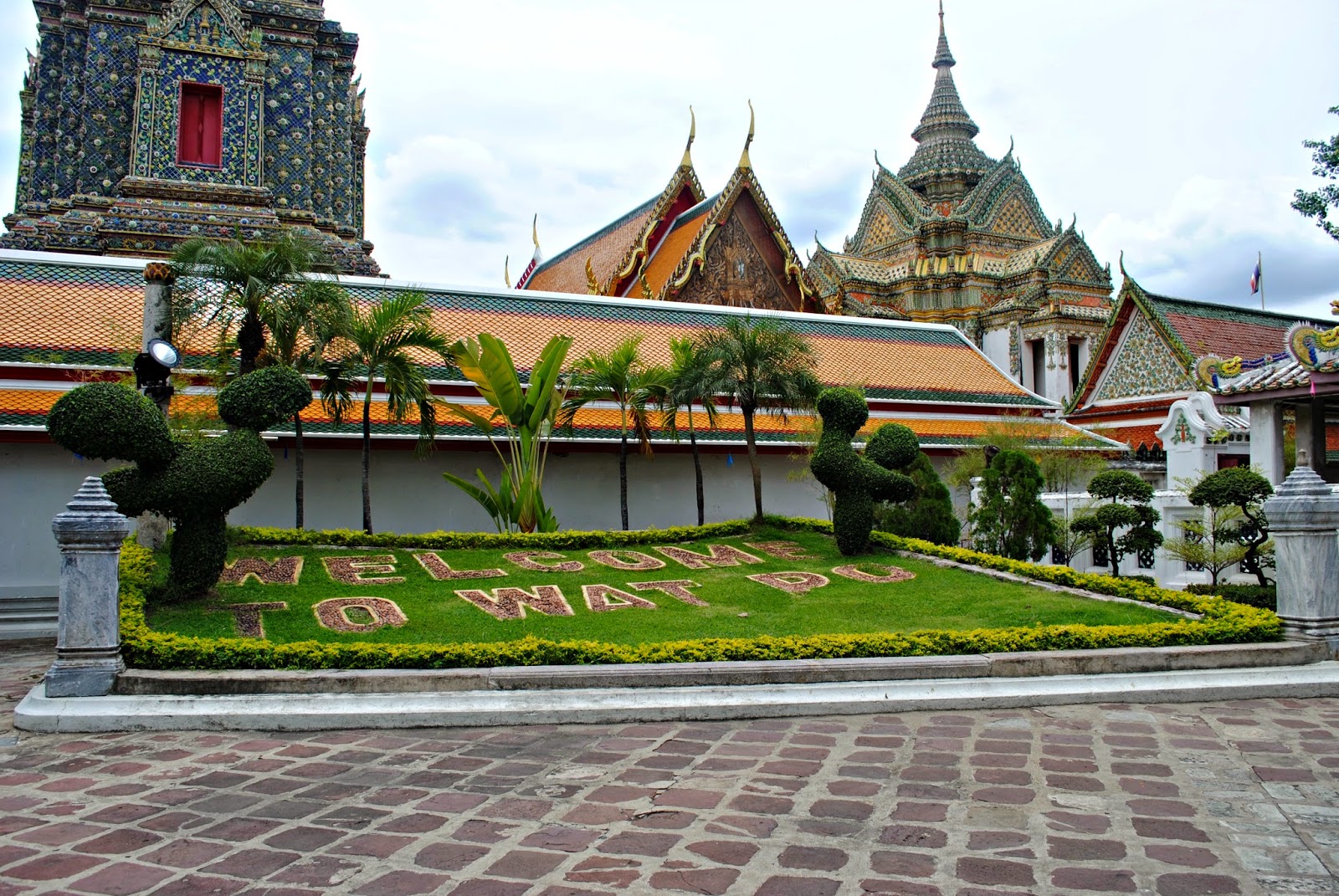 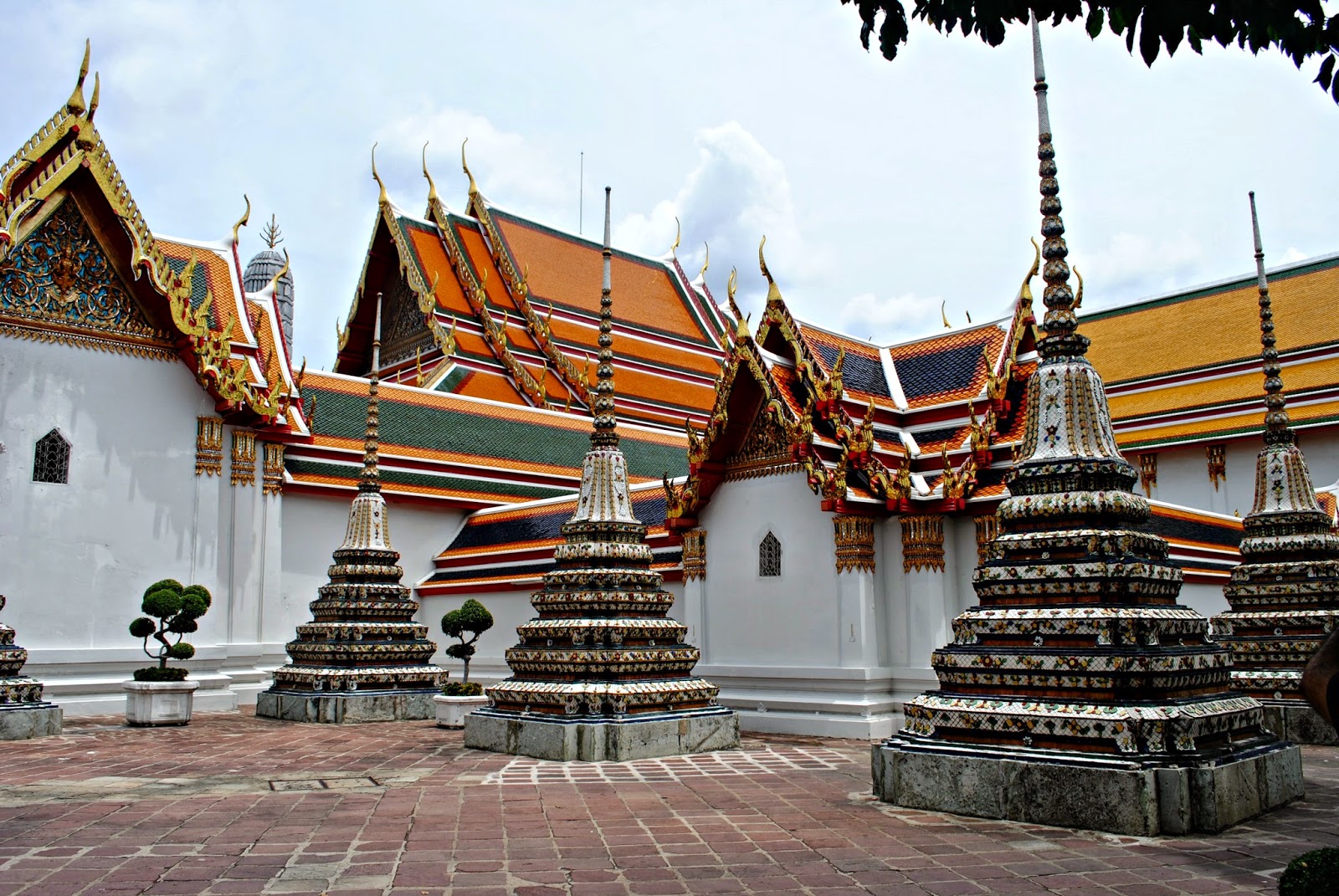 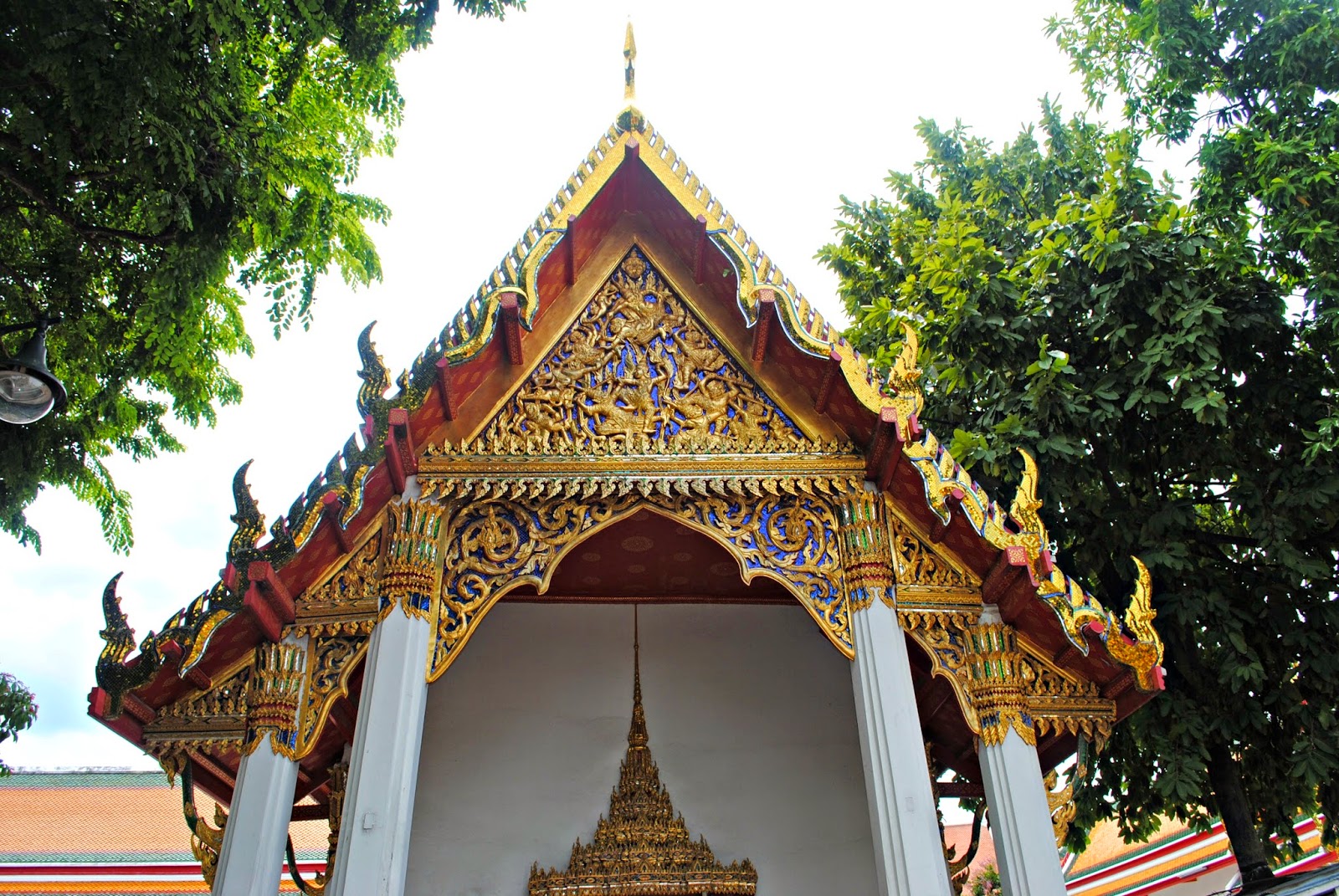 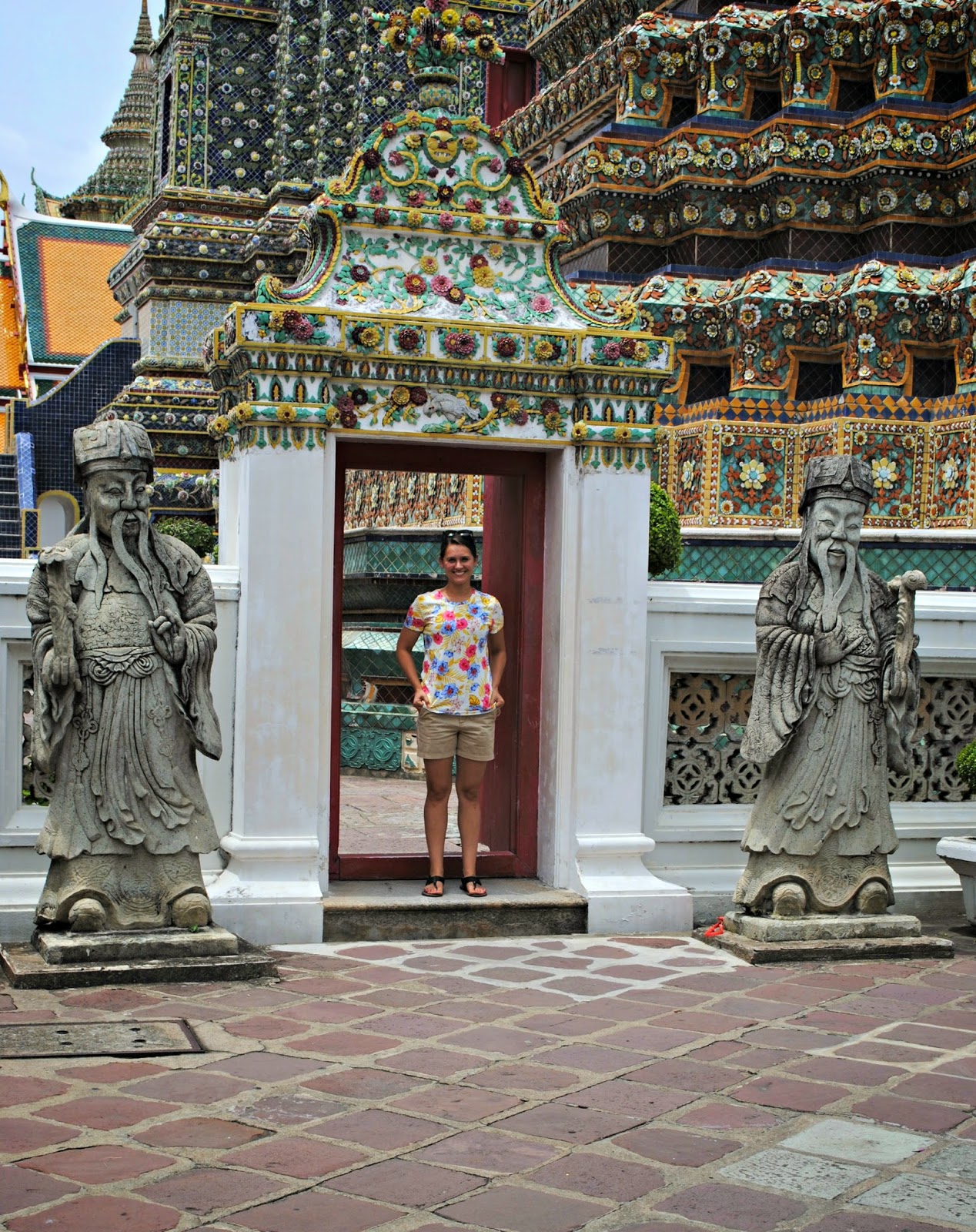 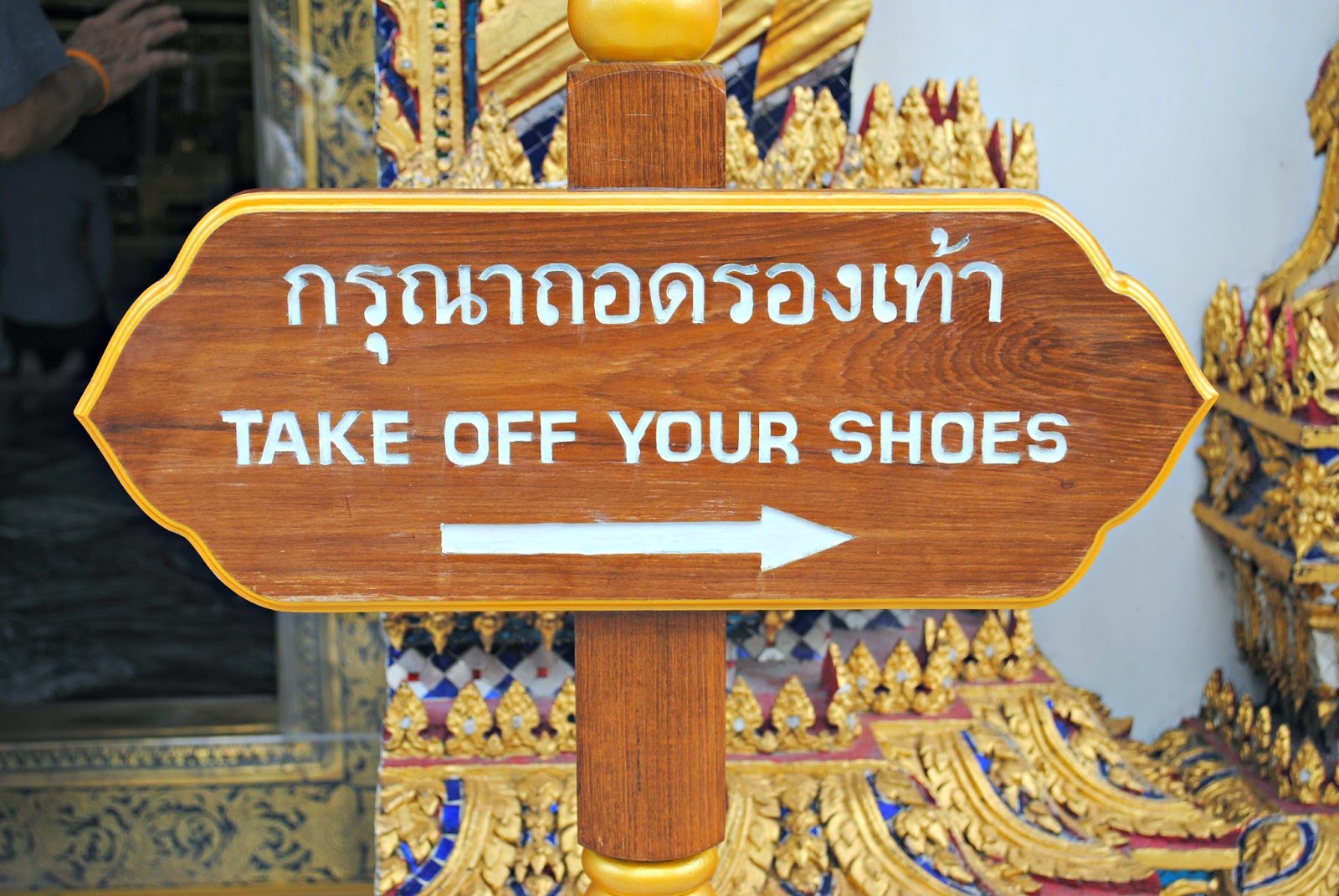 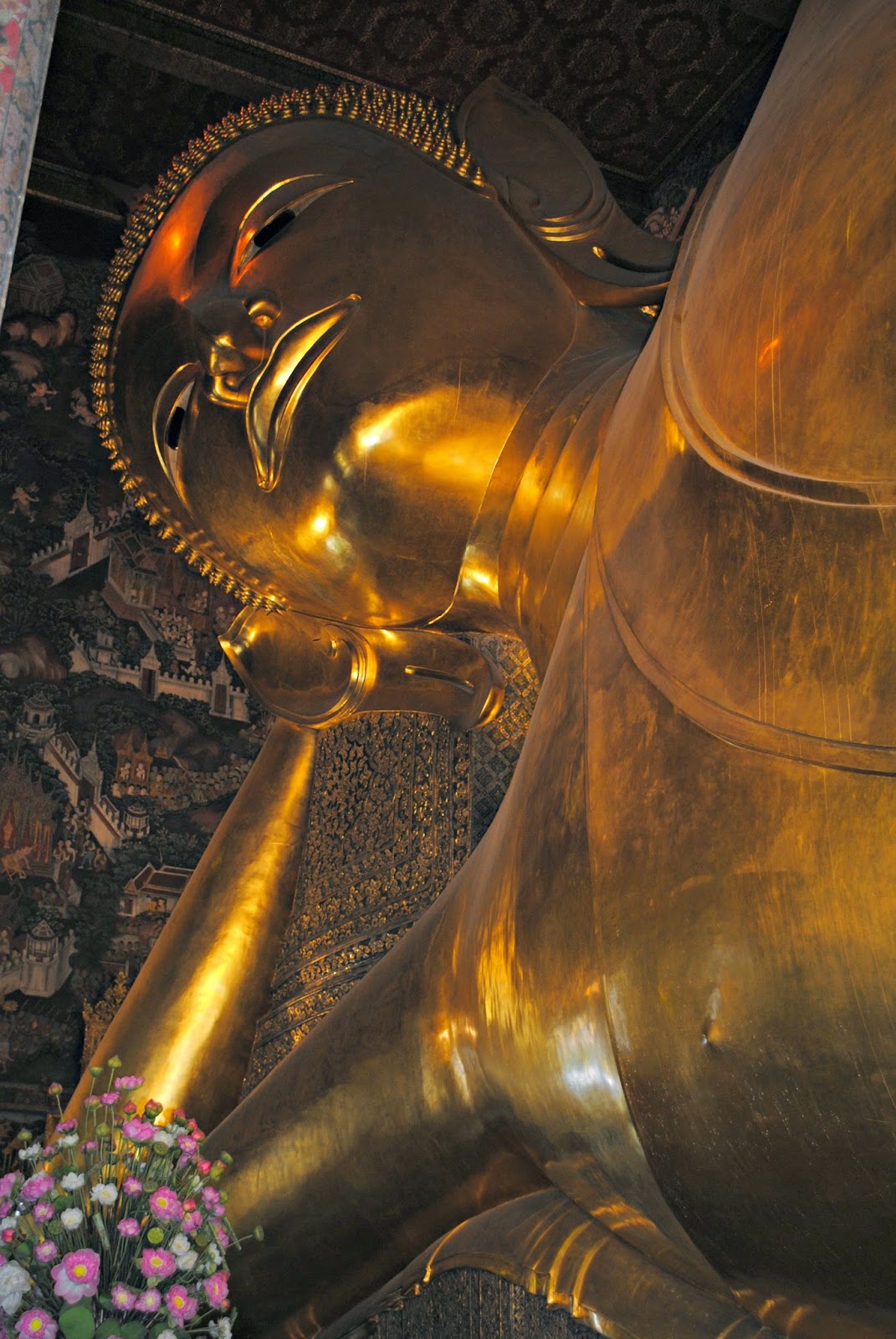 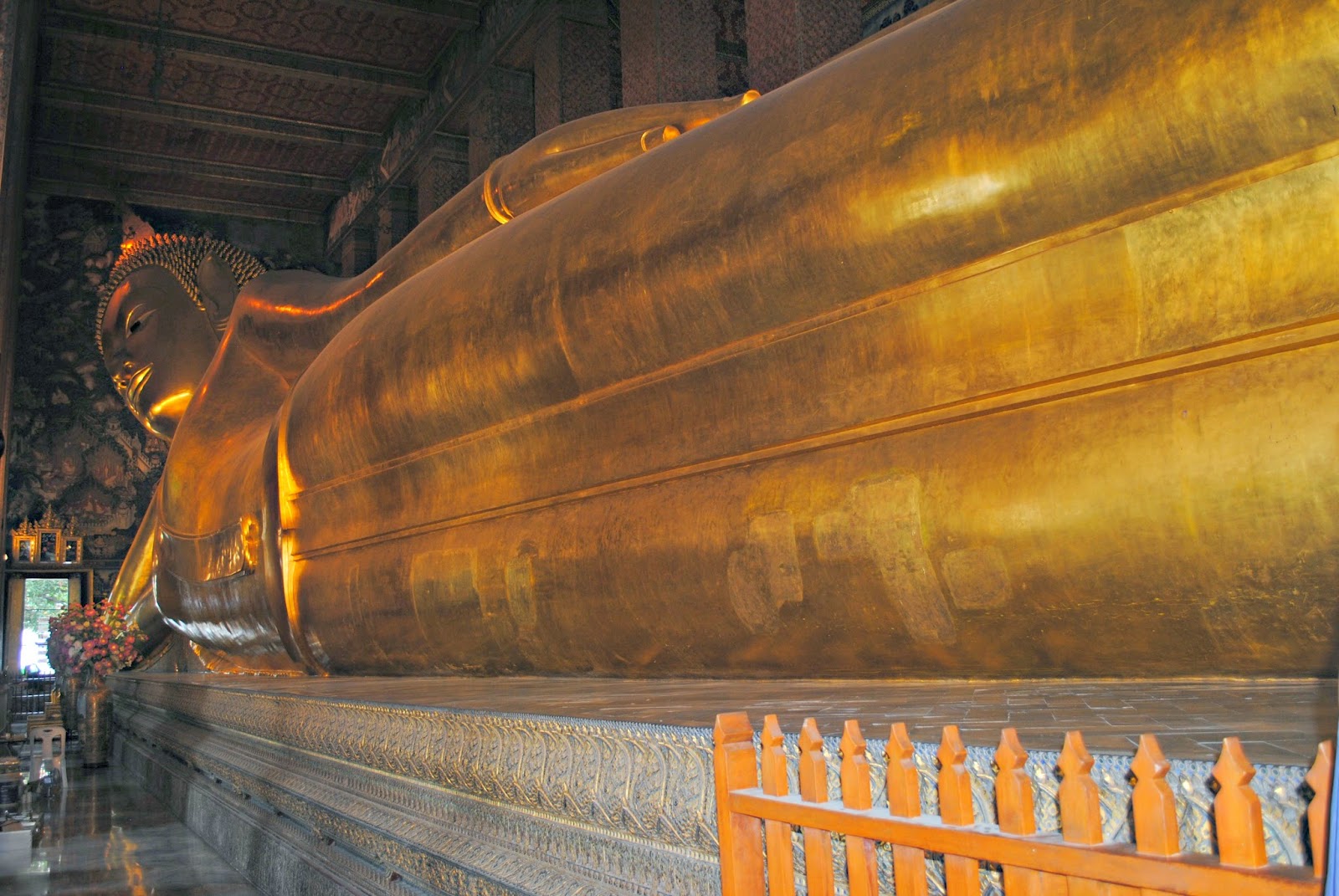 After our two hours was up, we checked out of our hotel and got in a van to head two hours south to Pattaya.  We spent two bumpy hours on a highway whose white lane markers were more like suggested guidelines than anything else.  Someone (me) had to lie down in the backseat because holy motion sickness.  I only saw my life flash before my eyes once.  Ok, twice. 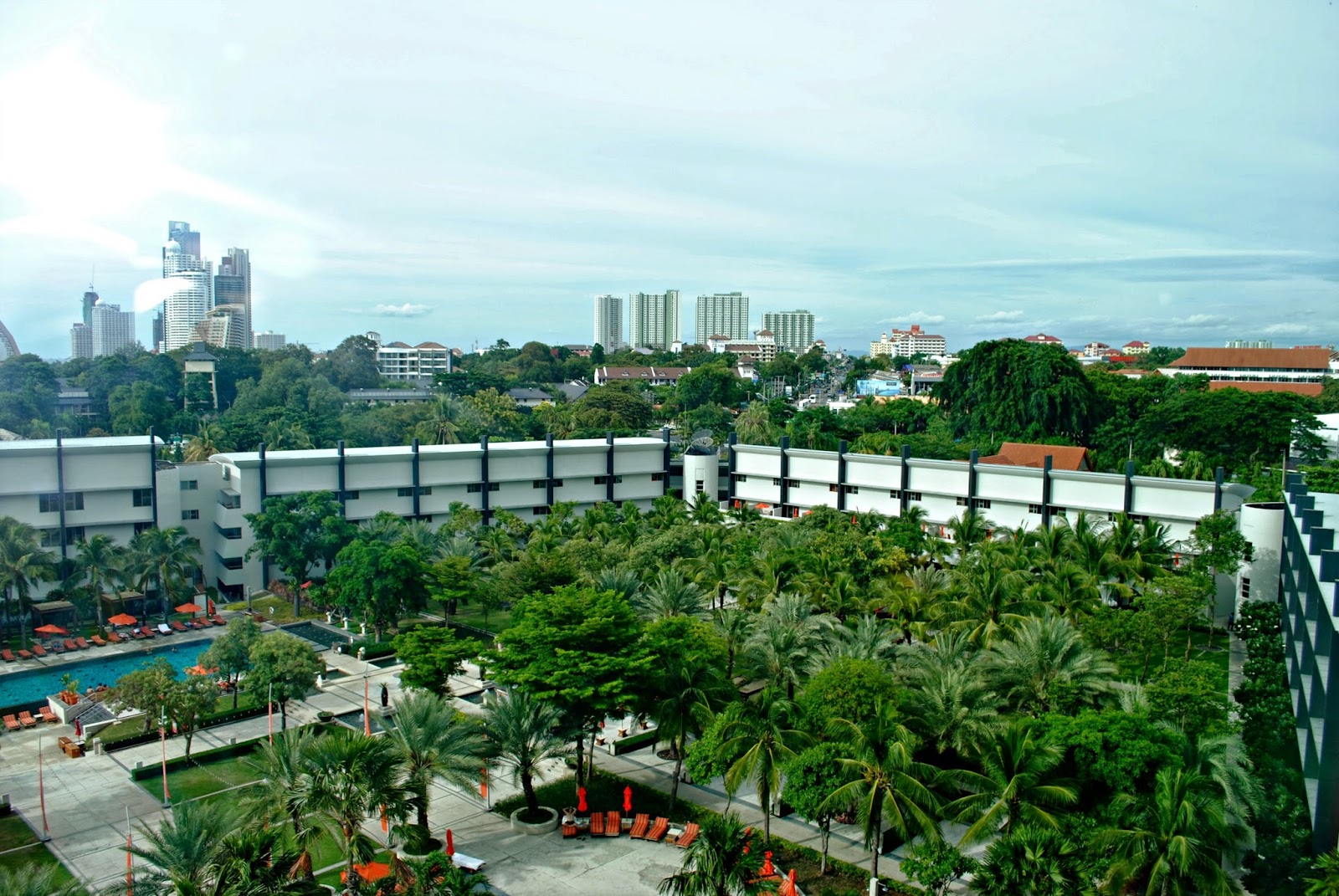 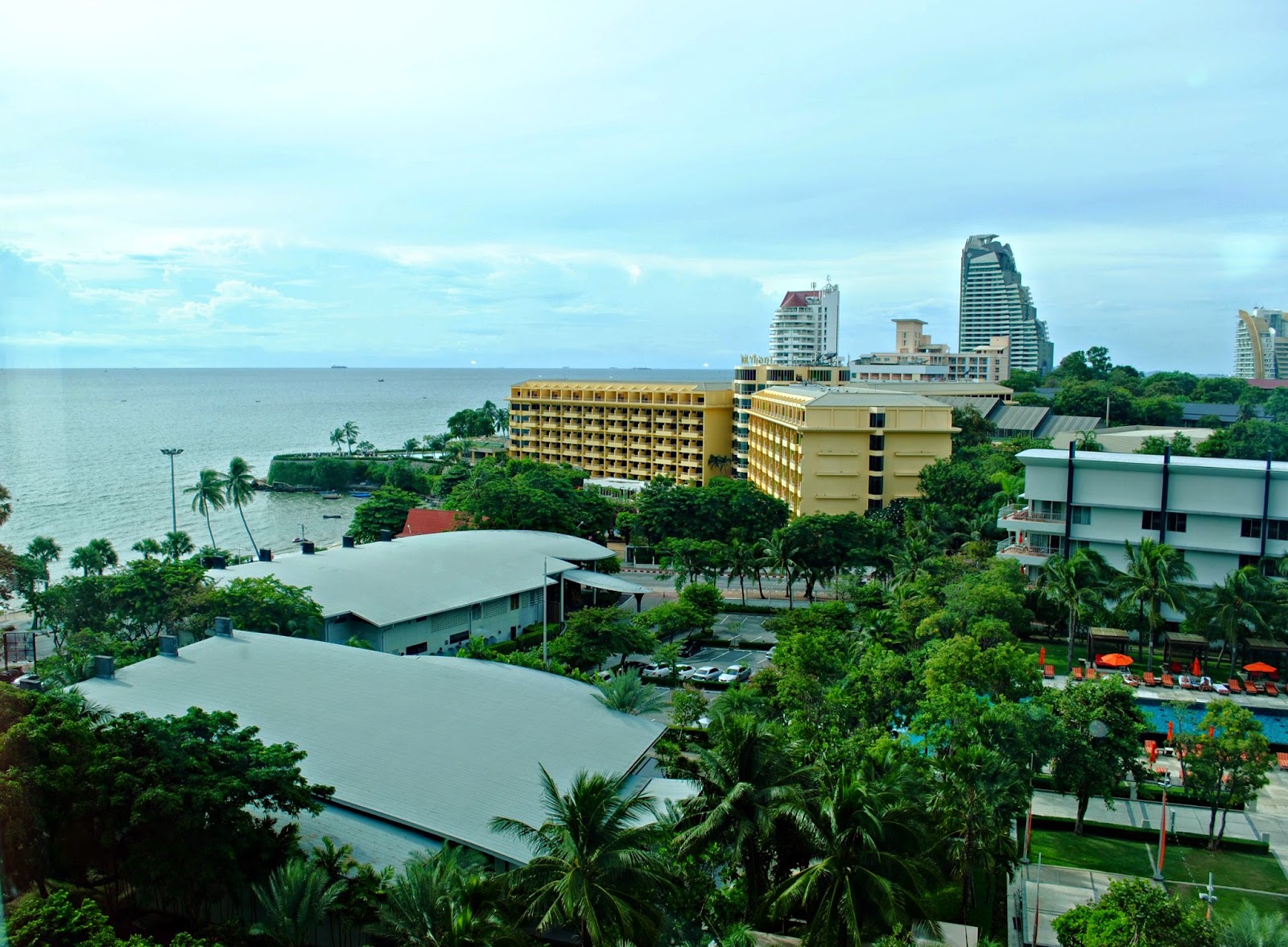 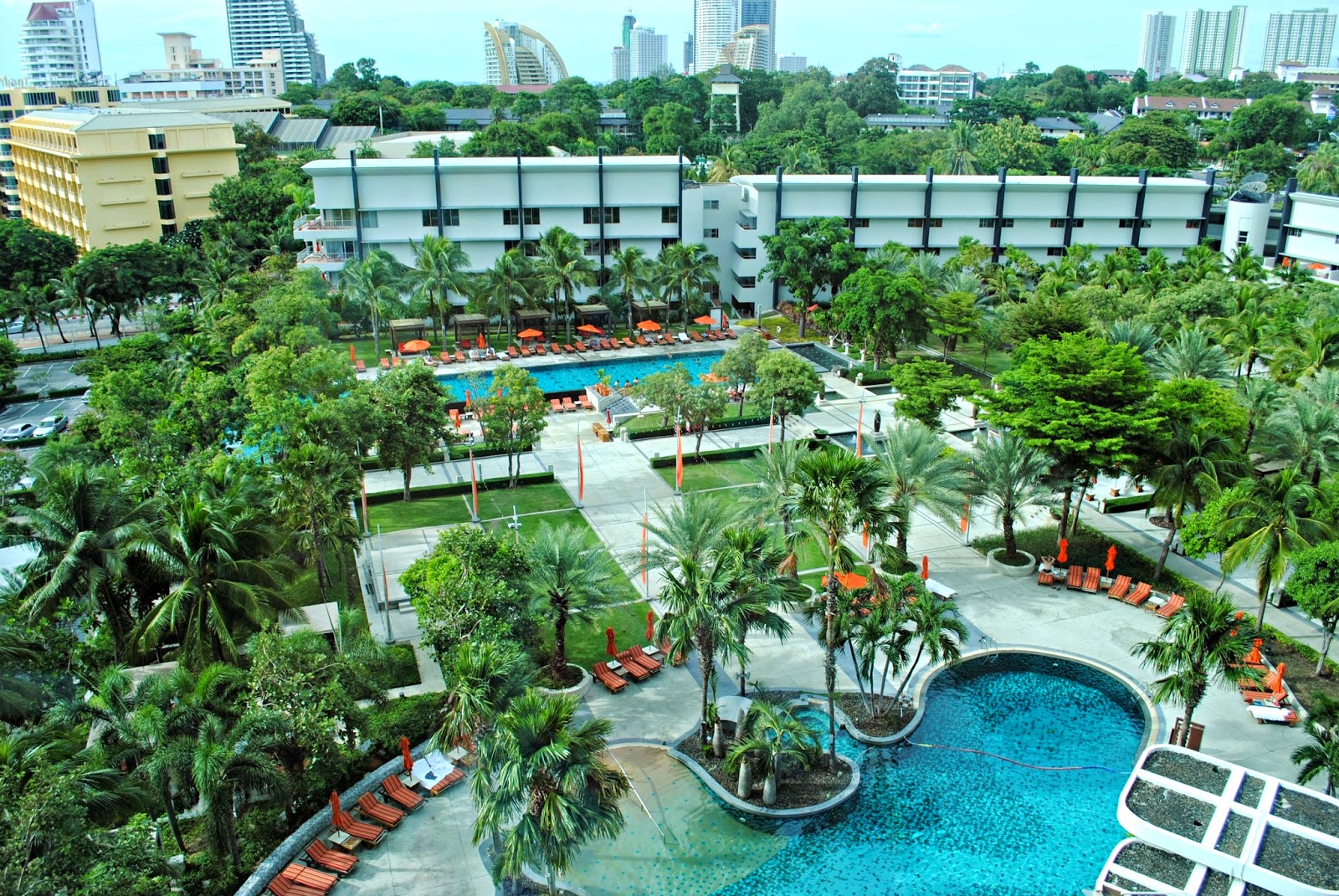 After arriving and changing clothes, we headed to a hosted dinner at Rimpa Lapin.  This would be my first experience with authentic Thai food, so I was nervous.  My intuition was right because from the selections ours hosts chose, every dish was some sort of seafood.  I don't eat seafood, and hadn't eaten since breakfast, so you can imagine how happy (sarcasm) I was to see this particular spread of food in front of me.  I eventually caved and ate the flattened shrimp spring roll, but even that was hard to choke down. 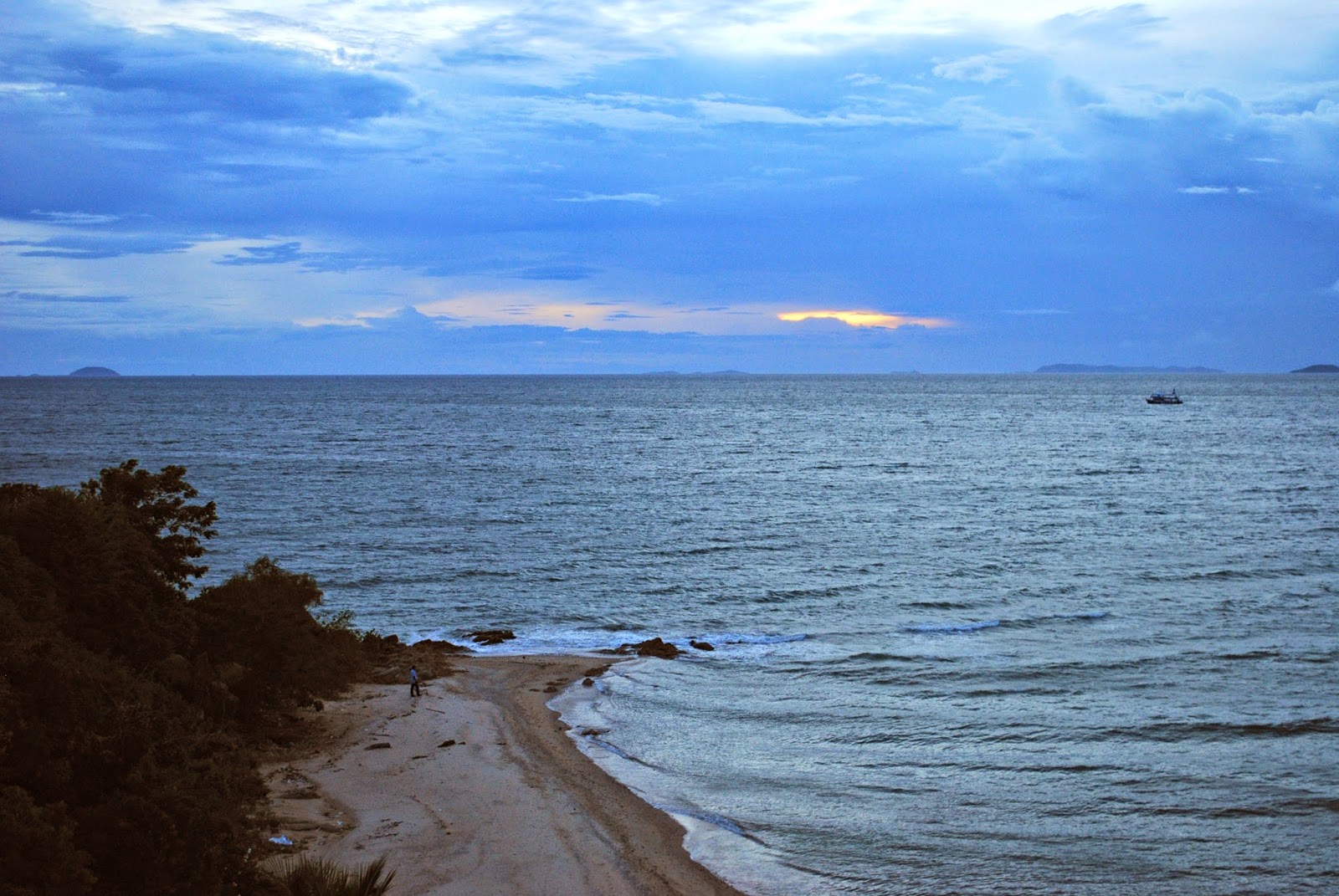 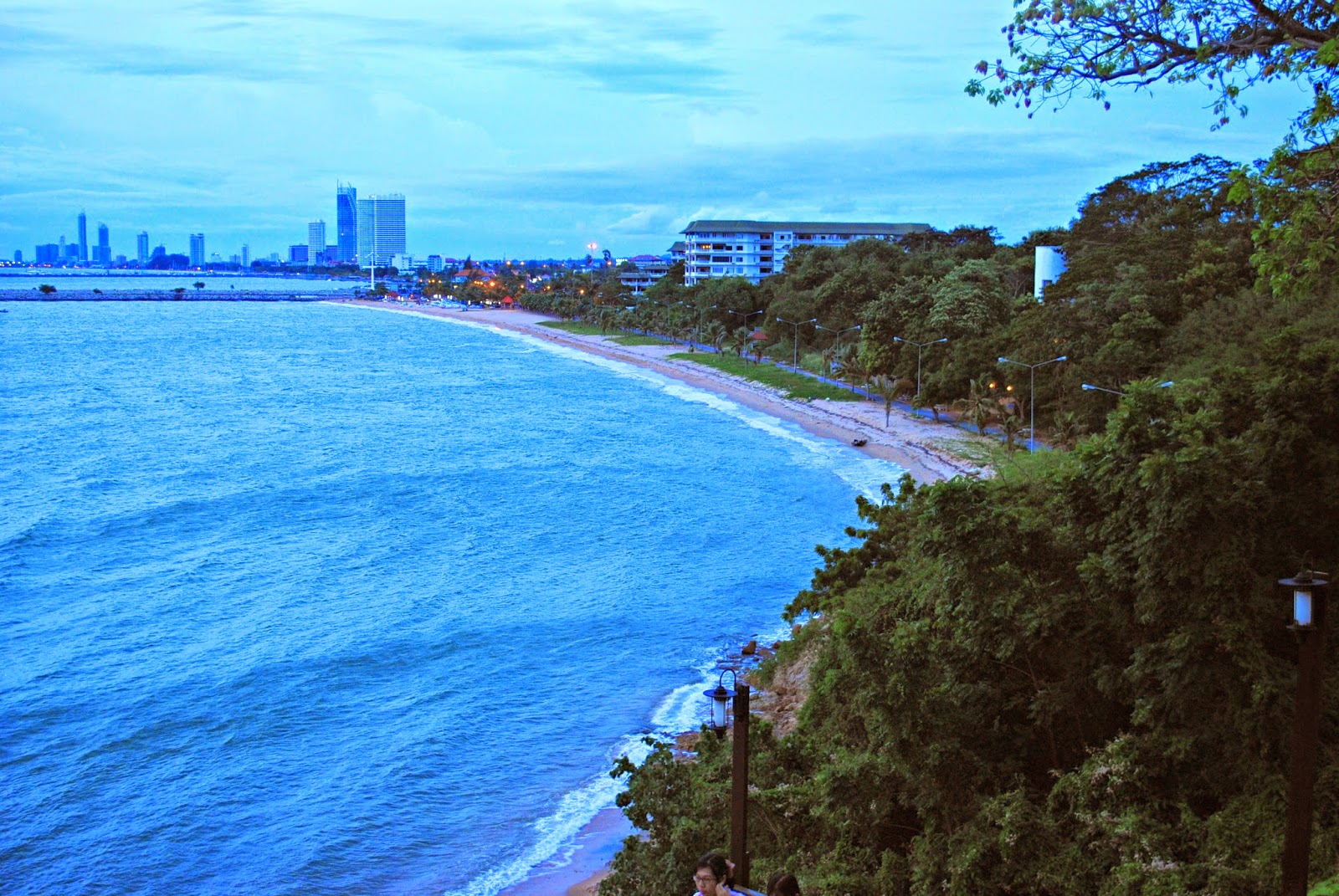 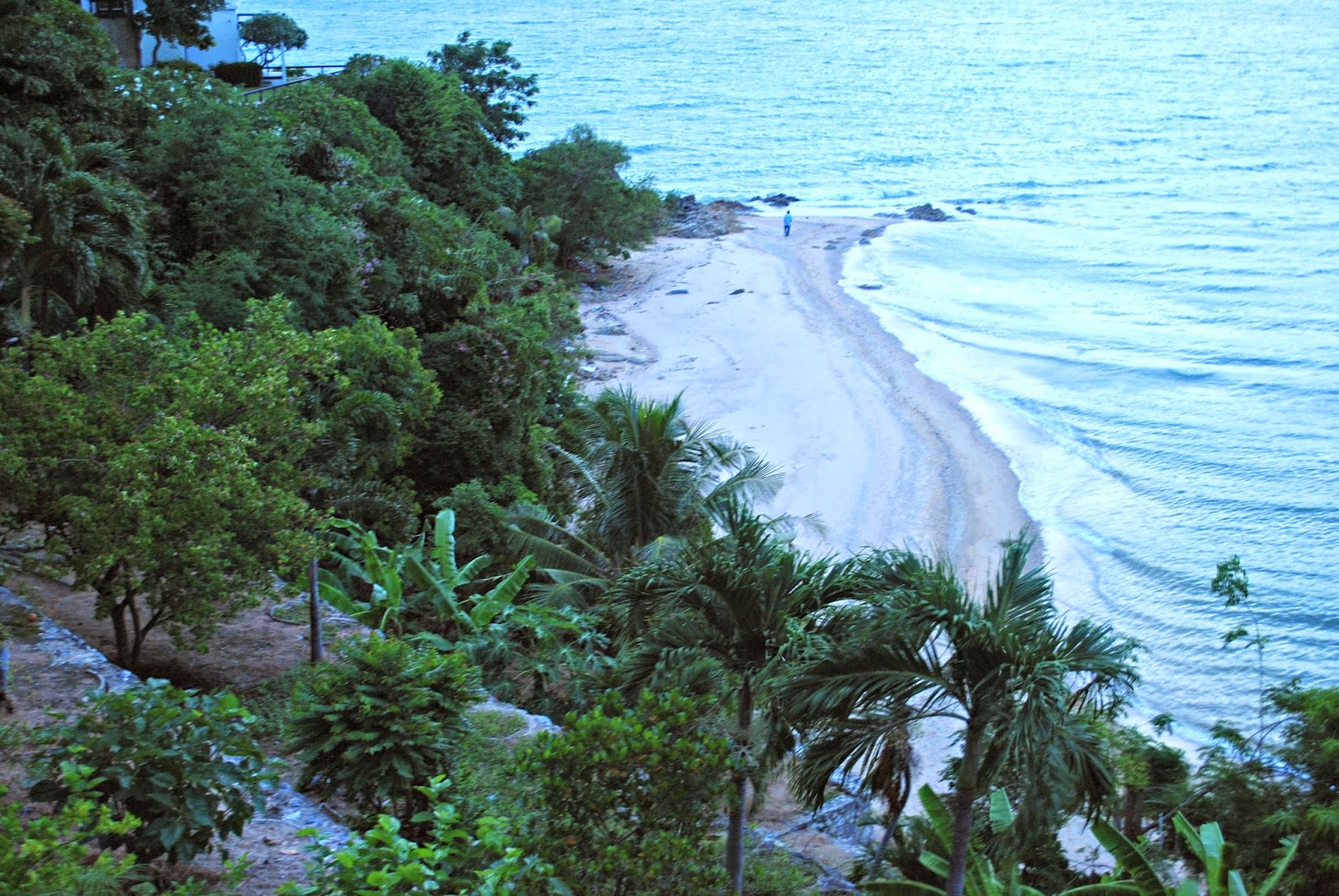 The next two days were full of a two hour commute (thank you, awful traffic) to Sattahip for our daily meetings and dinner at sketchy Pattaya restaurants.

On Thursday, we finished our meeting a tiny bit early and headed back to Pattaya to do something touristy with the little time we had left.  We settled on a quick traditional Thai foot scrub and rub, and 30 minutes of gift shopping.  During the foot scrub I was mostly positive that she was actually scrubbing the skin off of my leg and not just exfoliating it.  I'm also quite certain that she was giggling with her co-workers about the size of my feet.  I had limited baht and limited time, so the gifts bought for family were/are sort of lame.

I saw an insane amount of prostitutes (both female and males dressed in drag), escorts, and brothels.  Bars had names like "Sexy Girl Bar," and others too offensive to mention. It was mildly dirty and incredibly humid.  American electricians would have had a panic attack while walking through the streets because the power lines were nothing but giant nests of chaos.  On a positive note, the Thai people were very nice and friendly.  I was clueless on the proper way to wai, so I stuck to a smile and a head bow whenever someone greeted me or I was trying to say thank you.

One final dinner at a seriously sketchy restaurant (filled with stray dogs, cats, and kittens) and our trip was over.  Another funny story.  I was sitting across from my co-worker and there was an open seat next to her.  We were chit chatting along, when a kitten jumped up onto the chair, causing my co-worker to jump and scream.  I think she thought it was a mouse.  I was laughing so hard that I was crying.  Clearly, one of those had-to-be-there moments, but one I had to share. It really wasn't that funny, but I think I was borderline delusional, so whatever.

We left for the airport at 1:30am local time on Friday (don't worry - the open air go-go bars with the naked dancers were still hopping so we were able to wave goodbye as we passed).  Exactly four days from the time we got there.

The ride to the airport was bumpy, but relatively smooth since there wasn't a ton of traffic on the road at that hour.  We flew to Tokyo, and then I connected to Seattle.  Again, thankful for Delta's in-flight entertainment because I didn't sleep.  The plane was loud (teenage Japanese girls were excited to be coming to the US?) and freezing.  I walked into my house exactly 24 hours after walking out of the Pattaya hotel.

Needless to say, my trip was extremely exhausting.  Extremely isn't even a good enough word to describe it.  Between the time change and the go-go-go nature of the trip, I didn't know what time it was, what day it was, or which way was up.  I missed my family and hated not being able to communicate with my mom (check up on Hammy) as much as I wanted.  Whenever we did get to talk she would give him the phone and it only a second of hearing his voice for my throat to clench and the tears to form.  This trip and being away from him just felt different than others.

So, there you have it.  My first (and hopefully last) trip to Thailand.

I am thankful the experience and opportunity to go to some place so different than the United States, but I have never been so happy to hear, "Welcome to Seattle, where the local time is 9:15am..."