Warning: This post is allllll about potty training.  Stop reading if you don't want to hear about my kid's bodily functions.  I'm writing this mainly so I can document progress and have something to look back on when we go down the potty training road with Zoey.
Today was not so great.  It wasn't bad, but it sure wasn't as good as yesterday - even from the get go.

I'm always awake before Cam and I assumed last night would be no different.  But aside from many trips to give Zoey her pacifier, she slept great last night - and I slept in a lot later than normal.  I was woken up at 6:30 by hearing Camden crying from his room and immediately felt a sense of dread/fear.  I went into his room and got him to the toilet to see he had a crazy full pull up, complete with poo.

Just the way we wanted to start our day.

I assured him that it wasn't his fault and that it was "mommy's fault."  I felt awful that I wasn't awake and prepared for him to wake up.  There's no way for me to know if that would have made a difference - but I'm really confident that it would have.

The morning got better after that.  Cam had a couple successes (and no accidents) while we watched the Seahawks game.  We could tell he was getting super restless and stir-crazy from being inside for the past two days, so I put some pants on him, took him outside for a little bike ride around the drive way "race track" and to play some soccer on the back deck.  In between "I gotta go potty's" of course! 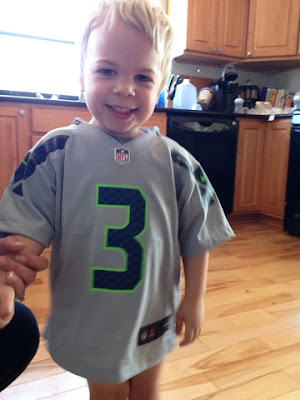 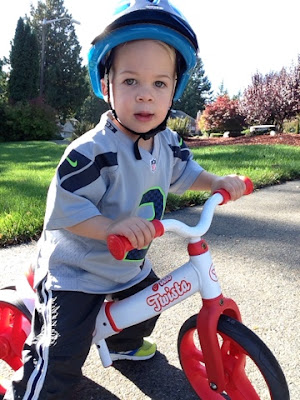 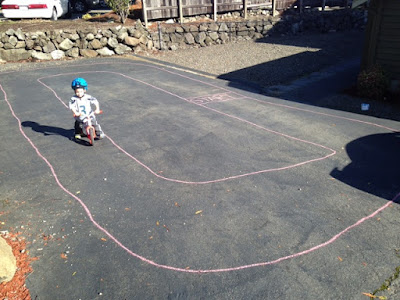 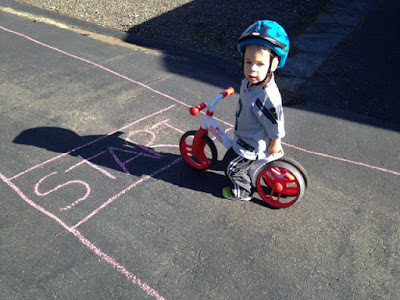 Ryan put him down for his nap so I could go buy a used (and amazing) glider for Zoey's room and it sounds like Cam insisted on wearing a pair of his fleece footy pajamas because "I feel safe" wearing them.  Whatever, buddy.

Potty training must wear a guy out because he slept for three and a half hours and we had to wake him up from his dead-to-the-world-slumber.  No surprise that his pull up was pretty dang wet when he finally got up.

A ba-zillion more "Tell Mommy when you have to go potty's!" and "Keep 'em dry, buddy's!" later and he had a couple more successes and a couple accidents in the evening.  The accidents were really discouraging to me because he had done so well on Day Two and in the morning (aside from his early morning accident).  But I realize that this is still very new to him and overall, he's doing really well.  He had the first accident while watching the iPad - I told Ryan I didn't want him watching it while potty training because he starts watching Donald Duck (or the dreaded Surprise Egg videos) on YouTube and gets totally sucked in.  I'm not really sure why the second accident happened.  I was sitting right there playing trains with him and then all of a sudden I noticed he was peeing.

Anyway, it wasn't the greatest day - and certainly not how I thought our Day Three would go based on the success of yesterday.  Ryan and I are both off of work tomorrow for Columbus Day, so we'll take advantage of one more day of training before heading back to work and daycare on Tuesday.

Thankfully there were more successes than accidents, right?

I'll spare you any updates after today and resume talking about other super important things in our life.  Ha.