Weekend in St. Louis {Part One}

This Peters Family just returned from a super quick (and crazy) long weekend trip to St. Louis for Ryan's cousin's wedding and our godson Rory's baptism.

We flew out of SeaTac on Thursday morning.  Someone was incredibly excited that he was finally getting to go on the airplane and as a bonus, got to ride the "school bus" shuttle from the parking garage to the airport. 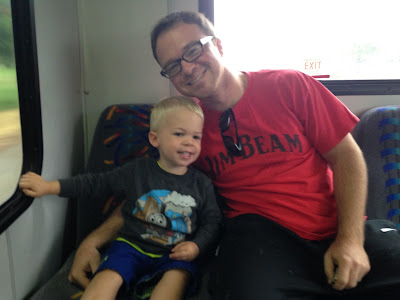 I wasn't super worried about how the kids would do on the flight - Camden has flown a lot and Zoey is a good little baby.  Our flight was supposed to depart at 12:10pm (right at Camden's nap time).  With that said, I'm sure you can deduce that it in fact did not depart on time.  Two gate changes and an hour and half delay later (an hour of which was spent on the godforsaken plane), and we were off. 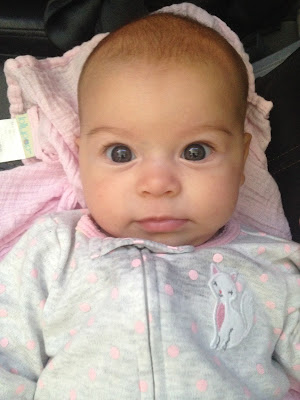 I got Zoey to sleep while trying to convince a tired Camden to lay his head down on my lap.  He wasn't having it and eventually pointed to my Ergo and said "I want in there."  So, in he went and about 30 seconds later, he was comatose.  While Cam was in the Ergo and Zoey was asleep with Ryan, a flight attendant asked me if they were twins.  Not even kidding. 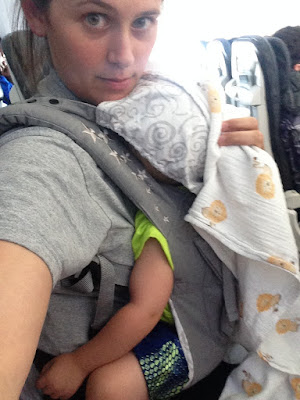 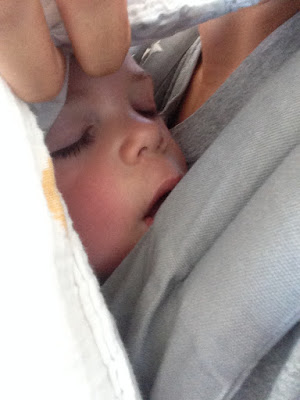 The flight was smooth and uneventful.  Camden slept for about an hour and a half and Zoey snoozed (and ate) off and on.  After the hour we spent on the plane just sitting at our gate and the three and a half hour flight to St. Louis, we were more than ready to be done with airplanes for the day.

Aunt Cara picked us up at the airport and was a welcomed sight. 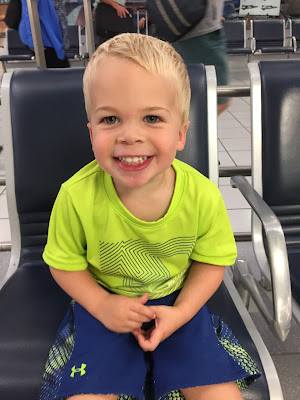 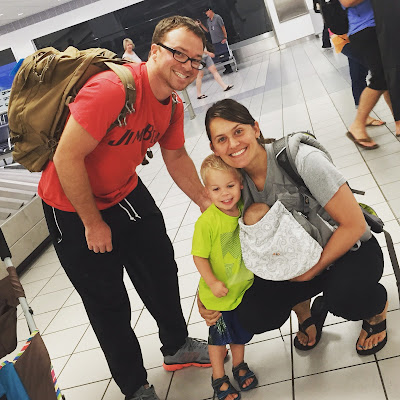 We made it back to her house and were welcomed by the rest of the family (sans Rory who was snoozing like the good, chunky baby he is!).  I let Camden get some of his crazy, pent up energy out playing with Liam and being the mean mommy that I am - made him go to bed.  The four of us were sleeping in one room together so I put Zoey to bed first.  Cara had set up a pack-n-play for Cam but he wasn't having it so I moved a twin size blow up mattress into the bedroom and laid with the overtired terror for two hours before he fell asleep (at 11:30pm Central Time).

You can imagine how thrilled I was when I was feeding Zoey at 6:20am Central Time Friday morning and I see my elder cherub pop his head up wide awake, ready for the day.  I made him lay in bed with us until 7:00 (still only 5:00am on his little body clock!) and then we went upstairs to start my intravenous coffee drip.  I mean morning coffee.

Friday was low key.  The kids and I hung around the house with Cara, Liam, Rory, and my mother-in-law.  And I drank more coffee. 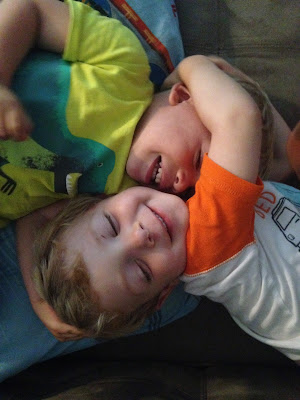 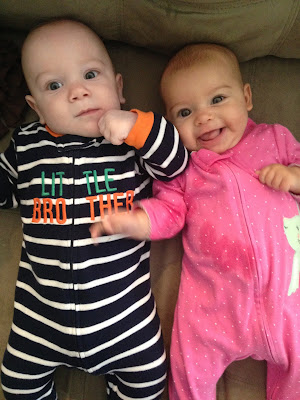 One of my favorite things about going back to St. Louis with Ryan is that I almost always get to meet up with some of my girlfriends, too.  Friday afternoon I met Alex and her family at a local park/playground.  Her husband, Mike, chased (er, supervised) the boys around the play area while the girls just laid there so she and I could catch up.  It was so great to talk facet-to-face and I kept thinking how funny it is that through social media, I feel like I know her kids (even though this is only my third time meeting Patrick and first time meeting Rosie) and am already so up to date on her life!  She is an amazing and passionate photographer and was gracious enough to take some pictures of the kids and me during our visit.  I'll post those in a separate post because, trust me, they deserve their own.

After we left The Mooney's I took my crying children back to Cara's and waited for Becky to arrive. She was dying to see Camnado and meet Zoey.  Cam would give her hugs and kisses, retreat downstairs to play with Grandma and Liam for a while, come back upstairs for Aunt Becky lovings, and repeat, repeat, repeat.  It was so great to sit and talk and laugh with Beck and hear about her new job! 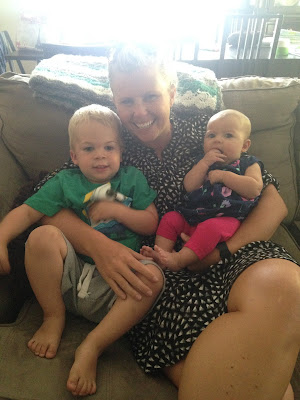 One of my next favorite things about going back to St. Louis is that the kids get to spend time with their three (yes, three!) great-grandparents.  Maybe this isn't such a big deal to some people, but for someone (me!) who doesn't have any living grandparents, let alone great-grandparents, this is huge!!

This is Ryan's mom, Chris, with her parents, Bob and Carol, and her four grandkids.  Camden, Zoey, Liam, and Rory are four of Bob and Carol's six great-grandkids - Zoey being the youngest (and only girl!). 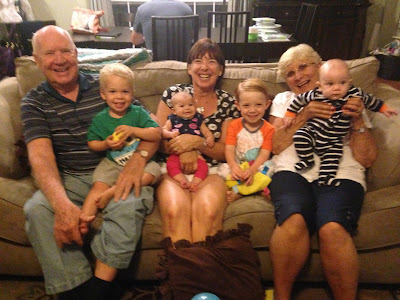 Friday night Camden only needed me to lay with him for an hour before he fell asleep and by the grace of God slept until 7:45am Central Time Saturday morning.  That's still only 5:45am on his body, but it's much better than the previous morning's 4:20am wake up call.  His sister won the "favorite child of the morning" award and slept until after 9am.

We had a slow morning and then it seemed like it was all of a sudden time to get ready for Ryan's cousin Anna's wedding.  The big boys stayed behind to nap during the ceremony so Cara and I only had to get the babies ready and I'm pretty sure I will forever be swooning over these two in their wedding-wear. 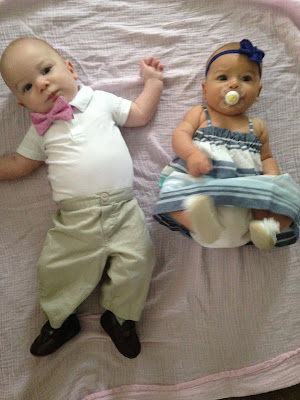 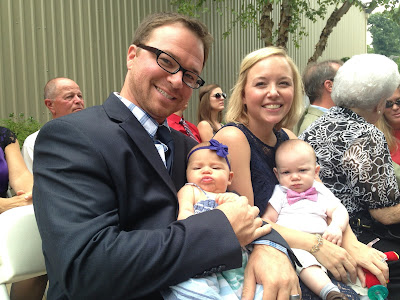 The ceremony was beautiful, short, and sweet so we were able to get back home where my wild child was already awake from his (very short) nap and ready to rock.  I guzzled more coffee before we packed up and took the crew to the reception.

I may or may not have gave thanks for the invention of the iPad about 12,000 times during the beginning of the reception because it was the one thing that kept Camden from running circles on the dance floor... Around the cake table.  I don't know how many times I tried to tell him that the dance floor was for dancing or walking, but he was hell bent on being defiant and running, or jumping like a frog, or twirling.

And his great-grandpa wonders why I said "no cake for Camden."  I know, mean Mommy.  But seriously, do you think my child needs any help in the energy department?

Like a moron I downloaded it the very next day.

The Webb's and I waved our white flags, packed up the kids before they imploded, and set out for home.

Posted by Lauren Peters Blog at 10:00 AM