I mentioned before that we spent the long, President's Day weekend in the effing cold Midwest while I was being inducted to the SIU Athletic Hall of Fame.  While the induction experience was pretty incredible, it was made better by getting to spend time with Ryan's family and see a few of my college teammates.

In the six plus years since I left the Midwest, I forgot just how bone-chilling cold it could get and how the wind can whip through the wide open space.

Ryan, Camden, my parents, my sister, and I all flew out to St. Louis on Thursday morning.  I felt like a completely different person than my typical high-strung-pre-flight-self because I knew that it wasn't just up to me to keep Cam entertained on the three and a half hour flight.  I had six extra hands (eight if you count sleep-deprived Ryan) and just knowing that was like a belated Christmas present.

We got settled in our seats, Ryan immediately fell asleep (he is on graveyard so got home from work at 6am and we left for the airport shortly after), and then we waited on the plane for an hour while some mechanical issues were fixed and a sick passenger was taken off the plane.  I could tell that Cam was getting really sleepy at this point, but I couldn't strap him into the Ergo until we took off and were in the air.  He ended up drifting off to sleep just sitting in my lap -- totally one of those singing angels moments.  This was our first air experience having to pay for his seat (since he is over the age of two) and I'm pretty sure he sat in said seat for maybe seven minutes.

He slept and I sat uncomfortably in my seat, patting his bottom, and sending death stares to the extremely obnoxious family sitting in the row in front of us.  Seriously, loudest kids ever.  Cam slept for about an hour and 15 minutes or so and after he woke up I happily passed him across the aisle to my family to entertain him.  He wanted to watch a show so I reached into my backpack to grab my laptop - only to find that his milk had leaked (I assume from the altitude change) and had taken residence all over my Mac.

It was hard to tell just how much milk had seeped out and how much actually got on the laptop, so I wiped it off, booted it up, and was happy to see that it turned on no problem.  I handed the spritely child and laptop to my sister so they could watch Bubble Guppies and it was only a few minutes later that Rachel hesitantly told me, "It shut off."  Mother effing eff.  Knowing there was nothing I could do while flying at 32,000 feet, I told myself to let it go and not worry about it.

We landed in St. Louis, got all our crap, walked outside to be greeted by 20 degree temps and wind, and made our way to Ryan's sister's house.

Camden was so excited to see his cousin Liam, who turned three in October, and I'm pretty sure the feeling was mutual.  The two of them were really entertaining (not to mention heart melting) to watch  interact the whole weekend.

Friday morning was quiet before we headed south to Carbondale.  Cara captured the pajama-clad boys looking out the window to make sure their daddies weren't leaving their sight. 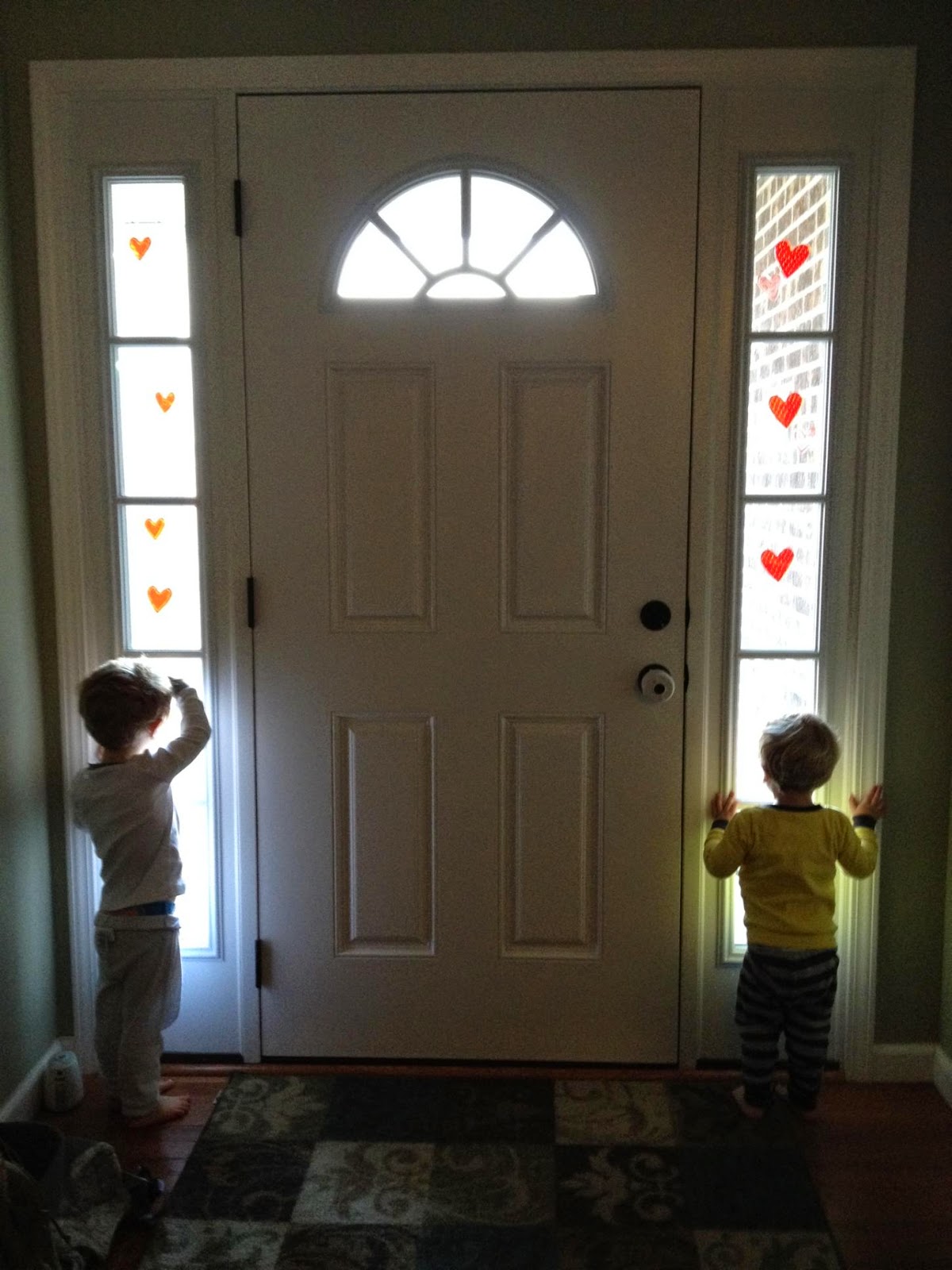 Saturday morning in Carbondale we got to see my teammate, Krystal, and her husband and daughter, Bella, when they joined us for a chilly swim in the hotel pool. 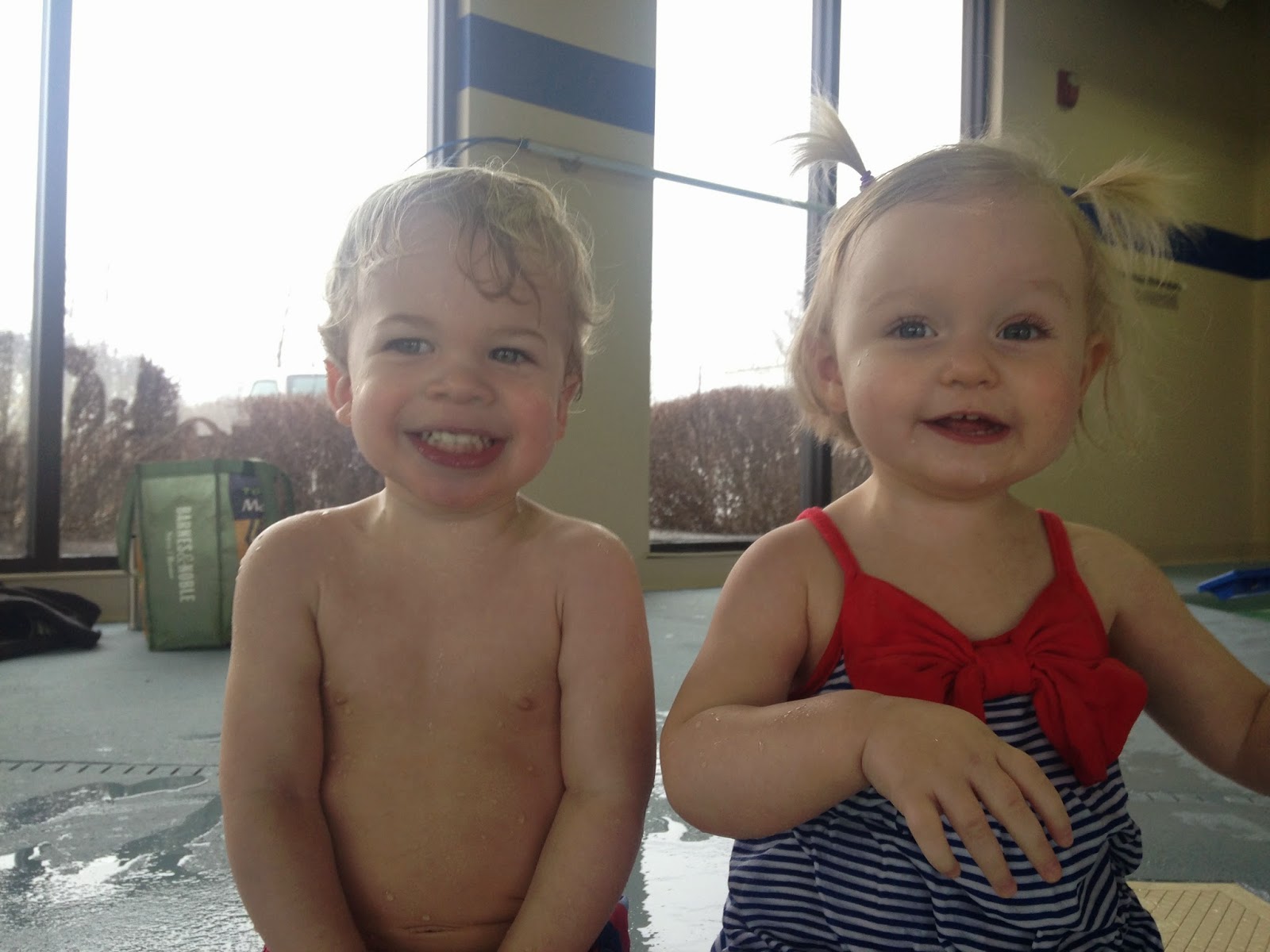 I am kicking myself for not getting a picture with Krystal, but glad we at least got a picture with the kids.  They last saw each other at Becky's wedding.

Speaking of my college roommate, Becky, we got to see her when she came to our hotel and then again when she and her husband ate lunch with us at Quatro's.  Clearly, I really suck at documenting reunions with my girlfriends because I didn't get a picture with Krystal or Becky.

On Sunday morning we headed back to Columbia.  My parents and Rachel were flying back to Seattle, and Cara was hosting an open house baby sprinkle for us (and baby sister) so Ryan's friends and family could stop by and visit. 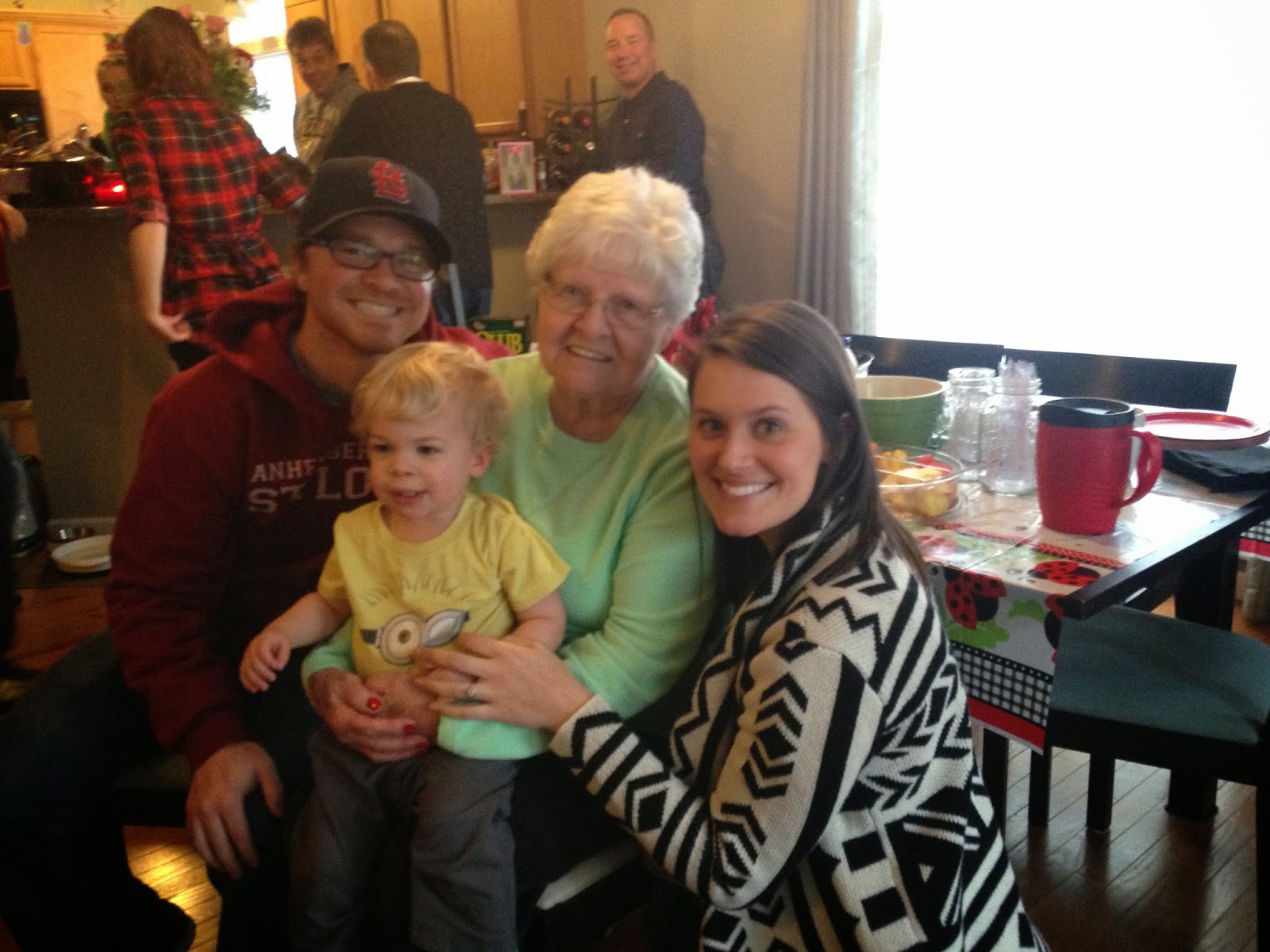 The boys were the primary entertainment during the open house, so come the early-evening, they were ready for some cozy, quiet time and settled in to be adorable and watch a movie together. 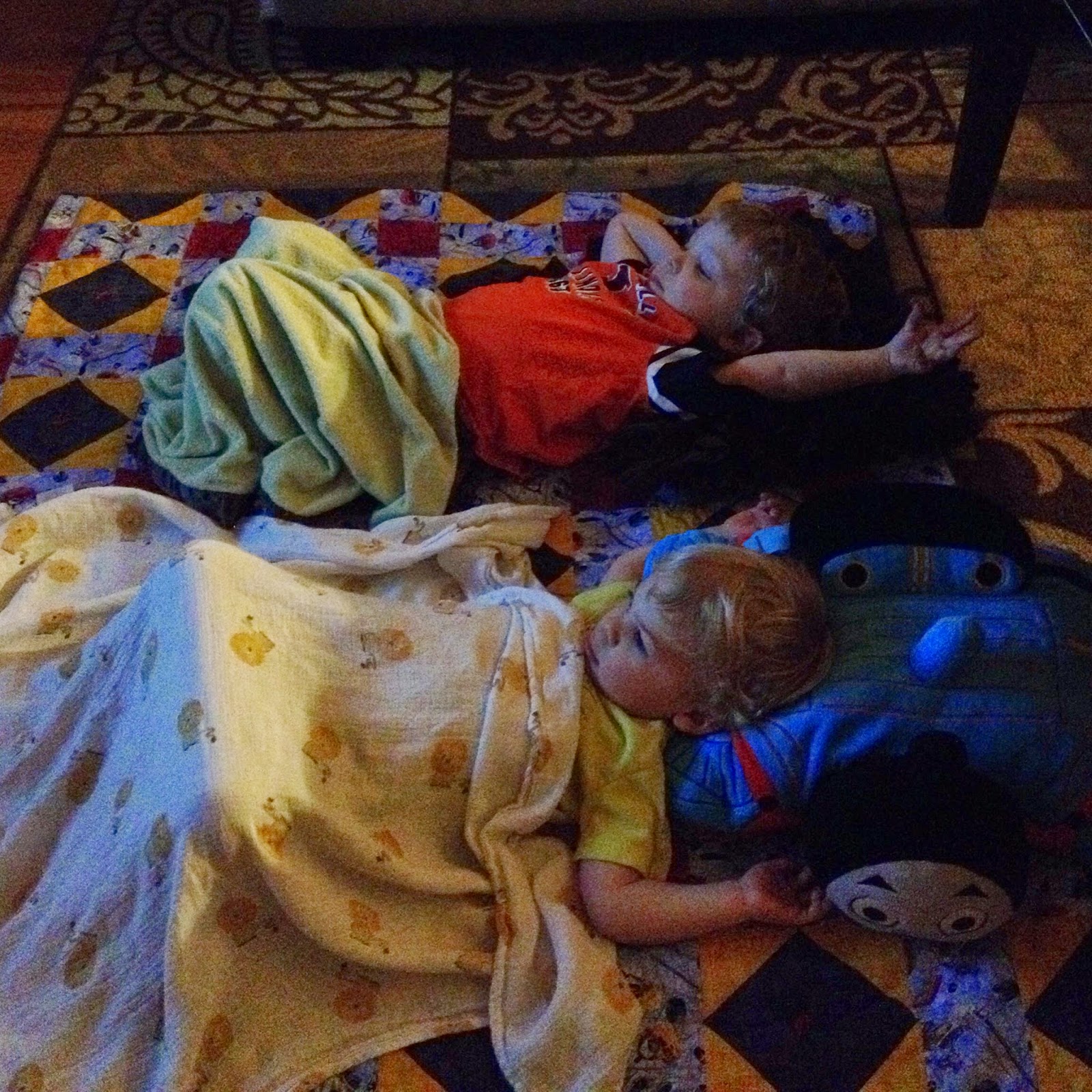 Weathermen and women were calling for five to nine inches of snow to fall starting Sunday night and carrying on through Monday.  Considering we were scheduled to fly out Monday night, you can guess how elated I was to hear this forecast.  I hoped and hoped that it would miss us or at the very least, that the roads would be clear by the time we had to head to the airport.

It never ceases to amaze me just how entertaining certain things can be to kids.  These ladybug balloons, for example, kept the boys bopping busy for a good hour on Monday morning. 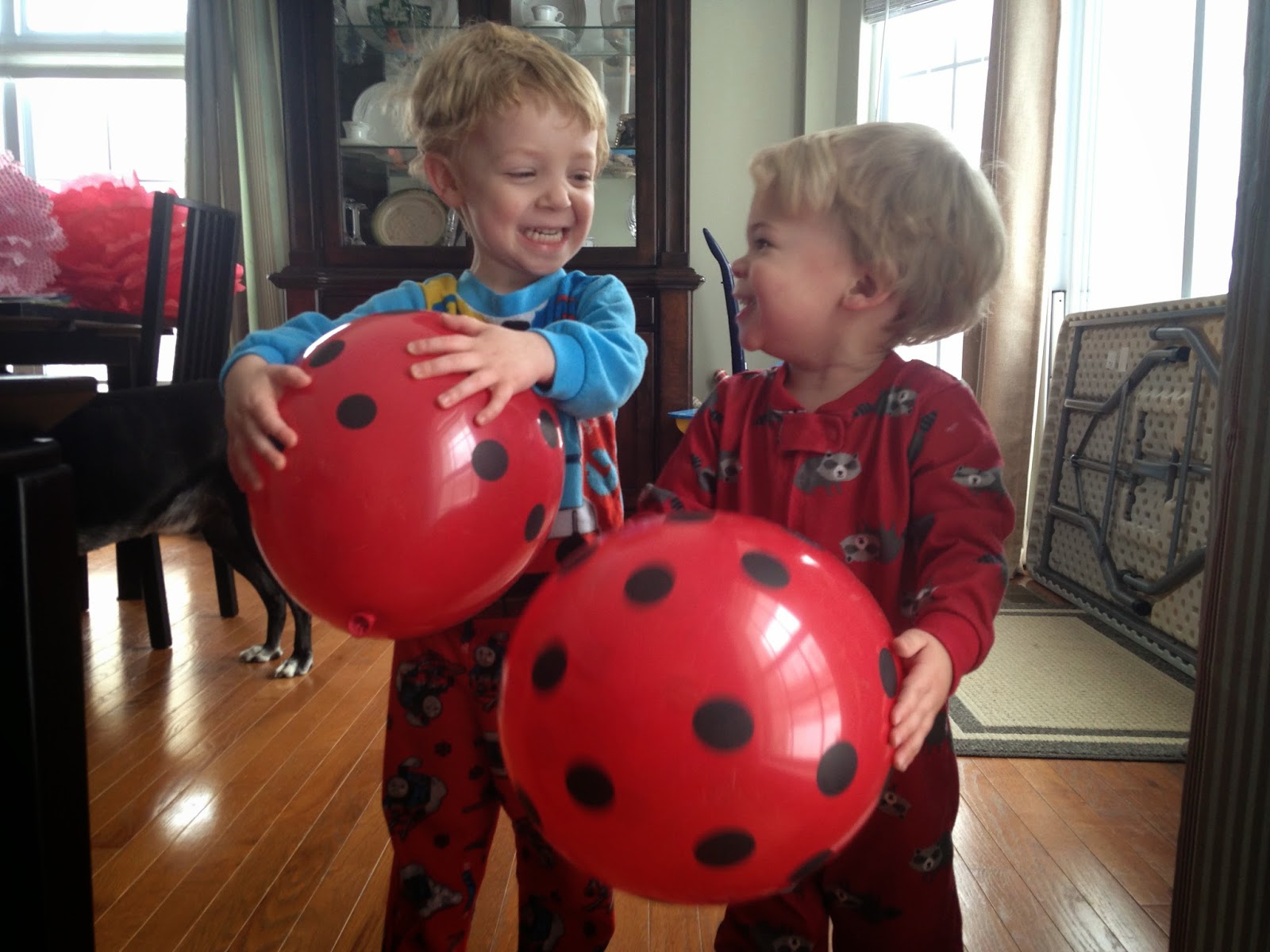 (Seriously.  Are these not the most adorable cousins you've ever seen?)

We got bundled up and ventured outside into the snow.  Liam was totally digging it, while our little Pacific Northwesterner was completely stoic for the first five minutes or so.  He was even less impressed after his cousin hit him in the face with a baby snowball.  Is it bad that I thought the snowball incident was hysterical?  I'm pretty sure Cara was horrified.  There were very few smiles from Cam during our time in the snow. 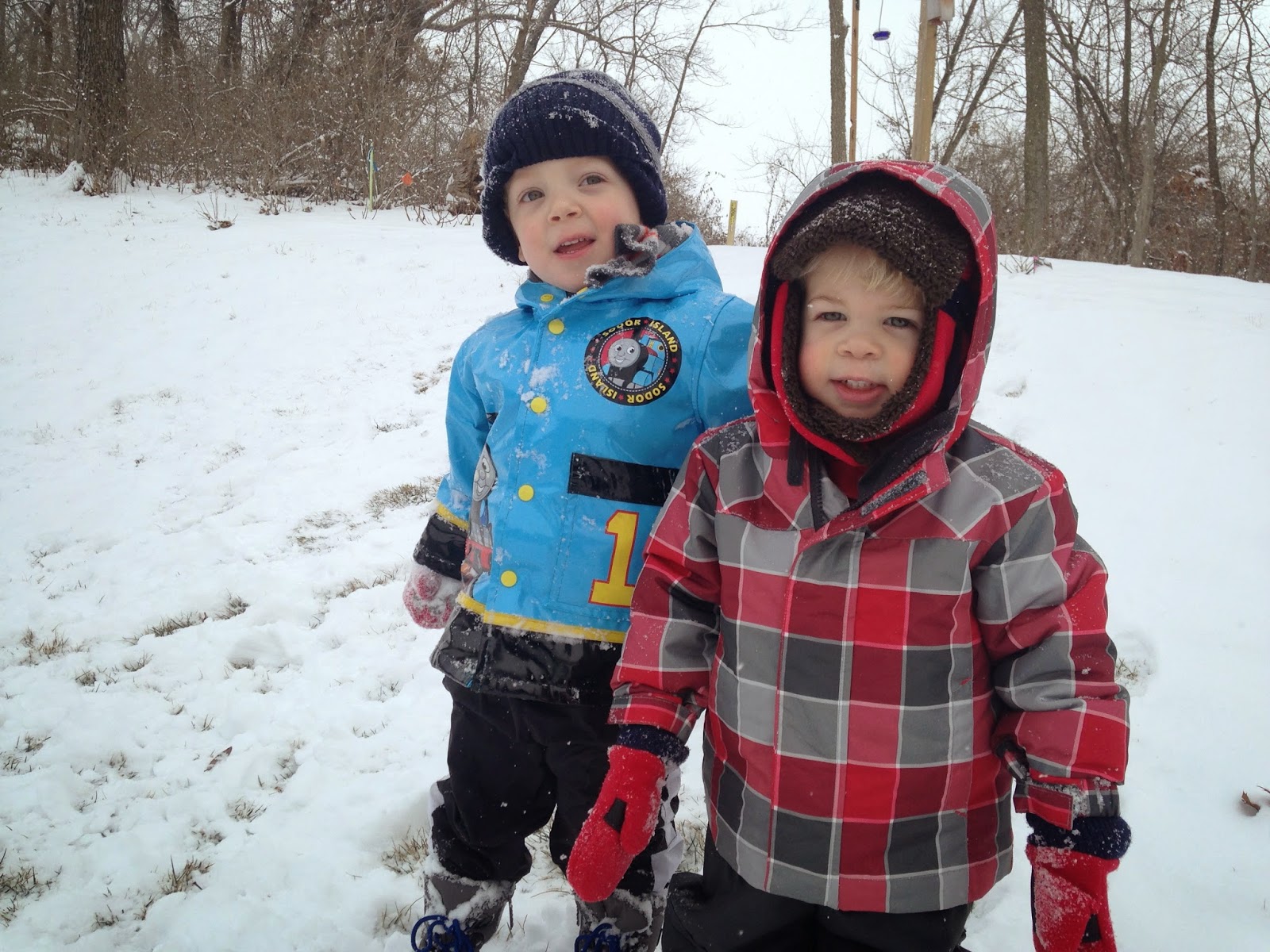 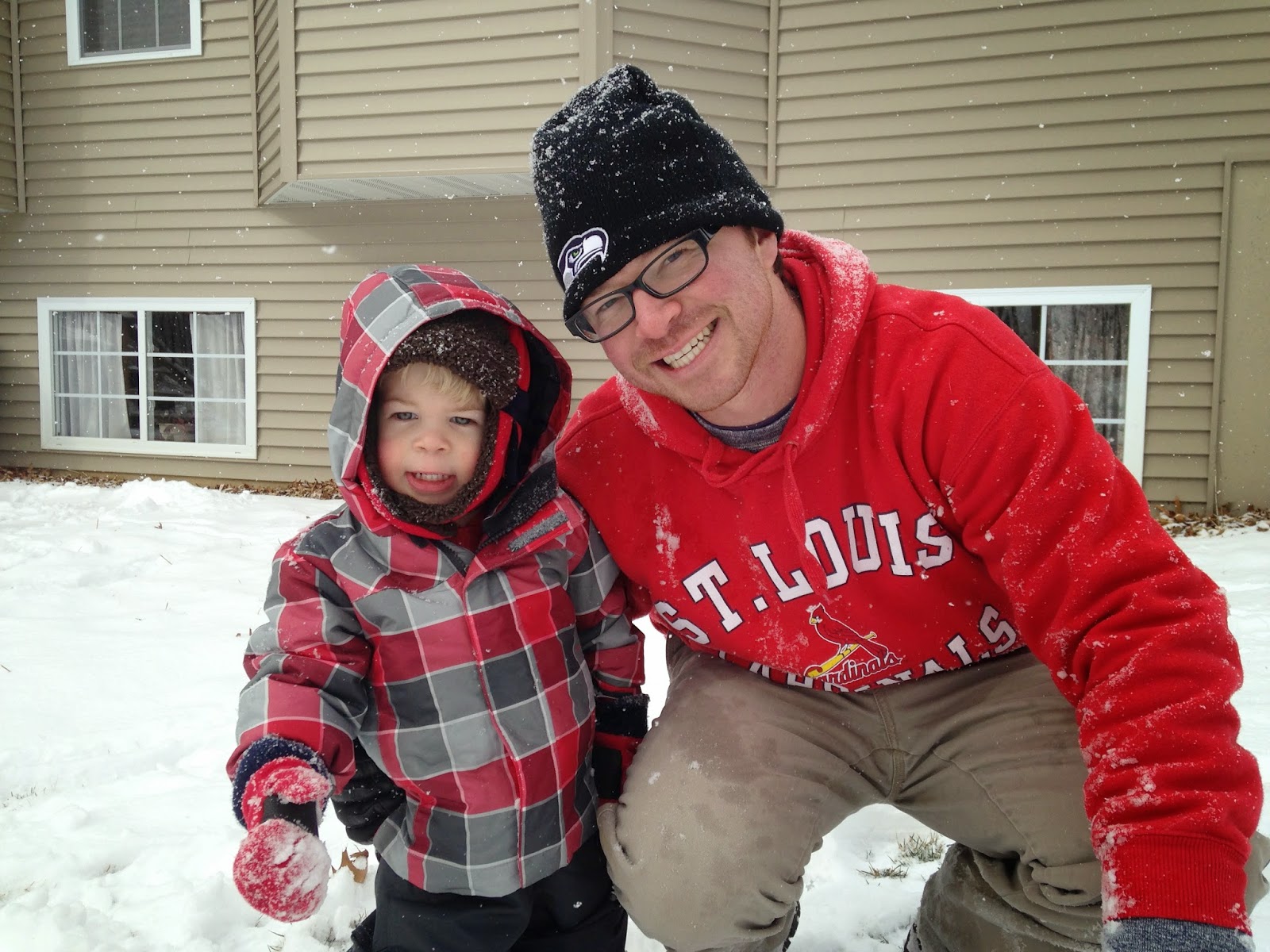 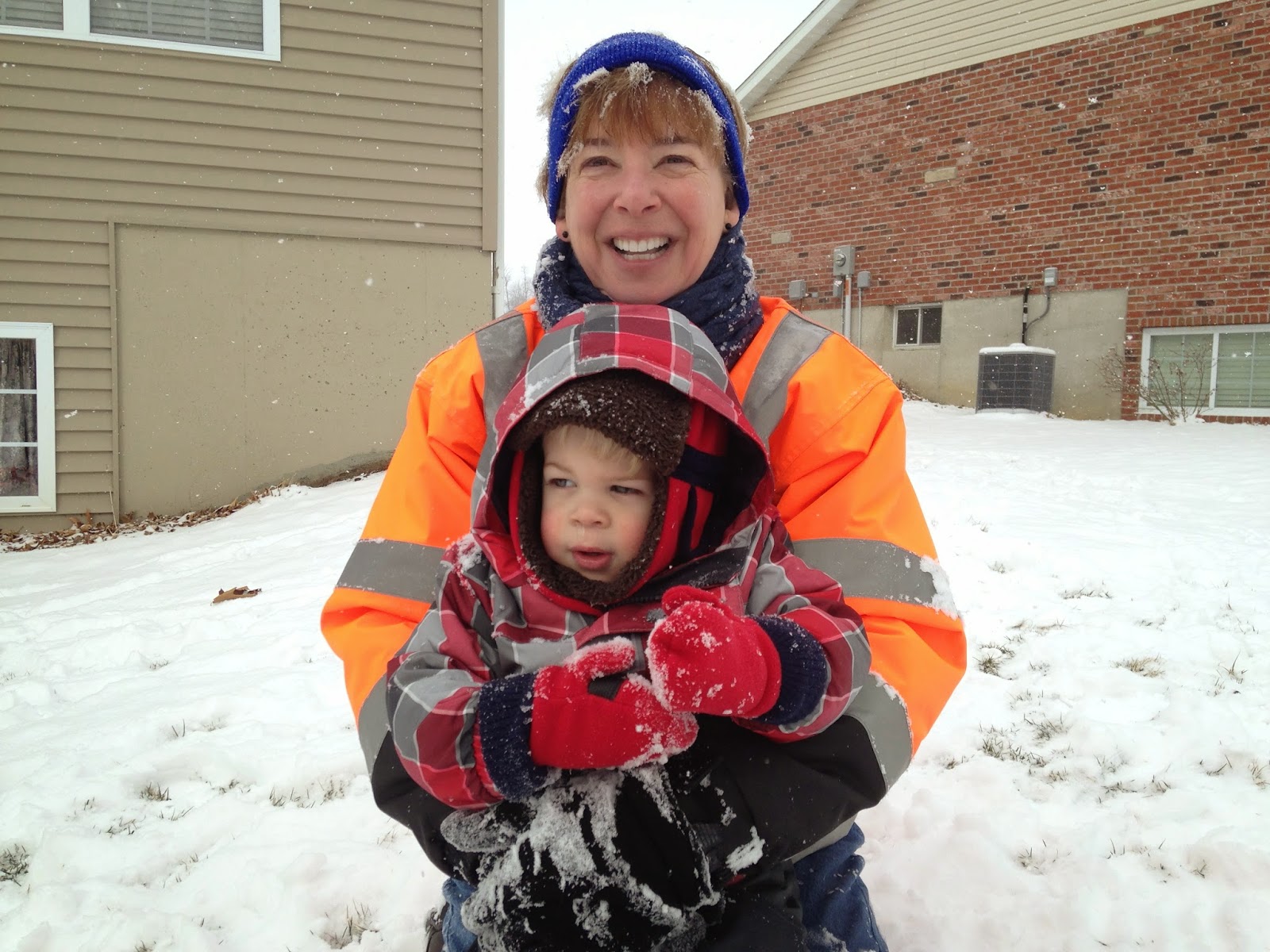 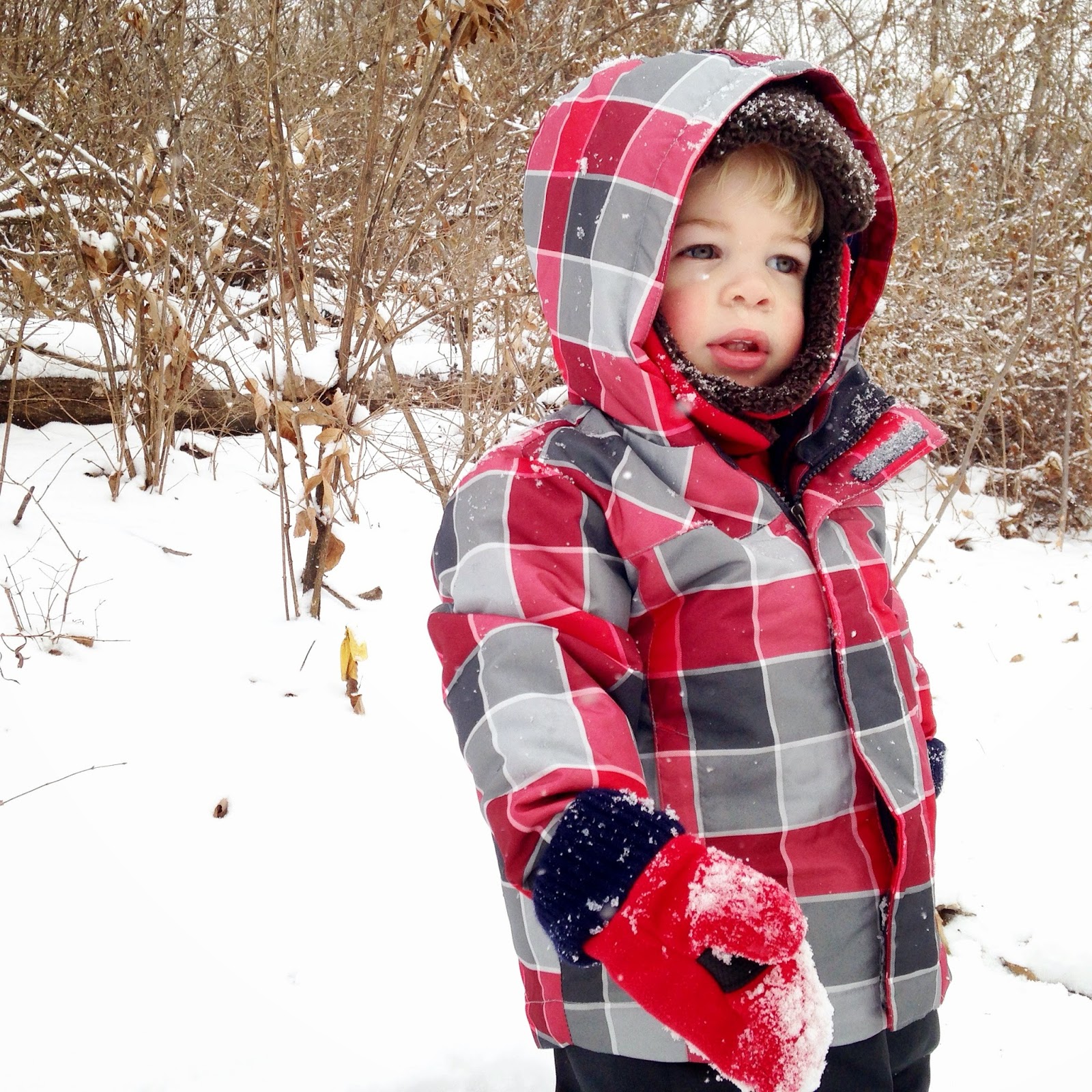 I wish I had asked someone to take a picture of me in my makeshift snow attire.  I packed light and didn't bring much in terms of warm clothes (I forgot socks for goodness sakes) so had on Ryan's romeo shoes/boots, yogi's under my pajama pants, Ryan's heavy dress jacket, and Cara's green (and floral) headband.  I looked absolutely ridiculous.

After about forty five minutes of play time, we all came inside to warm up.  Ryan's mom's parents live two doors down from Cara, so they came over to visit.  Much like with Midge, Cam wasn't interested in sitting still for a picture with them all by himself with his great-grandma and great-grandpa, so we improvised. 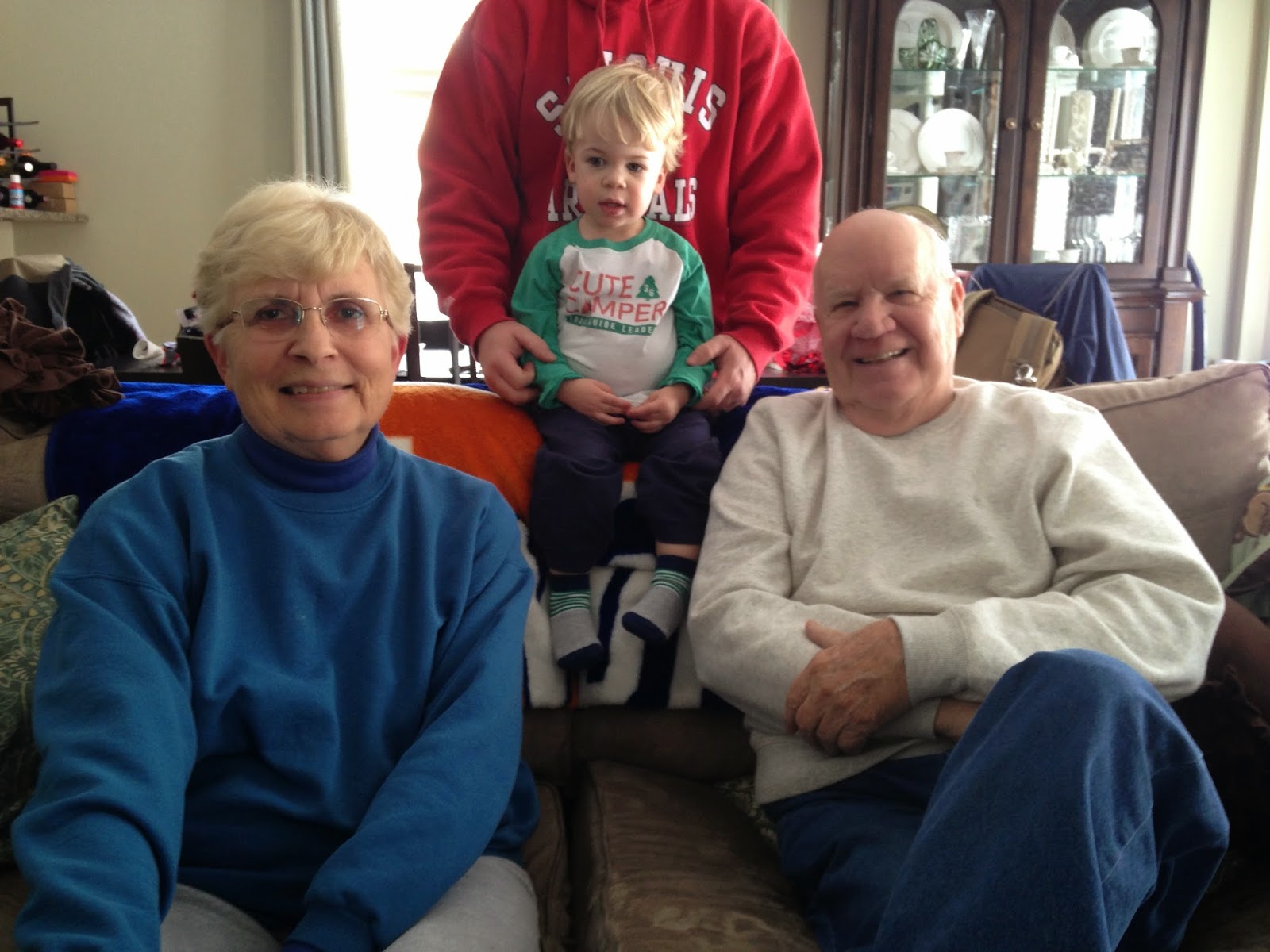 I was compulsively checking our flight status the entire day to watch for any delays or cancellations.  Thankfully, the people of the Midwest know how to handle snowy conditions and roads much better than the people of the Pacific Northwest.  We made it to the airport in plenty of time. 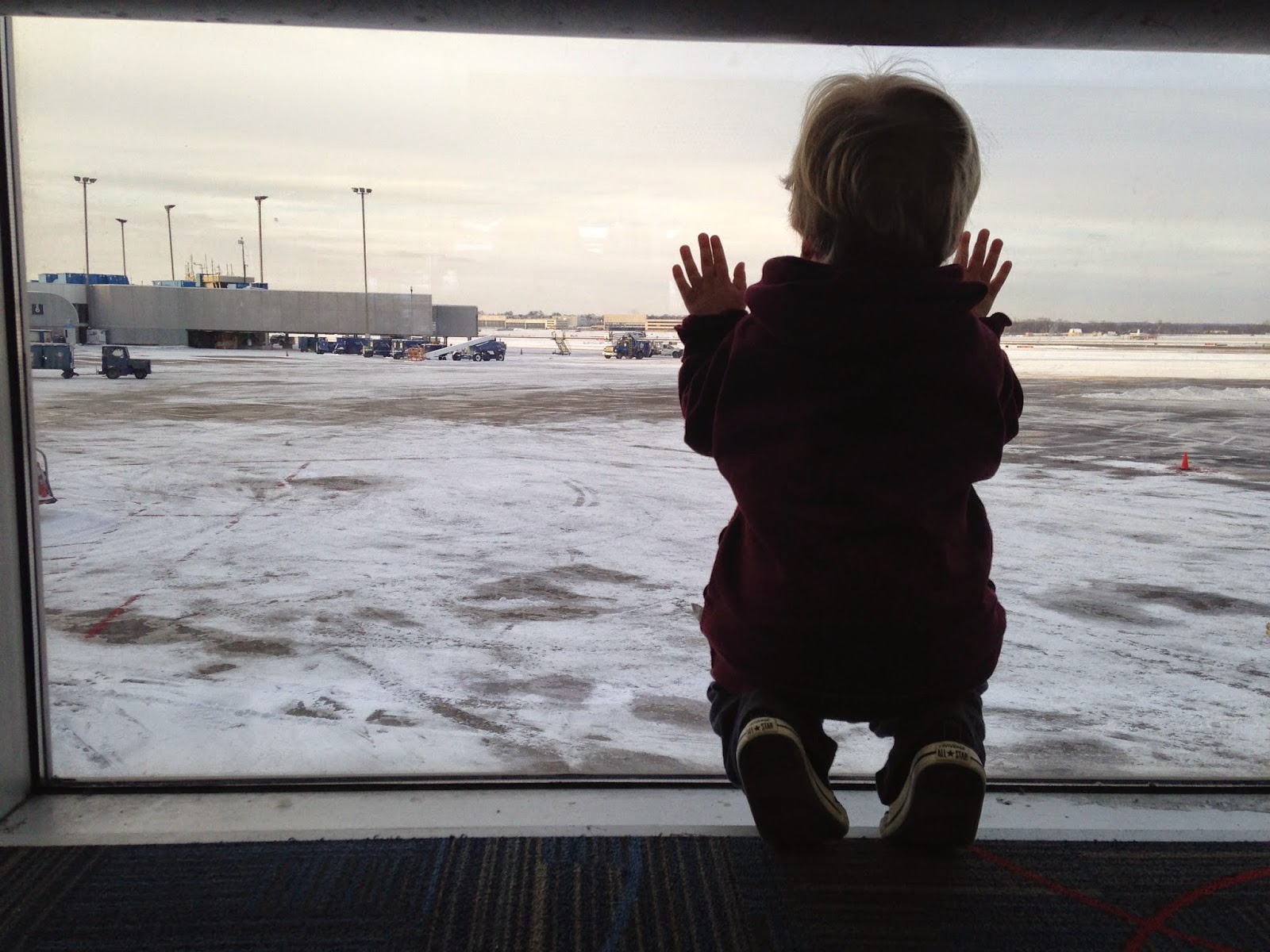 Thankfully, the flight home was (on time) and really smooth.  Camden was awake (and sat in his own seat!) for the first half of the flight, and then slept on me in the Ergo for the second half.  My back was killing me, but it was a small price to pay to have a sleeping (and quiet!) child for those two hours.

I can't say enough about how thankful I am to have been able to go back to SIU, where everything truly began, and spend time with Ryan's family.  We don't get to see them nearly as often as we'd like - so any time we do get to visit is very special.

As good as it was to spend time with them - we couldn't have been happier to be welcomed home by nearly-60 degree temperatures.