Yes, hello.  I am still alive, thank you.  Things have been busy, but what else is new?  Everyone is busy.

I'll just jump right in and tell you about how Southern Illinois University's Athletic Director called me one morning in November to tell me I had been selected to be inducted into the 2015 SIU Hall of Fame Class.

After I stopped sweating and reattached my lower jaw to my face (because it fell on the floor, duh) - I almost asked him if 1) he was sure he called the right person and if 2) he was just sure of this decision in general.

I have to say, that when I answered the phone, my first thought was that the head coach was looking at retirement and the Athletic Director was going to ask me to consider applying for the job.  Why this even crossed my mind (and in what universe they would call me to discuss) is laughable - but that was the "most likely" reason I could come up with.  Ha.

After 100 "thank you's," I composed myself enough to accept the invitation to attend the Hall of Fame induction ceremony and events that would take place on campus in Mid-February.

Looking back on my softball career at SIU, I suppose it was successful, but at the time, I was more concerned with working hard, winning games, leading my team, and making the most of my senior year.  The Hall of Fame and my career statistics were the farthest thing from my mind.  Now, almost seven years after my final at bat, thoughts of the Hall of Fame and my stats were in another galaxy.

February seemed like forever and ever away, but just like everything else - I blinked and it was time to fly. 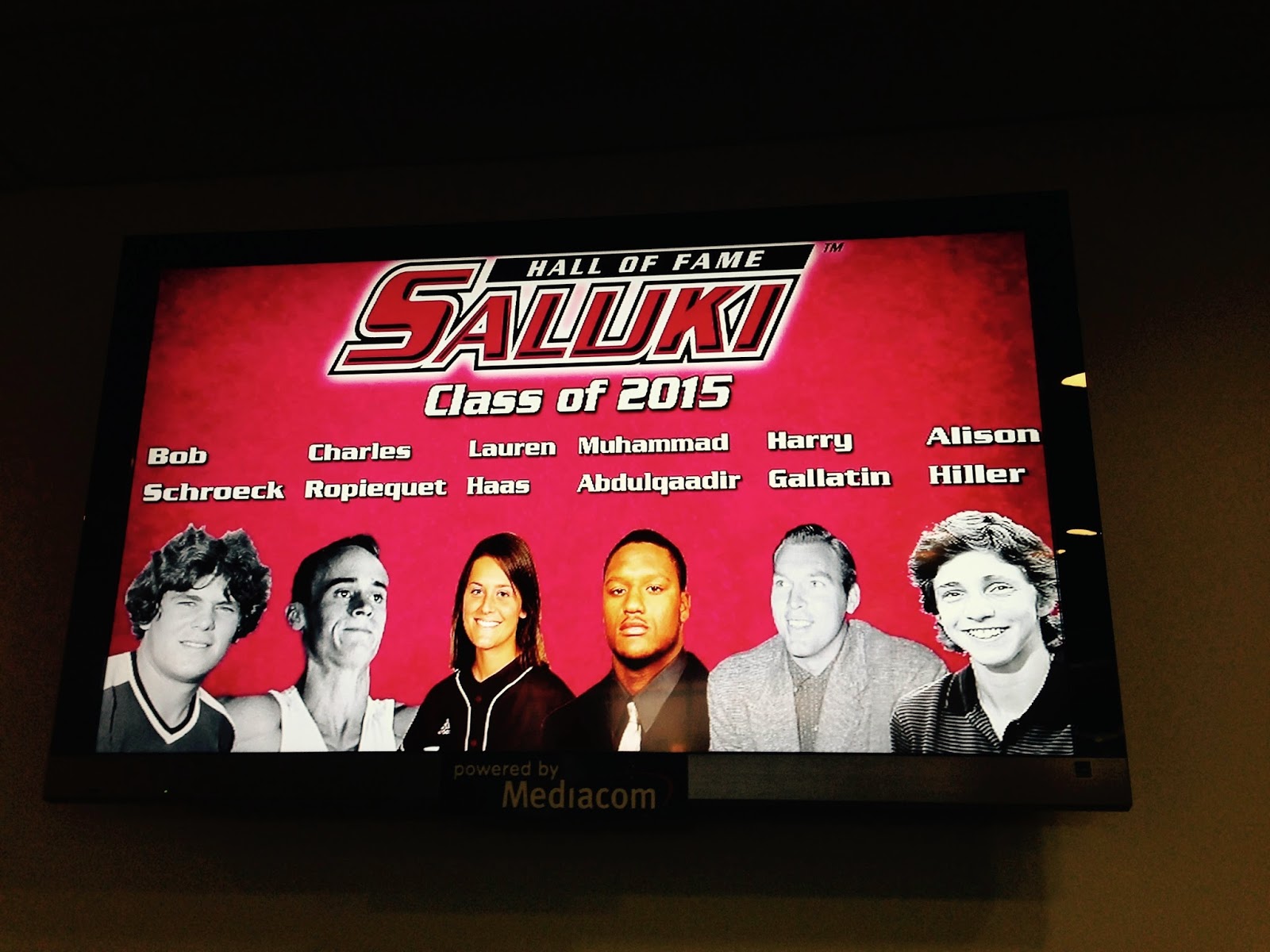 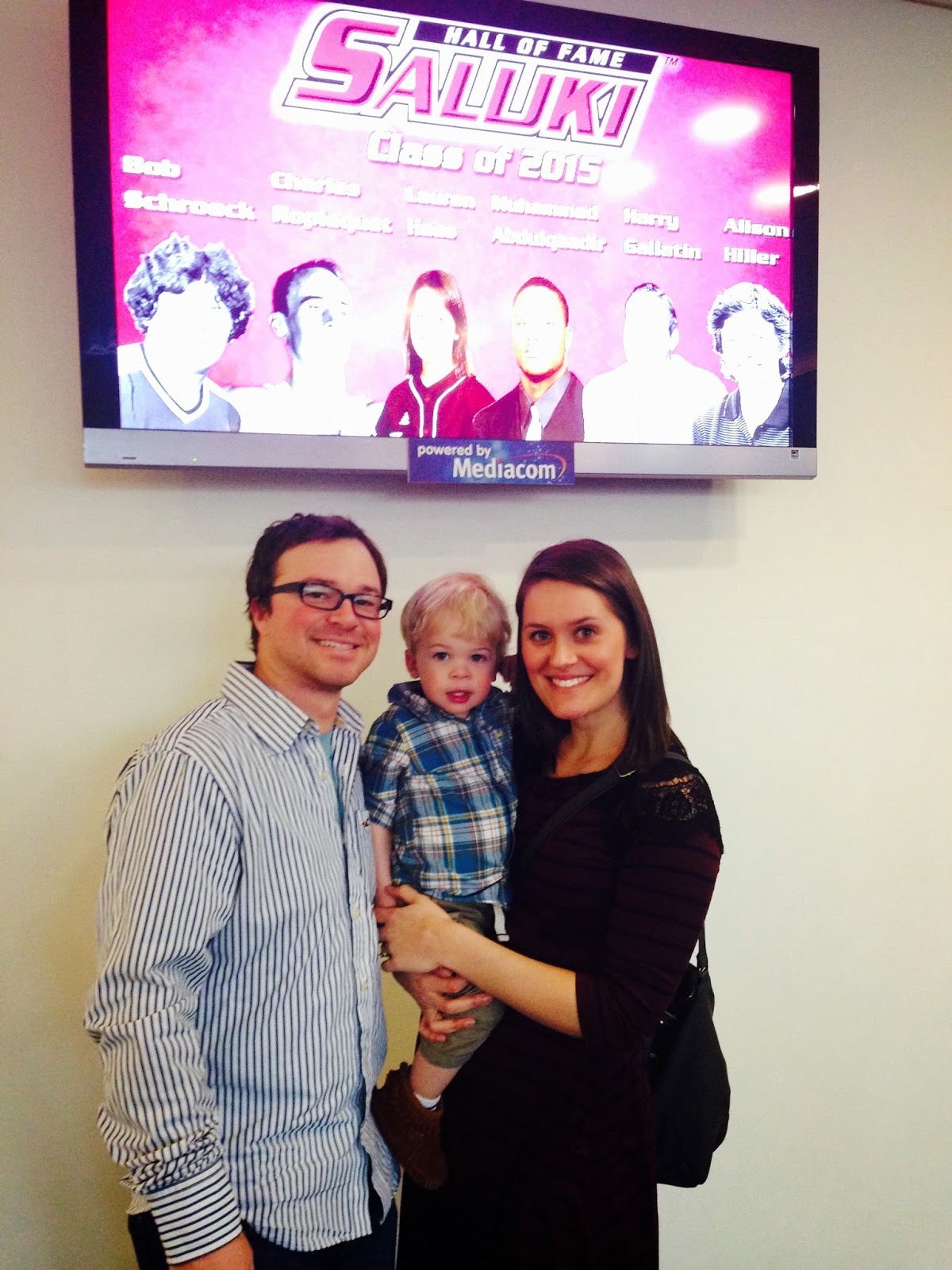 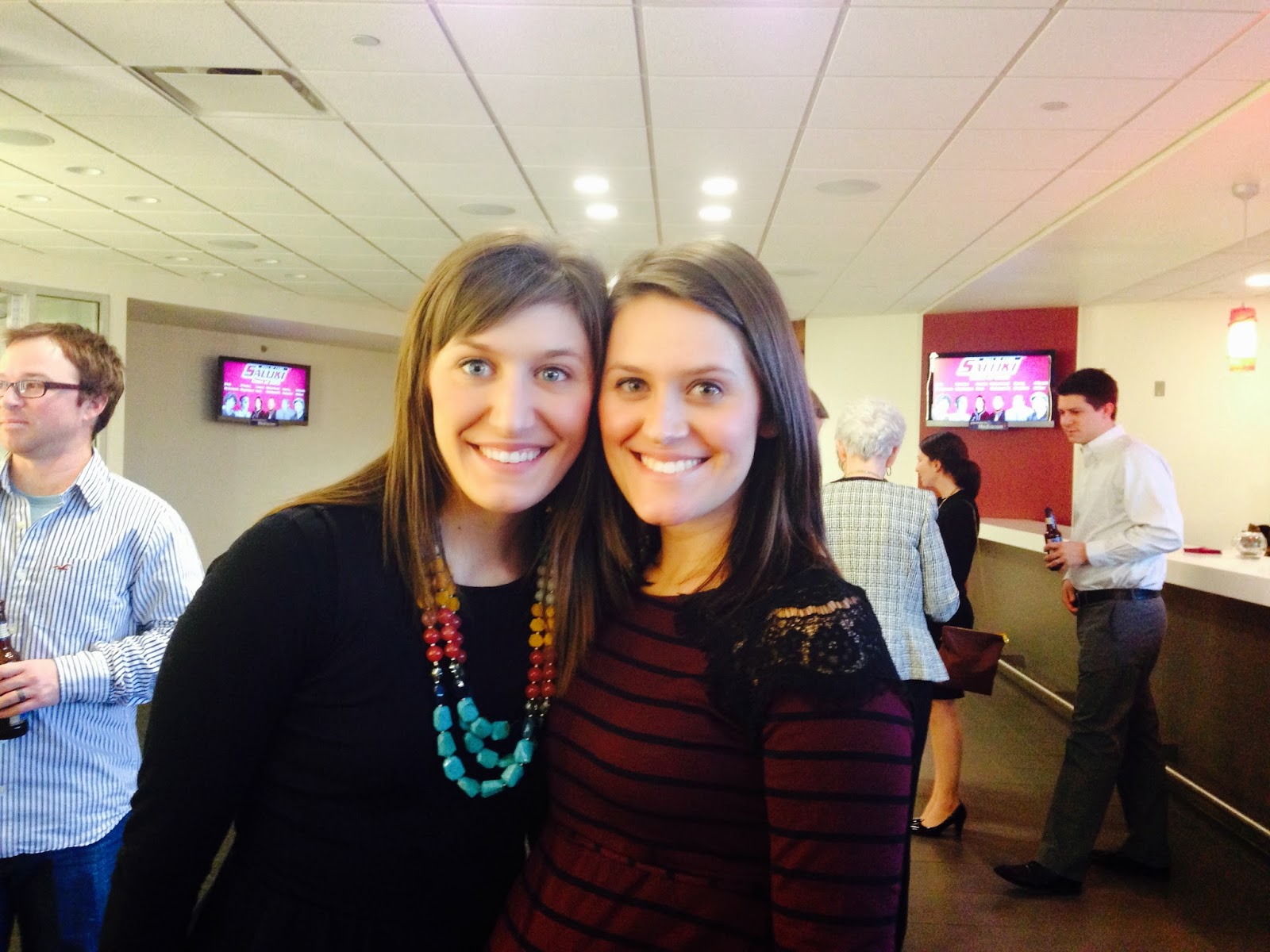 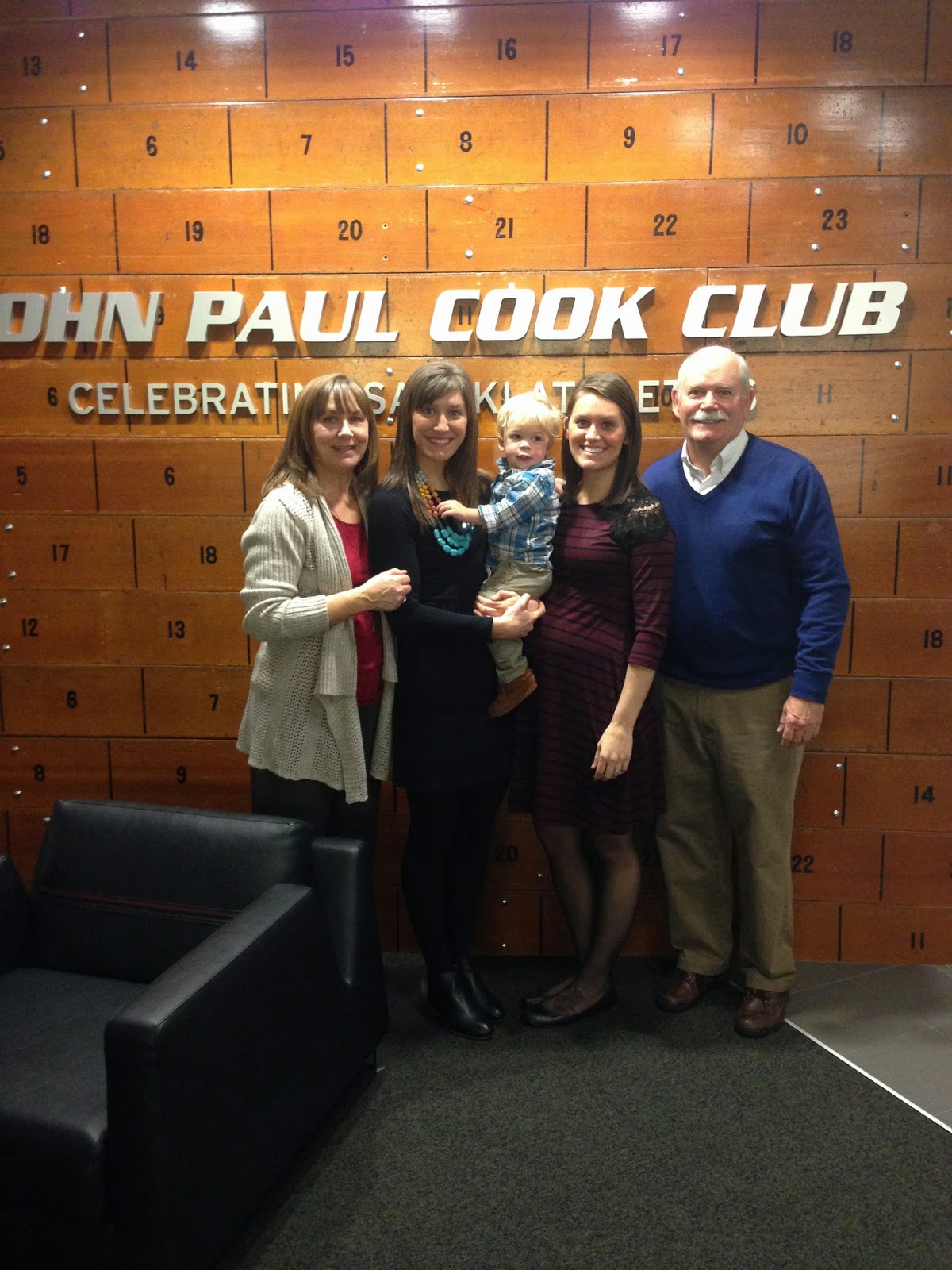 During the pre-dinner reception, I got to do a couple interviews with a few of the local news outlets, and while those were totally nerve-wracking, they also sort of prepared me for the three to five minute speech I was expected to give during the dinner.  I hadn't prepared a speech, but had kept a classy note in my phone of talking points I wanted to hit.  I speak a lot in front of people for work, so I wasn't too worried about it.  The difference was that when speaking for work - I'm not talking about myself.

I didn't know where to look and was fidgeting, and desperately trying to keep my voice from shaking.  The first thing I did was thank SIU for the honor, and congratulated the other inductees.  I can't really say for sure what I said after that because I'm pretty sure I blacked out.  Just kidding.  I know I talked about the support from my family, coaches, and teammates, and how my dad drove a serious work ethic into me, but I'm pretty confident I wrapped it up approximately 45 seconds after I opened my mouth.

Needless to say, I felt like a bumbling idiot as I sat my shaky ass back in my seat.  I missed half the talking points I had planned to hit on - most importantly that without SIU and SIU softball, there were people with me that night that wouldn't be there otherwise.  Ryan, Camden, and the baby girl kicking in my belly.  Looking back, maybe it's good that I missed that point because I probably would have lost what little composure remained and started crying.

After everyone was introduced and gave their speeches, our plaques were unveiled. 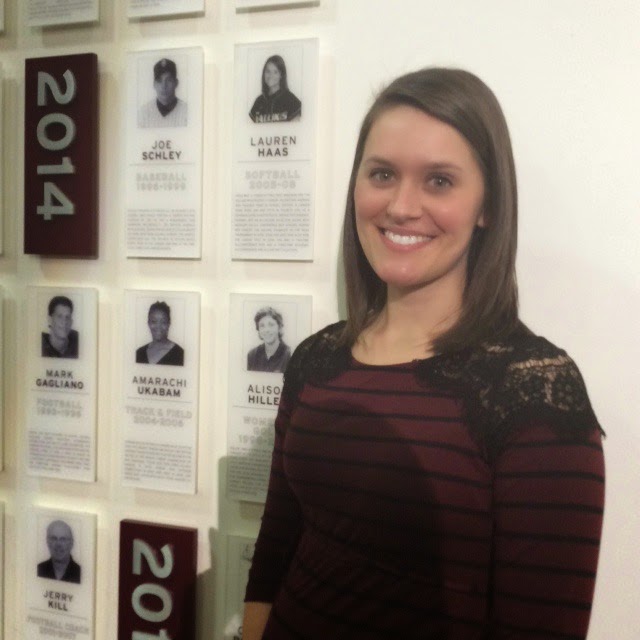 And the night was over.  Thank gaaahd.

Saturday, after a delicious lunch at Quatro's, it was time for the men's basketball game against Evansville, where the 2015 Hall of Fame class would be introduced at half time. 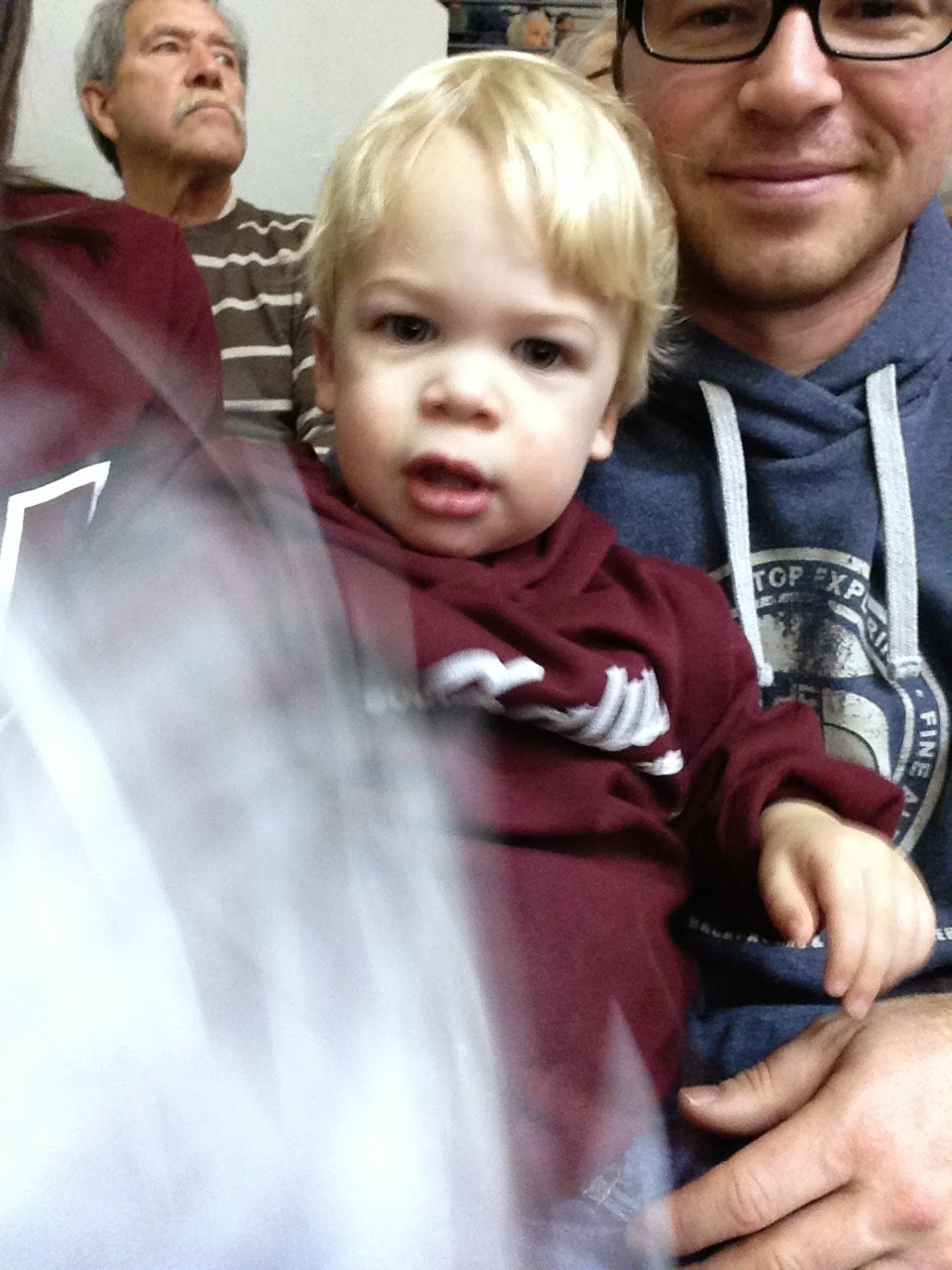 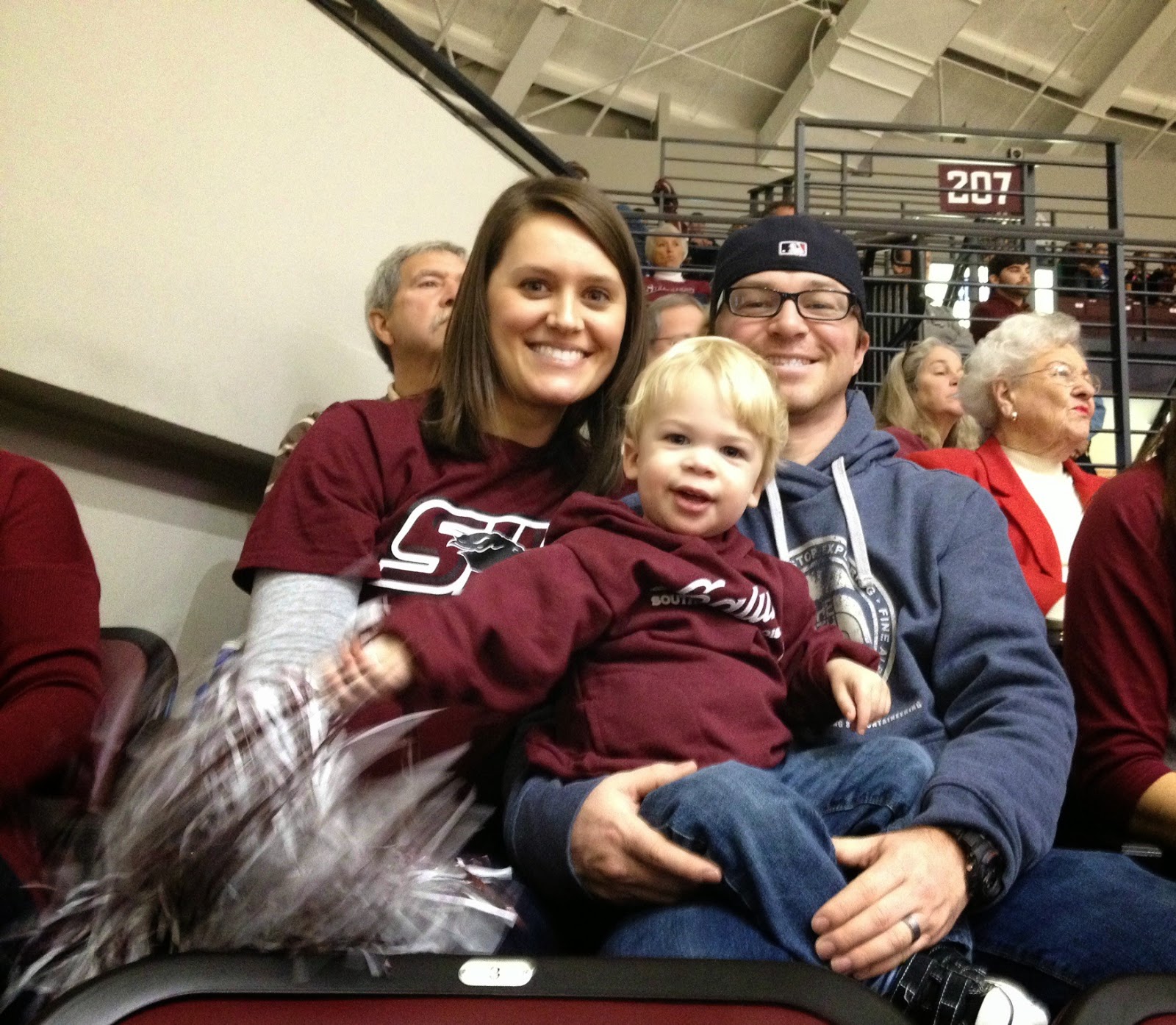 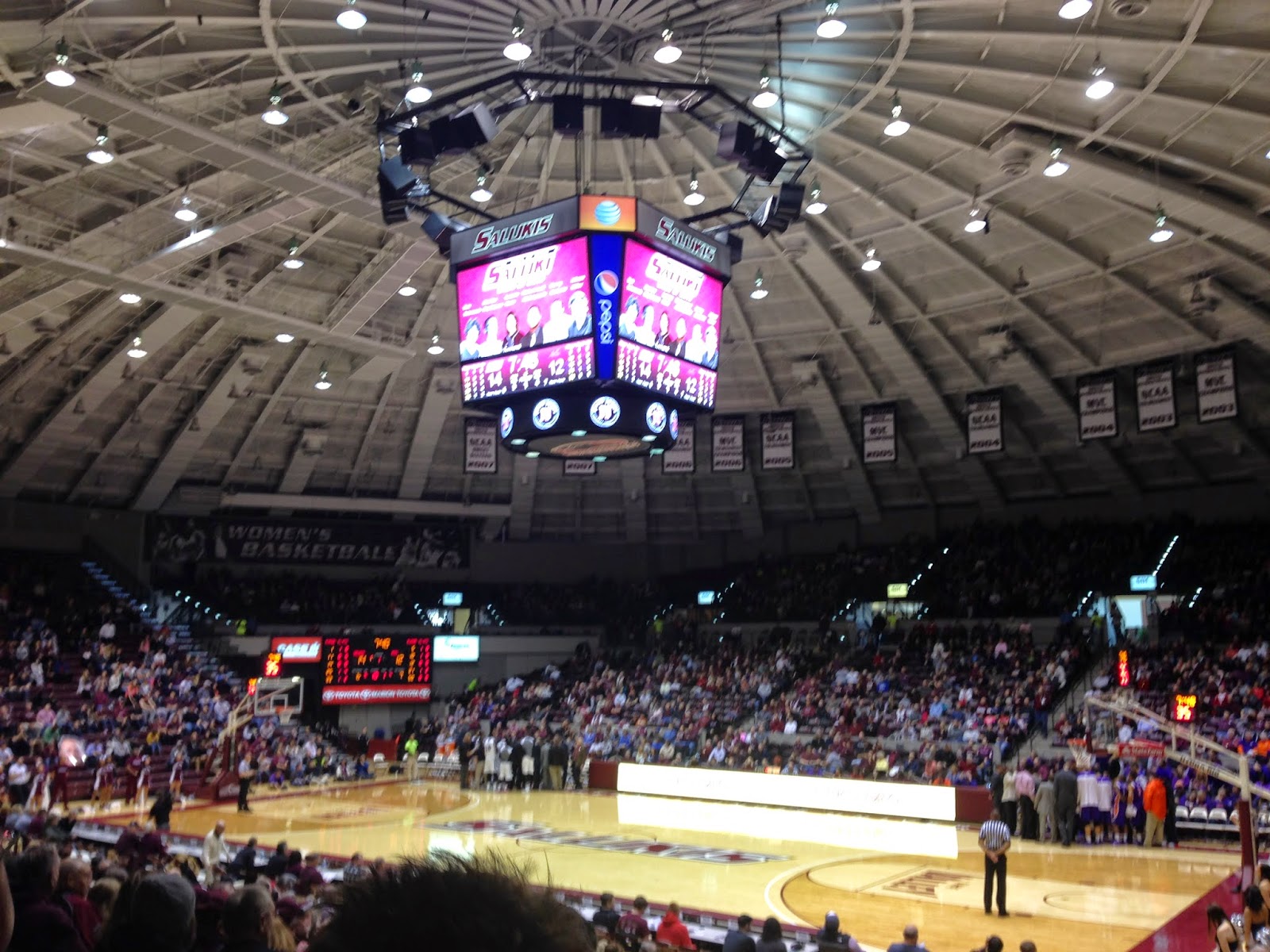 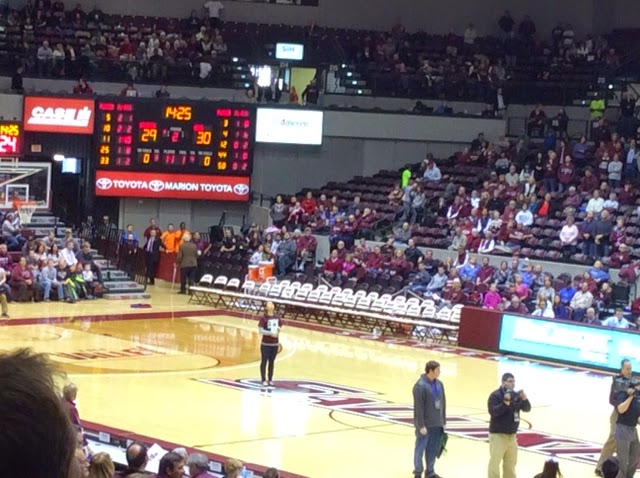 The whole experience was humbling, overwhelming, surreal, and a true (true!) honor.  My parents and little sister were able to make the trip and I am so glad they did because while it was my accomplishments that were being celebrated -- I would have not achieved those accomplishments without their guidance, love, and support.  And not only was my family on-hand to support me, but because we were in Southern Illinois, Ryan's family got to be there too.

I was feeling all the loves, for sure.

I'll be back with more on our long-weekend getaway to the effing freezing Midwest.

Email ThisBlogThis!Share to TwitterShare to FacebookShare to Pinterest
Labels: About Me, College, Softball, Travel