*I've wanted to use "cray-cray" for the longest time and now that I've said it, I can move on.  Thank you.

So, I knew going into Saturday that Ryan was going to have a surprise for me to kick off the baby shower day.  Up until Saturday morning I hadn't really thought much about what the surprise might be - other than jokingly asking him if he was going to dress up as a giant baby and pop out of a cake at the shower.

Rach, Momma, and I had planned on going for a morning walk to start off the day.  We knew we'd be eating lots of yummy shower food in the afternoon, so why not give our metabolism a jump start?

We walked two laps (with Brock and Sonny) and as soon as we were finishing the second lap - both Mom and Rachel stopped walking and were talking quietly.  They then said, "We have to go.  Ryan has a surprise for you and it's ready.  So, we have to go."

Obviously, I was quite confused and clueless so we walked to the car and I tried asking what the surprise was.  Of course they weren't going to tell me so I started asking for hints and clues.  My first question was, "Is this surprise going to make me cry?" and they assured me it would not.

Upon arriving back at home (luckily it's a 2 minute drive), Rachel told me that we needed to go in through the garage.  So, we did and I immediately saw a note that had been stuck to the garage door.  I started giggling/laughing like an idiot and Rachel started filming.

The note told me that "...in order to show me how excited he is for our coming addition, he's done something special for me with the help of my family.  Don't ask questions, just follow the clues..." and my first stop was the microwave.

After the microwave I am sent to the couch, the refrigerator, the bathroom, the remote control, and then finally to the nursery door where my final clue was waiting.  The final note told me to "... open the door to reveal a surprise for me shower..."

After the craziness calmed, they all said they were worried that I knew.  But I assured them that because of the scream and the tears - they should know that I was 100% clueless.  There was no way that I could have faked that reaction.

Becky, Mom, Dad, Rachel, and Ryan started telling me all the details of the plan.  It'd been in the works for two months, and many a fiblet had been told by all of them to pull this off.  Those rascals.  My brain hasn't been as sharp lately (I think I have some sort of pregnancy-induced ADD) so I'm going to cut myself a little slack for not picking up on something.

It never even crossed my mind that a person might be my surprise.  I honestly thought that Ryan and my godfather, Frank, had built us a rocking chair for the nursery.  That was the most logical thing that I could think of and even that was a little far-fetched.

Two hours passed before my heart slowed down and I really started believing that Becky, one of my very best friends and college roommate was standing in our house.  In our house!  All the way from St. Louis!  The whole time she was here I just couldn't believe that I was standing/sitting there talking to her face-to-face.

It seemed like almost everyone at the shower knew that Becky would be there and I loved being able to introduce her after being asked, "Where's your surprise?!"

Sunday we spent the day in Seattle - taking a ferry over, walking through Pike Place Market and Seattle Center, and having lunch at Red Robin. 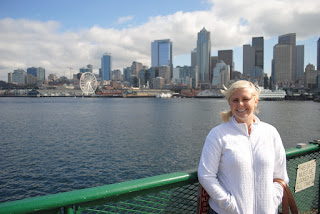 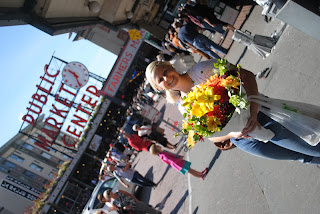 There was nothing that sounded better to us after that than to come home for dinner, and curl up to watch The Hunger Games.

Becky was flying out Monday afternoon so we went for a little scenic walk together in the morning, and then stopped for lunch at our favorite place/cafe - Panera Bread Co.  Panera was a staple in our college diet. 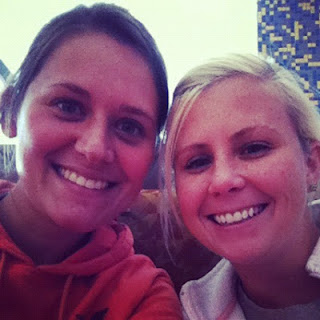 Did I mention that she packed and brought nearly all of the nursery wall decor that she made for the baby's room?  Yeah.

This was one of the greatest surprises ever and one that I most certainly will never, ever forget.  The amount of planning that she did and coordinating with my family and Ryan is seriously one of the nicest and most thoughtful things anyone has ever done.

She rocks.  I miss her already.

This is the full video that Rachel took while walking behind me during the scavenger hunt.  The video quality is really poor for some reason - but you can at least hear what is going on and see how things played out from my view.  Please ignore my moments of awkward and silly laughter.