I started writing this post last Monday, in hopes of sharing the highlights from our weekend.  Here we are, a week later and I've already forgotten what we did.  I even had to think (sort of) hard about what we just did this weekend.  Not good.  I'm telling you - mommy brain is a real thing.

Anyway, the highlight of last weekend was that we took Camden to meet the Easter Bunny. 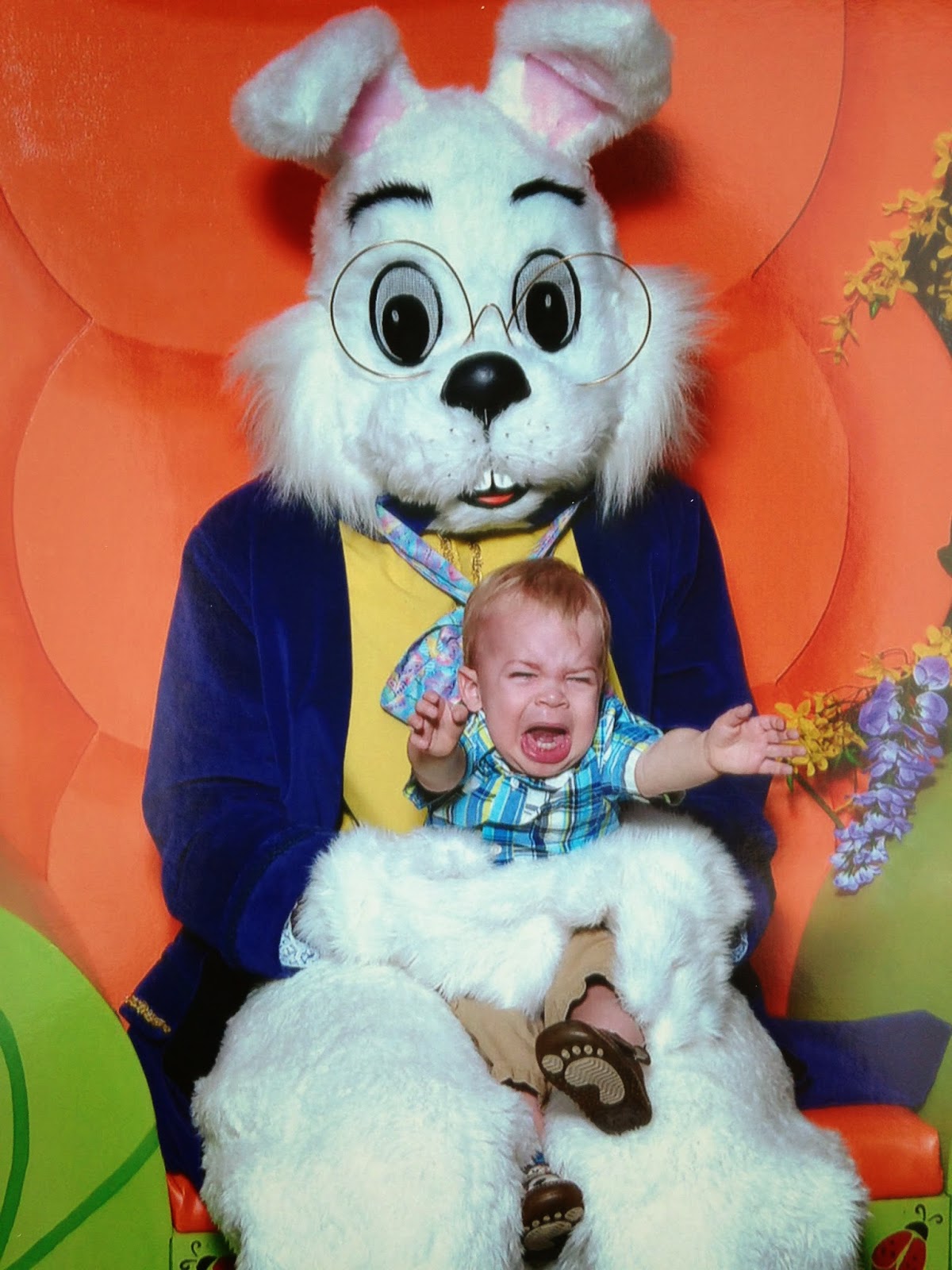 Overall, I'd say it went really well.  Why does the Easter Bunny have to be so creepy?

This weekend kicked off with a new session of shrimp swim lessons and a birthday party at an indoor play center where we continued to inflict torture on our child and make him go down the giant inflatable slide.  He was piiiiiiissed and pursed his lips in a very Derek Zoolander/Blue Steel fashion for the rest of the afternoon. 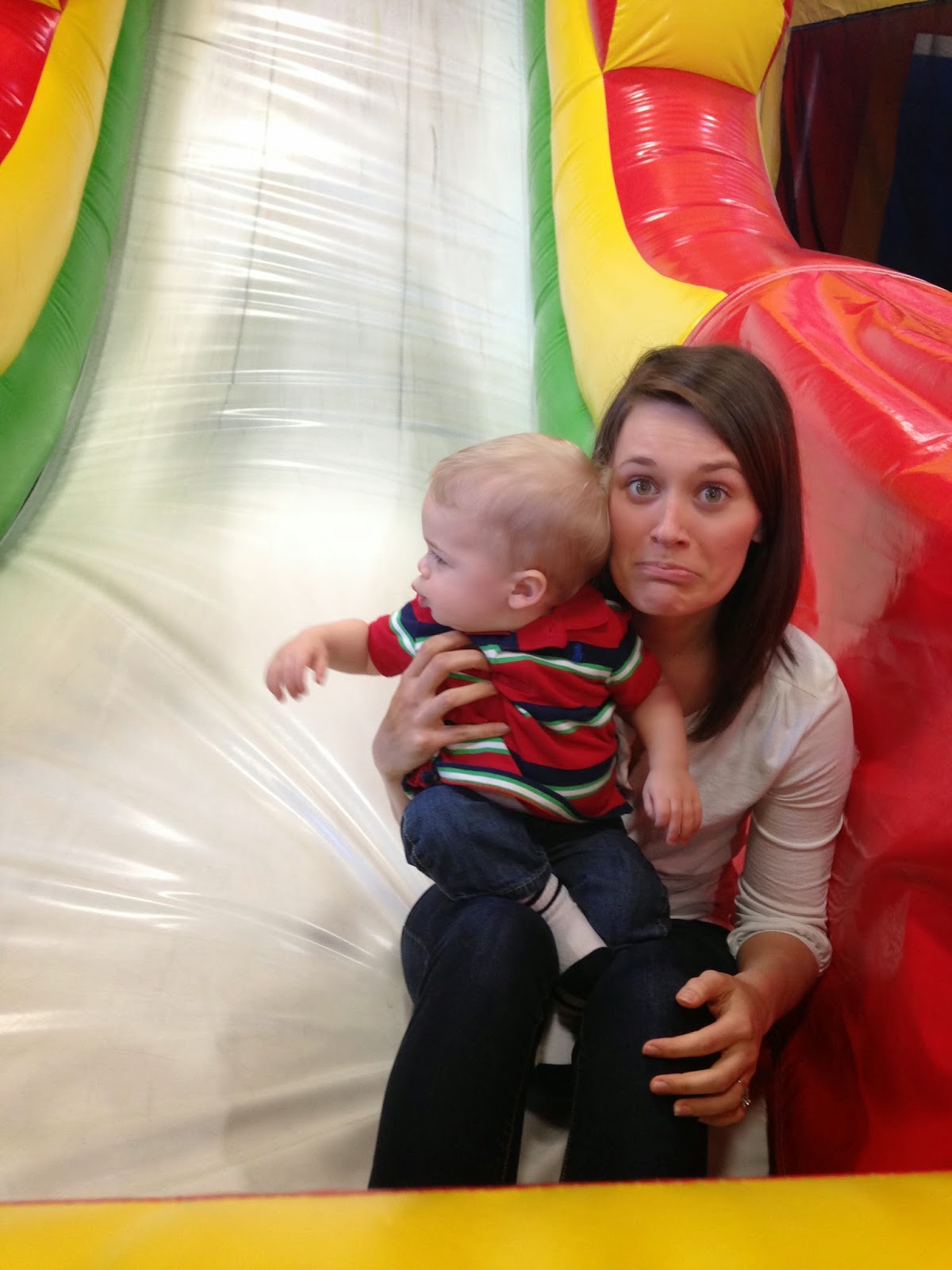 You can't tell, but seconds later he was screaming with a "why did you do that to me?!" look on his face.  I thought for sure he would like the inflatable farm area that was just for wee kiddos.  And I was wrong, wrong, wrong.  I'm not sure I've ever seen his face get so red or the veins in his neck and head pop in such a way.  That goodness we located the child-size shopping carts, because then all was well in his tiny world. 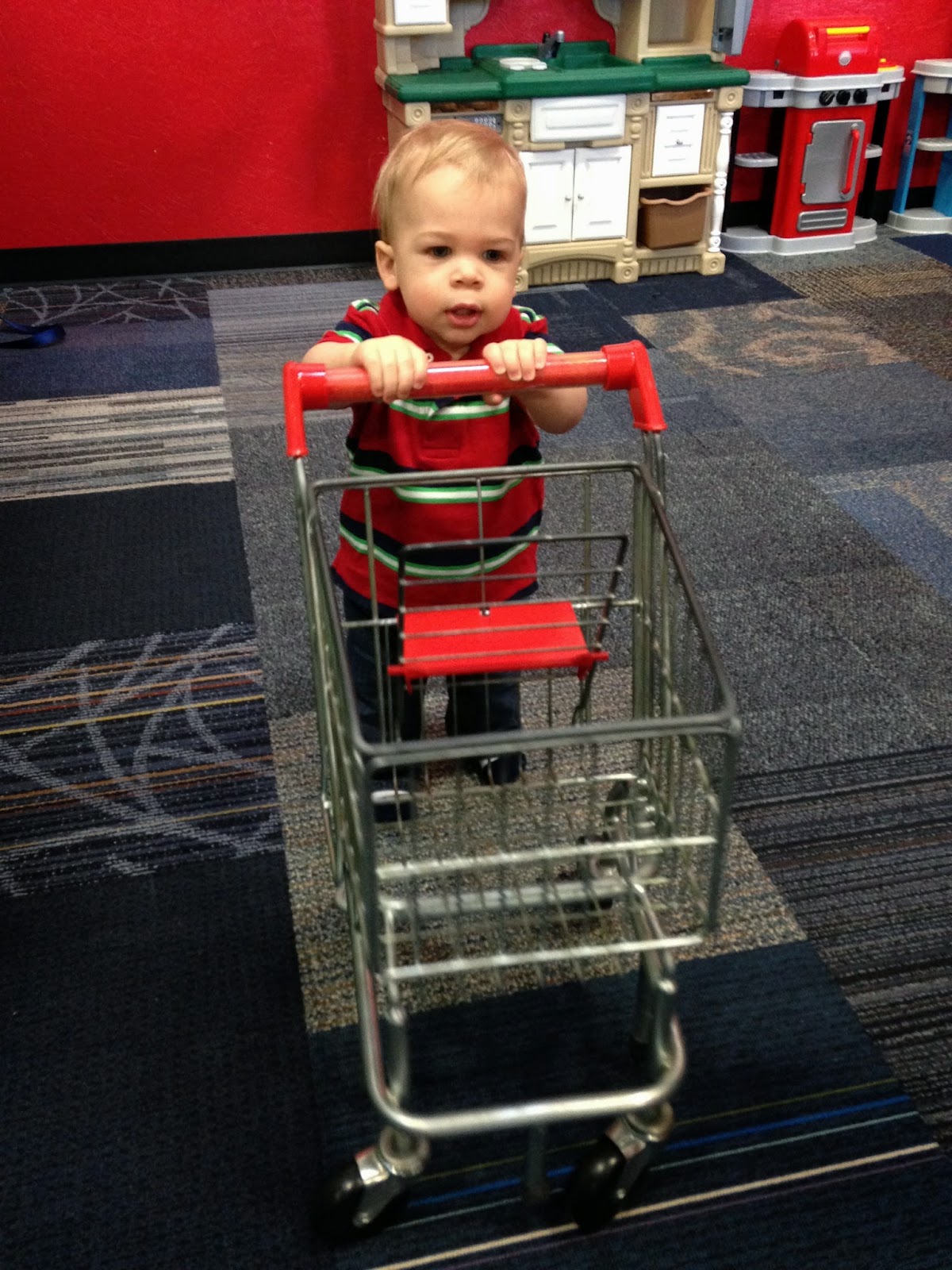 A particularly high point in the weekend was discovering a Boy Band station on Pandora.  My inner-14 year old self has been shamelessly singing along to Backstreet Boys, NSYNC, and 98 Degrees more than I should even begin to admit.

Sunday we ventured out on our first family hike.  Because I wasn't sure how Hammy would do being in the Ergo for a 5-mile hike, I wanted to stay close to home.  Thankfully, he did great and found it hysterical to yank my ponytail the. entire. way. down. 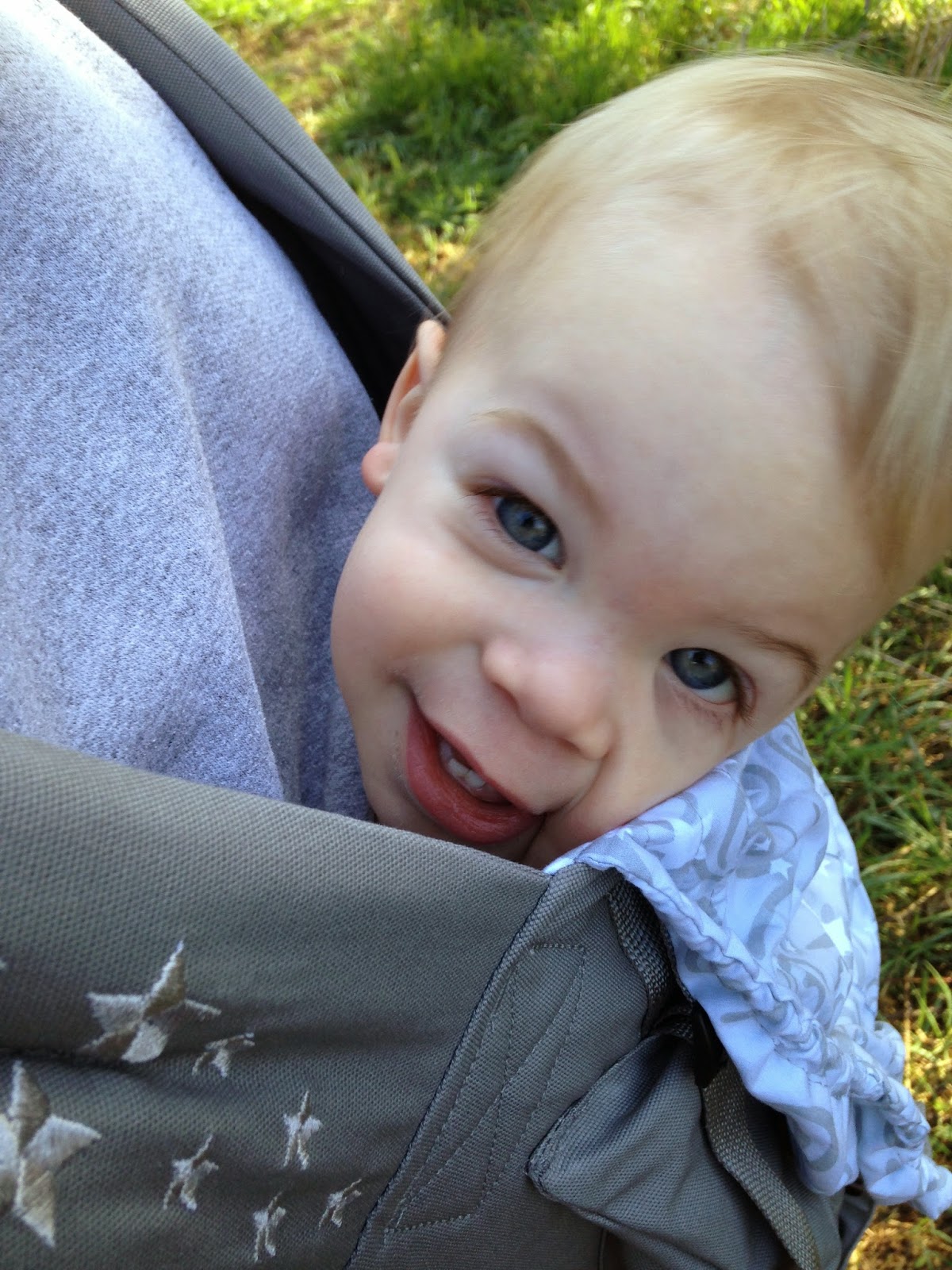 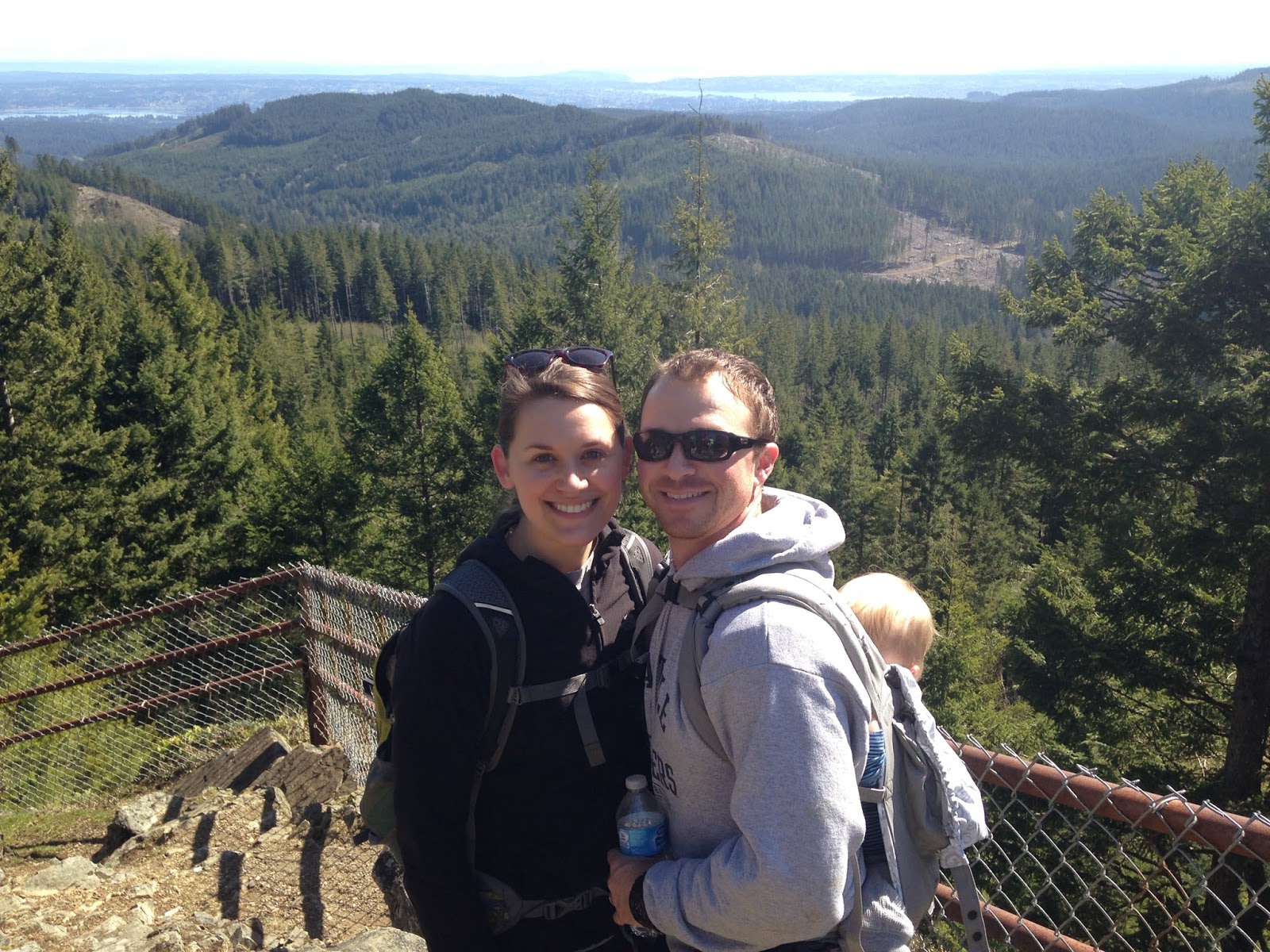 After our hike we rewarded ourselves with Panera - lots of Panera, complete with Frozen Caramel "smoothies."  Do we live it up or what?

Totally blog worthy news - Camden fell in the backyard and got his first legitimate knee scrape.  He hardly noticed but for some reason I took it a little hard.

The weekend ended on a high note and we were literally cheering at the television when watching the latest Game of Thrones episode.  Two words.  Purple Wedding.

Hope you all had a great weekend.

Take Luck,
LP
Posted by Lauren Peters Blog at 9:30 AM

Email ThisBlogThis!Share to TwitterShare to FacebookShare to Pinterest
Labels: Adventures, Lately, Television, Where we live