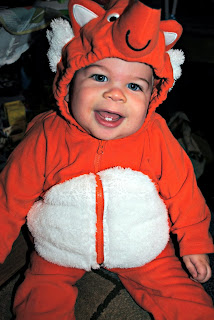 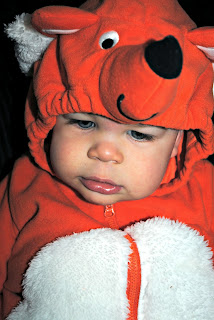 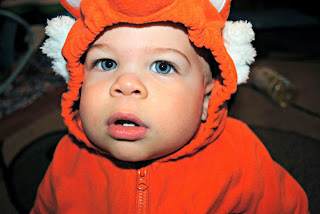 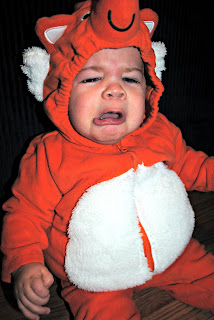 As you can see - he became increasingly displeased with his costume.  Poor buddy.

Besides it being Camden's first Halloween, this year, October 31st just feels different.  At this time last year, I was 33 weeks pregnant and in preterm labor.

Obviously, we all know that the doctors were able to keep Camden cooking for six more weeks and all was well.  What you don't know is that October 31st changed everything for Ryan and me.

I will never know for sure, but I think that the combination of working way too many hours and consecutive days at work (and being mentally and physically exhausted as a result), the stress/fear of being a new dad, and the stress/fear caused by all the preterm labor drama, caused Ryan to snap.

He fell into a deep and seemingly endless pool of anxiety and depression that he could not shake.  I think the only person that really understood how Ryan felt was his mom, and seriously - thank goodness for her.

We took life day-by-day and hoped that his anxiousness and feelings of uncertainty would pass when Camden was born - when he knew that both Camden and I were fine and healthy, but they didn't.  I can't tell you how overwhelming and horrible it was to be overjoyed at the sight of my new son, only to know that my husband was completely terrified.  I think at times I blamed myself, thinking that if we had never gotten pregnant, this would have never happened.  Then of course, I'd look at Camden and know that one day, Ryan and I would collectively agree that he was our greatest achievement.

Long story short, it's been a really long road to today.  I think it took just over six months for Ryan to get back to feeling like himself and comfortable in his skin.  Of all the horrible things that happened as a result of my preterm labor, I know that it made our relationship and marriage stronger, and forced us to rely on each other more than we ever thought we'd have to.  For that, I'm grateful, and know that because we made it through that storm, we can make it through anything.

This past year I've debated and wondered if I should write about that experience.  I'm not one of those that strictly writes about the bedazzled unicorns and rainbows of our life, and I'm always very honest, but something inside just kept me from it.

I (sort of) joke with Ryan now and tell him that we need to have another baby just so we can experience the late-pregnancy and newborn stage again.  This whole experience robbed us of a time that was supposed to be happy and exciting.  And I want it back, dammit.