You know what this little space has been missing the last eight months? 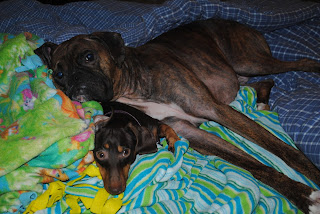 You know, the ones that had to realize that they are dogs and not actually humans.  I'll wait while you gasp at the realization, too.

I was never worried about how they would be around a baby because they (Brock especially) love kids.  Brock is a gentle giant that really just wants to lick/slobber people to death.  Sonny just wants to be cuddled and snuggled.  And she just might pee on you a little bit from the excitement.

My concern was how they would do not being the center of our home life.  Would they be jealous?  Act out and misbehave?

At first, there was a lot of curiosity, lots of sniffing.  Lots of looks at us like, "Who is this small person and when the hell is he leaving?"  We sensed some jealousy - mostly from Sonny.  Thankfully, the jealousy quickly passed and no serious misbehaving has gone on.

In the last couple months, Camden has really started to notice both pups.

He climbs all over Brock (which you know that puppy loves) and tries to grab Sonny's snout and tail anytime he can.  I always try to sit closely when he's trying to play with her, just in case I need to run interference.  Her ears are always down/back, but because she is a small dog - I know she may be more likely to nip at him if he tugged too hard.  Or if she had just plain old had enough of him.  So far, she seems to just love the attention.

Brock, who's always been our protector, has taken on protecting Camden without missing a step. He's like his giant, four-legged shadow.  Some nights we've been unable to find Brock, only to find that he's snuck into Camden's room and is laying next to the crib.  Protecting him while he sleeps.  Or so I like to think. 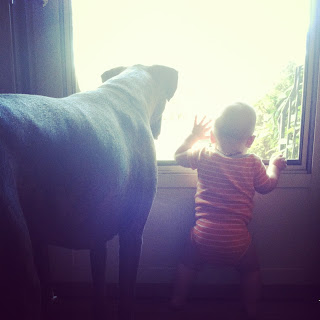 It is going to be so fun to watch these three grow up together.