While out and about today, I had several people ask me how old Camden was.  And with each reply, I said that he was, "Eight months today," as if to emphasize that he is newly eight months old.  Not to be confused with a seasoned eight month old.  Obviously, I have issues. 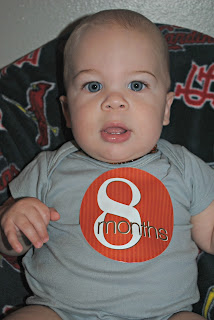 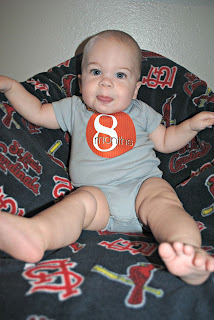 This child will not sit still.

Mr. Chub Chub weighed 17 pounds 8 ounces at his double-ear infection recheck last week, to land him in the whopping 11th percentile.  It's funny to me because I think he's getting so big.  But really, he's just a wittle guy.  Seriously, seeing him in shorts requires a double take and you have to ask yourself if he's wearing shorts or pants.

I swear that I fall in love with this little boy more every single day.  Maybe that's why I'm having all these issues with him getting so big and "grown up."  I'm going to be a basket case when Camden turns one, and may require an alcoholic beverage or two.  Or six.

This boy is a crawling machine, continues to pull up on anything and everything, and has started to walk himself along the couch and coffee table.  My guess is he'll be walking by 10 months, if not sooner.  He loves (trying) to play with cords of all sorts, the Xbox console, and the volume knob of the stereo system.  At the moment, his new favorite toy is an empty water jug. 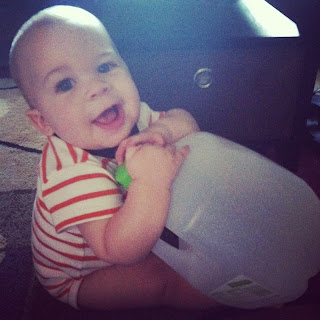 He has totally embraced baby food and loves pears, apples, bananas, carrots, sweet potatoes, peas (as long as they are mixed with something sweet), and any fruit & grain concoction from Earth's Best Organic.  While I was pregnant, I was totally sure I'd be making his baby food.  Let me tell ya - that ship sailed long before I even attempted to throw that in the mix and we love Earth's Best.

Camden loves splashing around in his baby pool and during his weekly bath.  We signed him up for "Shrimp" swim lessons that start at the end of the month, so we'll see how he feels about splashing in a big pool.

This little bald boy seems to be sprouting a few more hairs on the top of his head - but not much.  He's now rocking one half of a hillbilly tooth on the top, but three more are a mere minutes from showing their faces.

He is completely ignoring me when I tell him to slow down. But I guess that's just practice for the rest of his life.

Cam Cam, I certainly remember our life before you, but now - I can't imagine our life without you.