Seeing as our trip back to St. Louis was over a month ago - I guess it's about time I recap.

I already talked about how well Camden did on the flights, so I'll get right into the trip itself.

We stayed at Ryan's sister's house since their place is already baby proof and has oodles of baby stuff at the ready.  No joke, Liam has more toys than any child I've ever seen.  Cara was bringing out Camden's age-appropriate toys left and right.

I was so excited for us to see Cara, Webb & Liam.  When we got to their house and Cara opened the door, I'm pretty sure (OK, I'm positive) that our excitement freaked Camden out.  He immediately clung to me and started to cry.  Complete with a lip quiver.  There was actually a lot of the clinging and lip quivering during the trip.  I think the little man got a little "over stimulated" at times.

We got lots of quality time with our favorite people.  Liam was a little unsure of his little cousin.  Well, I should say that Liam was OK with Camden (after a short warm-up period), as long as he wasn't playing with his toys or stealing Grandma and/or Mommy's attention. 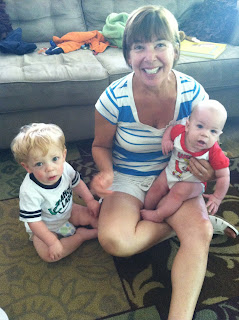 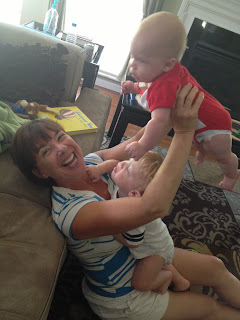 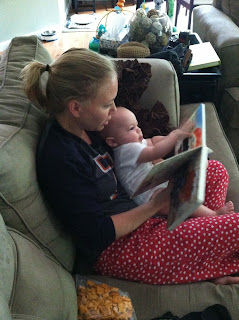 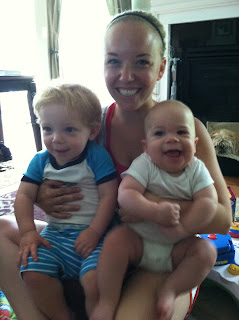 One thing I love about going back to the Midwest is that I almost always get to meet up with some girlfriends from college that still live in the area.  This visit was a little more special because I had one little man in tow.  Camden got to meet his Aunt Becky, Alex and his new friend Patrick, and Schmitty. 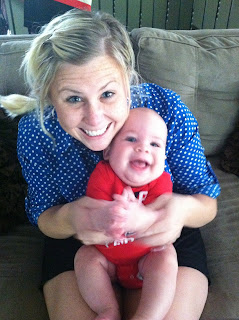 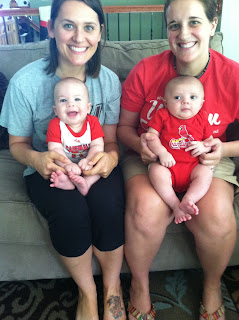 We took the trip to attend the wedding of Ryan's cousin Jeremy and (his now wife!), Ashley.

The rehearsal and rehearsal dinner was set for Thursday night.  Cara, the baby boys and I drove down to the banquet hall where the dinner was being held, only to find two things.

1) Camden had a giant poop explosion while wearing his nice outfit.
2) The hall didn't have electricity or air conditioning.

As bad as I felt for Jeremy and Ashley that their special dinner was experiencing a hiccup, I have to be honest and say I felt worse for Cara and myself.  Two small kiddos who are already out of their element, are now hot.  Super.

The guys (my dad included) caught a Cardinal game on Friday while the Texas Rangers were in town.

The wedding was Saturday in a beautiful church in Columbia.  Because the wedding was taking place in the middle of Liam's nap time, Webb stayed home with him, and Cara, Camden, and I ventured out to attend.

I am not joking when I say that four minutes before the ceremony was to start, Camden had yet another giant poop explosion while wearing his other nice outfit.  This child has impeccable timing.

Cara and I literally ran into the bathroom and changed him.  Thankfully, the pants were salvaged from the poop and he spent the rest of the ceremony in a onesie and his cute little slacks.  The poor baby was hot in the stuffy church, but I told him it would be inappropriate to be naked in church.

The ceremony ends and I started hearing whispers that it was "raining" outside.  I wasn't worried, but excited at the idea that a "little rain" might cool things off.

Ba. Ha. Ha. Ha.  Apparently I've been away from the Midwest for too long.

This was me after running to the car with Camden and getting him strapped into his car seat. 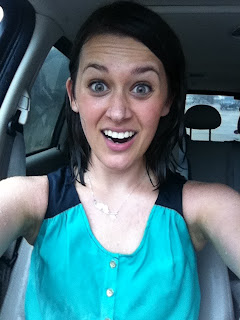 Totally and utterly drenched even after Cara ran out and brought the car as close as she could.  I'm pretty sure I gave the other guests a pretty good show as my dress was clinging to my ass.  You're welcome.

Thankfully, we had plenty of time to go back home so I could dry my dress (and myself), and get Camden in some reception-worthy clothes. 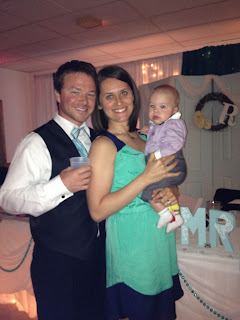 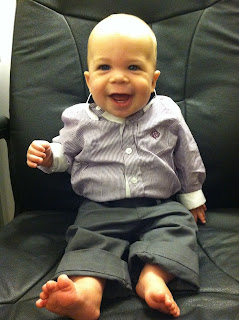 This trip was special in a lot of ways, but the most special part was that it was the first time a majority of Ryan's family members were meeting Camden - including his three great grandparents!!

The awesomeness doesn't stop there.  I realized that because my parents also came to the wedding, all of Camden's grandparents were in the same place.  Who knows if this will ever happen again.


I mentioned before that it took Liam some time to warm up to his baby cousin, and understandably so!  The last day of our stay, Cara and I were down on the floor with the boys when Liam looked like he was trying to tell us that he wanted to hold Camden.  I think my heart literally melted from the cuteness. 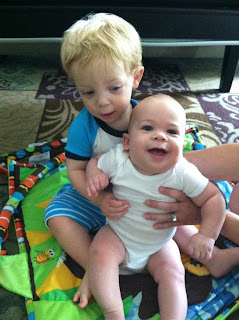 He held him for about six seconds and by then had had enough.

This trip was nuts.  It was our first time traveling with a small child, our first time trying to keep our routine/schedule away from home and in a different time zone, and we were busy trying to see a lot of people.  Looking back, I'm flooded with memories of the craziness.  But really, it was the best kind of crazy.

Can't wait to go back in November for Becky's wedding.