I need sleep.  In the worst way.

To get right to the point - Camden is not a super duper sleeper, and a recent bout with croup and a double ear infection has sent him into the depths of sleep hell.

Our recent trip to St. Louis kind of put me over the top.  As if the last six months weren't enough, we were going nonstop during the visit (in a good way!) and I was literally drained of everything I had left*.

*Ryan and I were having a conversation before leaving and he enthusiastically said, "Well, my batteries are recharged!!" (in reference to having fun seeing friends and family).  I replied, "Well, that's great honey, because my batteries are dead."  True statement.

Why is it that some babies are practically born great sleepers?  I have a couple friends who have new babies and I'm not kidding when I say that they sleep better than Camden.  While I'm happy for them that they are getting good sleep - I think my teeth are starting to hurt from the jealously.

I feel like we do so many right things.  And a lot of nights we are so close... But not quite there.  Camden has slept through the night once.  And even on that night, I was up several times... to check and make sure he was still breathing.

A few months ago I borrowed a baby sleep book from Jessica, and at the time, the thought of sleep training Camden made me cry.  It was overwhelming and the thought of leaving him to cry it out (even a little bit) was just too much.

This afternoon after work, I saw my general physician and we were talking about my current state of exhaustion.  She asked me how long it's been since I slept through the night, and I started to cry.  As in - I had to dry my eyes and swallow the giant lump in my throat in order to answer her question.

Why the tears and lumpy throat?  Because I do not know how long it's been since I slept through the night.  Maybe some night between Halloween and a few days before Camden was born.

What I do know is that this kiddo is lucky he's such a happy boy.  If he was a crabbypants then I'd be in a whole other realm of exhausted. 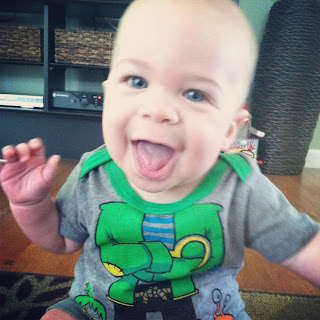 I'm thinking sleep training is in our near future, because the thought of it isn't making me cry anymore.

The thought of many more interrupted nights of sleep sure is.

Email ThisBlogThis!Share to TwitterShare to FacebookShare to Pinterest
Labels: Mamahood