Today for work, I got to play media escort.

CVN 74, the John C. Stennis came back home today, and around 11:30am it pulled back into Puget Sound Naval Shipyard after a seven month deployment.  4,000 family members and friends were gathered on the freezing pier to welcome their sailors home.

My job was to follow around someone from the Seattle PI and make sure he 1) Didn't take any photographs of things he shouldn't have, 2) Didn't ask any politically-fueled questions, and 3) Made the homecoming the focus of his story.  Easy enough, right?

This experience was truly incredible.  Besides freezing my patooty off, I was completely in awe of the thousands of people that came to welcome home this ship and the "feeling" that was in the air. 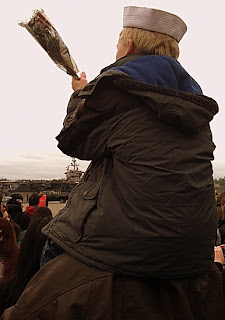 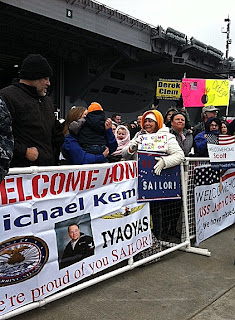 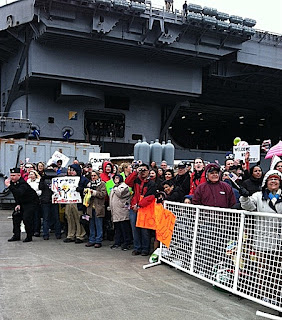 There was excitement in the air from grandparents, parents, wives, husbands, fiances, girlfriends, boyfriends, children, and friends who were all anxiously and patiently waiting in the freezing cold.

We (the media and the escorts) had a front row seat to all the action.  I felt so horrible for everyone waiting for their person to come off the ship.  Even after they pulled up to the pier and tied up, we had to wait another 30 minutes or so before anyone actually came off. 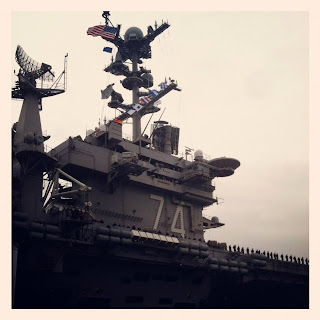 The best part was getting to witness all of the reunions.  The one's that got me the most were fathers who were meeting their children for the first time... Babies that had been born while they were out on deployment.  It melted my heart in a way I don't know I can really describe.  I cannot imagine what that would feel like - for the father or the mother. 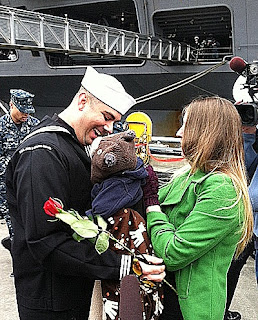 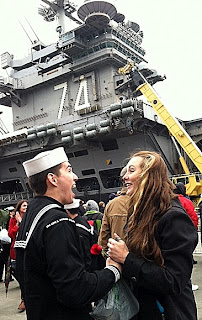 There were two proposals that had been arranged, but they happened so fast that I didn't get to snap a picture fast enough.  Darnit!

When I was getting briefed before heading down to the pier, the Public Affairs Officer for our Naval region was talking about how cool it would be if someone from the media was able to capture two male sailors kissing on the pier.  I know everyone has very different views on this subject, but because of the recent repeal of "Don't Ask, Don't Tell," catching this sort of thing would be a really big deal.

Just as the Seattle PI photographer that I was escorting was about to wrap up, a male couple happened to catch his eye and he started running after them.  So, I had to start running too.  This was quite difficult because my legs and feet were not wanting to function.  Anyway, his eye and running made up for it.  He was able to capture a sailor being welcomed home by his boyfriend.

This experience served as a reminder of all the things I take for granted.  Most importantly - I have my freedom because of the sailors I welcomed home today, and the rest of our armed forces.  And, I get to see Ryan whenever the heck I want.

I would love to do this again some day, but maybe in the months between June and October when it's a little bit warmer.

Email ThisBlogThis!Share to TwitterShare to FacebookShare to Pinterest
Labels: Photography, Stories, Thoughts, Where we live, Work