It's a Baby Shower!

Sunday was the big baby shower day.  As luck might have it - it was the day that my sickness started escalating.  Who doesn't want to come to a baby shower hosted by a gal who sounds like an geriatric smoker?

I sound and feel worse now... But that's beside the point.

The shower went great.  The biggest hiccup was that we were planning on 20 guests and only 10 showed up.  We had a lot of extra food, but when is that really a problem?

I was initially worried about decorations and the small details of the party - but Party City and small sunbeams of my own creativity came to rescue.

Party City had the perfect "theme" decorations that went with the colors Jessica had been planning on painting the nursery. 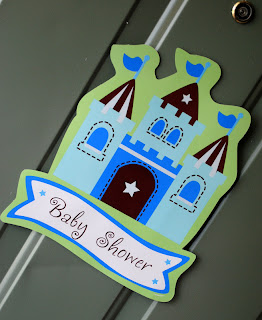 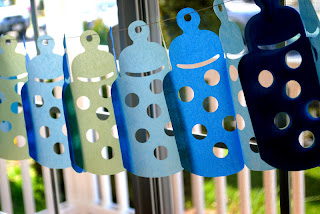 My small sunbeams of creativity came to me in the form of onesie and bib clotheslines - which I am happy to say, were a hit. 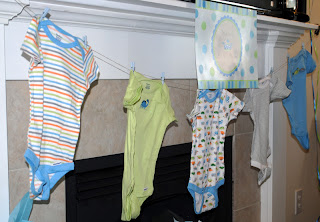 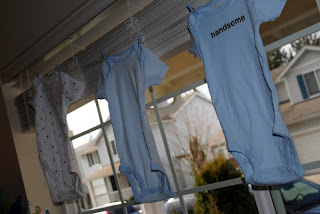 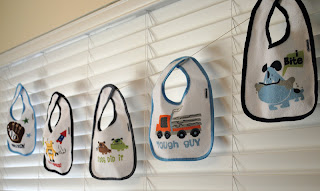 Thank goodness Jessica's sister-in-law offered to help.  She prepared lots of food, and I put together a vegetable tray and cupcakes.  I may or may not have hidden a small plastic baby in one of the cupcakes.  Whoever got the plastic baby (and didn't choke on it!) won a prize. 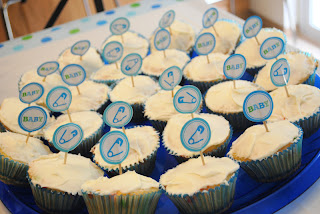 I tried to encourage guests to bring a package of diapers too by enticing them with the hopes of more prizes.  It worked!  Little did they know that the prize was a mere $5 Starbucks gift card.  Who doesn't love a free (and unexpectedly free!) coffee?! 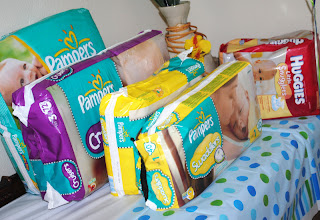 We played one game... The infamous guess-what-melted-candy-bar-resembling-baby-poop-is-in-the-diaper.  Who doesn't like putting their face in a messy diaper?  Even when you know it's chocolate - it still just feels wrong.

Luckily, I was in charge of melting the chocolate, smooshing it in the diaper, passing it around, and sharing the answers at the end.  Alas, I did not participate in the diaper sniffing.  I must say I was impressed with the diapers and their ability to mask the smell of the candy bars.  I guess they did their duty*.

*Duty/Doodies.  If you watch Friends religiously like me, you will understand and appreciate this Chandler reference.

Stacy, a guest at the shower, made this amazing and adorable diaper cake. 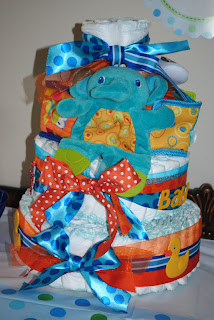 I'd say my first baby-shower-throwing experience was a success.

I had gotten an idea from my sister-in-law's baby shower - to ask guests to bring a baby book (instead of a card) to help Jess build a little baby library.

Yeah, everyone remembered.  Except me.

Jessica's sister-in-law tried to make me feel a little bit better by saying, "Now you can buy a book knowing it won't be a duplicate??"

And yes.  She posed it as a question, not a statement.

I guess if that was my biggest flub of the day, I'll take it.

Take Luck,
LP
Posted by Lauren Peters Blog at 11:35 AM