I'm sure that by now you are all familiar with the big boy in our little family, Brock. 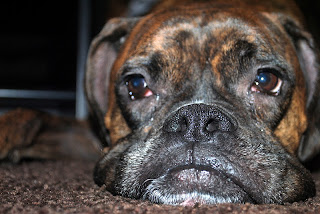 Brock and Sonny are both frequent topics of discussion on this blog, photos on instagram, and in my everyday conversations.  They are our babies!

I have to admit that although we shower both of our dogs with love and attention, and even feed Brock people food - there is one area of their lives that has a tendency to lack.

Don't get me wrong - they run around this house like the crazy animals they are, and play like no other pups.

But.  It seems like taking them on actual walks gets put on the back burner and doesn't happen nearly as often as it should.

Since I was off all last week and am off this week - I decided to make a dedicated and conscience effort to take them down to a local park and walk them everyday.  I had no reason not to!

So, as you can imagine - little Sonny is a piece of pie to walk.  She only weighs 12 pounds and is very easy to control.  Her favorite thing is to smell everything, romp around, and bark at the innocent other walkers/runners.

On the other hand, Mister Brock is majorly not fun to walk.  He weighs anywhere between 70-75 pounds and at times (when he wants to be) can be very hard to control - even with his harness.  His favorite thing is to pee on every bush and blade of grass, romp around, whimper and pull at all the innocent other walkers/runners, and generally pull my ass around the loop.

Last week, each day was eventful for the three of us.  The days have now blurred together but I can give some of the highlights.

- Brock literally pulled me across the grass trying to chase after another runner and his dog.  He does weigh more than half my weight.  It took everything I had to stay on my feet.

- Brock got tangled around a tree/bush and when I tried to pull him back the way he came, he spazzed out, wriggled completely free from his harness and took off toward the beach... Leaving Sonny and I standing there like a-holes.

- While on a straight-away, and on the park side of a house with two small and yippy dogs, Brock broke out into a sprint, causing me to drop his leash and took off running.

- One morning we were immediately greeted by a stray dog.  I was initially really worried because Brock is very protective and playful, and I am always afraid that he will come off as aggressive to other pooches.  After the hieny-sniffing was over, this stray dog followed us the whole way.  For two and a half miles.  The whole way.  Two different little old ladies asked me in their little old lady voices, "Well, why doesn't he have a leash?" (referring to the stray that was following us).  And I just had to laugh and calmly reply, "Because he isn't my dog!"

- I think it was on the third day of walking that both Brock and Sonny finally noticed the water, shore/beach, and the flocks of seagulls that were perched on the shore.  When we were on the water side of the loop, they were going bizerk-o trying to figure out what those funny looking dogs were, and how they were able to fly away from them so fast!

- I am nearly 100% convinced that other walkers/runners must think that Brock has some sort of rabies or strange mental disorder because of how slobbery and frothy he gets.  The slobber that is all over his jowls and face paired with his sometimes erratic behavior is a little frightening.

- At least one walker/runner a day would look at me pitifully (including a little side-head-tilt) and ask, "OK, so who's walking who?" 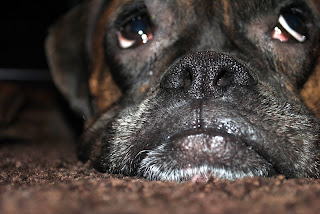 Needless to say - Brock is full of energy, and loves to go on walks.

But maybe now it's easy to see why walks get put on the back burner?

Eh, not a good excuse.

I know that I (ahem, we!) need to be better about walking them more consistently - and that is one my many New Year's Resolutions... As it was last year!

We'll see how it goes.