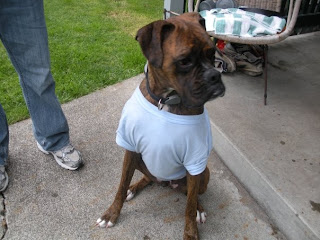 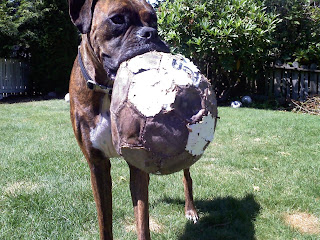 Brock weighs about 75 pounds, but thinks that he is 12 pounds... The size of Sonny.  It's amazing what he won't do to lay on your lap, lean and cuddle up on you.  He loves to give kisses and generally invade your personal bubble.  One of my favorite things about Brock is his bark.  He has a very mean and ferocious bark, but in reality - all he would do is gum you into an oblivion with his massive jowels and under-bite. 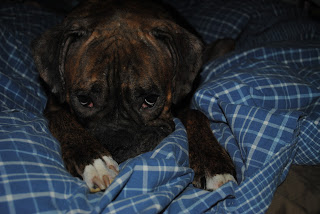 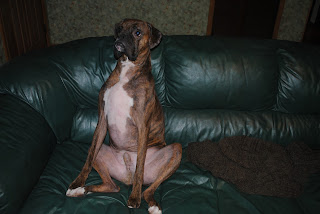 Does he think he's human?
And he likes to talk to you while you are in the shower: 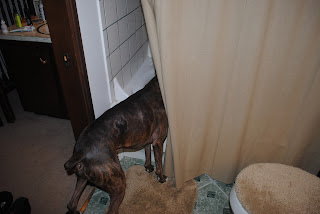 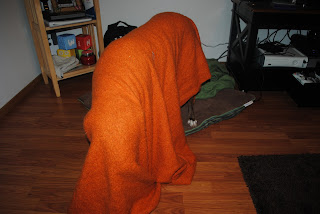 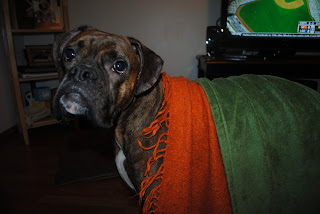 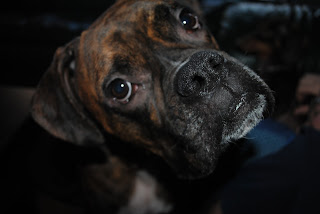 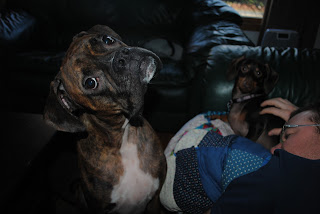 I have no qualms with referring to Broccoli as "special needs."  He has food allergies, and although we haven't 100% identified the root cause of the allergies... We are trying.  I don't know how much time (not to mention money) we have spent with our veterinarian trying to figure out a strong plan of attack.  We have tried gluten free dog food, hypoallergenic dog food, hand preparing him meals of ground lamb and white rice and prescription strength antihistamine.  Nothing seems to kick his allergies completely.  He loses patches of fur on his backside, and his fur/skin becomes irritated and red.  Even in between the poor boy's toes get red!

We take other measures in an effort to try and keep his skin irritation to a minimum.  The blankets that go in his cage get washed in perfume and dye free laundry detergent.  He gets a bath in super-mild oatmeal shampoo, and the water cannot be too hot.  Come summertime we will put out Brock and Sonny's swimming pool.  It is pure entertainment to see them play in that thing.

Good thing we love you so much, buddy boy.  You are our big little man.

Email ThisBlogThis!Share to TwitterShare to FacebookShare to Pinterest
Labels: Puppies