Ryan and I like to play this game called Remind Me.  Well, I guess its not technically a game, but it might as well be.  I don't know how many times a day or week we will say to each other:

"Hey, remind me..."
What one needs the other to remind them of varies from taking out the trash, emptying the dishwasher, sending in a portfolio for school, looking at a website, or making a phone call.  I say these remind me instances occur often, which is completely true.  But how often is it that the one who is supposed to remind the other actually pulls through on their end of the bargain?
Not often.
I can't tell you how many times I have said to Ryan, "So, I was supposed to remind you of something... But I'm not really sure what it was.... So this is me, reminding you that I was supposed to remind you... Of something that I forgot."  This usually leads to us pondering what was so important that it needed reminding in the first place.  And we usually make faces to each other that look something like this: 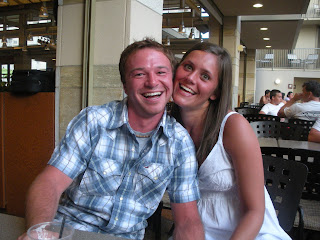 My favorite is when I tell Ryan, "Remind me to remind you that you have a doctor's appointment on Thursday." :)  That one is always super successful.
Not.
Our lack of mental retention power is one of the many "little things" about our relationship that I truly love and treasure.  The other night Ryan was looking for two things before bed time...
1) his cell phone
2) the Back to the Future trilogy
So he calls from the living room, "Where are the DVDs?" and I responded from the bedroom, "On the entertainment stand."  Then he asked, "Where's my cell phone?" and I laughed and responded from the bedroom, "On the kitchen table."  Without a word, Ryan grabbed his things, came into the bedroom and said:
"You're good."
At least I can remember something.
Remind me...
Take Luck,
LP
Posted by Lauren Peters Blog at 7:10 PM