There is no real point to this, other than I want to remember that one time we tried to venture out and take Camden to do something fun.  And failed miserably.

On Saturday during Camden's nap, I called and asked my mom if she and my dad would be willing to watch Cam that night so Ryan and I could go have a dinner and movie date.  She happily obliged and we said we would drop him off around 5:00.

He woke up from his nap ready to rock-n-roll, and it was crummy weather-wise outside, so we got our things together and decided that we'd go bowling before dropping him off with Grammy and Papa.

We've been to the local bowling alley enough that Camden now knows where we are when we pull into the parking lot.  We walked into the bowling alley as a slew of birthday party guests were leaving, feeling confident that one little lane would be open for our use.  We get to the counter and are told there is a 45 minute wait for a lane.  Ha.  A 45 minute wait with this tornado child?  No, thanks.

We headed towards the door to leave and Camden started crying big 'ol tears, his hands desperately reaching out towards his beloved lanes, yelling, "Bowliiiiiing!  Bowliiiiiing!"  I had been carrying him at this point and had to pass him off to Ryan when he started flailing and kicking.  Many more tears were shed as we strapped him into his car seat and tried to explain that we would have to come back another time.

I felt really bad that we failed at our attempt to do something fun, and then had the idea to head to the local indoor play place (think bouncy houses).  We pulled into a mostly empty parking lot and were encouraged.  Until we got closer to the door and saw that "open play," had ended just 20 minutes ago.  We could see people inside, so like idiots, we went in and asked the lady at the front desk if we had indeed missed open play.  She assured us that we had, so we carried a distraught Camden out of another building.

We were really starting to feel like parents of the year at this point.

I was out of ideas, so Ryan suggested just heading to my parents' house to relax for a bit before heading to dinner.  They live across town from us, so this made sense.  We started driving towards their house and I was feeling extra bad about our failed fun attempts.   As a last ditch effort, I suggested we go drive through the local state park.  Normally, I would never have suggested this, but recently, thanks to Dora the Explorer (whom I loathe), Camden has started calling any heavily wooded area a "rainfowest (rainforest)," so I thought this might be a semi-redeeming consolation activity.

We pulled into the park and there were immediately ohhh's and ahhh's coming from the backseat.  He pointed out trees, squirrels, cows (I assure you there were none), fallen trees, clouds, and water, and informed us many times that we were in the rainfowest.

Feeling somewhat redeemed, we headed for the exit when Ryan spotted a big tree and suggested we get out and take a picture to document this experience. 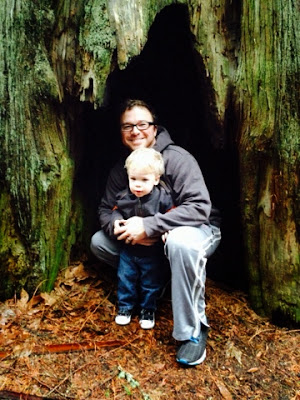 Third time's a charm, I guess.

We dropped Cam off with my parents, went to the grocery store to stock up on movie theater treats, and went to dinner.  About halfway through dinner Ryan asked if I would rather rent a Red Box movie and just go home to be cozy instead of going to the theater.  I didn't hesitate in whole-heartedly saying "yes" - as long as I still got to eat my treats.
Take Luck,
LP