Where was I?  Ah, yes.  Promises of puppies, farms, parks, shenanigans, and sap.

Friday night after Huck was in bed, Tiff, Hammy, and I drove out for something right as it was getting dark, and coincidentally, right as a storm was rolling in.  Tiff thought the car ride might help lull Cam to sleep (she's a genius) so he got to tag along and listen to us chat.  The clouds were dark and ominous, and my blood pressure was rising.  I may have spent four and half years in the Midwest, but I'm a big sissy when it comes to storms and bad weather.

The good news is, we survived.

Saturday morning, we took our time guzzling coffee, eating breakfast, and being entertained (in between episodes of Bubble Guppies and Yo Gabba Gabba, of course). 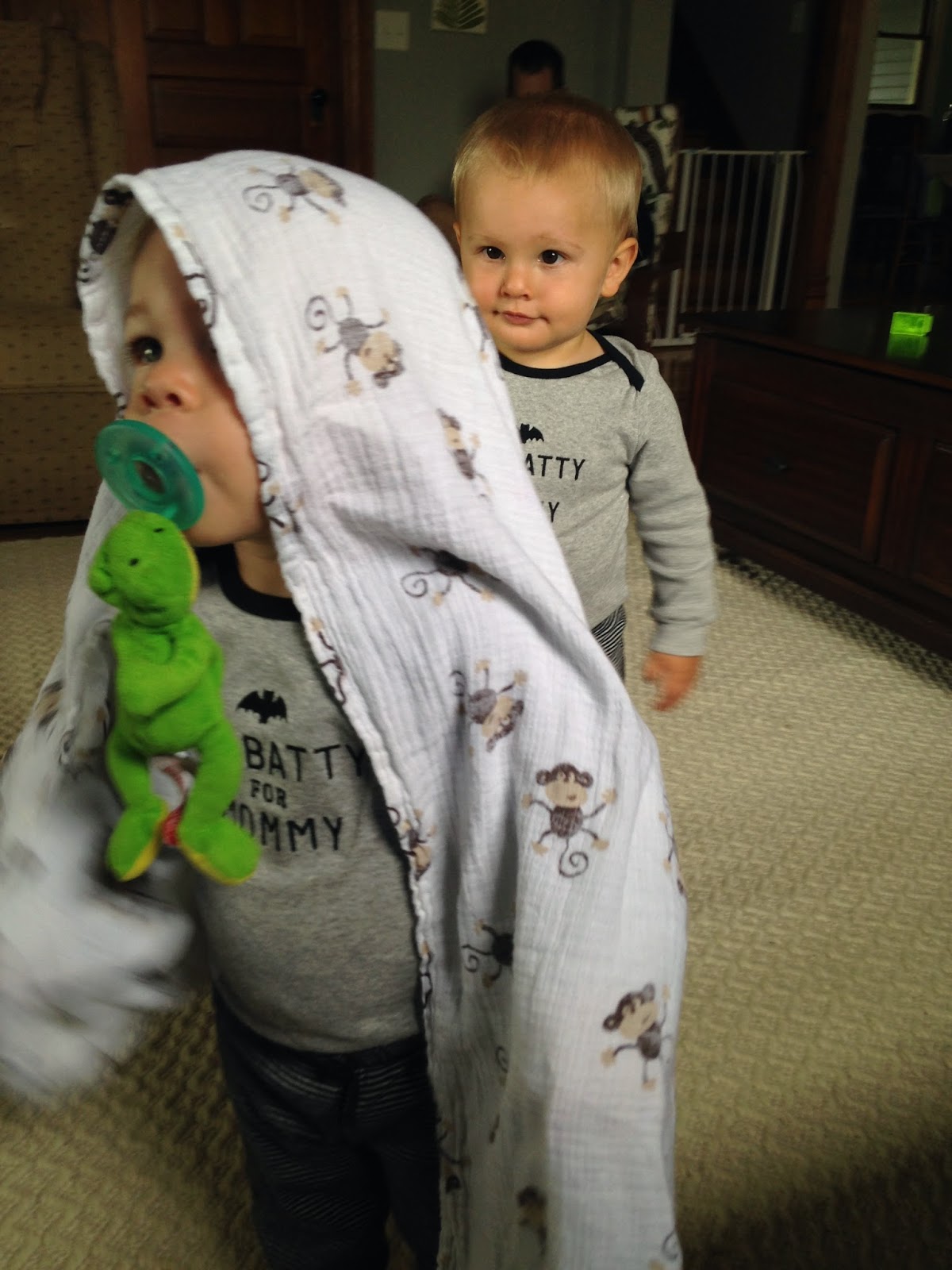 We finally got our shiz together and made our way Ryan's Aunt and Uncle's pumpkin farm.  I've heard Tiff talk a lot about it over the years so I was really excited to see it in person.  Even though they hadn't opened for the season yet, it did not disappoint.

Camden was, of course, in awe of the farm equipment, generally happy to frolic through the property, and terrified by their giant Red Cow.  He was much more interested in the sow, piglets, sheep, and chickens.  And rocks.  And puddles.  Cam even got to take a baby pumpkin home as a souvenir. 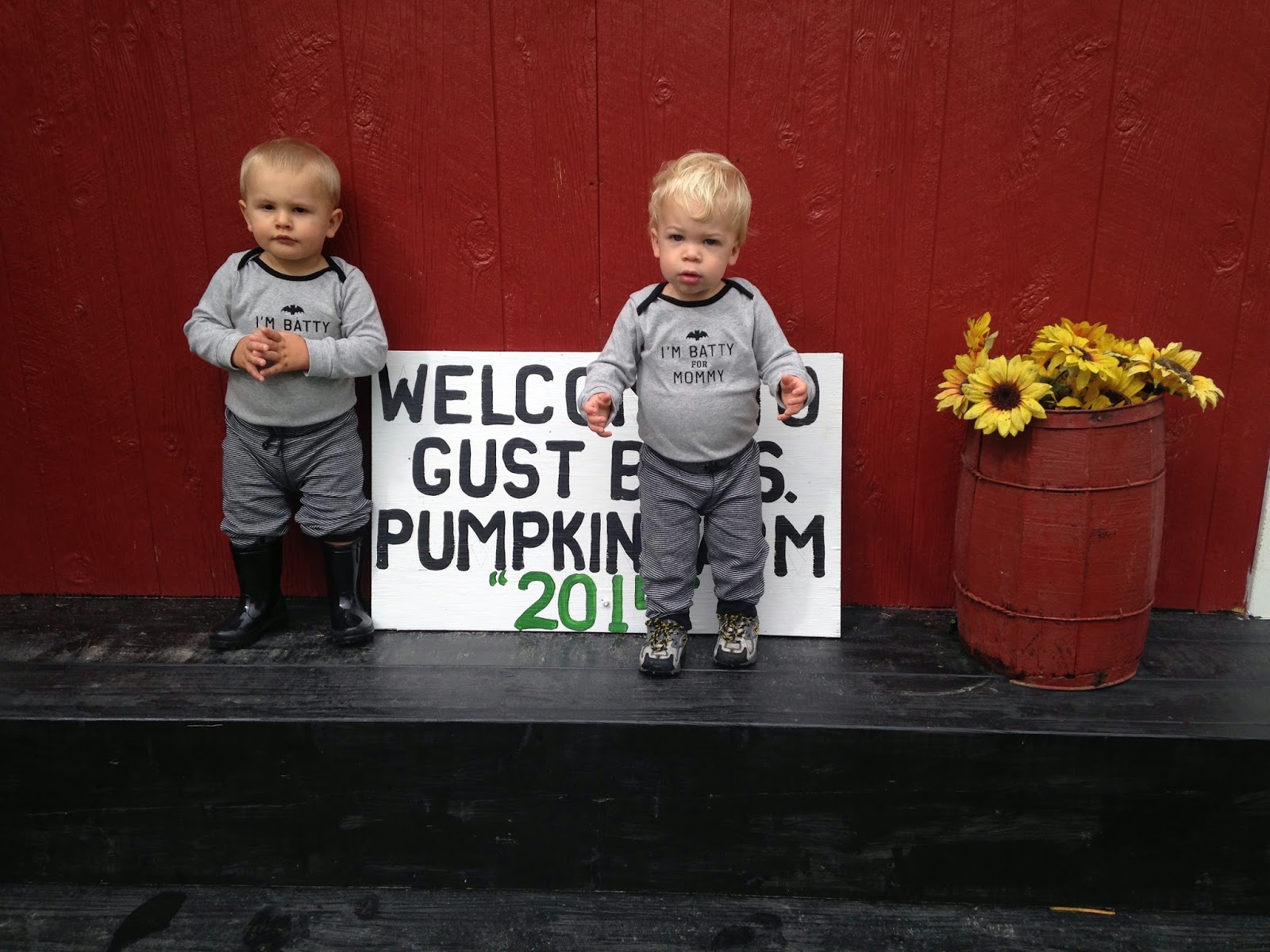 After nap time, we ventured outside to see the English Setter puppies that their bird/hunting dog recently gave birth to.  Thirteen of them to be exact. 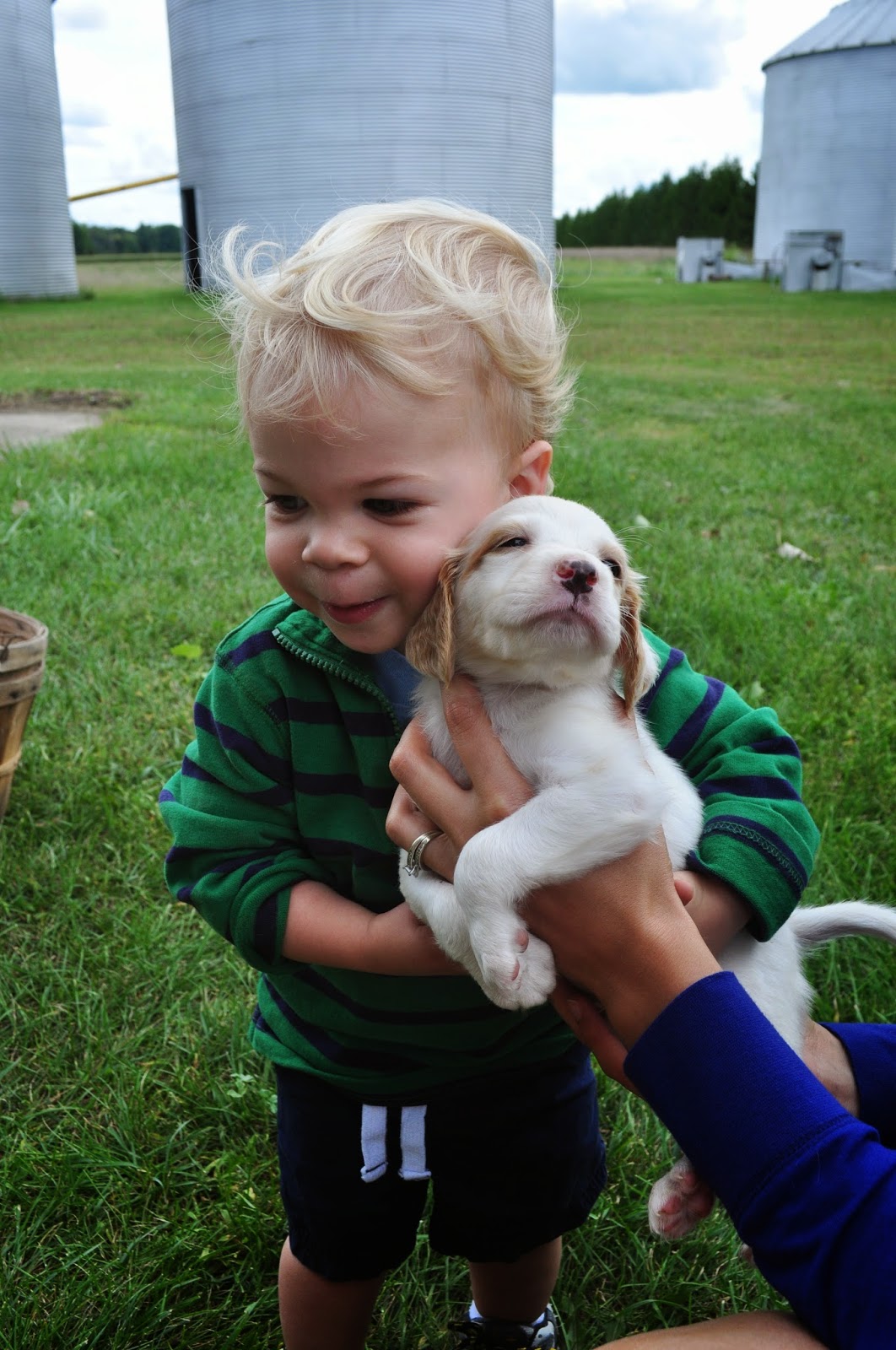 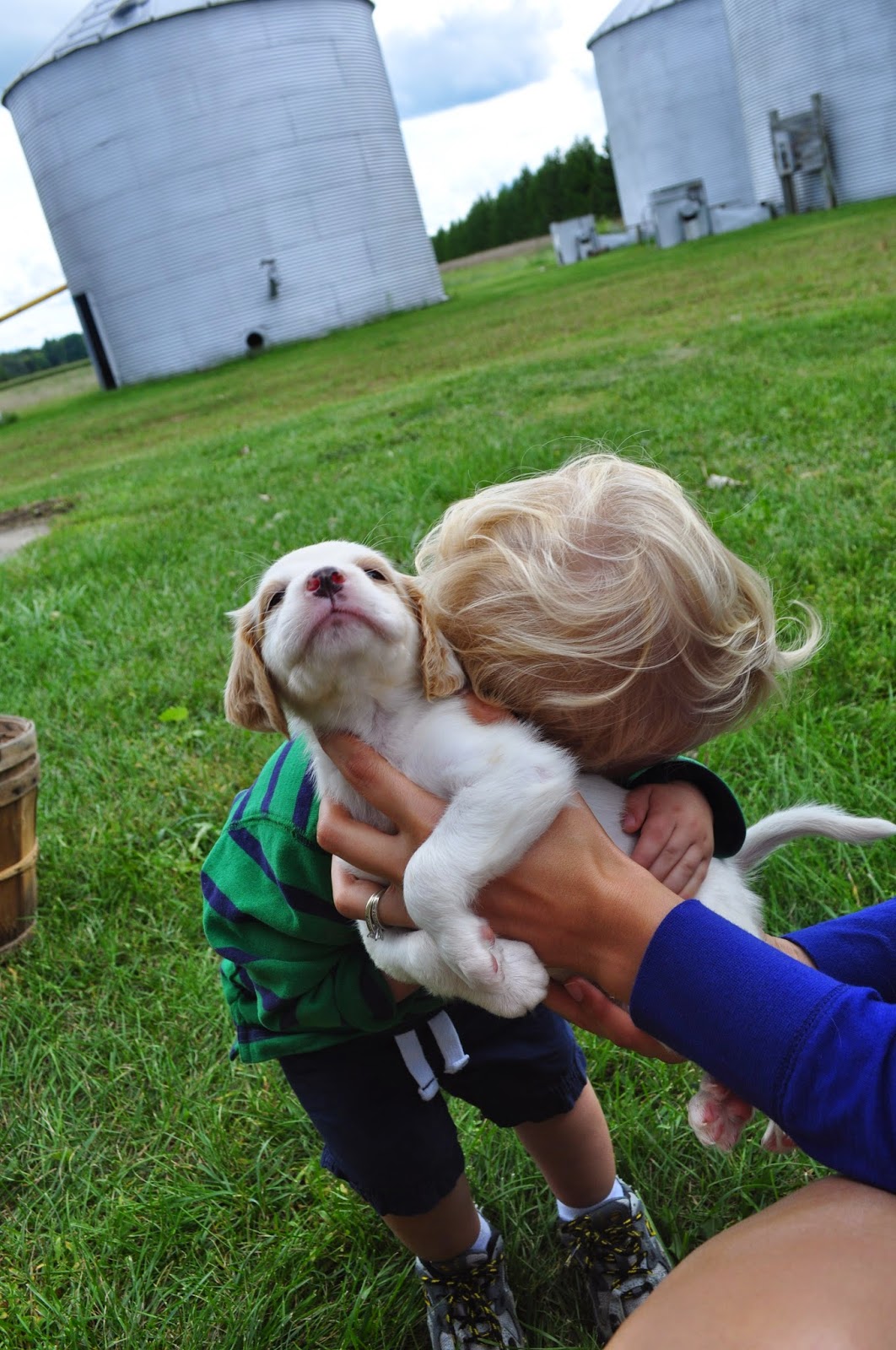 Camden was allllllll about these puppies.  He toddled around the pen wagging his finger at them, saying, "no no" (for whatever reason), and was happy to hug them and kiss their noses.  If I remember correctly, Sir Huck was more interested in a broom - but I think to him, the pups were just old news.

Ryan's parent's farm is only a quick Gator ride across the highway, so we all hopped on to go say hi.  More farm equipment for Hammy to fawn over and more cows to terrify him.  He's becoming quite predictable at this point. 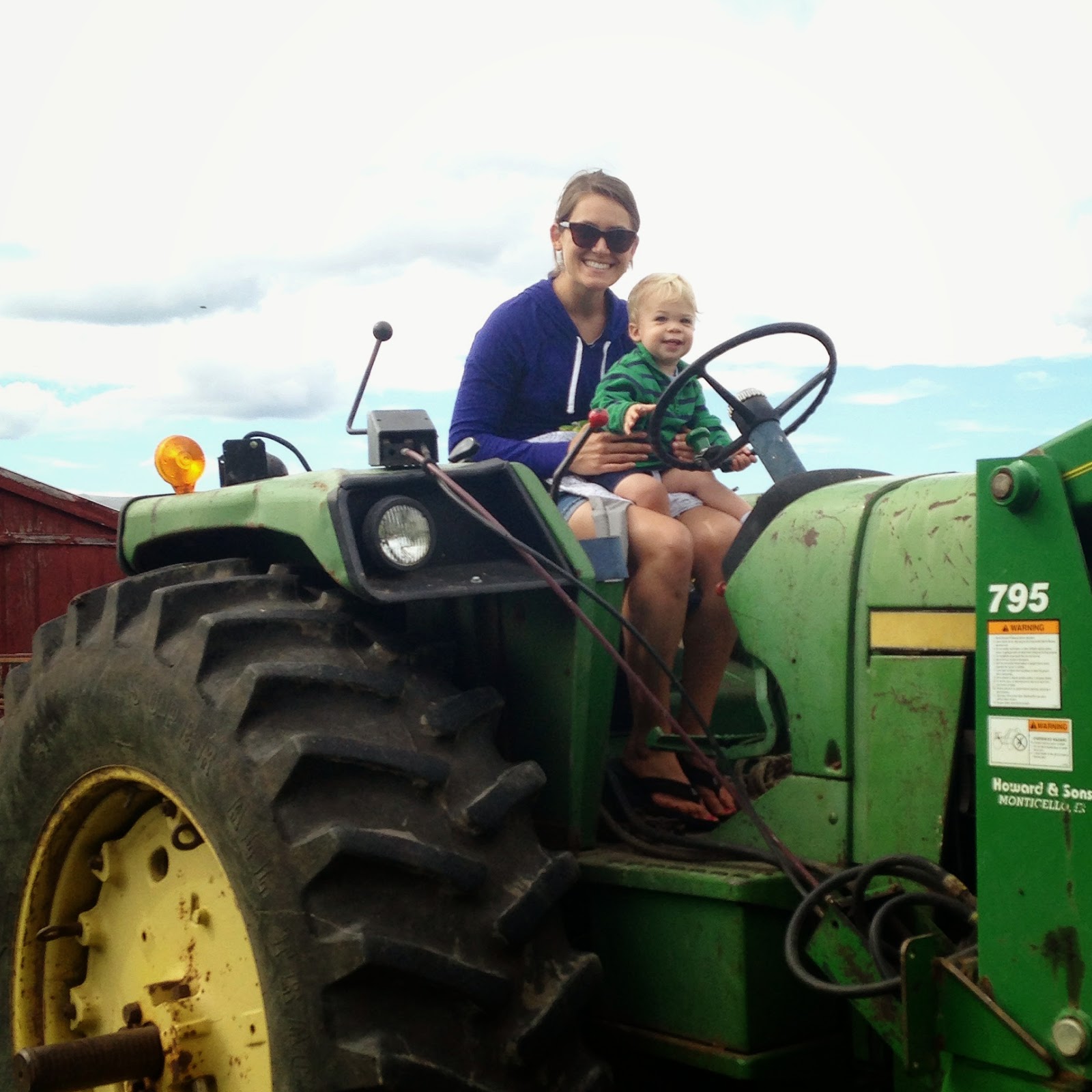 The boys loved to climb all over and play on this one particular chair in Tiff's living room.   Clearly, as evidenced by the number of pictures I have of them sitting in it - it was the only place they would sit still long enough (together) to get a picture. 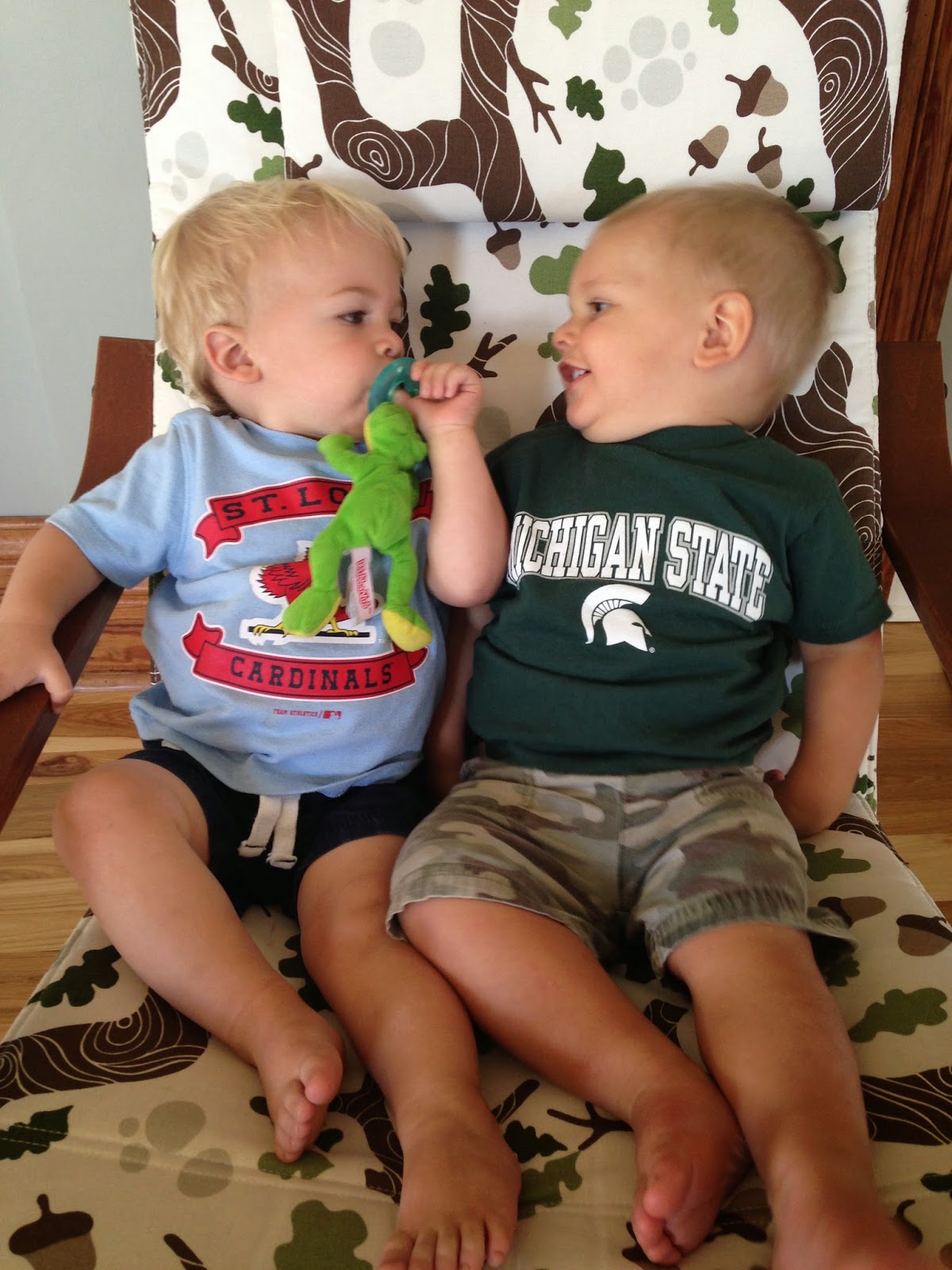 Several times during each day and every night after Huck was in bed, Cam would scramble on over to his Aunt Tiff and insist that she hold and/or snuggle with him.  My heart became this big pile of goop every single time. 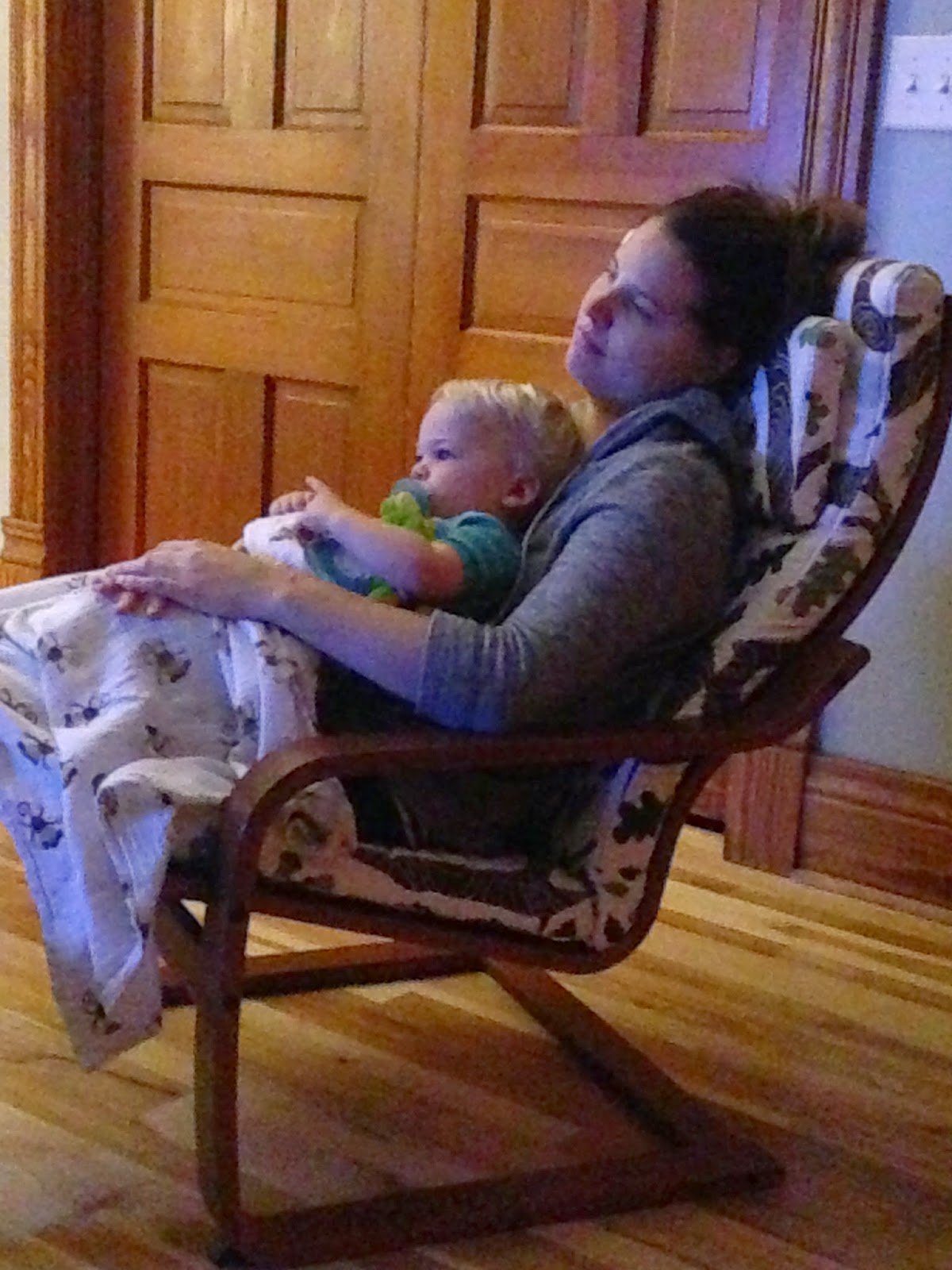 Our last morning on the farm was pretty quiet and included coffee (are you seeing a trend?), a walk, and the park. 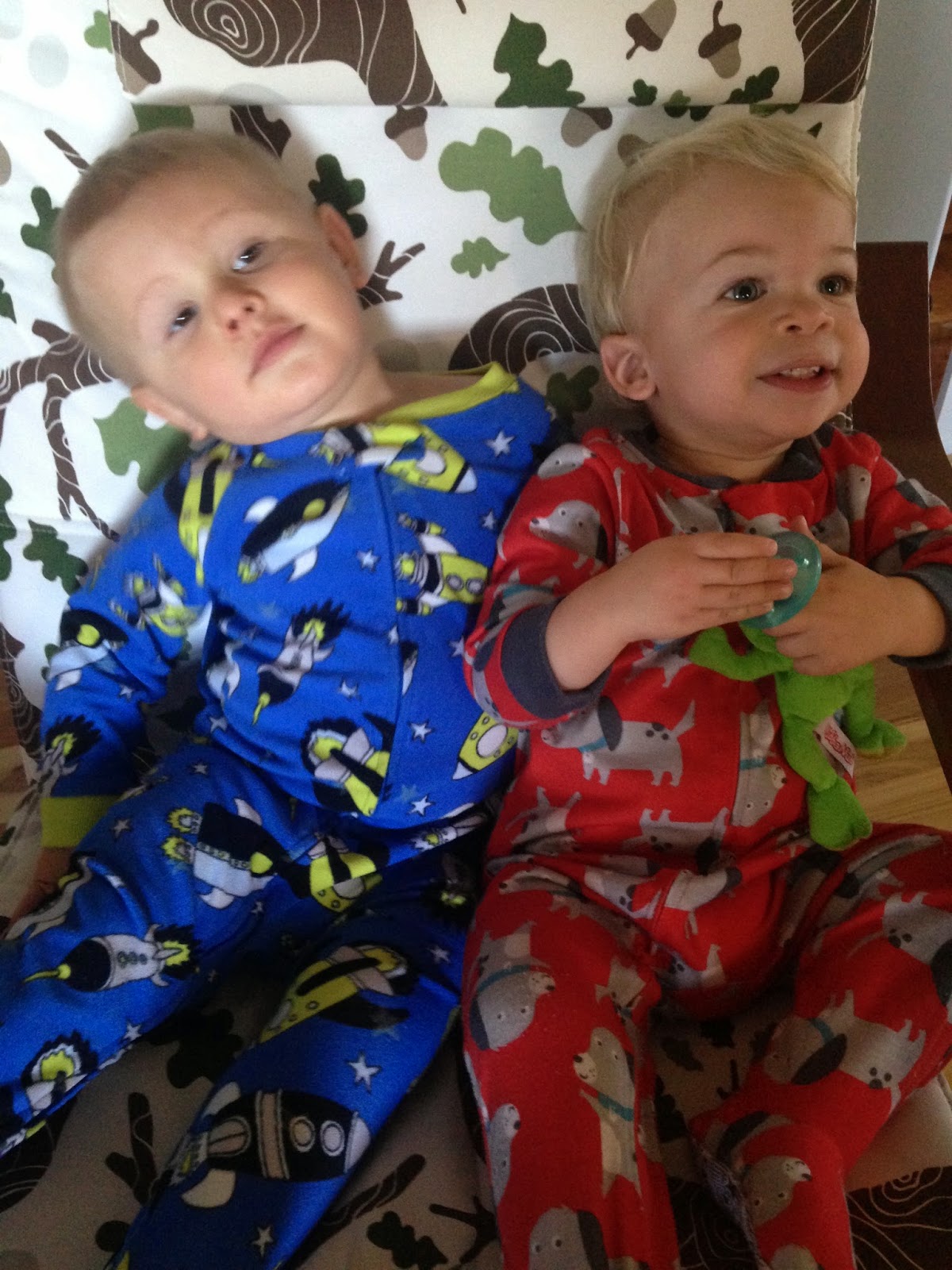 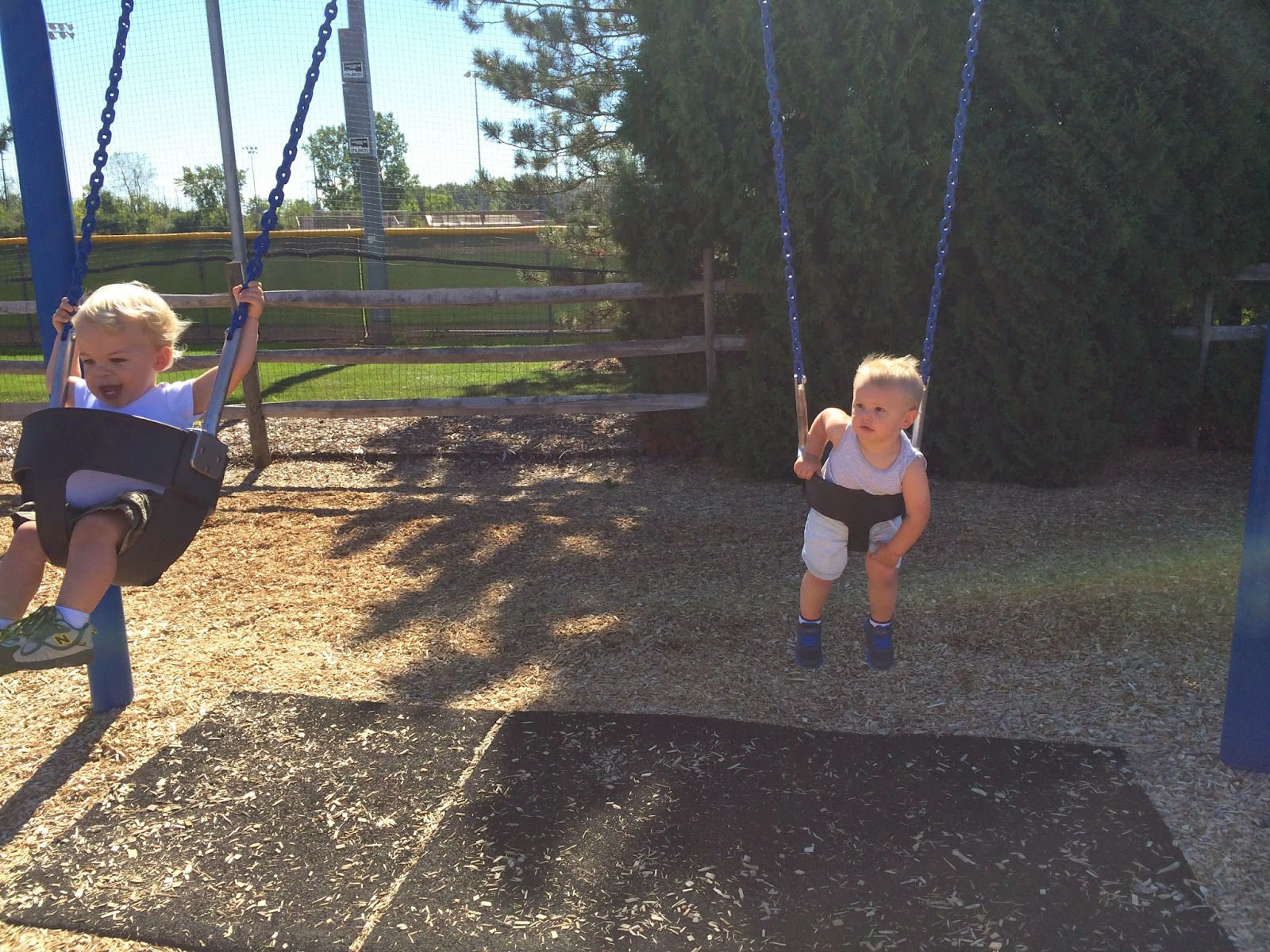 When I take Camden to the park, it's usually by myself.  Let me tell you how much more enjoyable it is to be with a friend for the both of us.  It's crazy enjoyable.

We made one last stop at Panera, whipped out our phones to keep the boys quiet for the last five minutes of the meal (don't judge us), and went back home to get packed up.  The boys took a very short nap, and we said our goodbyes. 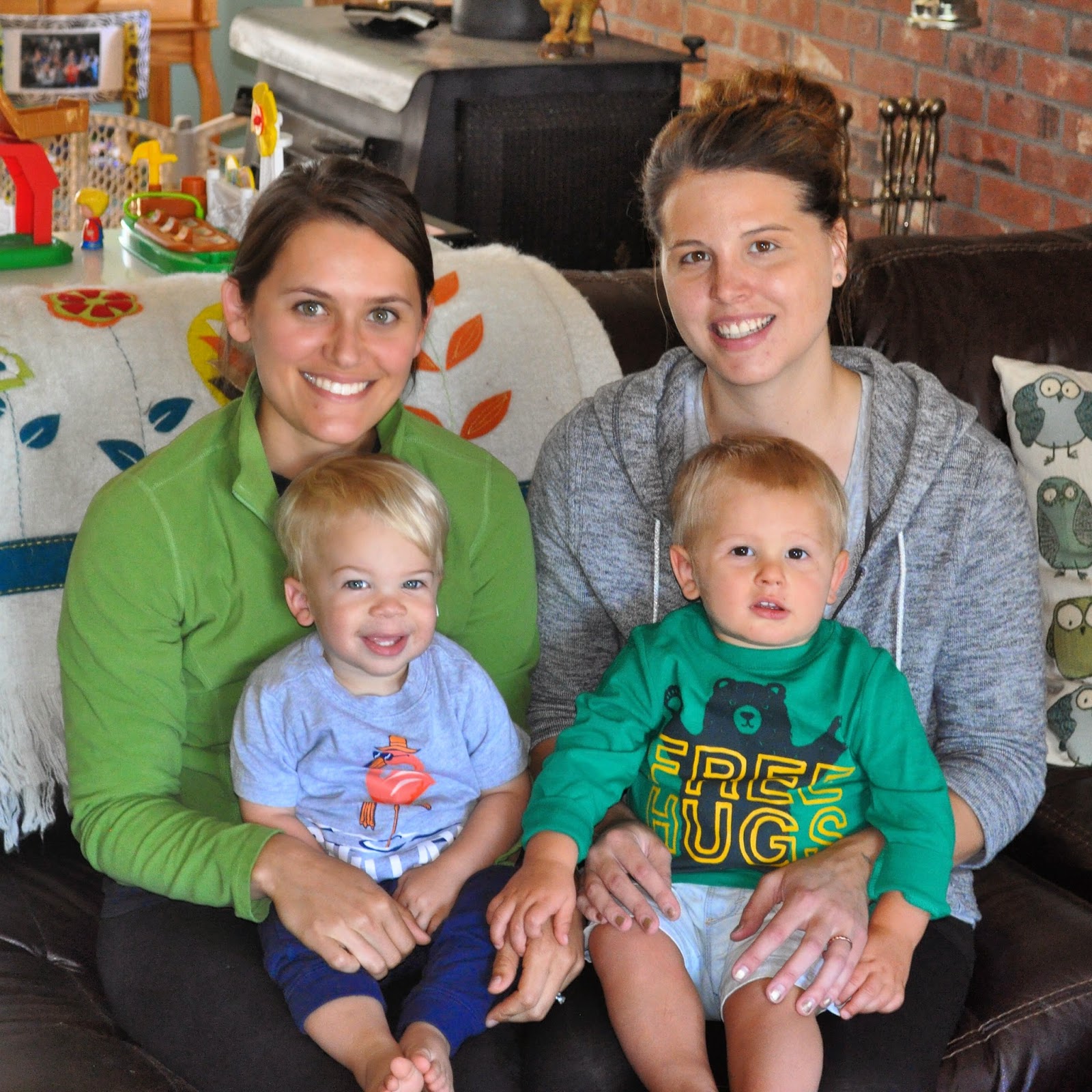 I had been worried about how Camden would do on the flight to Detroit, and I knew that it fell in line with his nap time.  The return flight didn't fall anywhere near his nap time, so to say I was worried is a giant understatement.

I let him run wild (not even exaggerating) around the open gate next to ours until the final boarding call was made.  I've learned that we don't board when they offer early boarding for parents with small children - we board last.  We board last to minimize the time on the plane. 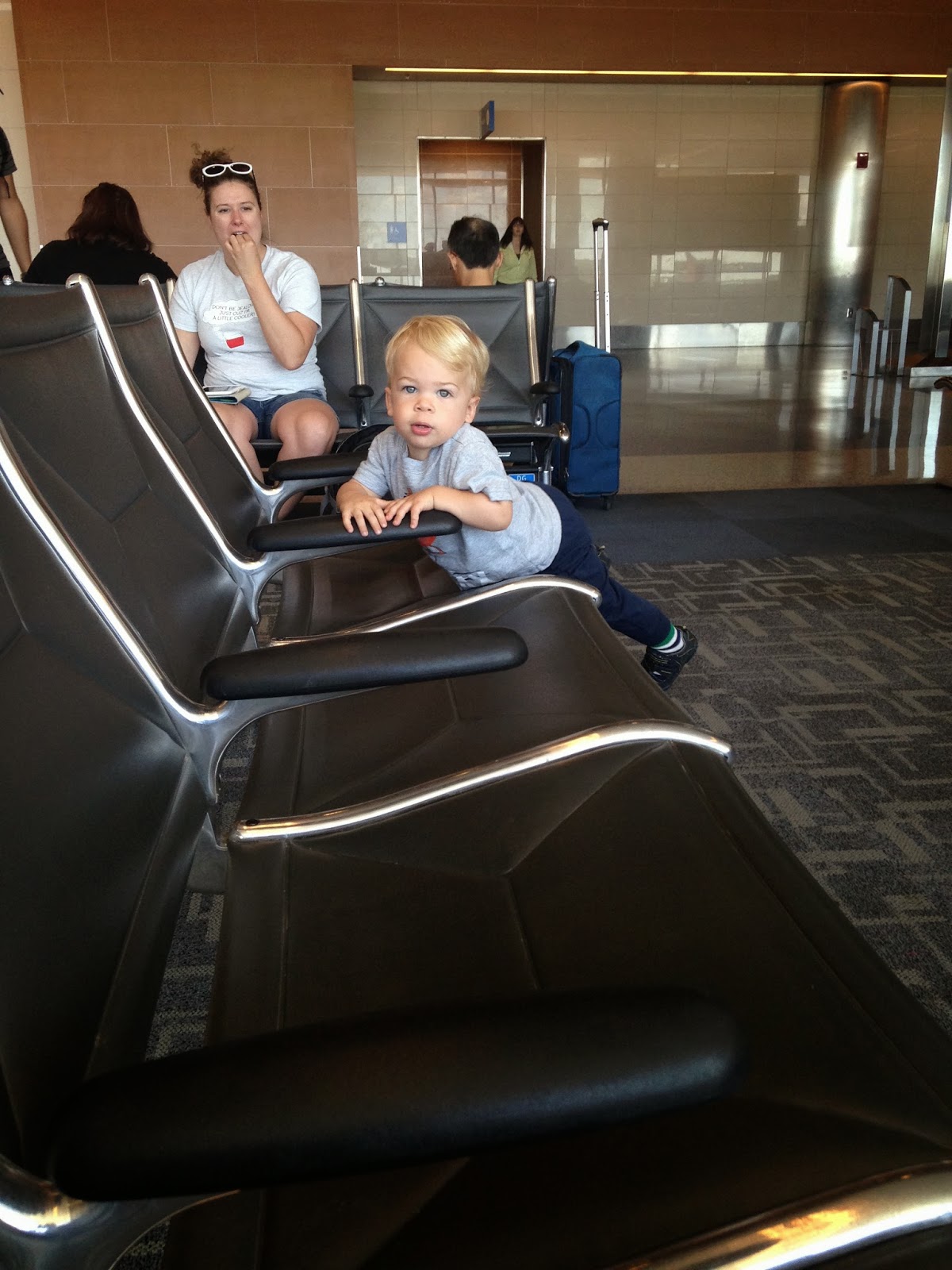 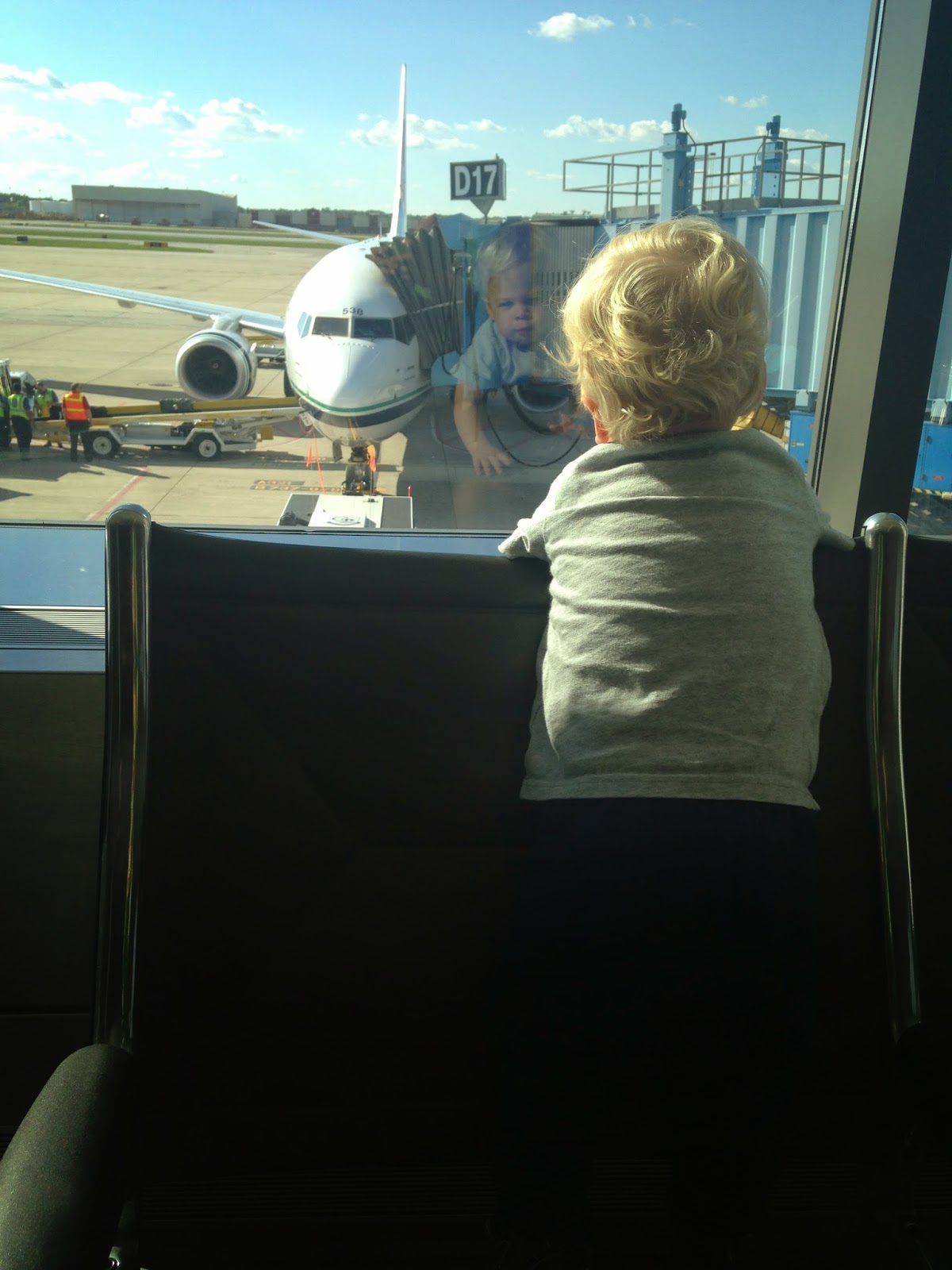 I wish I could have video-recorded the death looks I got as we walked down the narrow aisle.  Everyone loves a baby on-board and love was in the recycled air.

He didn't do as great as he did on the flight there, but he did pretty darn good considering he was awake the entire effing four and a half hours.  I worked my booty off (although unfortunately, not literally) entertaining him and keeping him from flying off the handle into tantrum town.  I knew it was close.  The guy in front of us told me that he didn't even realize Camden was behind him, so I considered that a success.

I say the little bugger didn't sleep a wink during the flight, but as soon as we touched down and started taxiing to our gate - I felt his little body get a little heavy and looked down to see that he was zonked out.  I moved him into the Ergo and he proceeded to sleep until 6:30 the next morning.  Blessed be a tired baby.

So, that was our trip.  Our totally awesome trip.

And don't worry - I haven't forgotten the sap.

Aside from Ryan, of course, Tiff is my best friend.  It's incredible to me to say that we've now known each other for 10 years.  We talk nearly every day and I know that all people say this about their best friends - but I really can talk to her about whatever.  Nothing is off limits, nothing is TMI (especially after pregnancy and having these wild boys).  I could call on her anytime for anything and I know she'd be there.  She is my person.  We're at the same stages of our lives and being able to talk to her, knowing she can relate and assure me I'm not (totally) crazy has saved me from drinking an excessive amount of wine.

Even better than all that?  Is seeing her, someone I love, love my son because he's my son.

The greatest of all?  Seeing the son of someone I love (who I love because he's her son), chase after and invade the space of my son.

Did that make sense? My heart is full.

I made memories that will last a lifetime on this trip.  Unfortunately, Camden won't remember any of this, but I have plenty of pictures to show him just how much fun he had.