... And left me at home with two sick babies.

At first the three of us just had colds - some congestion, runny noses, and little coughs.  I said to him that I hoped things didn't "implode" as soon as he left and I was sort of kidding.

Turned out that's exactly what happened.

Ryan left on Wednesday morning for a 5-day Cancun vacation to attend his best friend's destination wedding.  Thursday morning, Cam woke up with an irritated right eye (red, swollen, no goop) and was a little "off" but was otherwise his normal self. 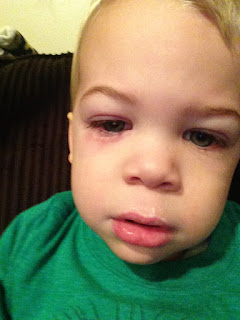 I had planned on taking both kids to daycare like normal, and then coming back at 10:00 to pick Zoey up for her 6 month well check.  My plan was to also take the rest of the day off to just hang with her since we don't get a lot of one-on-one time together.

My plan quickly backfired when Cam took one step into daycare and Ms. Tiffany said, "what's wrong with his eye?"  I said I wasn't sure, but that it was goop-free and he wasn't itching it so I was hoping it was just a side effect from the cold.  She apologized and said she just wasn't comfortable having him stay in case it was pink eye.  I totally understood, accepted that my plan was foiled, and we went back home.

It was a good thing we did.

It only took about 30 minutes for Zoey to go down for her first nap and someone else to snuggled up with me and fall asleep. 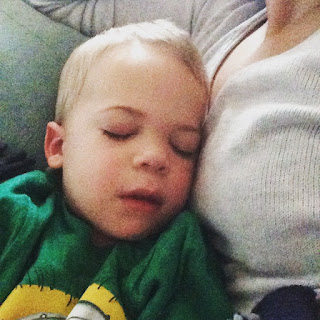 He woke up after snoozing for two hours (what?!) and he was clearly feeling crummy.  His temperature was 101.7.  I gave him some Advil and was happy that we were going to be heading to the pediatrician's office and hoped that she would be willing to take a quick look at him before or after she was done with Zo Zo.

This was my boy on the way to the doctor's office. 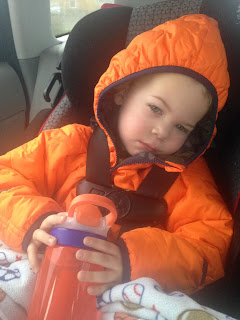 While he was laying comatose on the exam room bench - the doctor checked his ears and they were clear, and looked at his eye and felt like the irritation and the fever was just a virus.  I felt relief and by the time Zoey's appointment was done, the Advil seemed to have kicked in and he was sitting up-right and talking to the doctor about the bouncy house.

I was shocked (but happy) when he took another two and half hour nap at his normal nap time.  He woke up in a decent mood and because his eyes were still free of goop - we had planned on going over to my parents' house for dinner.

Some time passed and his temperature was back up to 102.1 and Zoey had a little 100 degree temperature too.  I felt confident that Zo's temperature was related to her vaccinations so I gave her some baby Tylenol.  I called my mom saying both kids had fevers and asked if they would bring dinner to us.

I gave Cammy more Advil and decided a lukewarm bath could do them both some good.  My parents arrived right as I was getting Cam out of the tub and they could tell his coloring was off and he wasn't feeling well.  The Advil was not working it's magic like it had earlier in the day.  The poor guy was (literally) shivering cold but burning up.  I text Tiff to see what she would do if Huck had a fever like Cam's that wasn't responding to medicine and she said she would absolutely call the pediatrician's office and see what they said.  I knew she was right and called.  I got the nurses line and left a message.

A little more time passed, Camden's fever was up to 136.4 and I called the on-call doctor's line.Thank goodness our pediatrician was still in the office (it was after 6pm) and I could tell her Cammy's downward spiral since seeing him earlier in the morning.  She suggested giving him some Tylenol to help combat the fever even though he had already been given Advil.

I gave him one little push of Tylenol and he started to cry saying "I don't wike it!" but I pressed forward and was then shown just how much he didn't like it.  He vomited all over the place.  I swear my blood pressure spiked just like his fever.  I immediately called the doctor back to tell her what just happened and she asked if he was urinating.  I can't believe I didn't see that as a red flag before the question, but I realized no, he had not gone pee since he woke up from his nap at 2:30 - even though he had been drinking a little water.

She calmly said, "you need to take him to the emergency room."

My heart sank, my blood pressure rose, and I started to cry but managed to make out an "OK, thank you."

I quickly nursed Zoey to sleep and laid her down, changed my clothes, grabbed the iPad, and dad and I put the little guy in the car and we headed to the emergency room.  Mom stayed back with Zoey.  I cannot even say how thankful I am that they had come to us for dinner and were able to help like they did.

We had to wait quite a while to get back to a room, but Cam was just content to sit in my lap and snuggle while he continued to burn up.  I thought it was hot in the waiting room and it turns out he was making me hot.

After we got back into the room (around 8:00 and well past his bedtime) he laid down on the bed and was happy to watch a video on the iPad while we waited.  I was so thankful how quickly he was seen by a doctor, one who did a super thorough check and asked a lot of questions.  He quickly eliminated an ear infection and appendicitis, asked for a chest x-ray, and felt it best to get him some IV fluids, anti-nausea medicine, and more Advil. 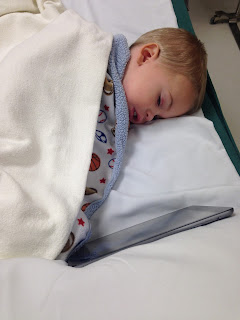 Poor guy was still burning up but cold so the nurse gave him a warm blanket.  Before the x-ray, the nurse put some numbing cream and "stickers" (to keep the numbing cream in place) on his arms in preparation for the IV.  The x-ray was easy and Cam perked up getting to see his "skeleton."

Holding him down and hearing him cry and scream like I've never heard before while he was getting his line in for the IV was god-awful.  I was trying to distract him and sing songs and it was all I could do to keep my voice steady.

Thankfully the nurses (yes, plural) got the line in no problem.  I said to go ahead and do the influenza test (shoving a little stick thing really far up both nostrils) while he was already pissed off.  And boy, did that piss him off.  Thankfully he was content to snuggle with me and hold onto my chapstick.  I can't even describe how calming the chapstick was to him.  It was funny and cute and sad all at the same time.  The poor kid was just absolutely miserable. 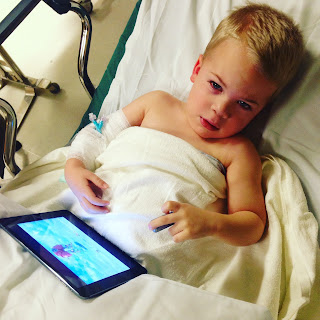 The fluids ran for 30 minutes with some anti-nausea medicine thrown in too.  The doctor came back in and said the influenza test was negative, as were all other tests/cultures they ran on his blood for infection.  We gave him a dose of Advil that he kept down and another dose of Tylenol that he did not.  His temperature was still 103.6 but they felt like with the Motrin and fluids - he was OK to go home.  It was 10:15 at this point and I wasn't going to argue.

He fell asleep in the car on the way home and I put him in our bed.  I figured there was no way in hell I would be able to sleep soundly if he was in his room.  Even though I knew I wouldn't sleep well with him in bed with me - at least I would be able to reach over and feel his temperature throughout the night or be right there if he needed something.

He slept OK overnight and his temperature went down but didn't sleep as long as you would have thought since he went to bed so late.

Ryan still has three days left in his trip, but I sure hope the worst is behind us.  He got to talk to Cam on the phone last night while we were in the emergency room and he said hearing his miserable little voice made him (Ryan) cry because he felt so sorry for him and hated that he wasn't there.  I assured him he was sick but going to be OK and we did the right thing in bringing him to the hospital.

Today he's overall been in much brighter spirits, played with his toys a little bit, and is asking for fruit snacks.  His fever has been up and down but I'm giving him Advil to try and help.  Thankfully, he took a decent nap today and seems OK for now.

Fingers crossed the worst is over.