I have been looking forward to Halloween ever since I found out I was pregnant with Zoey.  I mean, who doesn't get excited thinking about the possibilities of dressing their children in coordinating costumes?!

We were given a perfect hand-me-down lion costume by our neighbors so that sparked the idea of a Wizard of Oz theme and Cam being the Cowardly Lion.  In my daily conversations with Tiffanie, she offered to make a Dorothy dress for Zoey.

To say I was pumped is an understatement.

Tiff, being the brilliant woman she is, suggested taking the kid's Halloween pictures a day or two early - just in case.  I'm so glad she shared that wisdom because someone was not too excited to be the Cowardly Lion while the other was perfectly happy to be Dorothy.

Even getting to draw a lion nose and whiskers on Mommy didn't cheer him up or get him excited. 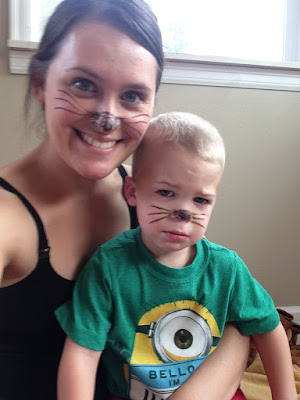 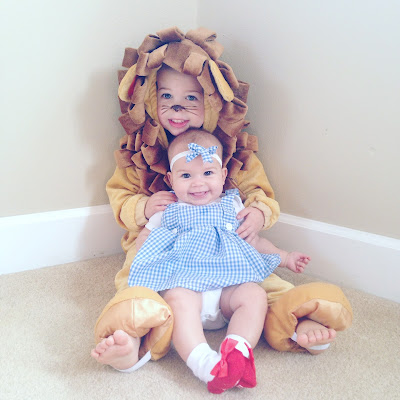 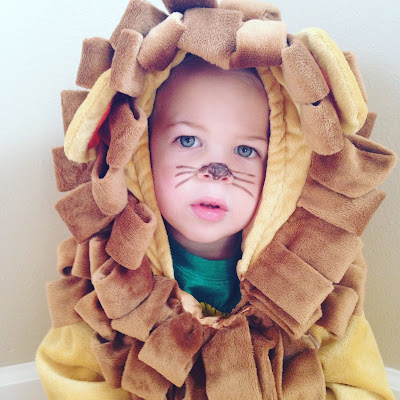 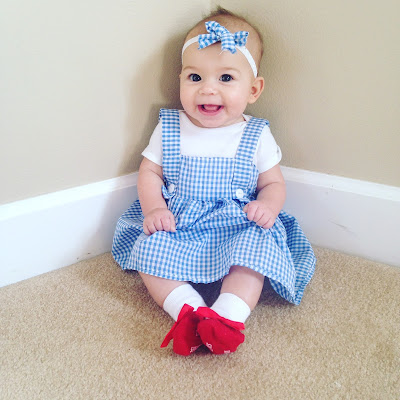 I got my pictures, anyway and squealed in delight that my bribes of M&Ms and getting to watch Toy Story were successful.

Ryan came home shortly after I took the pictures and didn't help the "I don't want to be a lion..." situation by saying, "Don't you want to be something cool?!  Like Batman?!"

So, off we trotted to my second favorite store, Costco, where Cam could choose between being a Minion, Scooby Doo, Captain America, Iron Man, or Batman.

After initially saying he wanted to be a "school bus," Batman won and we immediately started teaching him to say "I'm Batman" in a super deep voice a la Christian Bale.  We figured that come Halloween night, we could give him a choice between being the Cowardly Lion and Batman - but we were pretty sure which one he would choose.

Look at that smile! 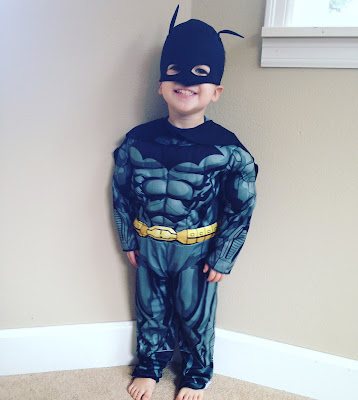 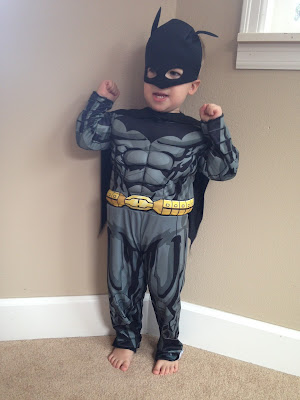 We live in a great neighborhood but it's tradition to go to my parent's house to trick-or-treat. 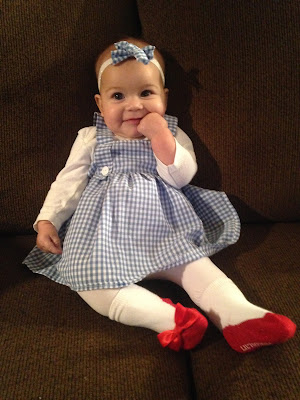 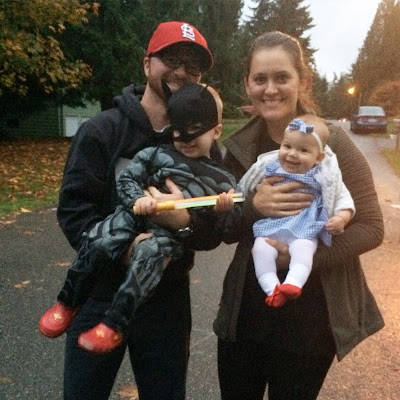 Cam loved trick-or-treating.  He said his "trick-or-treat!" and "thank you!" without being told, and made this really funny, low laughing sound every time he was given candy.  He was cracking me up because after saying "trick-or-treat" he would put his little bucket down on the ground instead of holding on to it and then would run down the driveway, put his bucket back on the ground, and tell Grammy and Papa what candy he got.  If he didn't know what the candy was (everything except M&Ms) he would just yell "I got candies!"

After about 10 houses, we called it a night and headed back to Grammy and Papa's to count his stash. We let him pick one thing to eat and shocker - he chose M&M's.  My own OCD heart leapt as I saw him grouping his M&Ms by color before eating them.

Now to start brainstorming for next year's coordinating costumes.