Because I didn't want to go to Camden's 3-year well check up in a few weeks and continue to tell his pediatrician that he hadn't seen the dentist yet... I scheduled a "happy visit" appointment for the little bugger two weeks ago.

Like an idiot, I scheduled his appointment for 1:00pm - just saying "OK!" to the first appointment time the receptionist threw out at me.  Normally, I wouldn't have missed a beat and said, "sorry, no - that's during nap time."  But for whatever reason - I had a momentary lapse in judgement and didn't really realize what I had done until the day before.

Since he's been waking up at the ass crack of dawn the past several weeks, I knew I could get away with putting him down for an early nap.  But I also knew that would mean having to wake him up from said nap.  I shudder just thinking about it.

I woke him up at the last possible second and he cried the entire drive to the dentist.

We get to the office and he immediately calms down at the sight of a train puzzle and soon after says he has to go potty.  I'm excited by this because it means that (hopefully) we'll get through his dental appointment without having to excuse ourselves.

He sits on the potty and then starts to move around, trying to get "comfortable" on his new perch (since he's used to the potty seat) and he immediately falls in the toilet.  Cam's scream-crying and I'm laughing.  I can only imagine what the receptionists heard at this point.  No doubt he upped the dramatics thanks to being woken up from his nap.

Right now I'm thinking, "we should just cut our losses and leave.  I am just asking for trouble."

Camden gets called back and the sweet lady asked him if he wanted to sit in the robot chair and meet some new friends.  He was intrigued and while wearing some super cool sunglasses, got to meet Mr. Sunshine (the light), Mr. Thirsty (the sucker), Mr. Squirter (the water), and Mr. Spinner (the polisher). 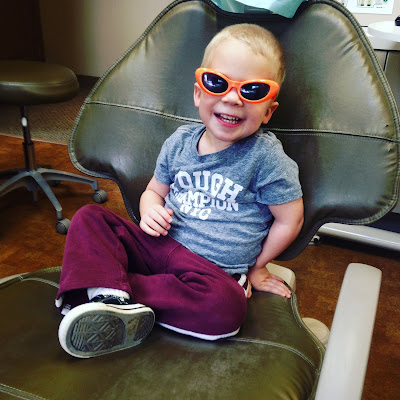 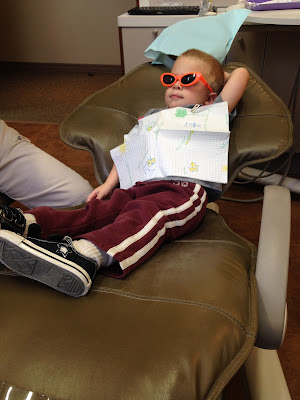 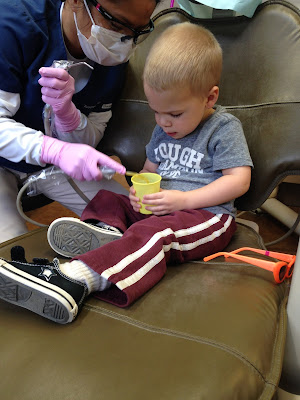 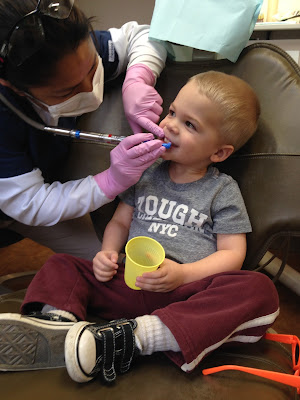 The treatment coordinator introduced Cam to all his new friends then polished and brushed some fluoride on a few teeth.  The dentist checked and counted his teeth and looked at his bite, and we were all done.  A happy visit indeed!  I didn't strike out!

There was no pressure or fear whatsoever and it was a really good first dentist visit for my little dude.  I had to go back this past Monday to get a cavity filled and he said he wanted to go with me.

Let's hope his next visit goes just as well.  And he keeps his heiny out of the toilet.