﻿
So, where was I?
Ah, I blubbering my eyes out to Anna's father-daughter dance song and we fled the wedding reception before our children melted down into hysteria.
Sunday morning was quiet, and again, it felt like all of a sudden it was time to get dressed and ready for church.
Back in June (I think?), we had a FaceTime date with the Webb's and to our surprise - they asked us to be Rory's godparents.  I'm pretty sure I had to pick my jaw up off the floor because I was so surprised and honored.  Tears were shed, for sure.  They were able to arrange Rory's baptism for this weekend so we could be there and not have to make a separate trip.
Camden wasn't so interested in sitting through mass, but tolerated the baptism ceremony decent enough, as long as he was being held by his Grandma Chris.  Not pictured is Zoey who is screaming her head off in the background because sister was hangry.  Bless Ryan's Aunt Cindy who was trying to give her a bottle of formula.  I am pretty sure Zoey was thinking "Who the eff are you and what the eff is this?!" 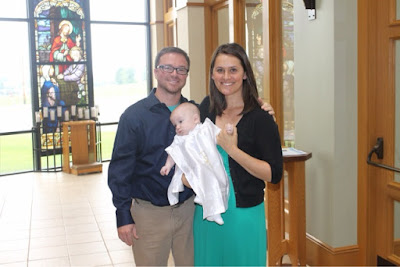 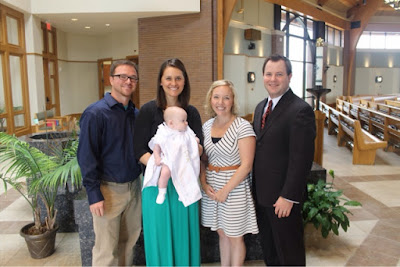 Again with my love for getting pictures of the kids with their great-grandparents.  This is Ryan's dad, Danny's mom, Midge.  She reminds me (physically) so much of my Grammy that sometimes I catch myself staring at her and then feel a little ache in my heart. ﻿ 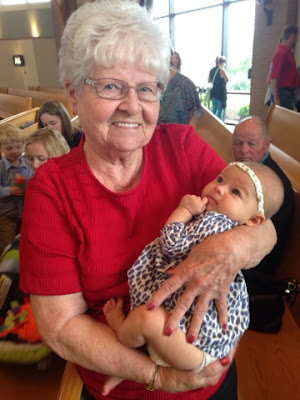 Four generations of Peters!  Not pictured is Camnado.  I think Grandma Chris had taken him to run stairs (I mean, burn off some energy).
﻿ 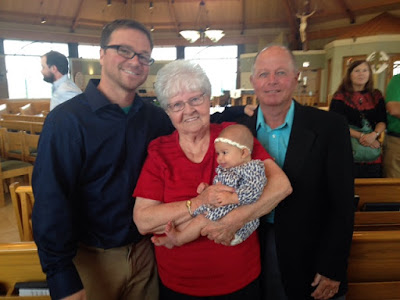 We made it back to the Webb's for Rory's baptism reception.  Cara is seriously superwoman and the hostess with the mostest.  After Zoey took a little nap and I got all our crap packed up, it was time to visit and take more pictures before heading to the airport.
I love this of Zoey Bear with Great-Grandma Carol. ﻿ 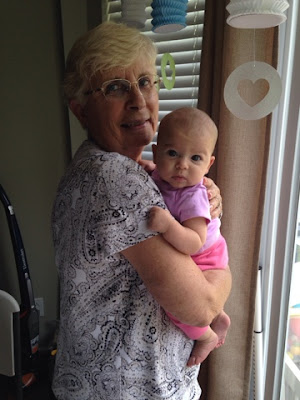 Grandma Chris and Grandpa Danny with Zoey, Camden, Liam, and Rory.  Cara pointed out to me that Liam is wearing two different shoes and I sort of love it.  I suppose that's life when trying to wrangle four kids under the age of four.  At least he's wearing shoes.  My tornado child is shoeless.﻿ 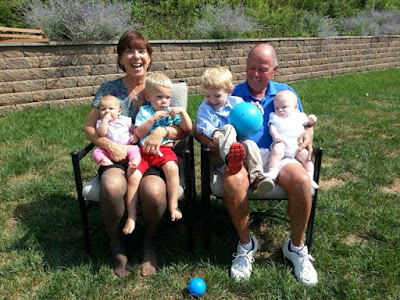 A Peters, Schwartz, and Webb group shot.  This picture is going up in our house somewhere, mark my words.  ﻿ 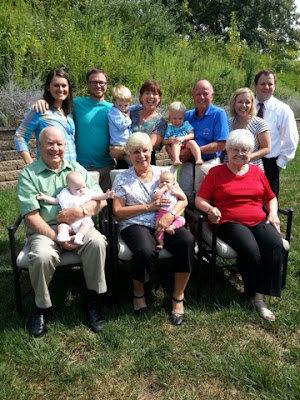 And just like that, it was time to head to the airport.
With the baptism, reception, and needing to leave for the airport, there was no way I was going to get Camden down for a nap.  I was terrified for what awaited us, but we weren't in the car for three minutes and I looked over to see him slumped over in the car seat.  The poor kid slept the 30 minute ride to the airport, through check-in and security, on Ryan until we boarded the plane, and for the first few minutes after we got seated.   ﻿ 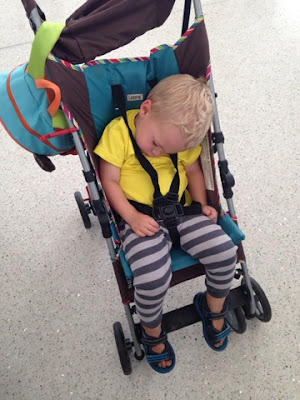 The siesta meant he was awake for the entire flight, but he was super quiet and easily entertained, so I didn't complain.
﻿ 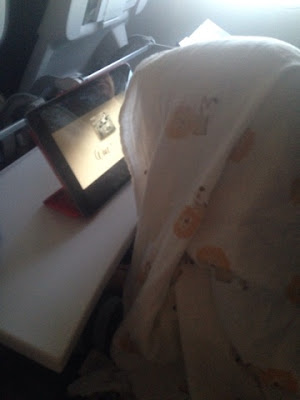 I fed Zoey as we were taking off and then she slept the rest of the flight.  I was worried about how her ears would handle the descent and landing pressure changes in Seattle because I always have a hard time, so like a moron, I woke her up to change her and latch her on.  She did just fine and fell back asleep.It had been several hours since she ate and I didn't want to have to feed her before leaving the airport or have to stop on the way home.
﻿ 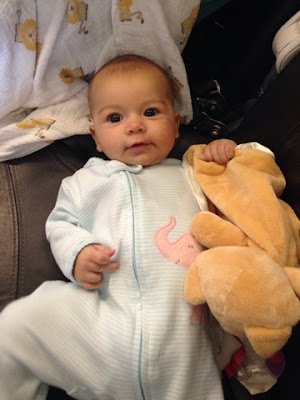 
We got our bags super fast, and an airport employee was kind enough to load all of our luggage and car seats onto his giant luggage cart and help us to the shuttle pick-up island.  It was way past Camden's bedtime at this point and I think he was borderline delirious.  Delirious or not - he didn't overlook that he got to ride the "school bus" again.
﻿ 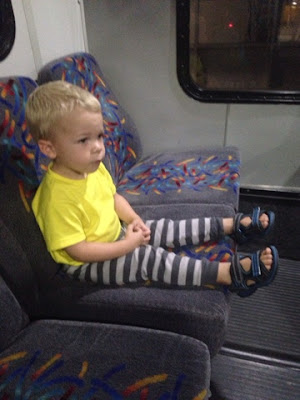 Zoey slept through the whole ordeal and Camden fell asleep about 20 minutes after we left the airport.  By the grace of God he was dead to the world and stayed asleep while I transferred him to his bed.  Zoey on the other hand, was bright eyed and ready to party when I brought her car seat inside so I fed her and prayed that she would sleep until some lovely, late hour of the morning.
I literally fell into bed and said, "We survived" before promptly passing out.
This was a crazy, but wonderful trip.  We were happy to be able to celebrate Anna's wedding and absolutely thrilled that we got to be a part of Rory's baptism.  It is truly an honor to call that sweet, chunky baby our godson.  Thankfully, we don't have long to wait before seeing our favorite Webb's again.  They'll be making the trip to us in a few short weeks.
Take Luck,
LP  ﻿
Posted by Lauren Peters Blog at 9:00 AM